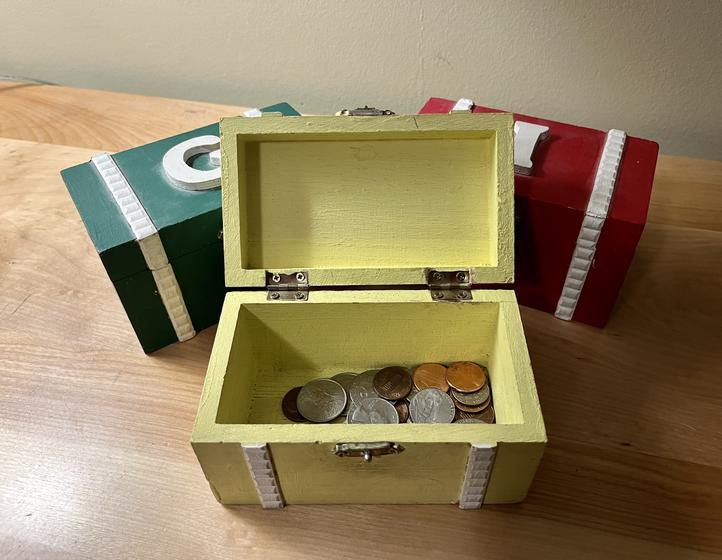 We started the kids on a weekly allowance at age 3. We are so happy we did, and even happier with how we did it. I was reminded of this system when todoist prompted me to "help" this month. I realized I no longer needed to make sure the kids were doing their "quarterly finances" since they're both in college now and (mostly) do this on their own. More on that below, but first let's delve into what we did for the kids from a very young age.

When Elizabeth was two and a half we read an article in Money Magazine about allowance. The author shared her allowance philosophy in the short article. She suggested 3 money pools for kids: spend, give, and save. We decided it made sense to start her on allowance when she turned 3. We also decided we’d add a 4th pool for investing.

Amy went to Michaels and bought 3 little unfinished wood boxes, pastel paint, and 3 wooden letters (S for Spend, I for Invest, and G for Give) to attach to the boxes. Once they were assembled and decorated, they were ready for Elizabeth to start getting allowance.

How much money to give? We determined that $3 each week was perfect. She’d have to learn how to split that into 4 piles and it wasn’t a straightforward split. Starting on her 3rd birthday, every Sunday we’d give her three $1 bills. She traded these in for 12 quarters and then split them between her 3 boxes. She used her duck bank that she got when she was a baby for the Save pool.

Every year our plan was to add $1 per week, so when she turned 4 she got $4 each week, 5 was $5 and so on. As she neared age 10, we decided that maxing out at $10 per week made sense. When she hit her 10th birthday she started getting a $10 bill at her Sunday breakfast table, and she would evenly split it 4 ways.

We followed the same plan for Xander when he turned 3, buying 3 boxes and painting them red, yellow and green. He had a giraffe bank from when he was a baby that he used as his Save pool.

We also did NOT tie allowance to chores. We thought it was important for them to help around the house because it was an expectation of being a part of a family, not because they’re paid for it. If you're interested in doing something similar, there are some cool products on the market like this Save/Spend/Give box, lids to make Mason Jar banks, and purpose-built wooden boxes. However, if you want to make it 100% your own, grab plain wooden boxes from a craft store like Michaels.

When this box filled, we gave it away. The kids chose charities, the food pantry, disaster relief, or another good cause. The food pantry was a nice option since the kids shopped for groceries, figured out how they could maximize what they purchased, and then delivered it to the food pantry for distribution. They even got to help a few times at distribution so they could see their impact on the community. Now, the kids use their credit cards to donate online to charities they want to support.

We found that in some years, the kids spent this quickly, but for the most part, they let it accrue. Excess money went into a starter account for kids at the bank, so it wouldn't burn a hole in their pocket. It’s nice that when the kids wanted something for themselves, or for someone else as a gift, we could ask, “How much ‘spend’ do you have?” They loved using their own money for discretionary items. Some major purchases that the kids were able to make were a cheese mat (for gymnastics), a percentage of a Concept 2 rower for home, and later in adolescence, their own technology and music instrument purchases. They also started buying their own clothes and gifts for their friends when they were in high school.

From the moment they were born, we saved for our kids' secondary education in a state-sponsored 529 plan. When this box filled, we showed the kids how their contribution was added to to plan. It’s a small addition, but an addition nonetheless. Now that they're in college, those funds are being drawn down and their "save" money is their own.

Lastly, the concept of investing was fun to teach. We designated a mutual fund of our own that we could dollar cost average into. We added funds from the kids and earmarked it (using Google Docs) so they could see how many of those shares they owned, at what cost basis, and what the current value was. Our hope was that they grew to see investing as valuable, especially earlier on in their adult lives. Once they were old enough, they got their own investing accounts through Wealthfront and continue to invest the money that way.

As the kids got older they found other ways to make money. They taught music lessons, got paid for music gigs, and enjoyed great jobs at Ithaca's Finger Lakes Running Company. Elizabeth started a pottery business. Add to that gifts of cash for birthdays and money started to add up. Allowance phased out at age 18, anyway. The four-box model lived on, but in a world with bank and investment accounts, remote check deposit, and credit cards. Instead of splitting things up every week, we got into a quarterly cadence using a Google Doc (feel free to copy and adapt) to keep things straight.

At first, I sat with them quarterly and helped them fill it out. Now, they fill it out themselves. Every quarter they use the doc to manage their income, allocating 25% to retirement, 10% to charity, and keeping 100% of cash gifts. Now that they're adults, we think these habits of saving for the future and being charitable will stick.

There are 35 other posts like this one. Here are some other recent ones: