Today, I ran my fastest mile. This past winter, I participated in MITHACAL Miler training sessions. They definitely helped propel me into my spring training cycles, focusing on shorter distances and speed. After Saturday’s Gorges Half Marathon (story coming soon) I was unsure how I’d handle a fast mile at FLRC’s June track meet in Lansing. It’d be my third meet, my first outdoors. I didn't run at all after the half marathon, but did a BodyPump session, yoga, a few hikes and indulged in a sports massage.

I could write a ton more about the evening, but here’s the TL;DR. I finished in 5:17, an 6-second improvement over my prior record at Hartshorne. I was seeded in the fastest heat, knowing after the first straightaway that I was not going to be the first to cross the tape. I was quickly passed by half the field. I focused on running 120-second 400s. I made the turn onto the final straightaway and saw the clock blink past 5:00. I poured every ounce of willpower I had into turning my legs over, knowing that this final stretch would make or break the day. Turns out it made the day.

As so often happens, though, the mile was once again the highlight of the meet. After the gun, the pack settled in behind Scott Dawson for the first lap, with a four-man pack breaking free after that, including 2018 Twilight 5K winner Ethan Seltzer, Joshua Derrick (trying to double from the 2 mile), Cornell University grad student Adam Pacheck (who won both the Skunk Half Marathon and Monster Half Marathon in 2017), and Leon Atkins of the Auburn Pulsars, who ran the 800 in 1:52 for the University of Buffalo. Just past the halfway point, Pacheck took the lead, followed by Atkins, and together they pulled away from Derrick and Seltzer. Pacheck still held the lead at the final bell lap, but Atkins unleashed a ferocious kick to win in 4:32, putting 6 seconds on Pacheck in that last lap even as he was kicking too to come through in 4:38. The race was far from over though. Derrick and Seltzer battled to the line for third and fourth, with Derrick outleaning Seltzer by 0.18 seconds in 4:48. Then, after Jason Tuori cruised in fifth in 5:12, 15-year-old Hayden Belanger of Southern Tier SOAR barely nipped 37-year-old Phil Kwasney of STRC by 0.41 seconds in 5:14. And then, Scott Dawson — remember him from the first lap? — ended up running a 1 mile PR in 5:17 just days after running a half-marathon PR with an 8th place finish in the Gorges Half Marathon.

This is where the shoes come in. I don’t often think about the clothes I wear or the shoes I slip into, but after this race I did. Ian Golden offered these as a discounted option a few years ago at Finger Lakes Running. I was buying other shoes at the time, and he brought them over and said, “Here, try these.” I bought them, mostly because I thought they looked cool and the price was right. I foolishly wore them for a marathon, during which a hotspot chafed my foot and I put them in the closet for many months. Then the MITHACAL Milers training started, and they were perfect for short distances in Barton Hall. They’re also the shoe I reach for when I go to FLX Fitclub for BodyPump. They’ve been on my feet for each of my mile races. Looking back, I’d have to say they’ve turned out to be a pretty special pair. They may have started off on a discount rack in a specialty running store, but they’re looking pretty sharp now. Here’s to many more miles in these shoes. They have more stories to tell.

So yeah, shoes. Sandals. Boots. When you buy them, their stories are yet to be woven and told. It's an intriguing thought: everything starts at zero. A blank slate. A car with zero miles. A notebook filled with blank pages. New shoes with perfect, shiny treads. What stories will unfold when you travel, write, draw, or run? 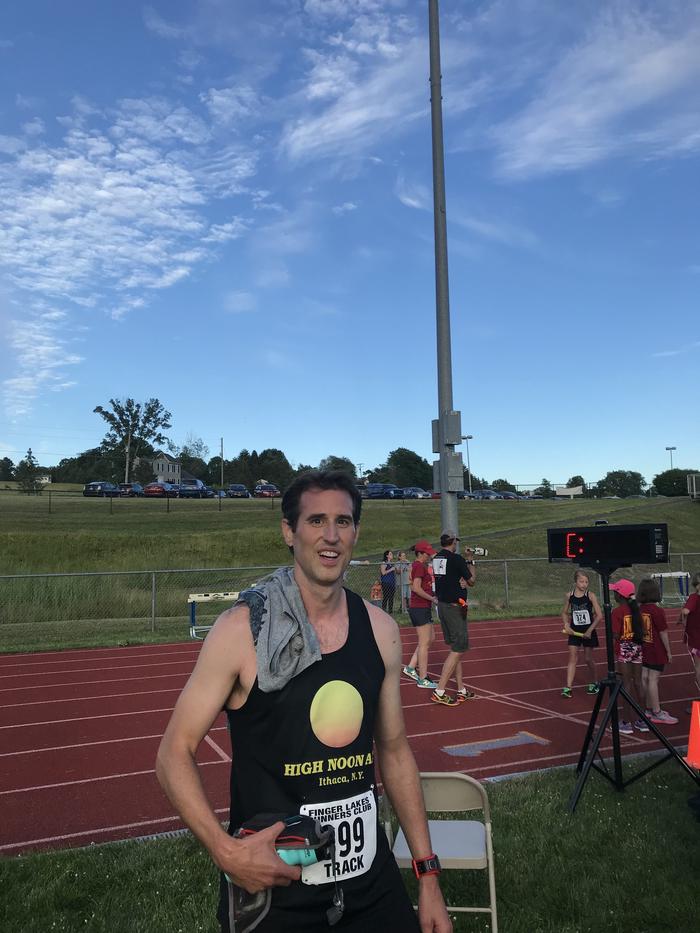 Many thanks to Aaron Proujansky for the post-race snap!