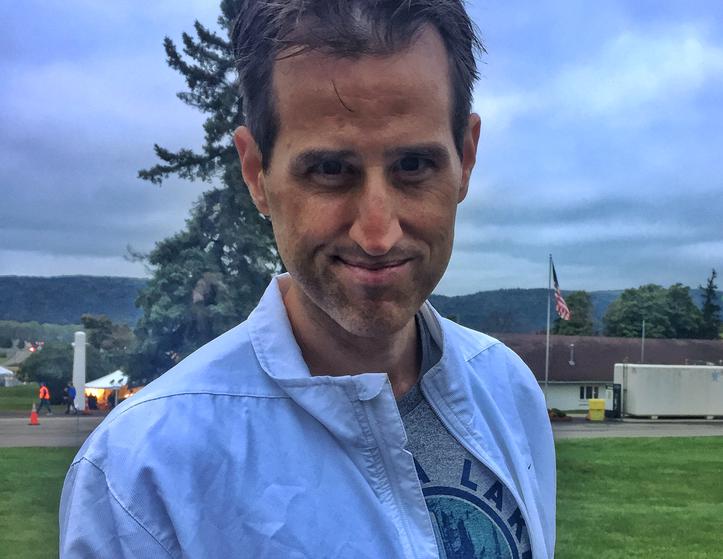 For my own mental health, I should just eliminate the term "BQ" from my vernacular. After all, it's just TWO letters! Let 'em go. As a runner, it's not that easy. For me, a Boston-qualifying marathon time would mean something really special; that I was in a special group of marathoners who had "made the cut." Despite the fact that I classify myself as a "casual" runner (after all, when you factor in work and parenting, I'm really running 25-30 miles a week during PEAK training), I had this lofty goal of having my third (healthy) marathon be the BQ charm.

Amy and I arrived in Corning on marathon morning in time for a stress-free parking experience and a quick walk across the bridge to the buses that would carry us to Bath. We enjoyed chatting with a few runners as we waited in the quick-moving line. Once on the bus, I said to Amy, "You know, one of four things will happen to me today."

I didn't think much more of it, but I had resolved to stay with the 3:15 pacer the whole race, guaranteeing me at least my secondary goal. We were at the start area early enough for a few trips to the bathroom, to check our drop bags with UPS, and to wish each other good luck.

I lined up just in front of the 3:15 pacer, and behind the 3:05 pacer. I decided in the moment that I'd check out how I was feeling, and NOT go out as fast as I did last year. Once the race was underway, I settled into a ~7:15 pace, about 10 seconds per mile faster than the pacer. This would put me into the finish with about a 3:12, which would make my first goal. I enjoyed a few running partners during the first half of the marathon, most notably a guy from Denver who was, like me, not running with music. We chatted about running and skiing, and mostly dialed ourselves into what were some pretty consistent splits.

It was 60s and humid, and while it was comfortable, I felt the need to get water at each aid opportunity. At mile 18, though, something started to feel "off." Like history repeating itself, I started to cramp up and grabbed some Gatorade at the next aid. I did some quick calculating, and despite my pace dropping, I could still keep my secondary goal in sight if I could just keep going. I just had to keep my average pace above 7:27. I walked through aid at mile 23, and then tragically had to step off the course at 24 and 24.8 to stretch my legs. My hamstrings and quads were really straining, and I felt that one wrong move would seize at least one of them. Stretching became a means to the finish, quite literally.

The last two miles of the race were some of the hardest running I've ever done. Legs so tight, finish so close. I set my sights on outcome #3, a PR, and managed to pick up the pace to a 8:50 for the final mile. I loped into the finish chute, pained, with a 1:51 PR over my prior best. I didn't linger at the finish, as I was in such discomfort every cell in my body was yearning to lie down; to be home.  Amy had her first DNF, and I was so sad to see her at the finish when I came in. I've DNF'd before, and I felt sad knowing what emotions she was feeling. Amy was a great driver getting us back, after which I crashed and napped for awhile. The hot tub at the gym was a nice recovery later in the afternoon, too. Top it all off with a delicious dinner at Viva, and the day was complete. I managed to stop beating myself up about the BQ, and relished in the PR that I had.

Qualifying for Boston is One Tough Nut

After all, I still love to run, and that's not going to change anytime soon.

UPDATE: Shannon, a fellow runner, told me something I didn't know after reading this post. The qualifying times are based on your age when you'll run Boston, not when you qualify. I did not know that! The BAA web site says "qualifying times are based upon each athlete's age on the date of the 2018 Boston Marathon (April 16, 2018)." So ... if my birthday was before April 16 (it is in July), I would have qualified for Boston 2018 with THIS run! Interesting ... still, perhaps a year off from marathoning would do me good!