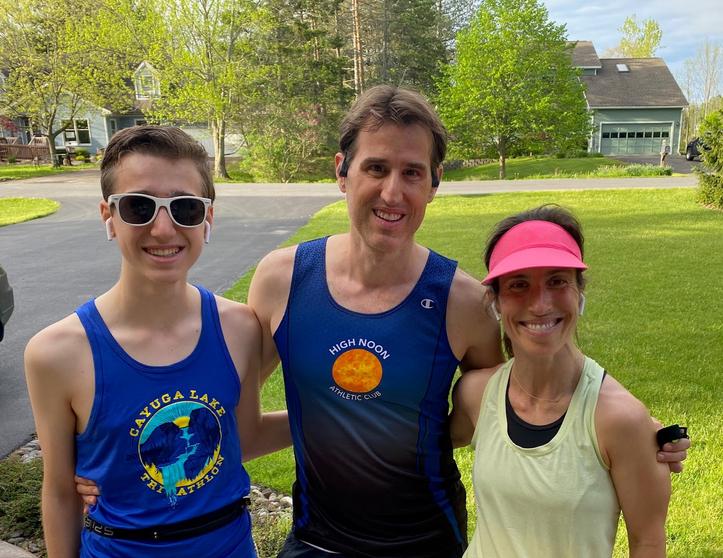 I wanted to quit after just about 24 miles of running. It wasn’t a fleeting thought. No, it was more of a persistent message issued from my shredded legs. My brain was clearly playing off the same sheet of music, too. I’d been teasing myself the last few miles with mental images of the remaining distance as I ran the slight downgrade of the Black Diamond Trail. “C’mon, Scott. Just your normal 5-mile out and back left.” And then, “Hey, it’s just the three mile loop. You can do that, right?” But now, the prospect of my “quick” 2-mile loop held no allure. I had nothing left to offer.

We hatched our plan to run a local marathon distance after our Memorial Day plans were scrapped due to the coronavirus pandemic. We had planned a weekend trip to California to run in the “Mountains 2 Beach” marathon, mostly because the minimum age would allow my son to compete. He’s 16 and wanted to run his first marathon. As a bonus, the race had a half-marathon distance that my daughter could do. With those plans scuttled, though, we looked back at our training plan. We’d been following it since early January. When we got the stay-at-home order, right around March 16, we were literally halfway through our 20-week plan. Running is one of the safest things we can do while somewhat locked down, so we kept the training going. 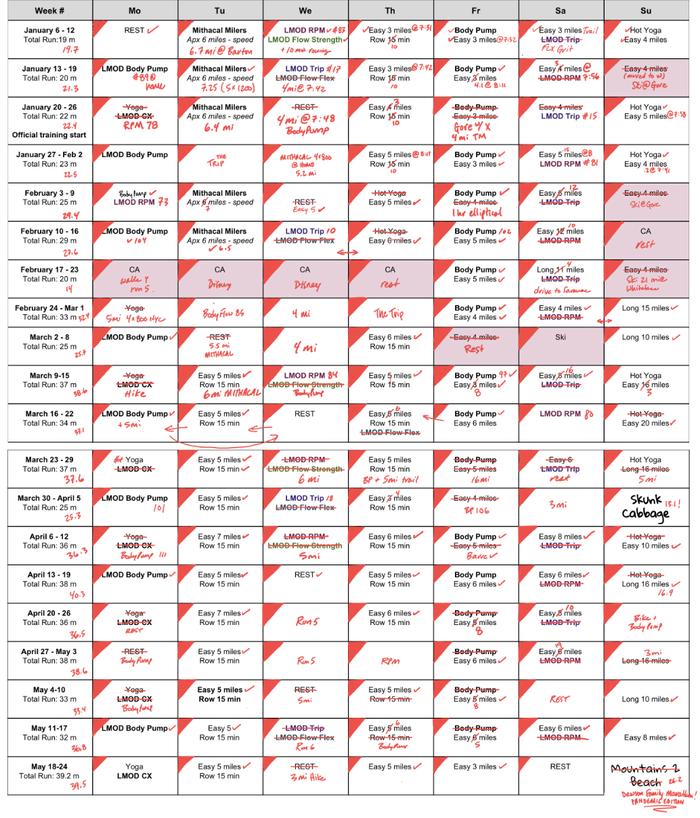 As luck would have it, the weather for our marathon was ideal. The morning called for overcast skies and temperatures in the low- to mid-60s. Amy and I woke up at 4:30a and I enjoyed a homemade “everything” bagel (thanks to Elizabeth’s mad baking skills) with peanut butter at 5a. Amy planned to start a little earlier than Xander and me so we’d finish around the same time. 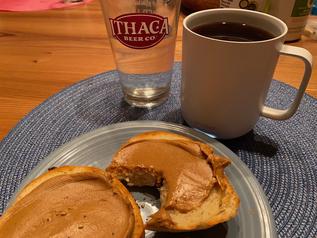 As we prepared our things after Amy started her run, I shared with Xander how weird it was to think about what our weekend would have been like without a pandemic. We’d be waking up in Ventura, bused to the start of the race in Ojai, and running a marathon in the California sun. We’d hop a flight back to New York in the evening, returning home in time for him to march and play saxophone in Trumansburg’s Memorial Day parade. Our house may very well have been rented out for Cornell’s graduation, as has been our custom for years. Instead, we were well-entrenched in our weekly routines of school and work, with no solid markers of time to let us know that Memorial Day weekend was approaching. Yet, here she was.

We finished getting our things prepared as Amy came back to the house after 5 miles. We grabbed a quick photo before she resumed her run (see this post's top image).

I planned my marathon in two parts: 15 miles up near my home in Trumansburg, followed by 11 miles to Ithaca on the Black Diamond Trail. For the first portion, I thought that routes of an ever-increasing distance would help me get to 15 without getting too bored or overwhelmed. It was time to run! I staged water on my front porch, two Honey Stinger gels, and a buff and handheld for the trail portion. After stretching my legs out for a few minutes, I was off!

My legs felt so fresh for the first mile. After the taper in my plan, I was clearly ready to go. I did our standard 1-mile loop south of the house (1.25, actually) and bypassed stopping to continue on our standard 2-mile loop north of the house. I was out again for our standard 3-mile loop after a quick stop for water, and then headed out farther for 4 miles on the Curry/Searsburg loop. I had my first gel after that, having run for just over an hour. My final run in Trumansburg was an out-and-back on Congress Street Extension. Back at the house, I took a quick break to pee. I grabbed my buff and Nathan handheld and continued down Rabbit Run toward the Black Diamond Trail at the top of Taughannock Falls State Park.

Three miles later I was at the road bridge that crosses Taughannock Creek at the top of the park. I walked for a few seconds to ingest my second gel of the day, and was soon on the tree-covered Black Diamond Trail. Eight miles to go. With six miles to go, I saw Elizabeth waiting at one of the road crossings for Xander. She had water for him, and she shouted encouragement to me. I was starting to feel really sluggish and my demeanor totally conveyed that. Miles 20+ of a marathon for me are always the hardest, and my pace slackened by at least a minute per mile. In fact, I’d been steadily slowing for the entire run, having started out with enthusiastic, fresh legs that were now exhausted. There were no crowd-filled intersections. No “power up” signs. No water stops stocked with enthusiastic volunteers. I just wanted it done.

I crossed paths with other walkers and bikers, raising my buff each time to cover my nose and mouth. I was grateful that the trail wasn’t more congested since the buff was uncomfortable. It was nice to only have to raise it for 30 seconds at a time. At this point, we’ve caught up to the introductory paragraph of this post. I was no longer having any fun. The miles felt slow, painful, and mentally taxing. Not altogether unexpected, but unpleasant nonetheless. I found myself buoyed by the advice I’d given Xander before the run. Being his first marathon, I advised, “Hey, I’m really proud of you. You’ve got this. That said, you’re going to get to the point where it hurts, where you don’t want to keep going. It’ll happen, so be ready for it. When it does, remind yourself that it’s temporary. It’ll be over. Just keep putting one foot in front of the other.” Man, I needed my own advice just then. I passed Amy with just over a mile to go, and told her I was hurting. I had just finished my water, too, and unscrewed the lid to pour the remaining drops in my mouth. I kept putting one foot in front of the other. I was not going to stop. Not until my watch ticked past 26.2 miles.

And then it did. I was done! I abruptly stopped running and started making forward shuffling progress toward the end of the trail. Amy caught up with me shortly and told me that she was done. We walked together but I wasn’t a very good conversationalist. I felt out-of-sorts and was really thirsty. I called Elizabeth on the phone as she waited in the Cass Park parking lot for us. “Can you walk some water into me?” I asked. “Mom and I are done, and we’re walking the rest of the way.” I was so grateful to see Elizabeth shortly after the call. I sat down on the edge of the trail and pounded back a half liter of water. After arriving back home, I’d find out the cause of my malaise: I was pretty dehydrated. I’d lost 7 pounds of water weight during the run, and that little Nathan handheld was no match for 11 miles of effort. You should have carried more water, sir!

We finally made it to the end of the trail. All I wanted to do was lie down in the shade of a small tree while waiting for Xander to finish. He wasn’t far behind me, and my family relished in making some light of my plight. 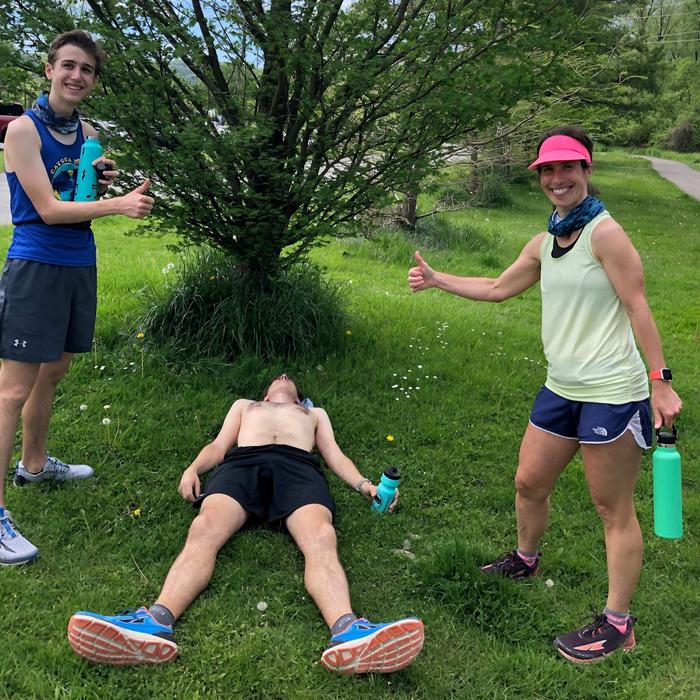 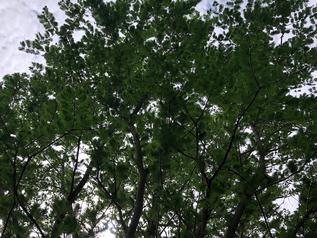 My view, looking up

This was my view of the tree, sunlight filtering through the branches. As I started to feel moderately better, I felt grateful. Grateful that Xander had finished his first marathon, coronavirus be damned. Grateful that we lived in such a beautiful area. And grateful that I was able to finish my fourth marathon, despite the difficulty of the finish.

We’d ordered post-race Pinesburgers from Glenwood Pines in advance. Shortly after we got home, Elizabeth and Amy cleaned up and headed out to pick them up. I had a delightful shower and prepared pink lemonade smoothies to go with the burgers. The day may have lacked the allure and energy of a destination race, but as backyard marathons go, I think we did it fine. Just fine.

This was my fourth marathon, and I was happy to see that it was my second-fastest, less than a minute behind 2016’s Corning Wineglass. I’m really happy that I was able to push myself as hard as I did without crowd support or the adrenaline that accompanies a big race. Now, that all said, let’s get back to normal, shall we?