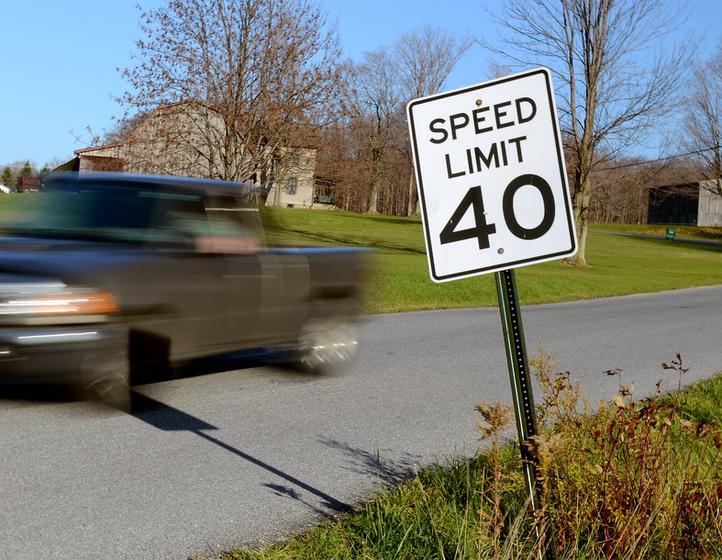 I'm no stranger to close encounters with drivers who either don't understand the rules of engaging with pedestrians (runners or walkers), or don't care about the rules. When running on the road, I rarely zone out, constantly scanning for threats to my safety. On today's eight-mile run, just a mile in, that threat was straight in front of me.

Here's the setting: I'm running on the left side of the road, on the white line. There's no sidewalk on this stretch of road. There's snow and ice in the narrow gravel shoulder to my left, so I'm as far left as I can be to run safely. An older-model pickup truck was coming toward me in my lane. There must have been traffic in the opposing lane, since he braked and stayed in his lane (as he should have done). However, he threw his hands up in the air in disgust and yelled something I could not discern through his closed windows.

I ambled past the truck, the driver glaring at me the whole time, and then he accelerated off, still animated with his hands, looking at me in his rear view mirror. I stopped and turned around, and he stopped his truck. I was so shocked by his reaction to a pedestrian causing him to stop briefly that I put MY hands in the air and yelled, "I have the right of way! You needed to yield!" I'm not sure he heard me or not, but he drove off and I thought that was the end of it.

Two miles later, I'm approaching the center of the village and then the same pickup truck turns onto the road where I'm running, again driving in my direction. He sees me, pulls abruptly into the closest parking lot, and GETS OUT OF HIS TRUCK. I'm thinking two things here: first, I'm glad we're around other people, and second, where is this headed? He speaks first, yelling across the road.

"You could get hit that way, not getting off the road when a car is coming. All you had to do was jump into an inch of snow and get out of my way", he continued.

Irked, I replied, "The only type of person that's going to hit me is someone like you."

I then noticed that the parking lot we were standing in was for the police station and village offices. Perfect. I suggested we take up the matter with the authorities, and he told me that he was on his way to do that anyway. He was seriously going to tell a police officer that there was a runner out there, not jumping out of the way of oncoming traffic, who had a death wish. He was asking them to go find me and save me. Oh. My. Gosh. As we walked inside, I told him that it'd be good to straighten this out, that I might learn something (I was certain I was right, though). He offered the same, that he might learn something too. At this point, I was just grateful that the conversation hadn't devolved into a deeper altercation.

Police were all out on patrol, so a village clerk called one in. While we were waiting in the vestibule, I asked, "What's your name, sir?" He gave me his first name, and when I asked for his surname, he replied curtly, "I don't think that matters."

I extended my right arm to shake his hand, introducing myself.

His face warmed immediately, and then he quickly offered up his full name. We KNEW each other. He was involved as a parent in scouting when I was growing up. I know his son very well. This just got a lot more interesting. He didn't know I had moved back to the village where I'd grown up. We exchanged several more minutes of idle conversation, and it became clear his concern had morphed into concern for my well-being, and less about his inconvenience at having to stop. In short order, a police car arrived and an officer heard his appeal.

The officer responded the way I thought he would, and it was beautiful. What could have been a parking lot fight was elegantly turning into a one-on-one educational session on a driver's responsibilities and obligations when interacting with pedestrians. The officer explained that as a moving pedestrian, I had a legal right to be in the road, as far left as safety allowed. The onus was on the driver to slow or stop to avoid an obstruction in the driver's lane. Additionally, if that obstruction was to cause the driver to swerve into oncoming traffic, that driver would be cited at fault for causing that accident. The only cases where the onus was on the pedestrian was if I was entering a crosswalk without warning, too quickly, or turning from one street onto another without yielding.

The driver asked once more about how hard it would have been for me to get over into the snow when I saw him, which was an opening for me to tell him a few things.

We also talked about bicycle safety, since that was a concern of his. Of particular concern were bikes that ride two abreast taking up the whole lane. I was interested to learn that this was legal: if a cyclist can maintain a speed +/- 15 mph of the posted speed limit, they may take the lane. So, in a 30mph zone, a cyclist riding 15-20mph is within their rights to take up any part of the lane, and drivers must yield.

Before long I was back on the roads, continuing my run. I thought about the encounter for much of that run, and just how wonderful it was that something that could have been quite confrontational had turned into something educational. I didn't get an apology from the driver, but I did get satisfaction from him learning a thing or two. Who knows, it might help another runner down the road.

Pedestrian and cyclist safety continues to be a big concern, and both pedestrians and drivers bear responsibility. I'll cite some statistics from the NHTSA on pedestrian fatalities and injuries from 2012, the latest year for which statistics are available.

In 2012, 4,743 pedestrians were killed and an estimated 76,000 were injured in traffic crashes in the United States. On average, a pedestrian was killed every 2 hours and injured every 7 minutes in traffic crashes. The 4,743 pedestrian fatalities in 2012 represented an increase of 6 percent from 2011 and were the highest number of fatalities in the last 5 years. — National Highway Traffic Safety Administration

In addition to this sobering statistic, I looked up a thing or two about pedestrian and cyclist safety. I found that the guidance may vary from state-to-state, as the National Highway Traffic Safety Administration notes:

Each State should develop and implement a comprehensive pedestrian safety program that promotes safe pedestrian practices, and educates drivers to share the road safely with other road users. — Highway Safety Program Guideline No. 14

For New York State, the relevant parts of the law for this discussion were as follows, first from the driver's perspective:

Drivers to exercise due care. (a) Notwithstanding the provisions of any other law to the contrary, every driver of a vehicle shall exercise due care to avoid colliding with any bicyclist, pedestrian, or domestic animal upon any roadway. — New York State Vehicle and Traffic (VAT) Code, Title 7, Article 26, Section 1146

And then from the pedestrian's perspective:

Pedestrians on roadways. (a) Where sidewalks are provided and they may be used with safety it shall be unlawful for any pedestrian to walk along and upon an adjacent roadway. (b) Where sidewalks are not provided any pedestrian walking along and upon a highway shall when practicable walk only on the left side of the roadway or its shoulder facing traffic which may approach from the opposite direction. Upon the approach of any vehicle from the opposite direction, such pedestrian shall move as far to the left as is practicable. — New York State Vehicle and Traffic (VAT) Code, Title 7, Article 27, Section 1156

Of this last section, I was most interested in the term "when practicable", as I think this terminology would have resulted in a lively debate today. Should I jump to my left at every oncoming car? Was that practicable? Certainly not on the stretch of road I was running, and there was no sidewalk, I'll add. However, it seems that the Drivers to exercise due care terminology trumps all.

Please share this with others if you found it helpful!