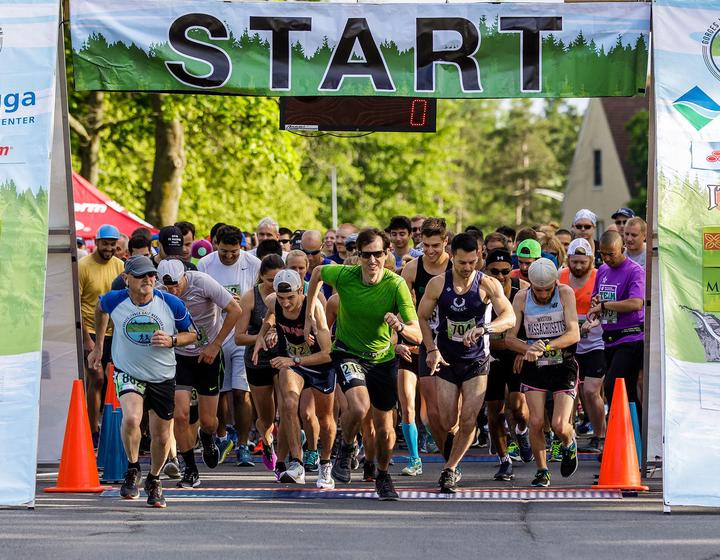 This year, the race offered buses to take racers from the finish line to Cayuga Medical Center. The race course has changed most years for a variety of reasons, so CMC was a new start line this year. No parking would be available nearby. We didn’t want to get into Ithaca pre-race in time to get a bus, though, so we hatched an alternate plan. Friday night, Elizabeth, Amy and I worked out at FLX Fitclub. Amy and I did BodyPump after Elizabeth did BodyAttack. While we pumped, Elizabeth helpfully picked up our bibs, grabbed some takeout Thai food, and shopped at Wegmans. Then we “stashed” our Subaru on a side street near the finish so we’d have it post-race.

I had my typical pre-race breakfast of an “everything” bagel with peanut butter. Since the race kicked off at 7:30, I feasted at 5:30 so I’d have time to digest. I went on a run with Jason Tuori Friday before BodyPump, and he raised his eyebrows when I told him I was having red curry for dinner the night before the race. I hoped that the spicy dish wouldn’t react poorly with the savory bagel. I haven’t had a problem in the past, but hey, you never know!

My father-in-law picked us up at the house to drive us the short distance to CMC. A few other runners were there milling about, but buses has not yet arrived from Ithaca. We each took turns in the porto-potties as the buses pulled out, unleashing hundreds of runners in a matter of minutes. Instant lines! I ran around the parking lot a bit to warm up, chatted up some friends, and jumped my nervous self into another porto-potty line for a delightful 20-minute wait. So many others had similar pre-race intentions that they delayed the start of the race by 15 to 20 minutes.

Want to know what almost 1,000 runners looks like? Here's social media maven Elizabeth taking video of the pre-race crowd. Amy and Xander are in the opening of the shot.

I lined up right in the middle of the start line. Not intentionally, by any stretch, but more so because nobody else was there. I love the feeling of jumping off that start line! Alex Kleinerman, who helped organize the race, shot this video of us starting. 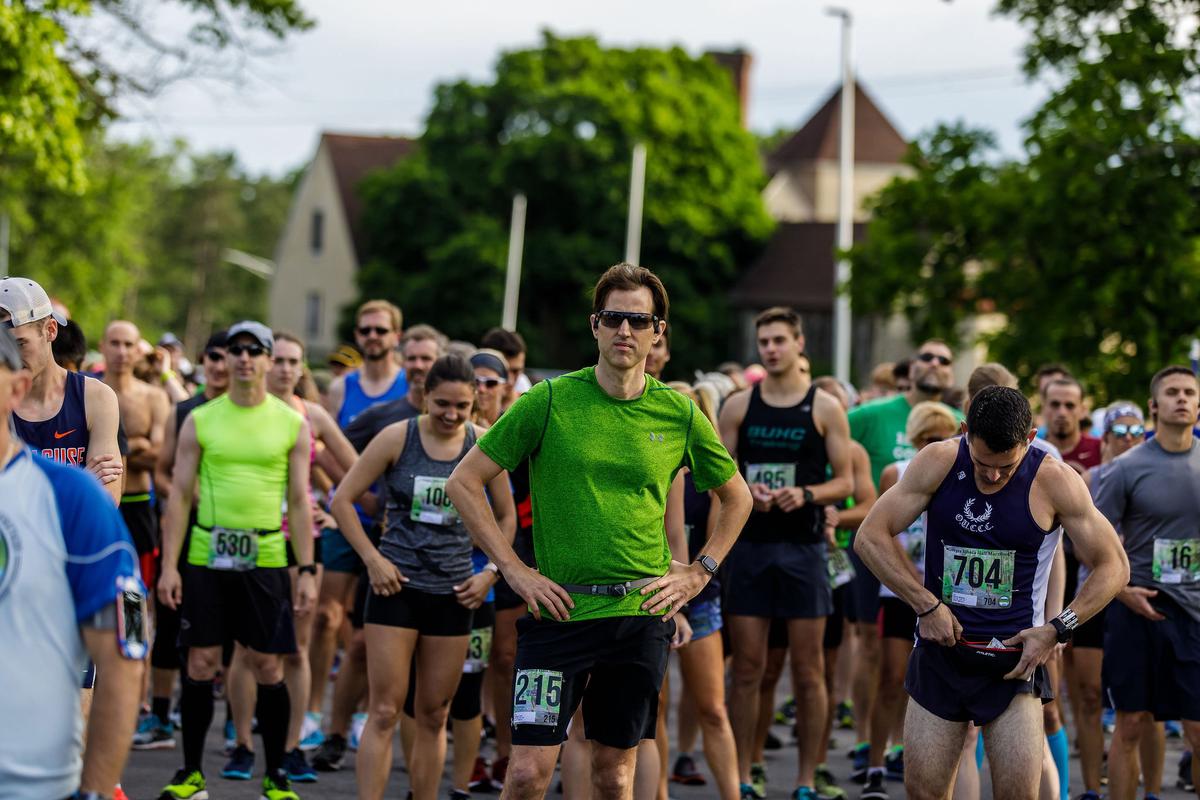 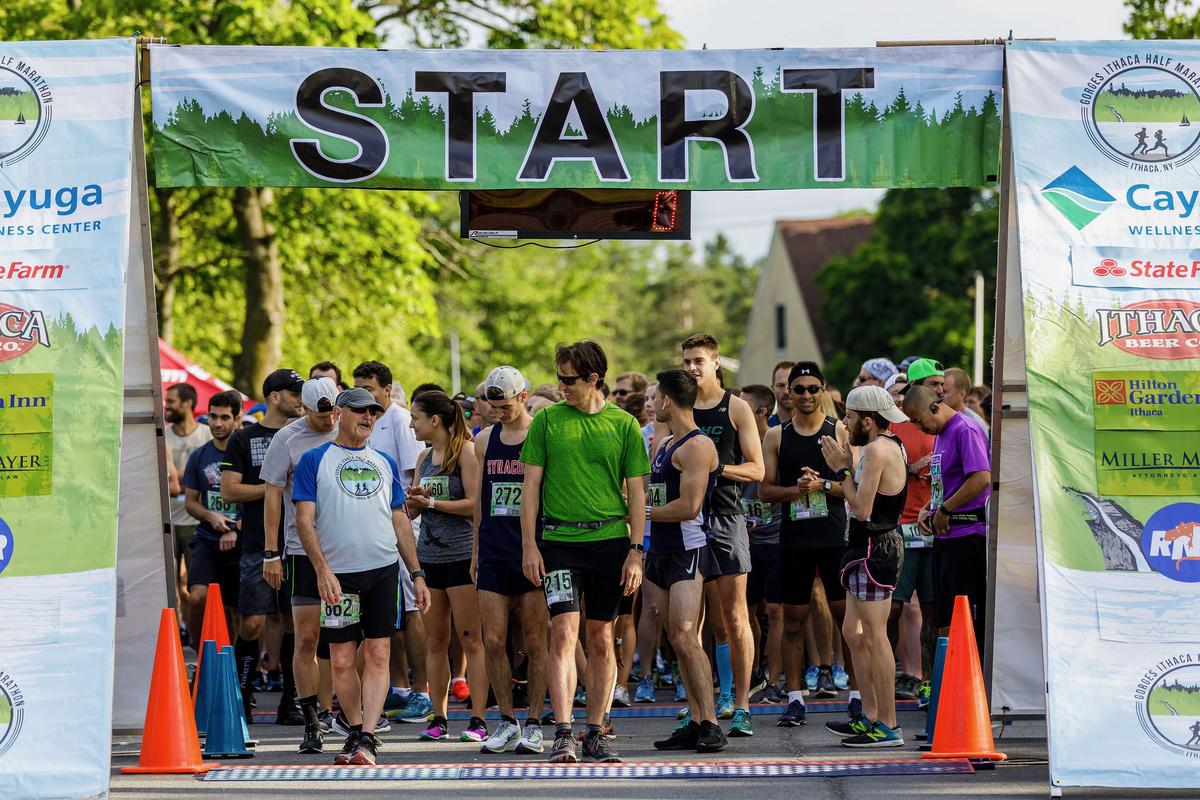 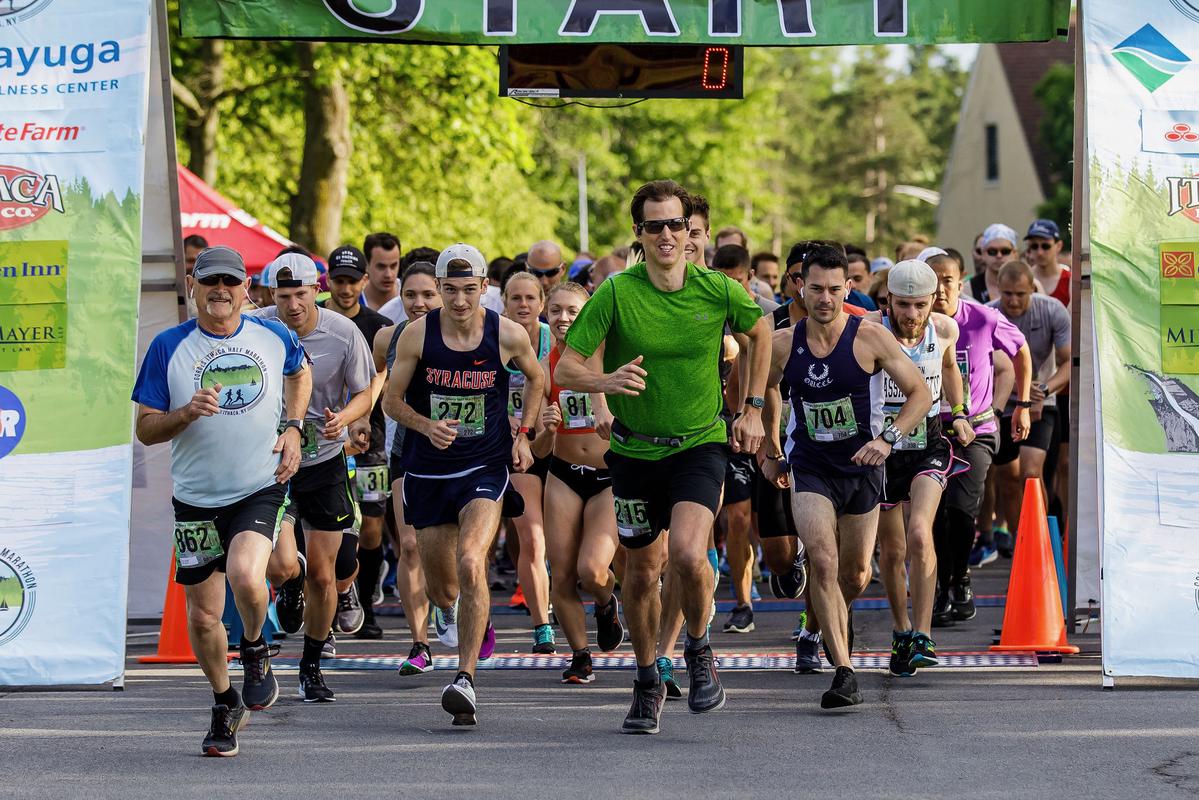 The pictures tell the tale: it was a crisp morning evolving to a beautiful day, and I felt buoyed by the 889 runners behind me. Since I had a nice spot right up front, I made an animation of the start using some of the fantastic pictures from Goat Factory Media Entertainment.

I made the first turn of the race in the lead as we circled the CMC parking lot. Faster runners started to pass me, and by the time we were heading uphill on a short stretch along Indian Creek Road, I was settling into my pace. We turned right onto Dubois and started a northbound stretch. Last year’s course started on Dubois, but farther north than we’d run today.

As we ran along, I noticed a side stitch in my right abdomen. I was suddenly jealous of the runner to my left who was carrying water. He asked how I was, and I looked far ahead at the leaders. “I just hope I see them turn soon,” I said. I longed for the shaded protection of the Black Diamond Trail and the promised aid station shortly after mile 3. There’d be water there for my worsening cramp. It was nice to see Steve Ryan helping at an intersection in these early miles. His friendly smile and encouragement distracted me from my cramp for a moment.

Ah, blissful shade! After a short stretch turning right on Perry City Road, we hooked up with the Black Diamond Trail. I was happy to have the familiar packed gravel underfoot. The first aid station loomed like an oasis ahead. I saw Jody Latini near the beginning of the aid station, and I apologetically took two glasses of water from her as I ran by. One shot, two shots, quick as a whistle. I managed to get most of the water down and prayed that it’d dissolve my cramp.

I focused on breathing slowly and intentionally, despite the quick pace. The trail would soon be a memory and I intended to enjoy it as much as I could. In the next few minutes, I felt my cramp abating. These four blissful miles were the best of the race, and my pace was indicative of that. I felt even and smooth, notching 6:29, 6:29, 6:24, and 6:25 for the 4-mile stretch.

Ron Heerkens captured me from behind his lens shortly before the trail spit me out onto the Case Park’s sun-soaked blacktop trail. 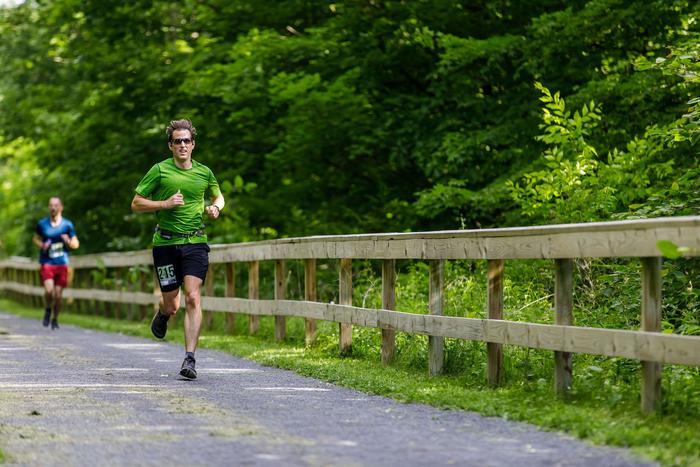 I really dislike the transition from Black Diamond to Cass. Almost exactly where mile 8 begins, the race changed dramatically. No more downhill. No more shade. My per-mile average dropped by a full minute for the remainder of the race, starting right here. The crowd support at the turn was incredible, though, and there was a ton of cheering and encouragement. I grabbed a high-five from Jon Shaff. I almost missed the right turn after the ice rink, and was grateful for the spectator who hollered at me to turn.

I really started feeling the effects of the warming day on my body. It felt like drudgery as I made my way along Ithaca’s inlet toward the Route 89 bridge. At least it was pretty out. I also looked forward to seeing some familiar faces outside of FLX Fitclub, just about a mile away. The turns would be quicker in this half of the race. No more sweet 4-mile stretches like the trail! I grabbed a water from Zeb Whitford at a station along the waterfront trail. He’s a really tall guy, and it gave me great pleasure to reach up to give him a high-five. The crowd at FLX Fitclub, just outside the club and adjacent to the Cornell and IC boathouses, was super supportive and fun to pass!

As I approached the bouncy footbridges marking the entrance to Stewart Park, aid station workers were handing out fresh strawberries. They were so good! I had a tough time chewing and running, but gratefully they positioned the strawberries about 100 feet BEFORE the water. I was able to wash down my delicious strawberry and hit the loop around Stewart without a problem. My cramp was a distant memory now, so I felt like I was doing a good job staying hydrated.

I ran into a little course confusion after I high-fived Joe Reynolds at Stewart’s railroad tracks. The runner before me went around the wrong side of the Ithaca Youth Bureau building. I blindly followed. It didn’t make a material difference in distance, but I felt bad.

I was all alone as I ran past Boynton and Ithaca High School. A young lady held a “Power Me Up” sign along Lake Street. She had it facing the road instead of the runners, but I knew what it was and gave it a solid, satisfying smack. She’d get a lot more takers as more runners came through! Rich Heffron came bounding out of his house on Falls Street and shouted much-needed encouragement. Have I told you how awesome runner friends are? They are. 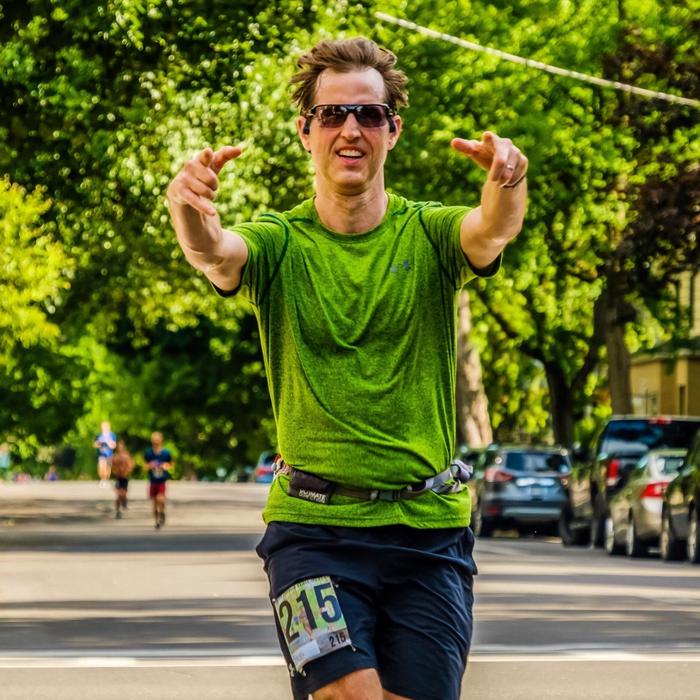 I made the final turn of the race and started counting down the intersections to the finish. This last mile felt slow, but there were plenty of friendly faces and clapping spectators. I got encouragement and high-fives from Aaron Proujansky and Scott Ulrich, both volunteering their time to keep us safe in the intersections. 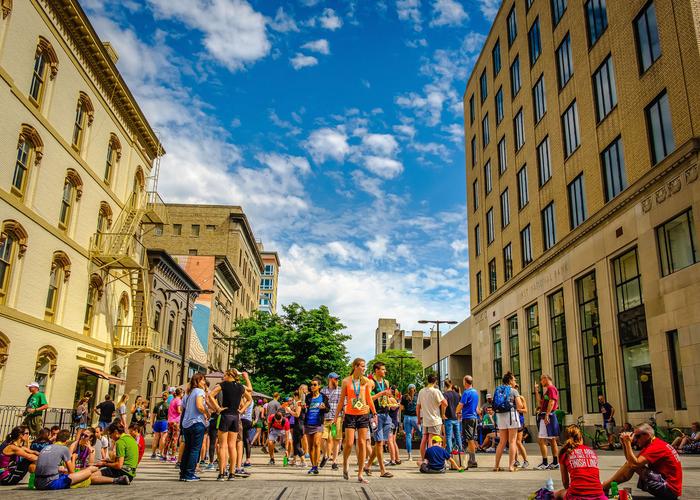 As always, post-race is the best. I walked back along the course and took up a shady spot in front of City Hall to encourage runners. Xander came by, finishing a strong race for him. Amy came by, and then Elizabeth. It was time to get the Commons for socialization and refreshment! We enjoyed homemade energy bars from CMC (a favorite recipe) and more delicious strawberries. I met one of our favorite Viva Taqueria bartenders, Ben, and we chatted about the race. Fitnell Farms catered a delicious lunch (at 9:30a, though, it’s brunch!) and Amy and I enjoyed some cold Ithaca Beer. 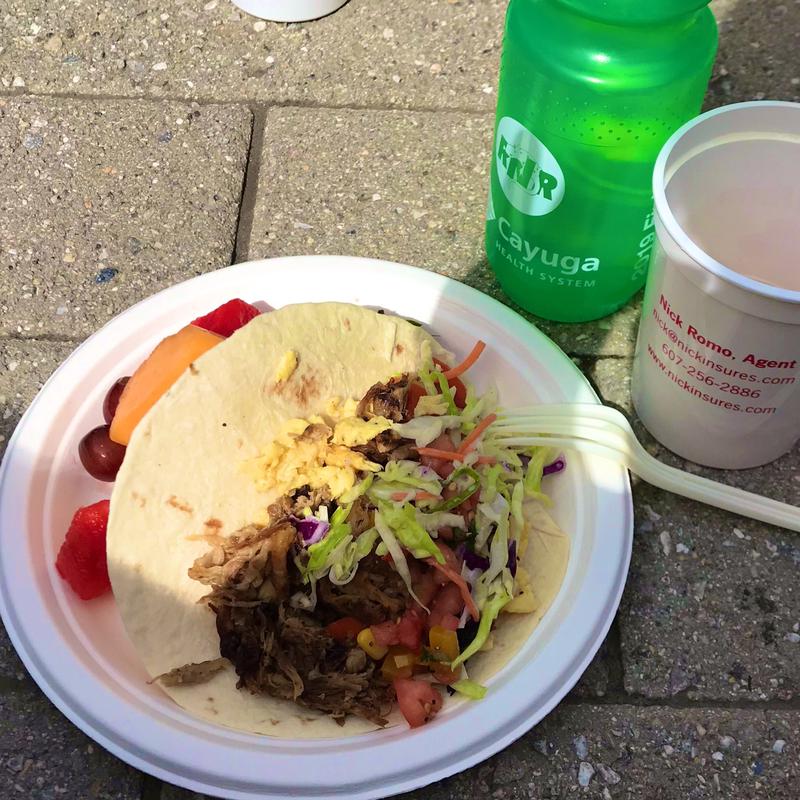 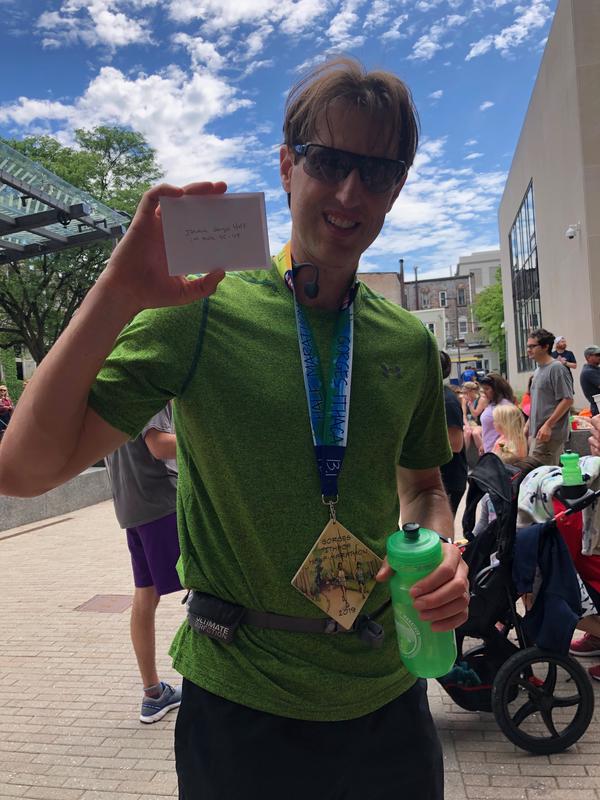 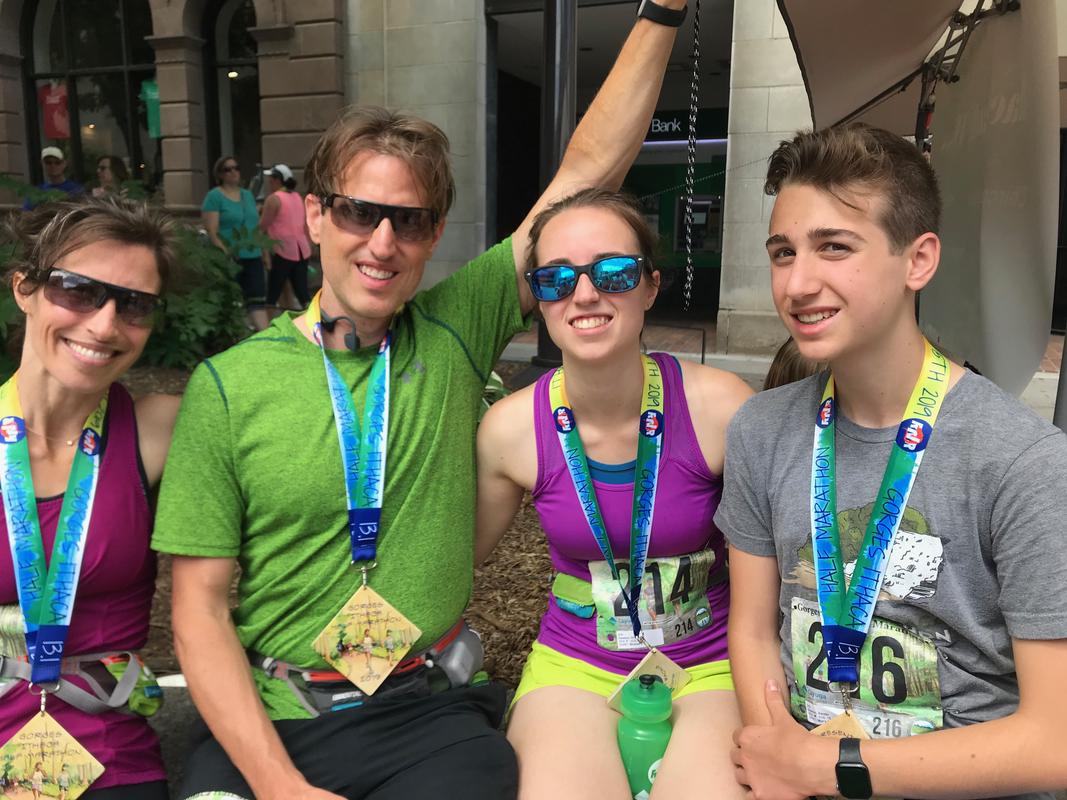 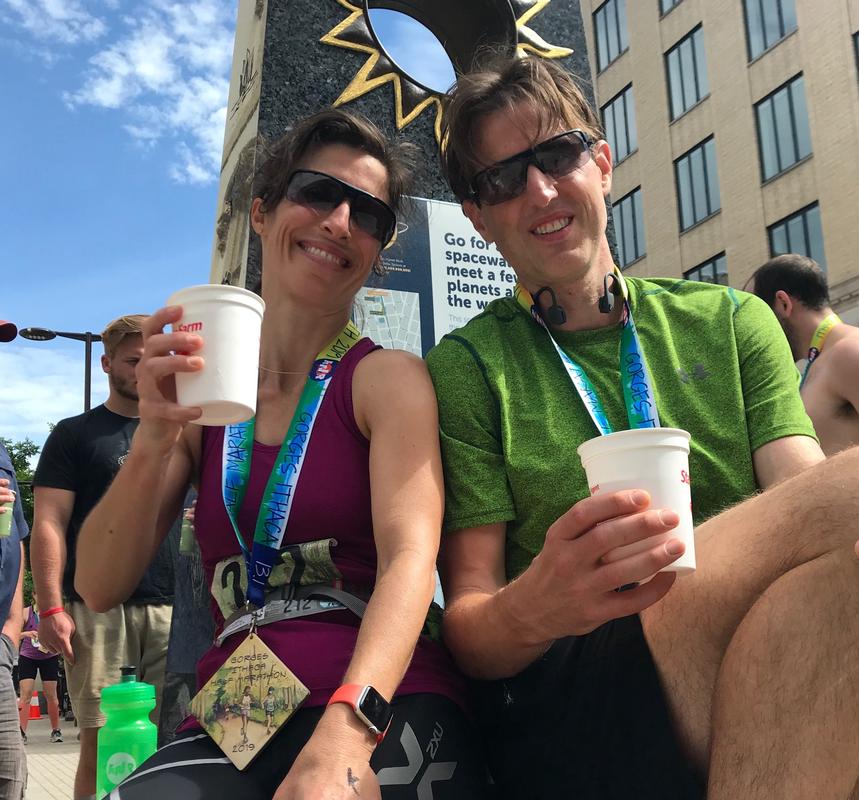 We didn’t have to wait too long for awards, and for me to get a gift card for my efforts: first in my age group! After that, it was a short walk to our stashed Subaru. We headed home to enjoy the rest of our sunny weekend.

Did you enjoy reading about the race? Head on over to Amy's blog post for more about her experience running this year's race!