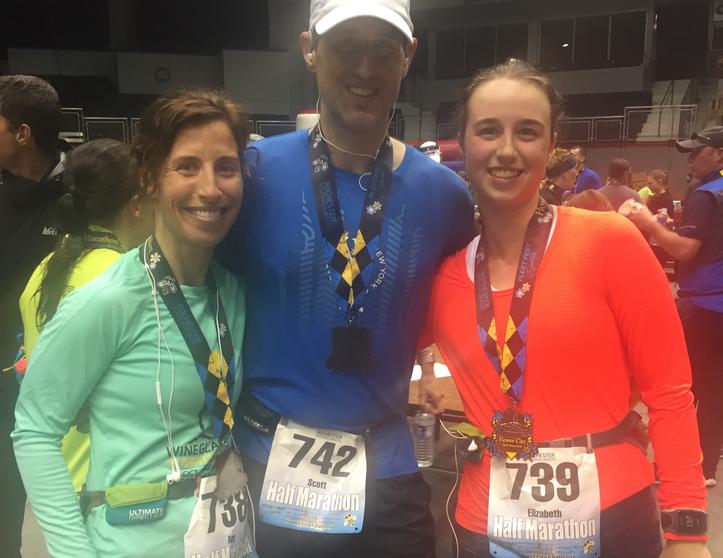 I’ve been training for Cayuga Trails 50, so this half marathon fell at a really bad time to be in shape to race it. Including this half marathon, my weekly running mileage would top 77 miles, my biggest ever weekly mileage total. Like in my life. Just the day prior I did 30 miles in Taughannock Falls State Park, making six circuits of the rim and base trails. However, my long lead-up to this week in training meant that my body was handling these weekly beatings quite well. I was feeling great!

Amy was going to race this half marathon (read more about her experience), and Elizabeth and Xander were also going to run. Xander needed to rest for an afternoon and evening rehearsal for a show he’s in, and he’s quasi-injured from a running perspective. I asked Elizabeth what her pace goals were for the race, and they were aligned with mine: 10 minute miles. I had a running partner!

As we were driving to Rochester, the spectre of rain came up in conversation. I knew with a huge crowd that we’d all want to have our phones on us to reunite post-race. Luckily we were able to find enough Ziploc bags in the car for the three of us, despite the slim 20% chance of rain. Clouds loomed on the horizon, though, so I feared that percentage was a bit low. We found street parking just a few blocks from the start line and exited into the 40-degree air. Man, it was cold. I had opted for longer running shorts and a long-sleeve tech tee I’d gotten from the New York City marathon. I completed my ensemble with my white Ithaca Triathlon Club hat and neon yellow gloves.

I said goodbye to the ladies as they headed to the start line. I was going to do a 1.9 mile warmup. I’m kind of a mileage geek, and my plan called for 15 miles for the day. I made a large circle back to the Blue Cross Arena where everyone was staged from. I made a quick pit stop in the bathroom and noticed that Xander was awake at home (he had tweeted one of his daily drawings). I called him to say good morning! Just as we finished the call, my phone rang again. It was Elizabeth, calling from deep within the throngs of runners behind the start line.

I told her I was on my way, and looked at my watch. It was just under 5 minutes until the start. I’d probably cut it too close to make it through thousands of people crammed in a mass, anticipating the start signal. You think? I weaved my way through people as the announcer counted down the minutes. I passed Amy, who was shocked to see me coming through just now. I wished her luck and kept making my way back to the 2 hour pacer, where Elizabeth said she was waiting. I got there and lifted up on my tiptoes trying to see if I could find Elizabeth. No joy. This would have to do, as they were about to start. I had some headphones in my ear in case Elizabeth wasn’t feeling chatty. A few seconds after we started, I got a call as I settled in running behind the pacers.

“Yes?”, I said, running lightly amid the other 2-hour hopefuls.

I realize in hindsight it was kind of a shabby thing to say to someone you were pacing. Still, it was also a bit of father/daughter ribbing that was probably okay mid-race. I slowed down a bit and she was beside me in no time. We chatted casually and made our way past smaller groups. We settled into a nice 9-minute mile pace. I checked in with her a few times as the miles clicked away, and she asked me to slow down a few times for her. I needed her pacing me just as much as she needed me! Our first miles were 9:10, 8:44, 8:47 and 8:56. Pretty consistent! Just after mile 3, I had a great laugh with another runner who hadn’t reset her phone from a prior run. Her phone announced loudly, “Three-point-one miles. Congratulations on your run!” A few of us chuckled at the prospect of thinking we were done. We were just getting started!

A Few Sprinkles Never Hurt Anyone

Around the 4 mile mark, light rain sprinkles filled the air. We both took some time to secure our phones fully in their zippered pouches as we ran. By the time we made the turn onto Park Avenue, it was solidly raining. I was suddenly grateful I had anticipated chafing and applied some of this little round band-aids to my chest. I’ve been caught a few times without them, and when it rains and my shirt soaks, it gets bad … quickly. I carried a small water bottle filled with Tailwind, and jogged slowly past aid stations as Elizabeth got water. Before we knew it we were ascending Goodman on the way to Highland Park. One spectator shouted, “The hill’s almost over!” I yelled back at her, “What hill?” I was feeling really good, and my legs were turning over nicely after being abused all week.

Once we’d gotten up the hill into the cemetery, we picked up the pace a bit as we rolled up and down, back and forth along the meandering path. The sun was partially out, and sprinkles were now intermittent. As we approached the exit to the cemetery, I asked Elizabeth if she’d like to play a game. It’s a wonderful running game invented by the late Alexander Pickemov, a Russian runner. I delighted in making up this back story, and reveal that Alexander loved to “pick ‘em off” near the end of races, referring to the runners in front of us. I don’t think Elizabeth was having any of it, but I like to think that it made her laugh. She was working pretty hard, but we were almost done. 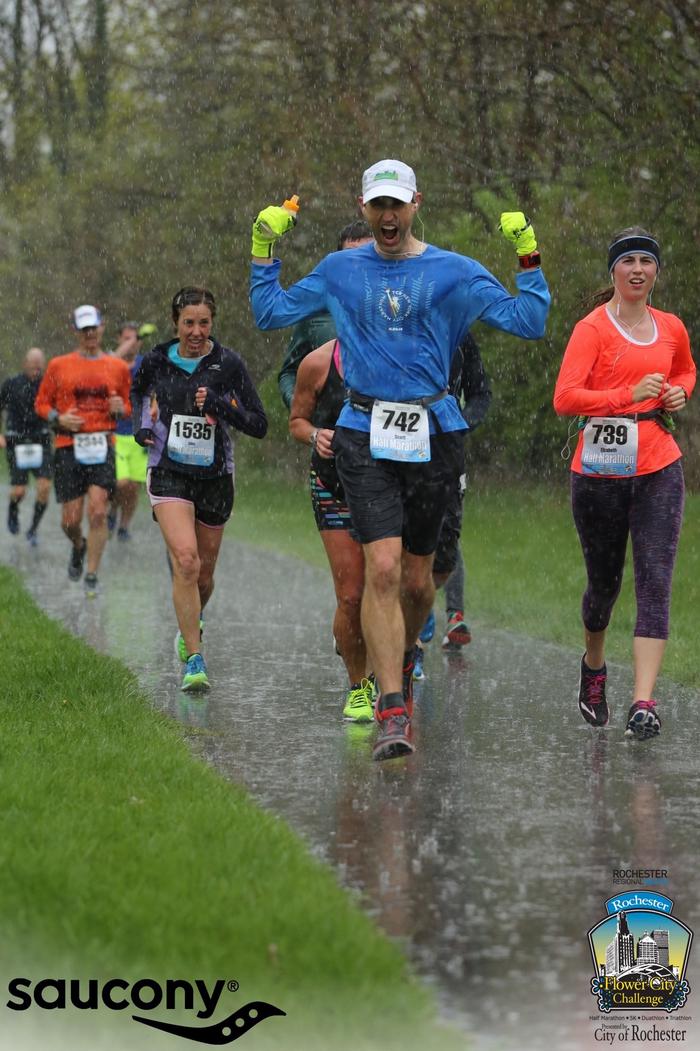 Before the torrent, plenty wet already

As we neared the the bridge across the Genesee River just after mile 12, a more persistent rain had resumed. Halfway across the bridge we were treated to a thunderous clap. I said out loud to anyone who’d be listening, “Oh boy, here we go!” The skies opened, unleashing a torrent that quickly filled the street and fully soaked my clothing. We were just a mile from the end, but as we continued splashing through standing water on Exchange Boulevard I had one thought running through my head.

I turned to my sixteen year-old daughter and told her my feelings. “This fucking sucks!” Then I added for good measure, “And yes, that’s the proper use of that word!” She wryly smiled at her quirky and seldom profane Dad, but we were both miserable. Our hands were freezing, our socks and shoes sodden, and the finish line was approaching far too slowly despite our closing pace of 9:43. I urged her on, and soon we were there. Beyond the lines of hardy spectators, I saw that the finish area was pooled deeply with water. It sadly would affect the timing equipment, making hard work for the timers, but their loss was my photo opportunity. I splashed in that finish line puddle like I was a kid on the playground. I felt that way, too!

We quickly made our way inside to thaw our extremities and have some of that delicious post-race pizza we all love. It felt good to take off my wet gloves, and soon I was feeling comfortable despite my dripping clothing. We were reunited with Amy after a quick phone call, and we spent a few minutes drying off a bit and talking with Donna Meyer, Elizabeth’s childhood pediatrician. We always see her at ski races and running races!

It was time to get warm. We left the arena to get to the car and the rain persisted. We ran as quickly as we could, yet just yards from the car another deluge swept in. It was like a movie set that called for a totally rain-soaked scene. I fumbled with my belt to get the car key. My fingers were freezing. As we shut ourselves in our car, we each took care of ourselves as the water beat down on the roof. I kicked off my shoes and peeled my socks off. I peeled off my soaked shirt and started shivering. Elizabeth had the foresight to pack a towel in the car. After she dried off and put herself into a warmer top, I gratefully draped her towel over my shoulders. I looked like I’d just dried off at the pool!

We all have wonderful stories to tell about this race, but those are mine. I learned a few things. First, it’s wonderful to be in a race and spend time caring about another person, and have enough gas in the tank to look around and enjoy the surroundings. Second, pack some dry clothes, even if the forecast is for 20%.