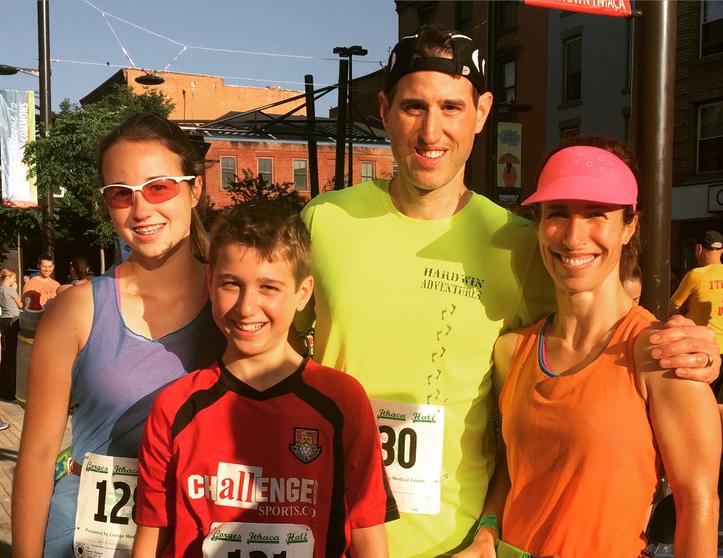 This was the second running of the Gorges Ithaca Half Marathon, and it turns out we'd ALL run this one, as Xander was "all in" after having run his first half marathon in Boston a few weeks prior. Amy wrote about her race and the kids over at skirtrunner.com, too. I committed to run a bunch of half marathons this year, and this would be my fifth and last (planned) half of the year. I would have liked to run Catharine Valley later in the summer, but alas, vacation awaits! As was the case last year, Ian Golden of Red Newt Racing did a great job setting up this race. From start to finish, from packet pickup to the post-race party, it was all good, all fun, and all Ithaca.

I was coming into this race after having raced a LOT since April: four half marathons, a triathlon, the May Day 5M and the Ithaca Festival Mile. Starting around mid-April, I had shifted from primarily running to full-blown triathlon training, reducing my weekly running mileage from 25 miles a week to about 15. I was swimming and biking a lot more, of course, so my overall training time per week was just about doubled!

Despite the 7:30a race start, Amy and were able to wake on our normal 5a schedule, have coffee and breakfast, and have a rather chill morning. We woke the kids a bit later and all enjoyed our pre-race routines, finding comfortable parking near the Ithaca Commons, and milling around the start talking with friends beforehand. It was really nice having the start ON the Ithaca Commons. There were plenty of places to hang out, and it was not a problem lining up near the front, given my aspirations to run a strong race from the start.

The Race: Gorges Ithaca Half Marathon

I saw Brian Lee near the start, and felt obliged to sidle up and tell him about the last time I swam, when he was in the lane next to me. He's a really great athlete, and I was intimidated when he started swimming next to me, managing 25 yards in the pool before I could get 2/3 of the way there. I told him so, and he was gracious ... but it's true. It's amazing that whatever level you're at, there's always something to aspire to!

The timers asked us to come closer to the start pad, and nobody was really moving much. I started to shuffle forward, saying under my breath that I didn't want to be that close, and I think Brian said, "Well, you are now!" As this great photo from theascendcollective.com shows, I was right up there, second from the right in bright yellow, five racers toeing the line.

We're off! The half marathon distance it interesting. It's short enough that you can pretty much go at a pretty good clip and know that you're not going to hit a wall, but it's long enough that you have to put up a good mental fight to keep that endurance for the entire 13.1 miles. As we ran through the first miles along the inlet, I spent a few minutes running next to Brian Lee, who would go on to take 3rd overall. No way could I keep his pace, and as we entered Cass Park, I dropped back. Heading South again on the other side of Route 89, it was inspiring to see the other runners heading into Cass. I think at this point I was in 5th place, and we were spread pretty thin. The Cayuga Waterfront Trail was a really nice stretch, with water views and boaters. Heading into the Farmer's Market area, though, I sensed a pack behind me, and while it spurred me on, I knew I'd have to govern my speed a bit to make the entire race work. Scotie Jacobs was in the pack, and urged me to keep up the pace. I really appreciated the friendly encouragement, and probably took this entire stretch a bit faster than I'd like. But hey, it's a race.

Heading up Renwick into Cayuga Heights was a mental beast. I put one foot in front of the other and made it up, but not before getting passed by a few more runners who were handling the climb better than I was. Strava tells me I did this split in 8:38, my slowest of the race but pretty fast in hindsight. It's funny: in the moment it feels sluggish and uninspiring, but those tough parts of the overall effort contribute more than their fair share to your sense of accomplishment. We skirted Cornell's West side, running past where I used to love waiting in late-night lines for Hot Truck. I bypassed the hasher table of beer as I turned onto Dewitt Place, and relished the twisting downhill that was Cascadilla Park Road. As I negotiated the tight turns, I couldn't help but think I could be on some narrow cobbled street in a small European hillside town. Beautiful. 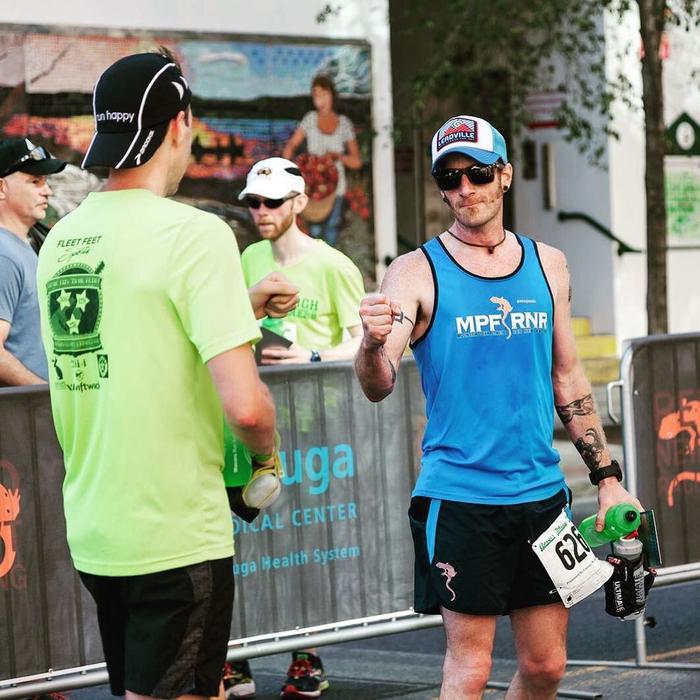 Me and Scotie Jacobs, photo by Allison Usavage

The last pitch of Cascadilla spit me out onto Linn Street, and I was especially grateful for the course crew here that ensured traffic was stopped. I sure wasn't planning to, given the gravity-assisted speed I had in this stretch (mid 5- to low 6-minute miles). Just a bit more than a mile left, and probably the most uninspiring mileage of the course. That is, until the finish line is in view, and you can almost taste the Ithaca Beer on your tongue as you approach the crowds. It was over. I gave Scotie Jacobs a fist bump, chatted up Brian Lee, and walked off what had been a very good race. I took a side trip to the car to put my finisher plate back and grab a bag to hold my water bottle, keys and phone, and returned to the finish to enjoy post-race and watch for Amy and the kids. 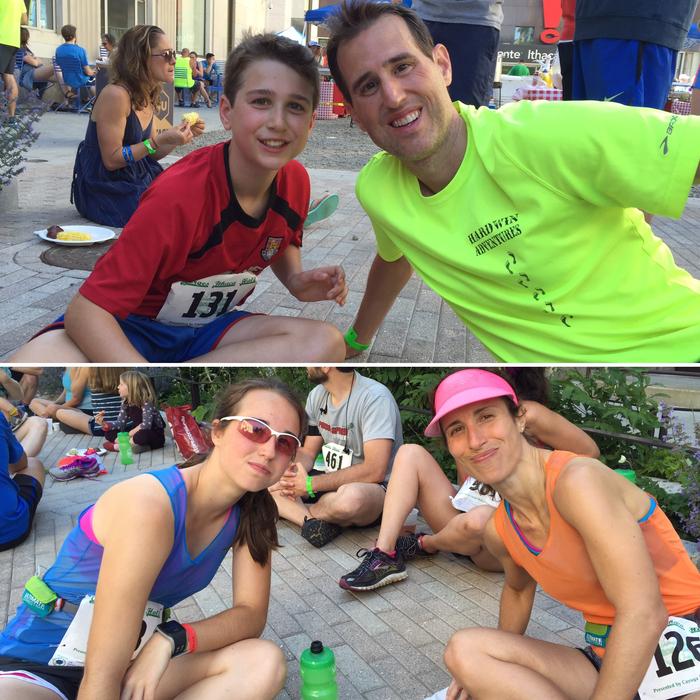 Amy finished with friends Christina and Jenny, and the kids were soon after. As with last year, the post-race accommodations did not disappoint. We got in a short line for some Ithaca Beer, and some delicious (early) lunch from Yellow Truck Catering. It was all on the Ithaca Commons, so we were quite comfortable with places to walk around and sit, and enjoy seeing other runners. Thought it was tough (as half marathons are), Xander was really pleased to have finished his second half marathon (he was the youngest runner!) and Elizabeth did a good job pacing him. I am sure it will be my turn next year, and the Dawson men will rock a half marathon together for sure.

At the age of 12, Xander was the youngest racer this year, which was really cool! As the kids finished, Ian Golden (on the tailgate of the white van, announcing) made a big deal of this. Ian also announced "The Dawson family is all in!" Racing together as a family is SO much fun, and we'll be doing plenty more of it! 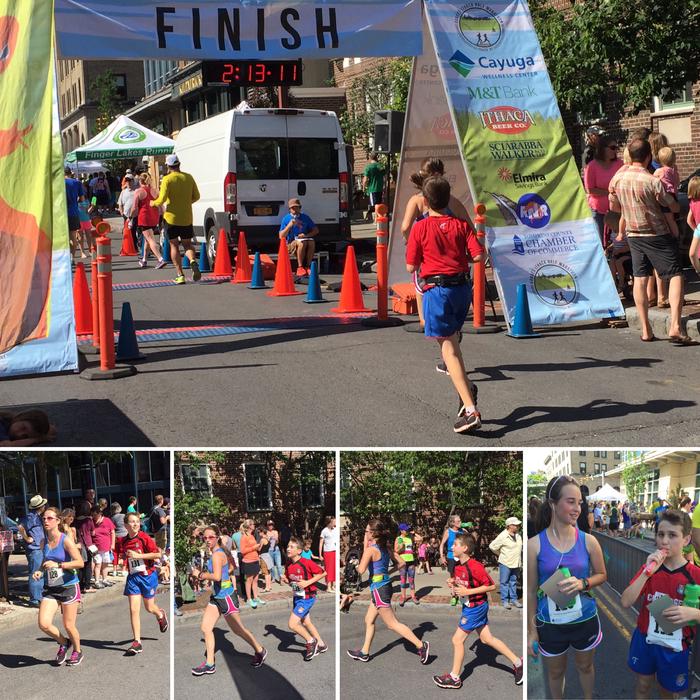 Here's my Strava route as captured by my TomTom watch.

Though the course was different in this second running of the Gorges Ithaca Half Marathon, I did beat last year's time by about 5 minutes! I won first in my age group (40-44) with a 1:32:43, while Scotie Jacobs, also in my age group, took the Masters win in 1:29:17 (I saw him last by the Farmer's Market). Brian Lee, also a super athlete in our age group, took 3rd overall in 1:23:57 (I saw him last at mile 2, when I was vamping for the camera and he was working hard).

I'd be remiss if I didn't fast-forward a few hours. The kids had a piano recital in the afternoon, after which we headed home for some delicious homemade Mexican (our favorite), grilled sweet corn and some refreshing mango margaritas. I'll just put this picture here and make you hungry. See? Racing = Fun. 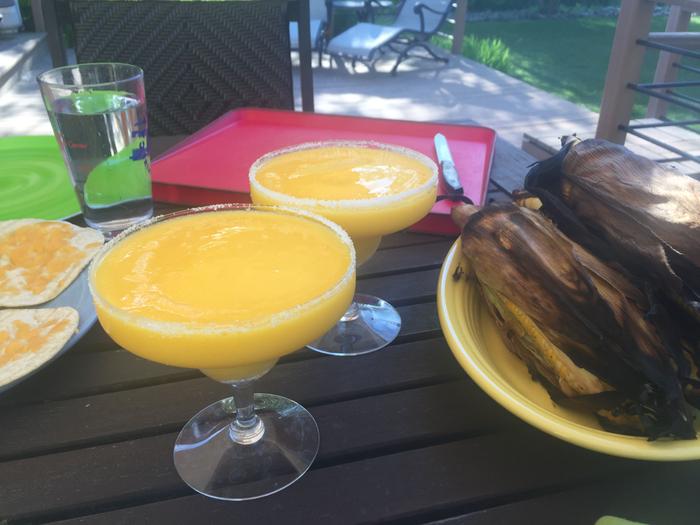