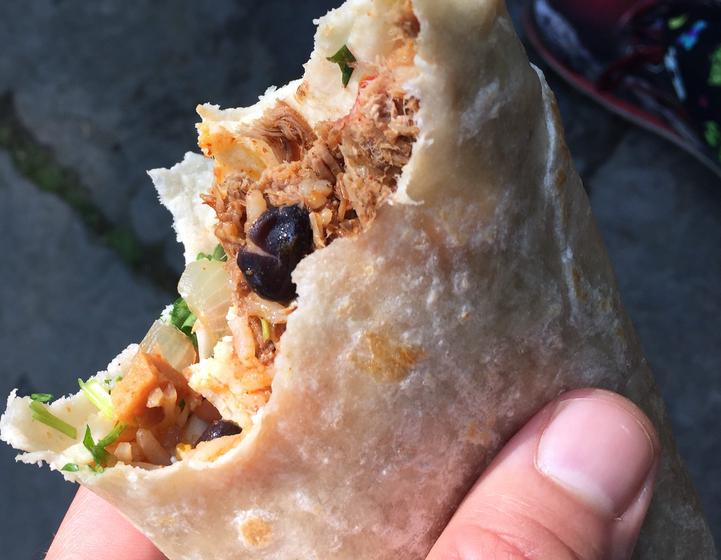 As I write this, I'm about to jump into Green Lakes Endurance Run's 50K tomorrow morning. After the Cayuga Lake Triathlon, I shifted gears into the final weeks of a 50K plan to have some semblance of preparation for this race. As such, it was serendipity that the fourth running of Lucifer's Crossing coincided with a 5-mile day on the 50K plan. I'm not one to mince miles when a super fun 6.66 mile trail race is in the cards. I decided to register race morning (August 20) and enjoy my trail time with a few friends.

I arrived at Treman Park about a half hour before the posted 10a start time. It'd be enough time to plunk down $25, fold and pin my bib on my shorts and do a warm up run to a remote park bathroom. I mingled with Pete Kresock, Ron Heerkins, Rich Heffron and Jed Sheckler before we got underway. I lined up at the very start of the pack again, relishing the opportunity to burst off the line. I stuck my tongue out and grinned wryly as I felt purchase on the gravel beneath my feet. We all swiftly rounded the first corner toward the causeway that promised to get those feet wet. Splashing across was a mixture of sheer joy (who doesn't like running through a massive puddle?) and delicate care to remain upright. After a half mile, I started up the Jeep road that led to the rim trail.

As I began ascending, I thought of the irony that just months before, I had run this same stretch twice, yet far slower. One of the reasons I love this race is the ability to tromp on the gas pedal, forgetting the brake. It's the 5K of trail racing. I knew that by the time I was done, I'd be done and wouldn't need to preserve myself for anything. These thoughts occupied my mind as I ran over the flowing sections of trail leading to the stone steps flanking Lucifer Falls. 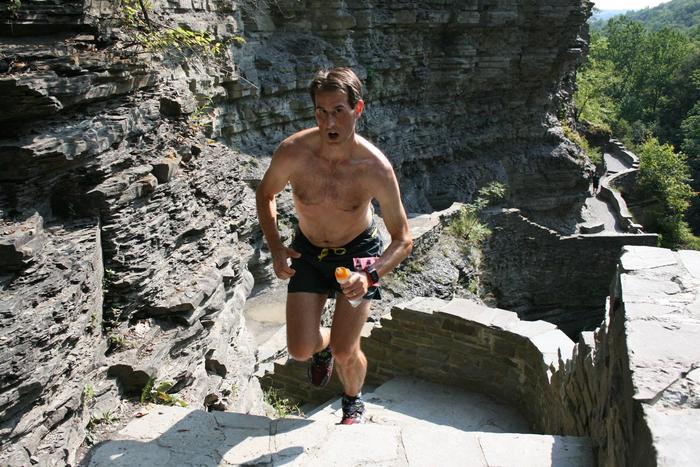 With a few short exceptions, I ran the steps. It felt good to use my arms to get my legs up and over each step, and it was over soon enough. I enjoyed rounding the Old Mill, passing a few tourists along the way, and heading onto a quieter part of the course. The stream crossing at the top was less eventful than the causeway. I was able to bound over the 3-4 inch trickle by just getting my right foot wet. The second half of the course beckoned. The Finger Lakes Trail (FLT) section flows at the beginning with some decent climbs and descents, and then bombs the remaining elevation away along some sweet stretches of singletrack to close out the loop.

Just a mile from the end, I heard a runner (Shaun Griffith) come up suddenly behind me. I glanced backward. He was close! It was as if he was a ghost, since I'd felt alone until then after passing one runner earlier on the FLT stretch. I felt a surge of adrenaline as I became determined to not be passed. There was one short hill left on the course, and I used it to my advantage. I shot up it, not paying my screaming quads any heed. When we reunited at the end, he told me that made the difference between him catching me or not. He finished 9 seconds after I did.

I'm afraid I indulged in some finish line drama, too. Natalie Thompson had passed me near the beginning of the run. I didn't think I'd see her again. As I ran the final stretch of road toward the field to the finish line, I spotted her in the distance. Could I catch her? That adrenaline was still lingering in my body and I felt like I had more to give. My legs started answering the call to sprint, and sprint I did! I only saw her in my field of vision. I did not see Ron Heerkins Jr filming her from the right, and only thought he was another runner. Turns out he was filming her for a project, and I provided entertainment in the form of a massive photobomb (videobomb?) at the finish line. Natalie answered the call as I passed her, and put in some extra effort to edge me by a second at the finish. I'm grateful for that, since I was feeling rather shabby for trying to edge her right at the finish anyway.

There are no awards at this super-chill trail race, but I did enjoy the burrito-feed from Gorgers Taco Shack and hard cider from Grisamore Cider Works. So much that I felt compelled to photograph my food. I rarely do that, so you know it was good.

By the Numbers, Strava Track

This was the fastest I've run this race! I shaved about 20 seconds per mile off my prior times, and felt none the worse for wear. There were a lot of people there, too: it's definitely a race gaining in popularity. See you there next year?