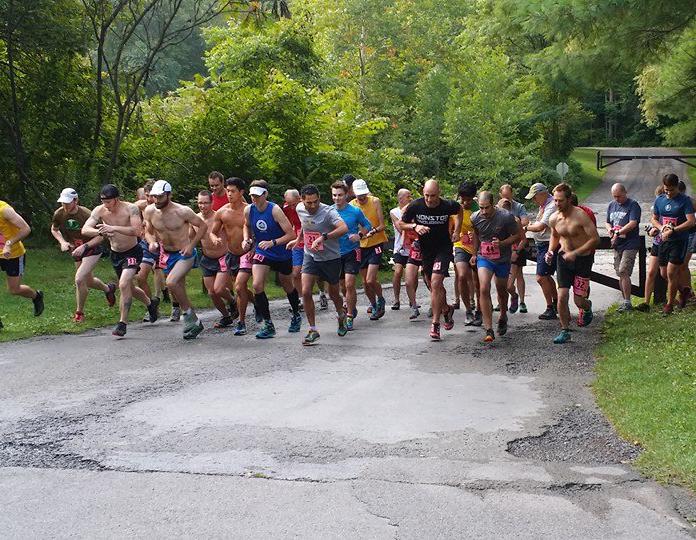 I made a last-minute decision yesterday (August 23, 2014) to run in the inaugural Lucifer's Crossing trail run at Robert H. Treman State Park in Ithaca, NY. This is one honest trail race, including steep ascents, slippery descents, leaping over small brooks, wading through foot-deep rushing water, quad-busting stairs and blissful singletrack. I'm contemplating running a 50-miler next summer, and this is part of that course. Preview time! Ian Golden's Red Newt Racing organized this event, and once more I laced up my trail shoes, put on my Dirty Girl gaiters and slipped into my FLRTC singlet from some amazing trail running.

We've had a lot of rain locally lately, so I should not have been surprised to come across a "Road Flooded" sign on the way to the race (road cleared, thankfully), followed by a one-way stretch due to half the road being, well, gone. It was a good guess at this point that the trail would be wet! About thirty of us toed the line at the start, which was on the opposite side of the base area's stream as advertised. The park had shut the gate to this stream, creating a potential choke point for runners that the race organizer wanted to avoid. On a positive note, that meant I could keep my feet dry until later! 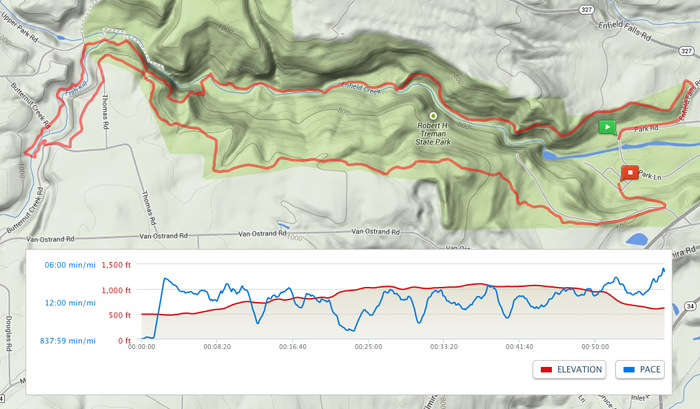 A steady incline almost the whole way, and then a nice downhill finish! Creek crossing at far left of map.

The race is short in distance, just 6.3 miles, but it more than makes up for that with the challenges it threw my way. The first stretch is a Jeep road that quickly gains elevation and then meets up with the hiker trail. We crossed a footbridge and bam - there were the fabled Lucifer's steps. I took most of them two-at-a-time, using my hands on my quads to help keep my upward momentum. They weren't that bad, but then again I only had to do them once. We hit the Old Mill at the top, near where I was able to fill my handheld and have a gel. I traded places with a few runners during the next mile, as we first ran through the creek crossing (easier than I thought: just run right through it!) and then up and down some short ravines. Soon after, I was enjoying some level running and was able to really hit a good stride. The trail began pitching more downward, and I had some nice gravity assists on the way back to the finish line. 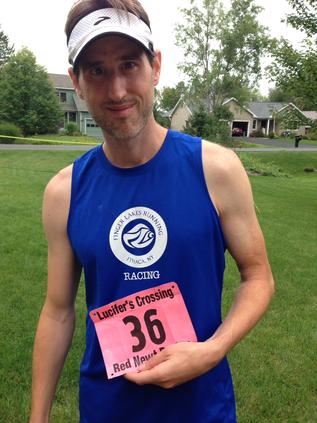 This was advertised as a low-key event, and I liked it that way. In the words of Red Newt Racing: No race shirts. No prizes for winners. This is about sharing a run on beautiful trails, and a wonderful trail running community. Nice. The finish atmosphere was jovial. Runners with mud-caked legs and big smiles milled about, high-fiving, talking about the race, and cheering in runners. This is what I love about the trail running community. It's downright fun.