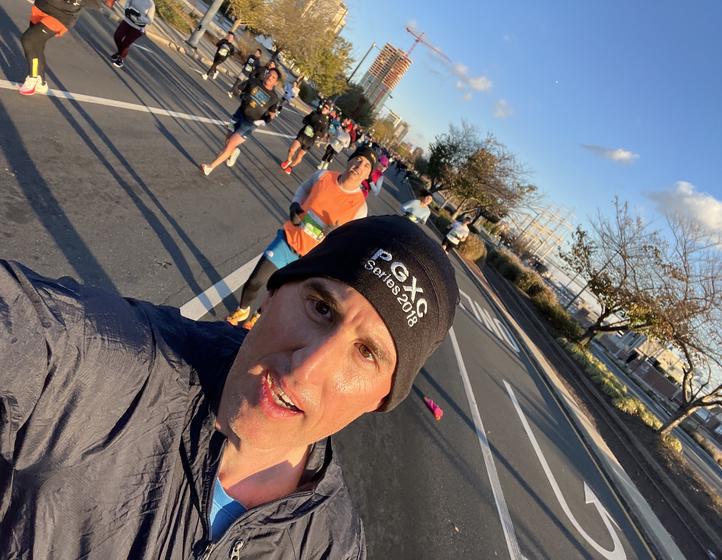 My daughter Elizabeth decided to sign up for the Philadelphia Marathon this year. It’d be her first marathon, and she was happy to have me and Amy come and support her. As we reserved the hotel and considered logistics, we decided we’d rather just run the race, too! We’re crazy like that. So, I registered and committed myself to my fifth marathon distance.

I was coming off of a heavy-volume FLRC Challenge, and more importantly, the FLRC Ultra Challenge, so I was pretty tired coming into marathon training. I’d spent the entire summer mostly on trail, so my first road run (a 3-miler) on August 23 had the caption “Hello, roads! It’s been a minute. Time to start training for Philly soon!”

I looked up the plans in Hansons Marathon Method and started an intermediate one that contained some speedwork. I shelved that plan after one week. I just wasn’t feeling it. And, the time I had was kind of compressed: due to the timing of the FLRC Challenge, I only had 13 weeks to prepare. So, I happily adopted Hansons’ “just finish” plan. I covered 440 miles during the training cycle, making it up to 16 mile long runs three times. Did I feel prepared? Not as much as prior marathons. But I felt ready.

We booked a room at the Sheraton Philadelphia Downtown. The valet was crazy busy when we got there, but I was grateful they parked our car. The hotel was totally overrun with runners and their families. The hotel had kindly put out Gatorade, granola bars, and fruit for us runners. We headed headed to the expo just about 90 minutes before they were to close for the day. It was kind of underwhelming with the lack of exhibitors; there were a lot of empty booths. We wandered through the exhibits that were there and headed back to our hotel with our bibs and shirts. 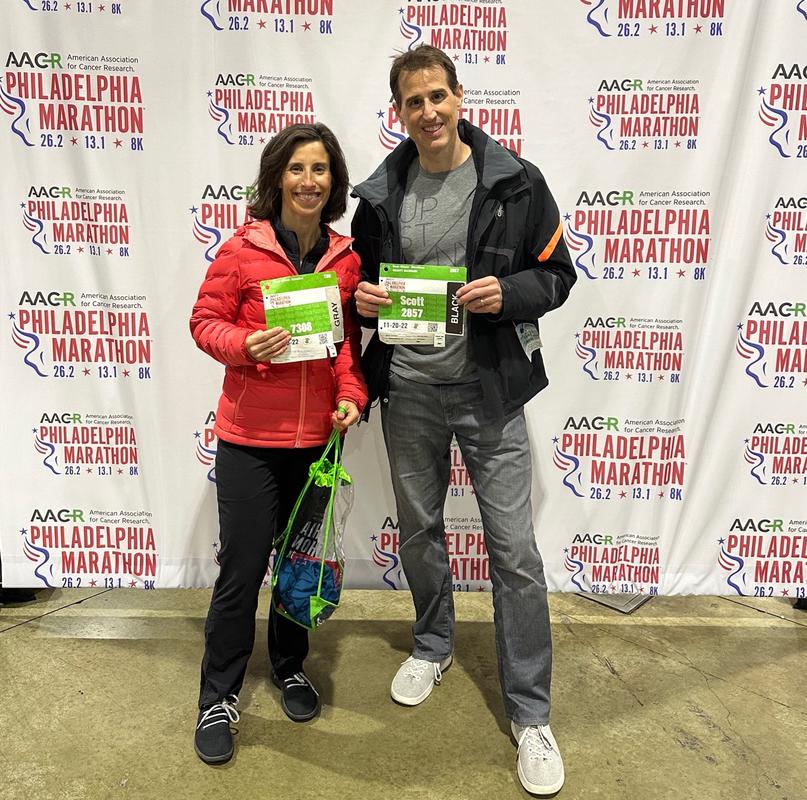 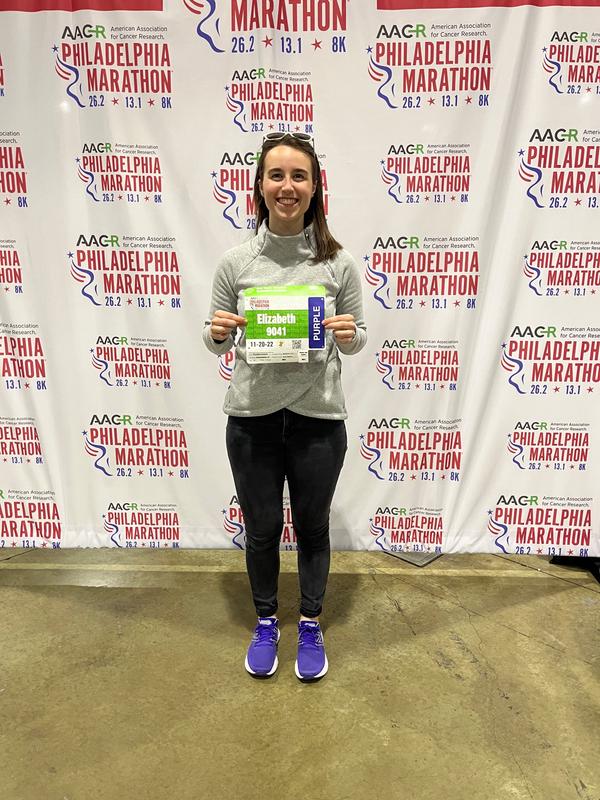 After a complimentary glass of wine in the hotel bar, we enjoyed a longer walk to dinner at LaScala’s Fire at the corner of 7th & Chestnut. On the way there, we walked through a beautiful outdoor market. It was very festive! 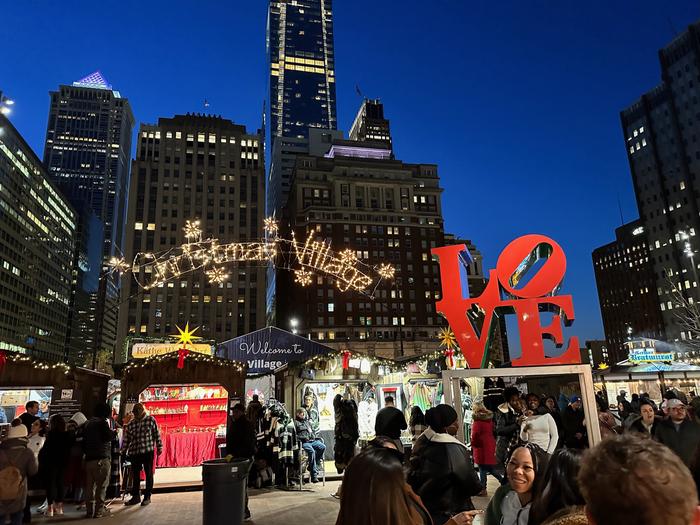 The outdoor market was so beautiful!

Dinner was great: we enjoyed time with our friends Art and Emilie. The portions were far too large for us, sadly. We overordered some brussels sprouts that we mostly left untouched. 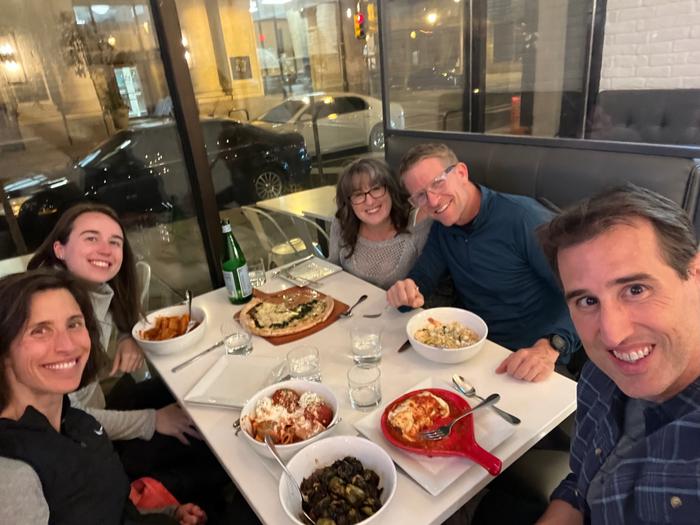 The Race Before the Race

Back at the hotel, we started getting our gear organized. Amy realized in horror that she’d packed two right shoes. Elizabeth got on the phone with Asics after a quick Google search and learned that they had a few option in stock that’d fit Amy. Problem was, they were a 20-minute walk away, and they closed in 15 minutes. What ensued was something out of an episode of The Amazing Race. I followed Elizabeth out of the hotel room, wearing just my socks, my shoes in hand. I ordered an Uber while the elevator descended, slipping my shoes on as the doors opened.

We raced out into the cold streets and rounded the corner to where the Uber’d meet us. Where was it? The app said it was running late, so I called. The driver apologized and said that a prior fare had forgotten an item. Time was running out! Elizabeth called Asics to appeal to them to stay open a few minutes past closing, but they were adamant that they’d close on time. The driver arrived and I checked my watch. Five minutes left. “Can you get us there in five minutes?” I asked. “Sure, I can try,” Amy said. I took it as a positive sign that she shared my wife’s name. She drove confidently to the destination while Elizabeth called the shop once more and implored them to stay open just a minute longer. “If you pull the shoes, we are literally going to walk in and put down our credit card,” she said. They relented and agreed.

We pulled up at the address and it turned out to be a shopping mall. What? How’d we know where Asics was? The mall was clearly about to close. Elizabeth said she’d take the first level and I could take the second. I bounded up the escalator and ran down the hallway, parallel with her below me. And there it was: Asics! I yelled down to her and entered the story. John and Mick were there, smiling, with three pairs of Asics in Amy’s size. As promised, we plunked down our credit card after we chose the pair we thought she’d like the best. And the best part? Those shoes were on sale, 60% off for a total of $52. Not bad, even when you factor in the Uber rides. Not bad at all. 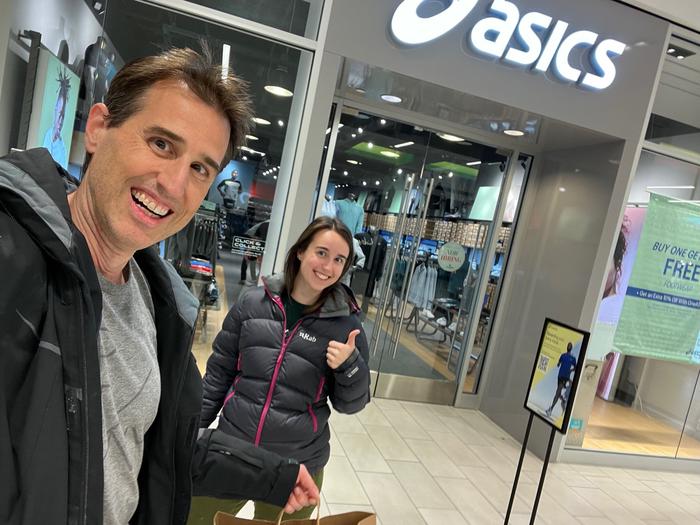 Elizabeth and me after our Asics rescue mission. 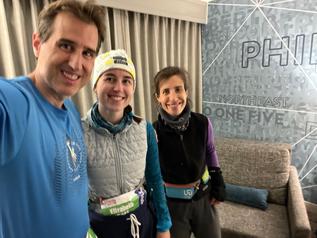 Pre-race in our hotel room.

Although tragedy was averted, I slept fitfully. We all woke during the 4 o'clock hour to eat plain bagels with peanut butter. I enjoyed some tea, too. Once we arrived at the start line, we made the mistake of following a volunteer’s instructions that security lines would be shorter around the corner. Turns out they were just as long. We had given ourselves a full hour to clear security and we made it into the venue just 10 minutes before the race started. Way too tight, and way too stressful.

I got in my assigned corral and then realized it was foolish to not try to pee beforehand. I got in a decently-sized line and listened to the national anthem and the first 2 waves go off before it was my turn. I literally got back into my corral and stripped off my goodwill clothing as the group was moving up toward the start line. I saw Art (from dinner) and Alex (another Ithaca friend who trained with Art) near the back of the black corral. I was happy to take a picture with them literally as they set our corral loose. I fiddled with my belt to get my phone stowed again, and I was probably the last in my corral to leisurely cross the start mat. 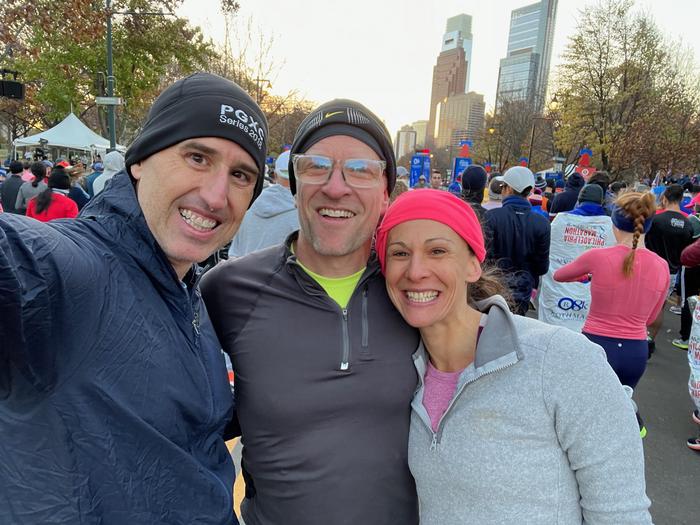 Art, Alex, and me at the start line.

The first miles were really fun and relaxing. I ran with Art and Alex for the first four miles and enjoyed our bits of conversation. I gradually peeled away from them, though, and settled into a groove of mid to high 7-minute miles. I snapped this picture running along South Columbus Boulevard with the sun rising to my left over the Delaware River.

I felt warm enough to peel my windbreaker off around mile 6, wrapping it around my waist as the energetic crowd along Walnut Street spurred me onward. The wind hit me like a ton of bricks as we crossed the exposed bridge across the Schuylkill River. The hills up into the Centennial Arboretum were tough to run up, but I was grateful we could run down them. This course featured several out-and-back segments like this, but I found them mentally tough. I was never really being sure of where the turnarounds would be. Footing on the roads in Fairmount Park was kind of tricky, too. The wind really picked up in the mid-morning hours, and little apocalyptic mini-tornadoes of leaves provided some entertainment as we danced through them. I had to tuck my fingers back into my RunMitts several times due to the windchill.

As we pulled onto Kelly Drive for the longest out and back, I saw elite runners about to finish. “Holy shit,” I said out loud. It was phenomenal that they’d been keeping up just shy of a 5-minute mile for 25 miles by that point. I had at least 10 miles to go. I was into my second bag of Honey Stinger chews by now. Holding them in my hands kept them soft and pliable, and coupled with getting water at every aid station, they were a solid choice for nutrition.

Since mile 17, I’d been slowing to 8 and 9-minute miles, though. It was all tired legs and tight hamstrings, really. Nutrition was not a problem. By mile 21, at the turnaround in Manayunk (a very cute and energetic town), I was utterly fried. I had to really bargain with myself. I allowed myself to walk through the water stops and up a few small hills. I was squarely in preservation mode. I felt like I was going so glacially slow, but in reality, I had only one closing mile (the 25th) where I ducked into a 10:03 mile. Soon enough the last mile was upon me. The crowds were so thick I felt like I had to run, and run well. I managed to will myself through a decent closing mile and crossed the finish line. It was my slowest marathon of the five, but a marathon finish is a marathon finish. And I was done. 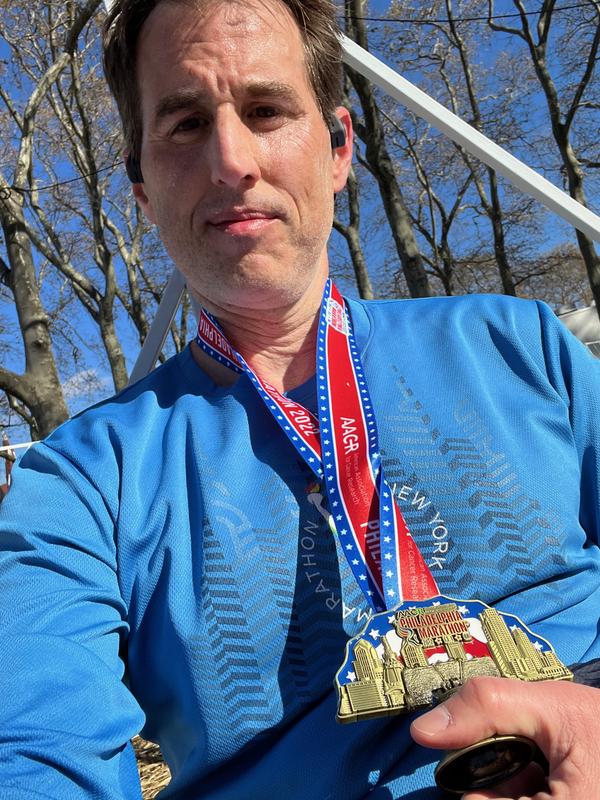 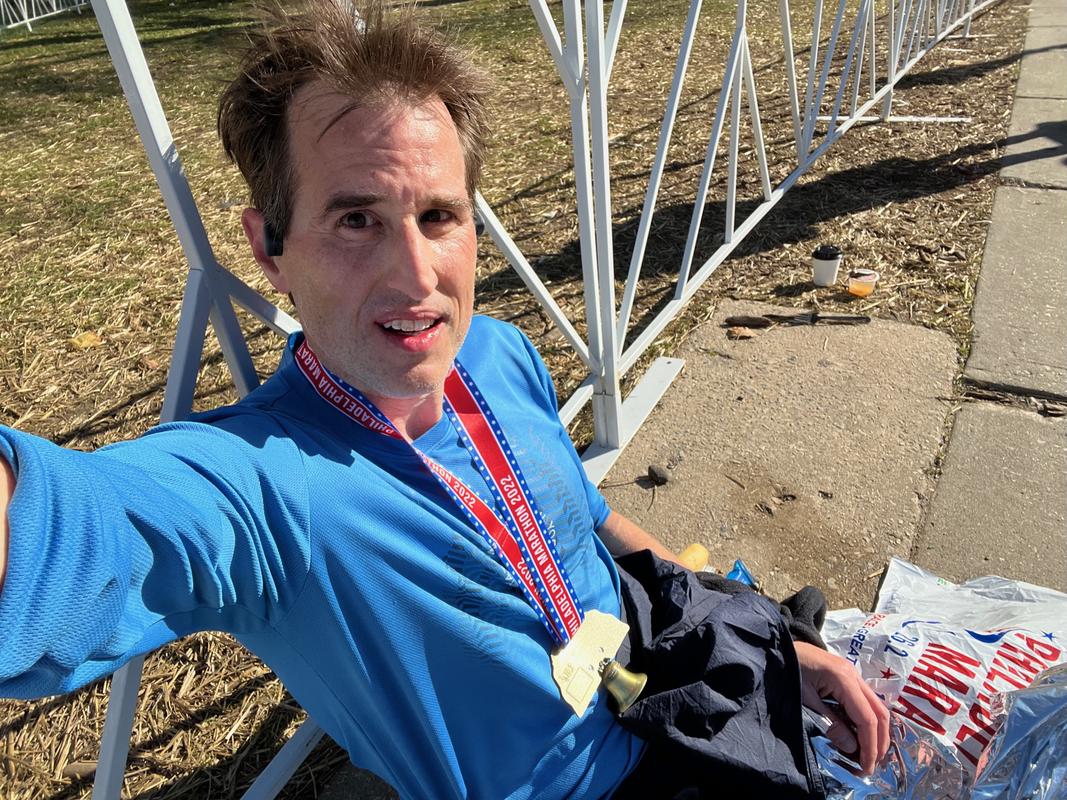 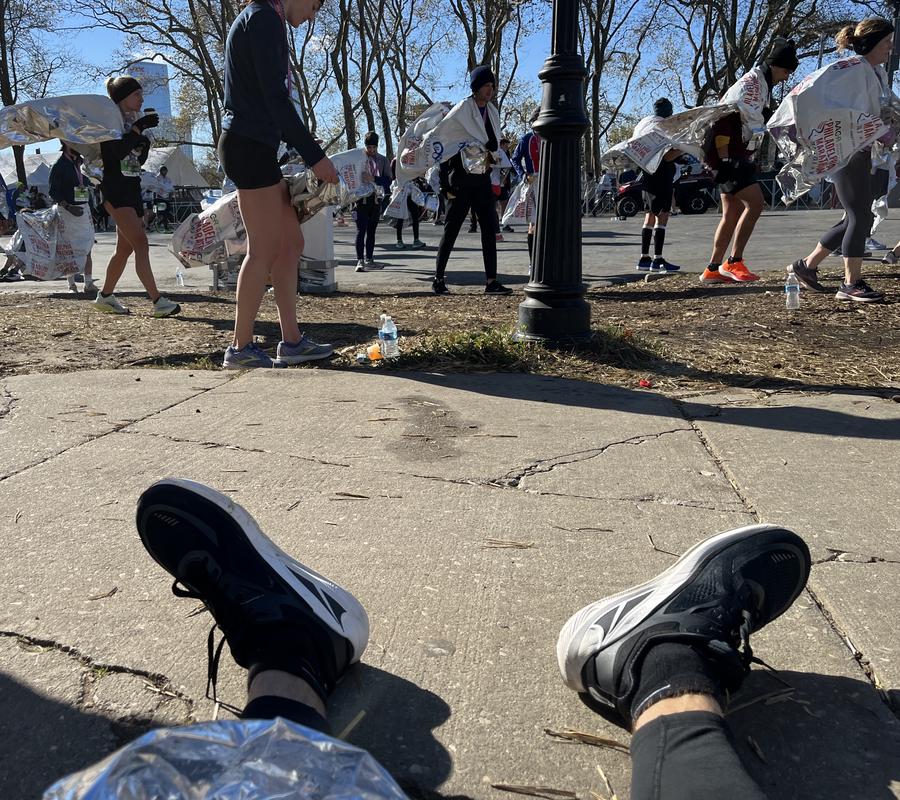 The post-race vibe was not that great. We were quickly ushered through the food tents. I was handed a NutriGrain bar, a banana, and a bottle of water. Between my space blanket and gloves, I had no reasonable way to carry any of these things, so I found a patch of concrete to sit on and took this picture of runners walking by. Zombie apocalypse? Perhaps.

They had us all funnel out through a narrow chute, and I barely registered that I was staring at the Rocky steps. I made a beeline for the hotel, which though it was less than a mile away might as well have been on Mars. It felt like it took so long to get there, and I was so chilled. I stripped off my clothes, hunkered down under the bed sheets, and waited to warm up slowly. A hot shower sealed the deal and I waited for Amy and Elizabeth to arrive. They both finished and we all met back at the hotel and each got through our warming-up routines. I was so grateful to be done and headed for home – happy for the experience, but also happy for the coming rest and preparing for whatever adventure we choose next.

Amy wrote a fantastic blog post about her experience, too. It’s filled with grit, determination, and is incredibly inspiring.