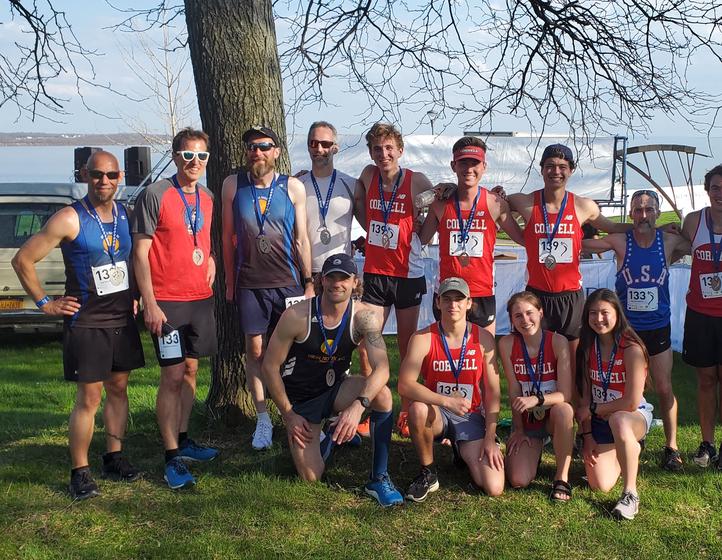 Back in mid-March, Brian Lazzaro reached out to me and asked if I’d be a part of, as he put it, a reasonably competitive Masters team for the Seneca 7. He went on to describe the race in his email, noting that the Ithaca community historically assembles strong teams and have won overall several times.

I think you know the race, but if you've never done it, it's a hilariously fun and frantic relay race around Seneca Lake. The course starts in Geneva, runs down the west side of the lake to Watkins Glen, then back up to Geneva for a 77.7 mile circuit. There are 7 runners on a team, each of whom run three legs that are ~3.5-6 mi each. We'll have a van to move the resting runners from checkpoint to checkpoint. The race is a staggered start, so the slowest teams go first and the fast teams run them down and then get out in front. It's an absolute blast.

Why not? I’d never done the race before, but it’d be a good experience and an opportunity to get to know some of the names and faces I’ve encountered at local races, FLRC events, and Mithacal Milers. Our lineup of 7 runners from High Noon Athletic Club was fantastic:

I raised my hand early to be runner 4. With my post-Covid status (read more about my Skunk Cabbage sufferfest) and doubts about my ability to run fast, I wanted to minimize the damage I’d potentially cause. The short legs, even though one was a challenging climb out of Watkins Glen, would put me at a total of 8.6 miles for the day. It sounds short, but when each of those efforts was at 5K pace or better, and under a relentless sun and 85 degrees bouncing off the pavement? This had the potential to be brutal. 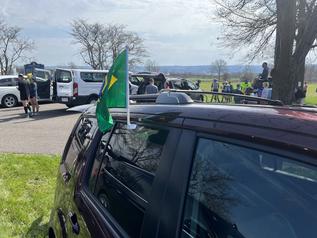 I was cold at the start. As we packed up my car (I’d offered our Pilot as a race vehicle) in the parking lot in Geneva, I was shivering badly enough for Dave to offer me his puffy. I gratefully took it. We joked that later in the day we’d be looking back on these temperatures with jealousy. We were right. It would have been nicer to have 50-degree temps with overcast skies, but you can’t choose your weather in upstate New York. As a fast team, we got a Brazilian flag to fly from our car. It promised to give us priority at transition points, I imagine for parking, but I’m not sure that really worked out in many cases. Still, it was a fun conversation starter.

2.2 miles at 9:59 am: This was just over 2 miles. Easy, right? That’s what I thought, and the first half mile was a nice downhill stretch. I ran the first mile in 6:01 and managed an average pace of 6:19 when it was done. I recharged with a Honey Stinger waffle and a half PB&J. On to the next stops! (Strava link) 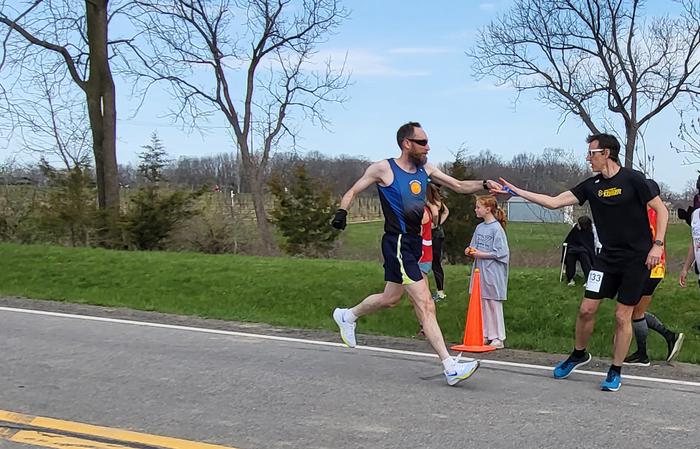 My first handoff from Dave 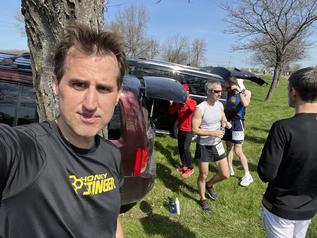 3.5 mi at 12:57 pm: Really dreaded this climb out of Watkins. Safety vests were required by the race for the descent into Watkins and the ascent out of it, but we’d confirmed with the race organizers that we were good to go with wearing high-visibility shirts. I donned my traffic safety-cone orange Finger Lakes 50s shirt. As I took the handoff from Dave, the volunteer stopped me and told me I had to have a vest. What? A quick exchange between Brian and the volunteer cleared that up. I lost a few seconds, but all in all not too much of a delay. I headed uphill almost immediately but leveled off after taking a left on 414. Passed a lot of people walking at this point. Cruelly, the course profile turned uphill at the end. My average pace for this leg was 7:32. Net elevation gain was approximately 400 feet, not unlike Taughannock Falls’ rim trail. I ran with Honey Stinger Stingerita Lime chews and refueled with Honey Stinger Rapid Hydration Mix, another half PB&J, and some blueberries. (Strava link)

2.9 mi at 4:17 pm: I really felt off before this final leg. I was excited about the prospect of being done, but a combination of things made me really nervous. First, we were playing leapfrog with a team from Cornell Running Club, and we were very much still in the running for third place. Second, I’d been struggling with what to eat, having had some of Scott’s Jelly Bellies and the rest of my Honey Stinger chews. I felt like I needed a proper meal but that wasn’t going to happen. Then as icing on the cake, my heart started racing. Perhaps it was the heat of the day, which was 85 degrees by this point, or my body trying to chew through some of the sugar I’d been throwing at it. I hoped it wasn’t heat exhaustion. I rested in a child’s pose on the ground in a fruitless bid to calm down and get back to a reasonable heart rate. No joy. I fought off the well of panic rising in me as my team told me our runner was here. I stood, grabbed the slap bracelet from Dave, and just started running. I felt better almost immediately. At this point in the race we were mostly alone as a team, jockeying for position with Cornell. This leg ran along the lakeshore the entire way. Really nice and flat. I enjoyed a cool breeze for the first half mile and then that died down to literally nothing. I looked off to the left at the lake’s glassy surface and smiled at the thought of stopping running, dashing down to a private dock, and jumping in. I focused on keeping an even pace, my heart rate now chugging right along in my threshold zone. I passed Cornell’s runner about a mile in. I looked at my watch a little more often than I usually do, literally counting down the tenths of a mile until could hand off the bracelet to Brian. I spotted some of my team on the road’s right shoulder as I approached the transition point, and I was overwhelmed with their encouragement. With a quick transfer of the band, I was done. My third and last leg ended with an average pace of 7:05. (Strava link)

I saw my friend Brenda Michaud running toward the Ol' Fourteener transition and slowed down enough to yell hello from the car. I caught up with her as she finished her running leg and rejoined her bike team. It was nice to see her since she moved away a few years ago. I miss taking Bikram yoga with her and Amy.

I passed a runner from Aruba as I was climbing out of Watkins. The day before, Amy met their entire team while she was running at Taughannock. They were so friendly: she enjoyed talking with them, shared that I was doing the race, too, and got their picture. I was so out of breath during the run I couldn’t say anything to their runner, but at Scale House Brewery I caught up with one of their runners waiting on the bank by the road. The man (third from the left in the photo) smiled and remembered meeting Amy. We had a nice short chat and wished each other continued luck.

The middle seat in the second row became the most popular seat in the car due to the stellar air conditioning in that spot. We thought on-deck or recovering runners might appreciate the front passenger spot for the leg room, but climate control won the day. I even took that spot after my third leg, opting to have Josh drive an additional leg to let me cool down. Incidentally, that was a big benefit of having my car be the crew car: I always had the driver’s seat to come back to after each leg! 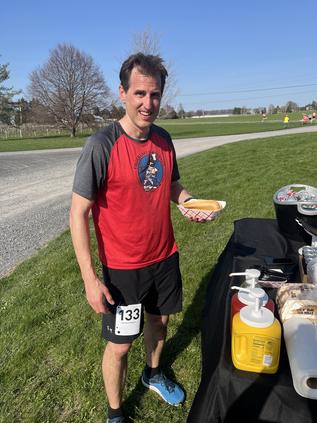 Post-race hot dog? Why not!

At Zugibe Vineyards, the second-to-last transition area, Roger purchased a hot dog while we were waiting. It looked so good, and my stomach was still in search of sustenance, I couldn’t pass it up. I was done running, after all. I happily ate it as we drove on to the last transition.

Bottomless Brewing was the last transition zone, and by that point, Cornell’s team had edged us again. Their last runner had quite a headstart on us by the time we transitioned. Scott Weeks was up, our super-fast ringer who’s also Groton’s varsity track and cross-country coach. Could he reel in Cornell’s runner? Scott was looking fantastic when he left, but we weren’t so sure. As we drove the divided highway leading to the left turn in Geneva, we yelled encouragement to Scott. He was bombing down the hill and looking so strong. Still, Cornell was a ways ahead with two miles left. We assembled in the “Team Reunification” spot and waited.

Just before I started capturing video, I spotted Scott’s blue USA singlet in the distance. No Cornell red. “Oh my God, he did it!” I yelled.

He flew by us to the final turnaround and we all sprinted in to the finish with him. He must have been doing sub-5 at that point, and later told me that he’d passed Cornell with a mile and a half to go. Phenomenal. We ended up edging Cornell by 55 seconds: a solid showing for a 100% Masters team from Ithaca, NY. We enjoyed talking with the Cornell team after we'd both finished and snapped this post's feature photo. Look at all those fast Ithacans! 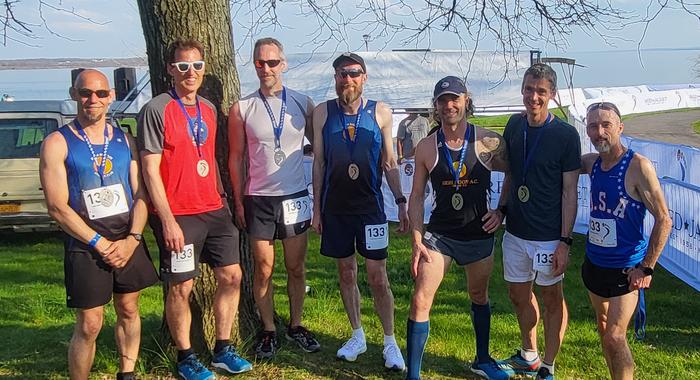 Post-race photo of our team 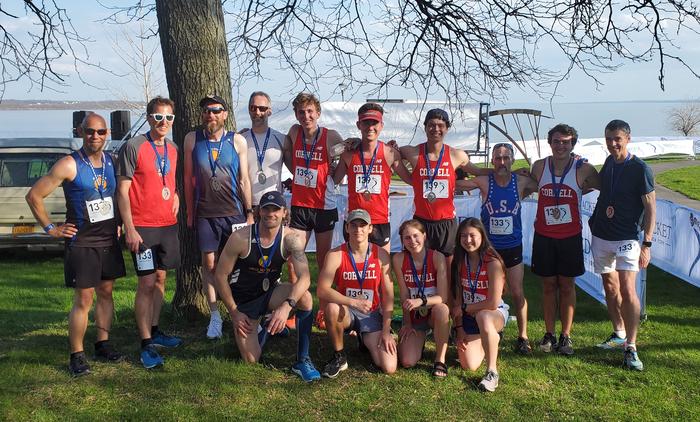 Post-race photo of our team with Cornell

The race helpfully provides a roadkill report, where roadkills denote you passing someone, and roadkill denotes someone passed you. I passed 37 runners throughout the day, and wasn’t passed by anyone.