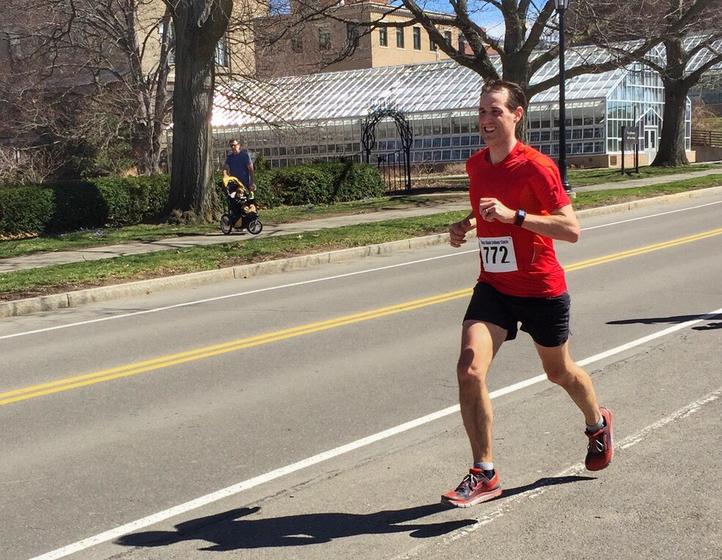 I'm in the midst of a 50-mile training plan, and fortunately this race fell at the end of a fallback week in my training. The ultramarathon plan is structured with three weeks of increasing mileage followed by a recovery (fallback) week. I had planned on conservatively running any races during my training, but since I had rested a lot, I figured, "Why not race it?"

I've been running outside all winter long. Heck, it was an easy winter to do that, with incredibly mild temperatures and very little natural precipitation. I hit a treadmill for the first time in early March due to torrential rain. This would be my fourth running of this early-season race, and each year the weather has been different. I would have been okay with freezing temperatures, given my winter running. I would have been unhappy with rain: too much chafing! I would have been unhappy with oppressive heat. As with most things serendipitous, today's forecast was a nice blend: not too cold, not too hot, and dry.

All four of us had signed up for the race (kids run free!) but Xander was going to stay home and relax before his noon call time for the school play. It'd be too tight for any one of us to get him back in time after running the 10K. Amy, Elizabeth and I headed off into the sunny morning and got to Barton Hall about a half hour before the race started. The temperatures were ideal for running in shorts: mid-50s and slowly warming. I wouldn't need arm sleeves today! A few other people were wearing tights and long sleeves, and I was sure I'd regret it if I made that choice. I enjoyed catching up with other runner friends before the race, did a few laps around Barton's beautiful new indoor track to warm up, and hit the bathroom a few times. The men's room line is always funny at a running race. None of us is used to waiting long when nature calls, but running races and rock concerts test our mettle.

I got outside just five minutes before the start and said a quick hello to Steve Gallow. He always takes wonderful photographs at races. I found a spot at the very front. I enjoy toeing the line. It gives me really good energy and I don't like stutter-stepping behind other runners in the mass of shoes and laces in a big race start. Running friends Mark Jacquet and Pete Kresock were near me, and we asked each other what our goals were. I hadn't thought much about mine, knowing that I have a fast PR that'd be tough to beat, and not knowing how my body would respond to being asked to race fast in the midst of long-distance training. I told them I was hoping for an hour and a half, which is the same estimate I'd given Elizabeth. She had wanted to know when to look for me, since she'd have finished the 10K by then. All I wanted to do was race myself. My evergreen goal is to continue to age gracefully and still do well among my age-group peers.

Joel Cisne yelled out some entertaining pre-race directives and Ian Golden sent us on our way. I locked into a fast pace and enjoyed watching some rabbits run by me, far faster and destined for winning their age groups. After a mile, a woman started running my pace right beside me. We were definitely not running a conversational pace (~6:45) so we didn't even exchange greetings, but we pushed each other hard. I kept wondering in my mind: am I pushing her, or is she pushing me? Or is it a little of both? It was nice to have a pacer alongside to keep challenging me, and the next few miles clicked by quickly.

I had decided to not carry water though I'd used a small handheld in the past. I thought that since it wasn't so hot, and since the course had four aid stations, I'd be fine. At the first aid station near mile 4, I ran toward the first outstretched hand and grabbed a refreshing glass of ... yellow Gatorade? Yuck. I stopped short, knowing that my stomach would regret it if I swallowed the sports drink. I turned around and ran ten feet back to the table. "Water?" Yes. There it was. I resumed running, but by now my fellow pacer was 50 feet ahead and charging toward the next duo of runners. I was on my own.

I passed a few others in the next miles, but mostly the middle part of the course was a mental pacing game. My average pace hovered between 6:45 and 6:52. I did some quick math (always entertaining while running) and was sure that if I kept my average pace under 7-minute miles, I'd hit my estimate. I tried to take advantage of the downhills and my long stride, but never really closed the gap to the remaining small group in front of me. I took water at the second aid station and dumped it on my neck to cool off. So refreshing! At about 9 miles I saw that one of the guys in the group ahead had fallen off his pace. I set an intention of passing him. A half mile later there's a short but significant hill. I put my head down and charged up, one foot in front of the other. As I crested the hill I pulled alongside him. With a burst of speed as gravity began assisting, I passed him as we ran past mile marker 10. We exchanged brief "attaboys" and I kept up the pace, trying to make sure I wasn't passed again.

At this point, we half marathoners start running past the slower participants of the 10K race. I shouted encouragement to runners, and delighted in the few kids that were out today, probably doing their first 10K races. It made me think of Xander and how far both of my kids have come with running. Soon I was back on Cornell's campus, and my mantra became "It's all downhill from here". Gradual, but downhill. I saw Elizabeth on the side of the road taking pictures with her cell phone. I was almost there! As I turned the corner and the finish line came into sight, I put in an extra burst of speed. I crossed the line at 1:28:55.

I had no idea exactly how I'd done in this race in prior years, but I knew it'd be close. It was very close, actually. I ran the course 20 seconds faster than any of my prior races. A course personal record! Elizabeth and I grabbed some post-race food and walked up the course a bit to see Amy and her friend Christina come in (read more about Amy's Skunk Cabbage 2017 race). I enjoyed watching and encouraging other runners as they approached the finish. It felt so good to sit on the cool curbside in the shade of a tree.

We all went back inside Barton and enjoyed socializing with other runners. It's such a great community, and everyone is super friendly. We stuck around for awards. Elizabeth won second in her age group and I won second masters. The first master, turns out, was 6 minutes faster than I was. Impossibly fast for me! I was really happy with the outcome, and the gift card for Finger Lakes Running & Triathlon Company was a sweet reward.

Just eight weeks left until Cayuga Trails 50. It'll be my second go at the distance. The training is going so well, but there's some big-mileage weeks ahead. No rest for the weary, and yes, a few more races! Before the big one, I am going to run in the May Day 5K, Rochester's Flower City Half, and the Tri for the Y.