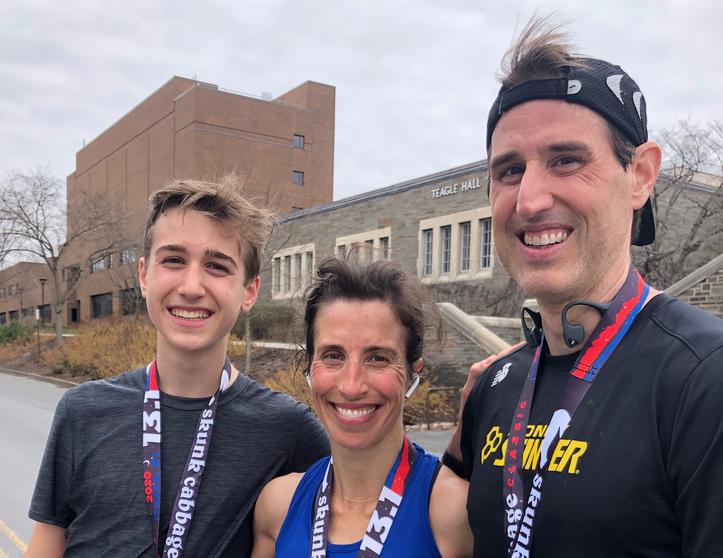 It was no surprise that the Skunk Cabbage Half Marathon was canceled shortly after the scope of the coronavirus pandemic became apparent. That said, this run is a staple of my racing calendar. It’s a harbinger of spring, when we all emerge (not literally) from hibernation and enjoy the camaraderie of racing as spring starts to emerge.

Along with Amy and Xander, I’ve been training for a marathon over Memorial Day weekend. When that, too, was canceled, our reaction was immediate: of course we were still going to run the marathon! We’d just do it right here, in our backyard. It was only natural, then, that we’d still run the Skunk, because it IS in our backyard.

I half expected to see a lot of local runners on the course today, and while there were some runners out, we had the course mostly to ourselves. Elizabeth was our roving water stop, driving to intersections throughout the course in case we needed anything. We gave Amy a 10 minute head-start. Then Xander and I, staggered by a few minutes, chased after her. The start line, usually a cacophony of people catching up and flinging away pre-race anxiety at the same time, was void of people. Literally. I started my run shortly after 10a with the only pomp and circumstance coming from my daughter.

Shortly after starting the run, I saw Steve Ryan and a friend running back toward campus. I also saw John Hohm running shortly after I turned on Game Farm Road, too. I wondered, how many other runners would I see?

I lamented the lack of facilities at the start. Cornell’s campus is, after all, shut down. I had to pee from the start, but promised myself if I still had to pee, I could use the woods about 2 miles in. I kept that promise, peeling off the road for a few seconds and then resumed my run. My heart sank briefly as I struggled with my watch post-pee, and ended up ending my workout tracking prematurely. No bother, I thought, as I could just start it again and merge my Strava tracks after the run.

Laurel McIntyre was at the intersection of Game Farm and Stevenson, running back and forth holding a homemade sign. I loved seeing her enthusiasm and support! The turn onto Dodge is really the only tricky one of the race. Without an aid station there, I was mildly concerned when I saw Xander, about 100 yards ahead of me, miss the turn. Oh no! We had carefully done a course preview at home, and he’d dutifully written turn-by-turn directions on his hand. I called his cell phone when I reached that intersection and was sure it was him, further down the road. I got him back on course, but lost a few minutes as I waited for him to see me before I started running again. This is one of the hardest parts of the course for me, since most of Dodge is uphill. It felt blessedly short, mostly due to the lack of runners that could pass me, and I was soon on the beautiful straight stretch of Ellis Hollow Road.

Joel Cisne, who I’d seen running in his banana costume in my first mile (he was finishing his race) drove by in his car, enthusiastically clanging a whole set of cowbells. More cowbell? Not today, not with Joel. He’s a local legend, and never disappoints with his support of a fellow runner. I came upon Elizabeth, who had carefully used sidewalk chalk to pen messages of support on the shoulder (see video below). That was so cool! Never in a race have I had so many personal notes to spur me onwards!

I saw Tonya Engst, running the opposite direction, and we enthusiastically waved to each other. I’d see her once more, about 6 miles later. I passed Amy shortly before the turn onto Ellis Hollow Creek. She was looking good. Elizabeth was parked with our car just after the turn, and I took solace in knowing I was halfway through the race. This was a beautiful stretch of the course and I took time to look around. Amidst the general brown color of everything, bright green shoots of foliage were growing out of the ground just off the shoulder. Spring is coming, and with it, all sorts of lush colors that we know and love here in upstate New York. That hopefulness almost made up for passing by what’s usually a hasher-staffed aid station around mile 9 that offers up beer in addition to water. I was carrying my own water today, but a few frothy ounces are part of this race’s personality. I missed that today.

The Turkey Hill climb was tough as usual, but short, and I stopped at the top to glance back and see if Xander was making all the right turns. I also took a photo of the COVID-19 lawn signs (advertising where to call for more information) that seemed prevalent here in Dryden. Definitely not our normal race on a normal day. I saw Elizabeth once more after the turn onto Stevenson. She’d chalked more messages on the road, and I was grateful for them. I was about to hit the final few turns of the race course, the last three miles. I was feeling pretty comfortable, and decided in the last mile to pick up the pace a bit. 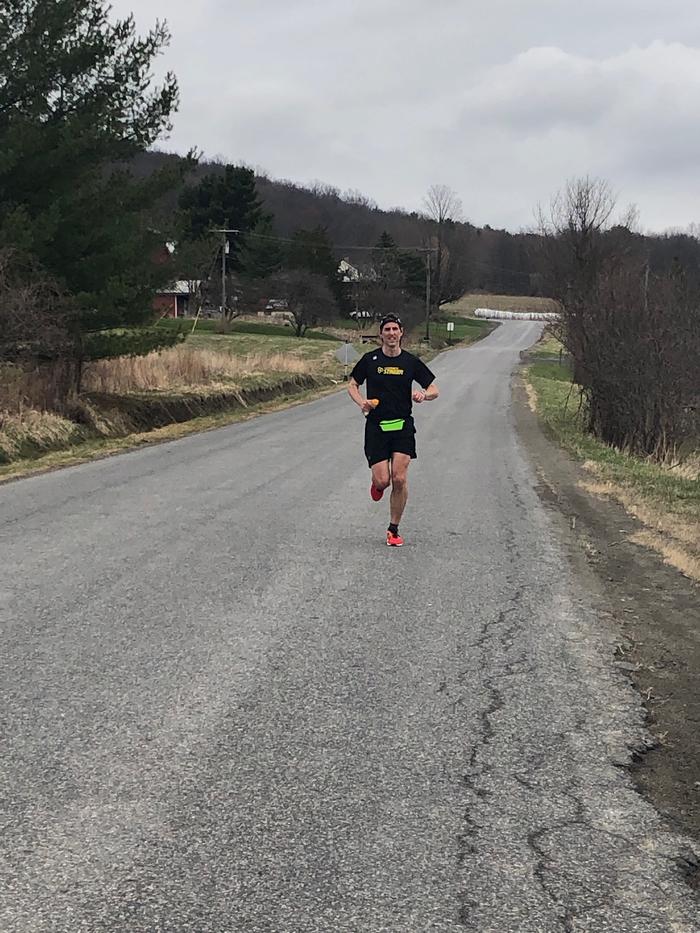 On the course, 4 miles from the finish

As I ran that last mile, I thought about what was different about this race. No Steve Gallow, taking fantastic pictures of us as we ran down the final minutes of the course. No post-race belly filling and mingling with friends in Barton Hall. No Ian Golden shouting out our names as we crossed the finish line. No finish line clock, ticking down the seconds to motivate my legs at the last minute. No people at all, actually, at the finish line. It was just me, on just another day, and I was grateful. 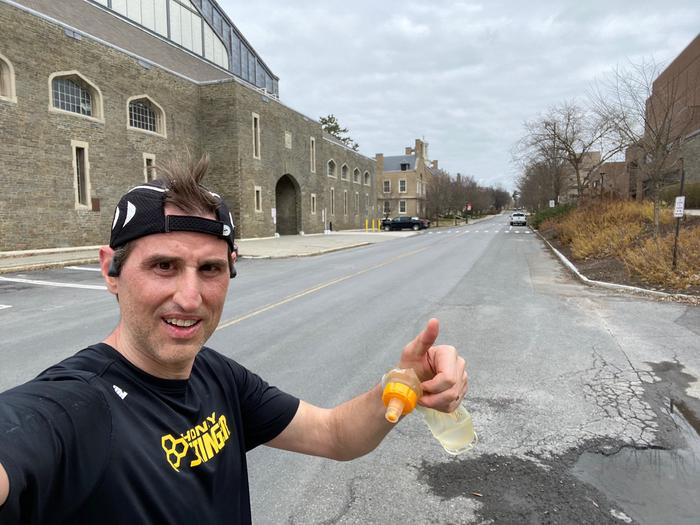 Alex Kleinerman and John Hohm put out race medals on a stone wall and near the doors to Barton, just in case we wanted to take home the recognition of our efforts instead of having to pick them up another time. I thought that was incredibly cool. 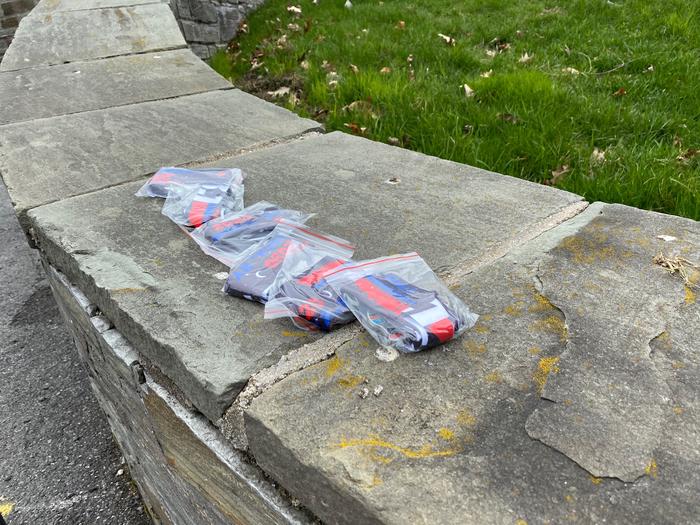 Medals at the finish line

Elizabeth pulled up a few seconds later and we watched Xander and Amy finish out their races. We had the foresight to place a take-out order with Taste of Thai Express, so picked that up on the way home and enjoyed sharing post-race stories around our dining room table. 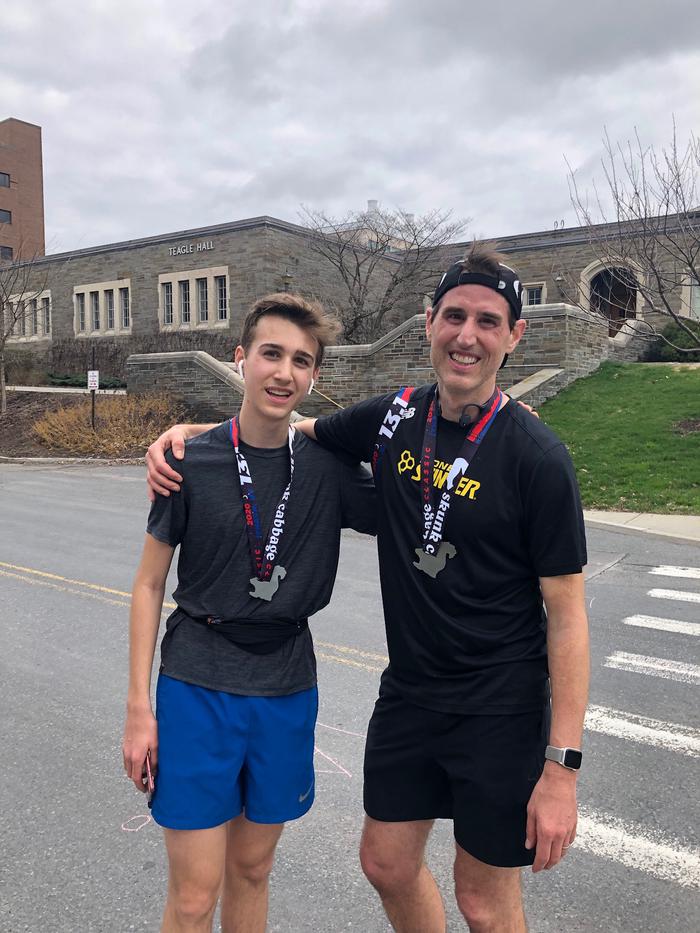 Xander and me at the finish line

It was a fantastic shared experience for our family. We’re still running throughout this pandemic, but we’re definitely doing it alone. It’s still so much better with others, but for now, reading the stories from others who did similar things today will stand in quite nicely. I’m looking forward to racing with all of my friends again, though. Next year? Yeah, let’s do that.