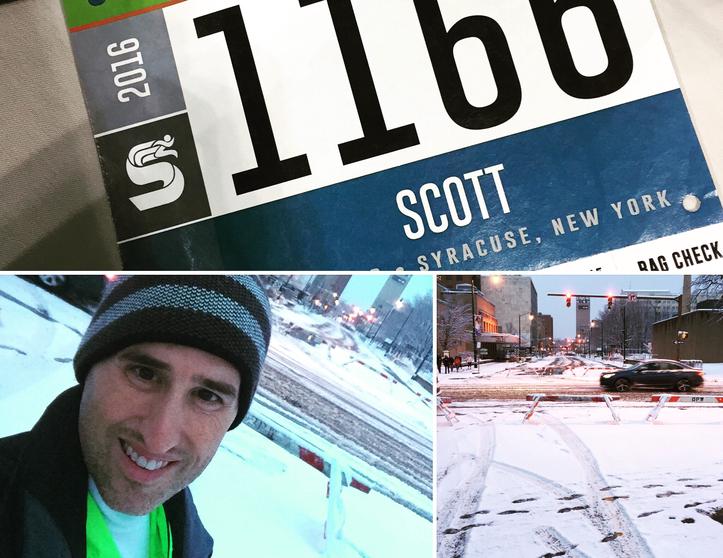 The fourth running of Syracuse's half marathon was supposed to be more temperate, as the organizers moved the race forward a few weeks after some brutally cold races. This year, Mother Nature had something else in mind. The forecast was accompanied by a winter weather advisory AND a wind advisory, so I could count on this race being memorable. I thought as I was running, though, that if Dickens was running this race, he would have summarized it thusly:

It was the best of times (ahem, wait, NO!), it was definitely the worst of times.

I arrived early after a harrowing drive up Route 81. Starting in Dryden, the roads got so bad, and had not yet been treated, that driving felt more like driving antique cars on a track at the fair. There was a single lane to travel, right in the middle of the road. I love our Honda Pilot, which steadfastly fulfilled its duties and got me there safely. Exiting into a snow-covered parking lot, I decided to trade my Brooks Pure Flows for Altra Lone Peak trail shoes. Turned out to be a wise choice.

I'll cut to the chase and get to the race. It started right on time, and we were off on a slush-covered route that ran straight northeast from the start. I marveled at the commitment of the volunteers and photographers that were out in the horrible conditions (26 degrees and wind). I had opted for a compression top, compression thermal tights and a lime green windbreaker, along with a hat and light gloves. I was glad for this, as around mile 6 the weather turned WORSE. A driving wind and hail had us running heads down, trying our best to shield our faces from the onslaught (I was in a group of people at this point, running side-by-side). 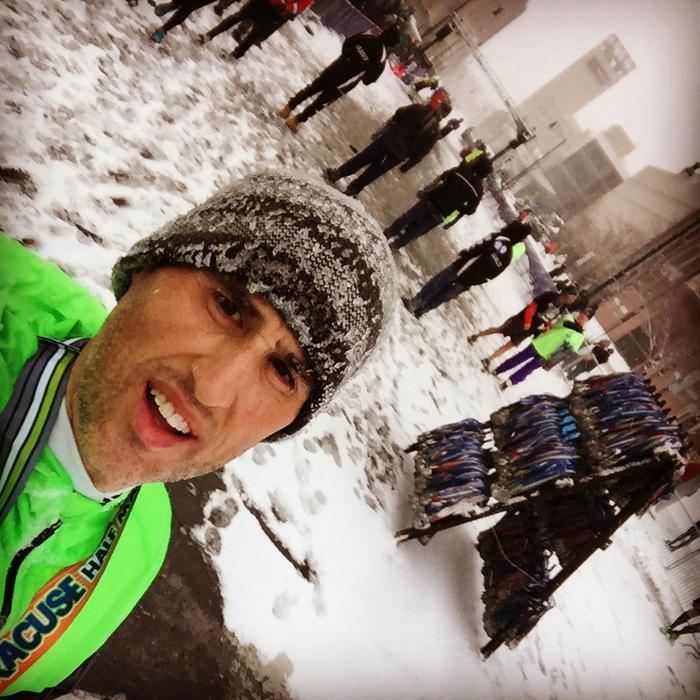 The hail turned to a full-on lake-effect snowstorm that did not relent 'til the finish, and only then because I got in my car to change into dry clothes. At times during the last half of the race, I turned my windbreaker hood to the side to protect the side of my face from the wind and snow, which turned out to be quite effective. For most of the second half, Syracuse's snowy streets were interrupted only be a straight single-track line, where all runners had run the same steps. I could only sympathize for those behind me that had to deal with this compressed track as it further iced over. We might as well have been running on trail!

I was so grateful to finish, and felt like I'd been through something truly unique. These were the worst conditions I've ever run in. I had ice in my eyebrows and weighing down my eyelashes, and men with beards were sporting chunks of ice as they wandered into the On Center, eager for warmth and pancakes.

The post-race food was good, but sparingly given. I had a pancake (singular), slice of bacon, medallion of sausage and a small slice of pizza, but also indulged at the less stringently monitored table of bagels, bananas and chocolate milk.

This was NOT a day to have a personal record. The lack of traction and inclement weather made me grateful to finish as strong as I could. We'll save the PRs for later, okay?

Well, this race was SO extreme it ended up in Runner's World. There's a video on the page by a spectator near the end of the race, and it took several viewings to realize it was ME in the lime green windbreaker leading the pack 40 seconds in. What are the chances?