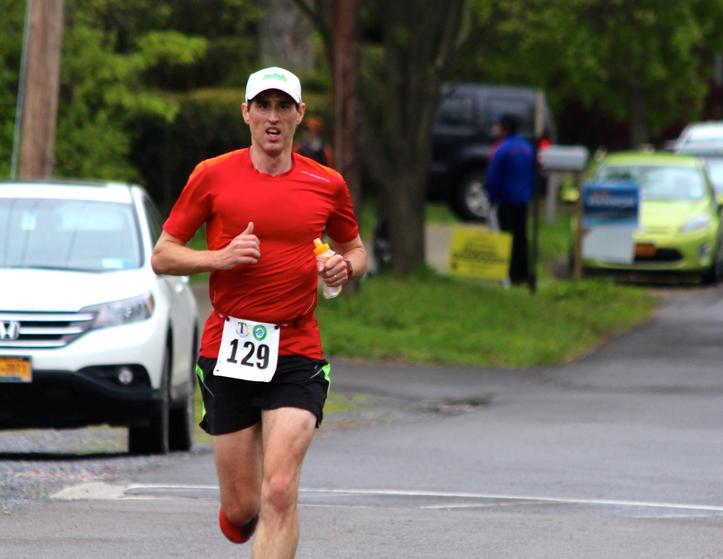 I always love the May Day 5K, and it’s not just because my wife Amy is one of the race organizers. It’s literally around the corner from my house and follows the same running route I use for many of my training runs. Plus, it’s a community race, so I can always count on seeing many friends and their families there. It’s such a great event! May 13, 2017 would be bittersweet for our family, since Amy and her co-organizers had decided this would be the last year they’d organize the race. It benefits the school district in so many ways, and I know they struggled with the decision to move on to focus on other things after organizing the race for 7 years. 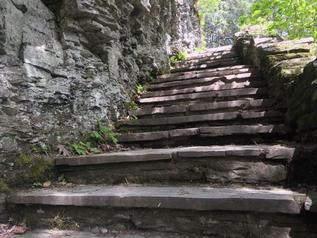 I opted for the 5K distance this year (there’s a 5 mile distance offered, too) since I’d be in the midst of training for my second go at the 50-mile distance at Cayuga Trails 50 just 4 weeks later. The race fell at the end of one of my last “big weeks” of training, where I’d log over 60 miles. I’d have to see how my legs held up trying to run fast while having run a lot of slower trail miles in preparation. The 50-mile plan calls for a lot of back-to-back long runs on the weekend, and this week was no exception. I needed 25 miles and 12 miles for this duo, and I decided that I’d rather have the 5K on the 12 mile day. I took Friday off from work so I could spend the morning on the 50-mile course at Buttermilk and Treman.

Amy spent the bulk of Friday at the school managing the packet pick-up process. I drove Xander to his play performance of Joseph and the Technicolor Dreamcoat and then headed to see if I could help with packet pick-up. Amy, Elizabeth and I enjoyed spaghetti dinner takeout from the race’s companion fundraiser dinner. Right around the end of packet pick-up, it started to rain. Not a great harbinger for the next day! We spent a few hours at home before Amy and I headed back to Newfield to pick Xander up after his performance.

I decided to get my remaining mileage in before the race on Saturday. That way, I’d be DONE when I finished the race, having run a total of 12 miles for the day. I headed to Taughannock at 6:30 for 8.9 miles on the rim and base trails. These trails were the bread and butter of my training, and I especially enjoyed being on them this morning. The weather had looked iffy for the day, threatening rain in the forecast. Despite a few sprinkles during my trail run, it did not materialize! On the way home, I drove the 5K and 5 mile routes, placing mile markers at the appropriate spots.

This was the first year they’ve offered teams at this race, so I signed up with Elizabeth and Xander to form a family team. We called ourselves the Leapin' Lizards. I really enjoyed walking around and talking with friends before the race, and there was ample time to do that. Xander sang the national anthem again this year, just before the fun run kids shot off for their short run around the school grounds. Soon it was our turn, and I lined up near the front, just behind the group of optimistic kids toeing the start line.

The first hundred yards were interesting, as usual, jockeying for position and bobbing and weaving around the kids. The pecking order was a bit clearer by the time we rounded the first curve. I tried to make out who in front of me was a 5-miler and would was in my 5K race, but it’s impossible from behind. As we approached the first mile, the 5-milers would head off to the left for an out-and-back part of the course. I spotted friend Columbia Warren ahead, and I knew he was out for 5 miles. I made it a goal to catch him to say hello before he turned. After the turn, Keith Eggleston of Groton was the only runner remaining in front of me. He was moving right along, and I knew I couldn’t run any faster. I made it a goal to not lose too much ground to him, and to not get caught by the next runner. 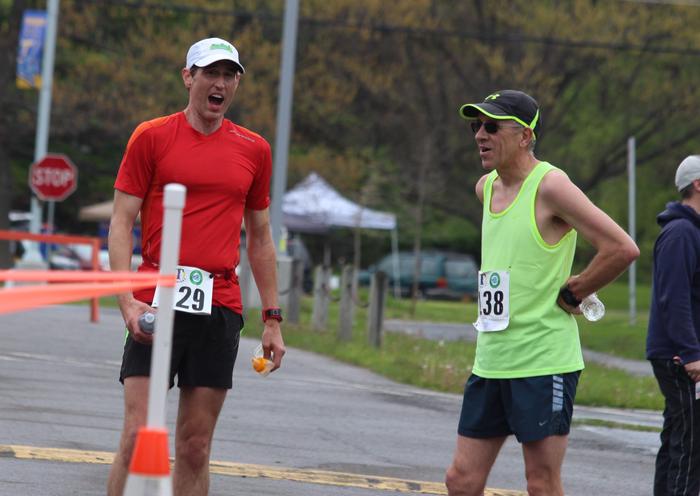 Keith and me, seconds after I finished 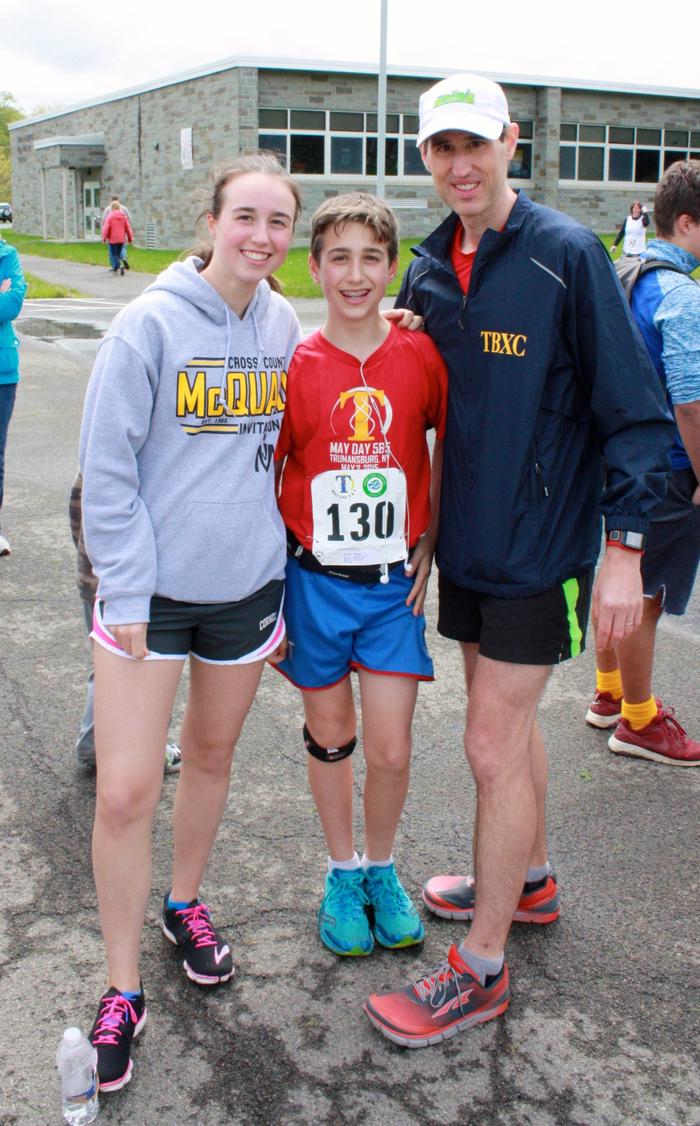 Leapin Lizards with the team win!

Post-race was as fun as pre-race, with plenty of high-fives, smiling families and good food. I hopped in to help scoop ice cream to a never-ending line of dessert seekers. My friend Torie and I were a good team, serving up all types of Neapolitan combinations. Behind us, Dr. Jon Hamm of Life is Motion Chiropractic was working the kinks out of racers. After I hung up my ice cream scoop, I decided to give chiropractic care a try with Dr. Hamm. OH MY GOSH. He stretched my legs in ways they’ve not been stretched before. I’d never seen a chiropractor before. The weekend’s mileage had left my leg muscles in a tight mess, and just the press of a finger in the right (wrong?) spot made me shriek in (good?) pain. I won an initial consultation with him in the silent auction the following week, so I’m in for more of the same sometime soon. 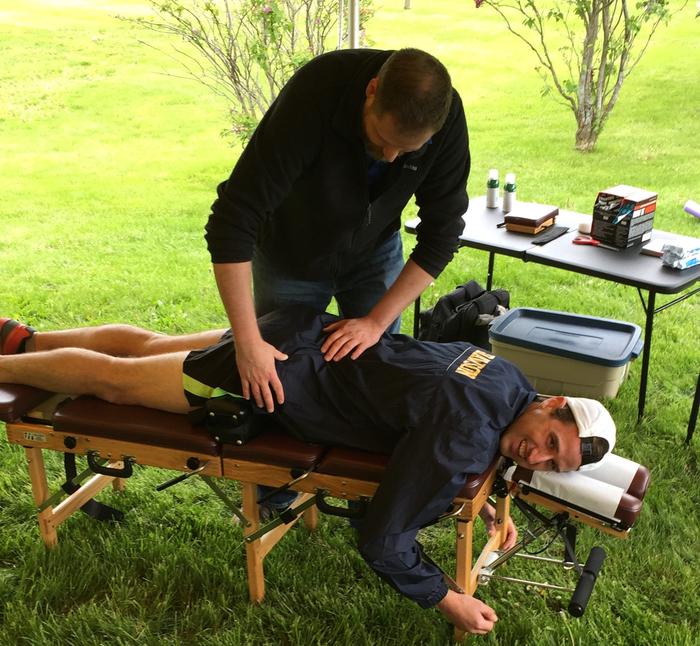 The Race Lives On

In the weeks following the race, Amy and her co-organizers lobbied some parents who they thought may be interested in continuing the race to benefit the school. Their persistence paid off, and there will be a May Day race in 2018! What they’ve built is nothing short of spectacular. The May Day race is a wonderful fitness-centered community event that I consider the unofficial start of Spring. Plus, the race has raised tens of thousands of dollars to improve the Trumansburg schools. If you’re looking for a fun 5K to train for next year, I highly recommend this one. I’ll see you there!