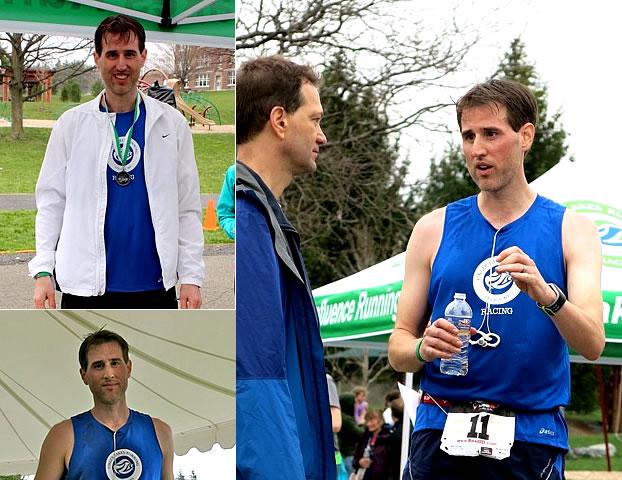 My wife co-organizes this race along with Christina Luglan and Jodi Latini, so the anticipation builds for this race so much more than any other race! They did a fantastic job this year, the first that they offered both a 5K and 5 mile distance. I opted for the latter, and it was a tough course! This race, held in my hometown of Trumansburg, has such a nice, small-town feel despite the 400+ racer turnout. So many familiar faces and fun people to talk to!

It was a cold start, around 50 and overcast, and I wore my FLTRC singlet without anything underneath ... I was really feeling the cold! I went out fast, but managed to keep all of my mile splits within 50 seconds of each other, so that was good. The low temperature definitely played into being able to do this!

After 2 miles (and the down/up of Rabbit Run) I urged two teens with water to splash me, which they did. Downright refreshing after the climb, and I'm sure it was fun for them, too. After a 1.9mi out-and-back on Rabbit Run, the 5M course rejoins the 5K runners and walkers for the duration, so I ran past walkers and 5K runners chasing the runner who passed me on Rabbit Run. I held an overall 3rd place until mile 4, where I got an incredibly uncomfortable stomach cramp and lost some pace. I got passed here, which motivated me to pick up the pace again despite the pain and finish strong.

I was first male master for the 5M with a 32:50, and Amy was the first female master for the 5K. Some nice symmetry there! The kids also both ran this race, turning in great performances. The local 5K is always fun for me, both because of the home-field advantage (hey, I train on these streets!) and the friendly local faces.