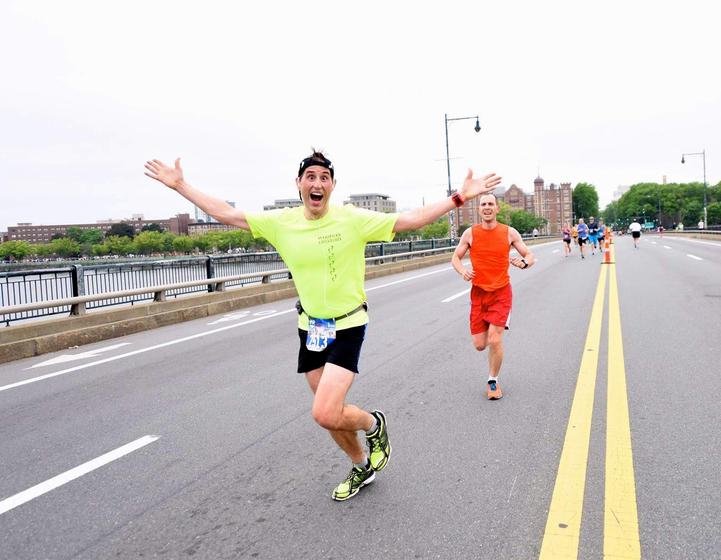 My "year of the half marathon" rolls on, this time with a big out-of-state race! We rent our home for Cornell graduation, so found ourselves in need of a trip. We looked initially at Buffalo for the marathon, but the kids would have to spectate. We found Boston's Run to Remember as a half marathon option, and as a bonus there was no age restriction. So, this could be Xander's first half marathon! Xander and Elizabeth both trained for the race, enough so that they'd be able to finish it in a respectable time, and we packed our bags.

We spent Friday evening visiting my brother, his wife Sophie and son Marcus. We had a really nice homemade Ethiopian dinner and enjoyed a bottle of wine before talking and turning in for the evening. Saturday morning we headed into the city after a breakfast with them, and were able to get to the expo and our hotel for a comfortable check-in and packet pick-up. We stayed at the Seaport Hotel, which had the added bonus of being right at the start/finish line of the race, and right across the street from the expo.

We headed out into the relatively scorching heat of the day on foot. Saturday's high was 95 degrees, while respite would come overnight for a race temperature Sunday morning in the mid 60s. We walked a total of about 8 miles throughout the day in Boston, stopping at Faneuil Hall, Government Center, Anna's Taqueria in the Back Bay, Lederman Park, the Science Museum (a great iMax movie about the National Parks, plus a ride on a duck tour, something new for us), Galleria Mall (Starbucks, anyone?), and then back to the Seaport Hotel after some delicious pizza at Crush on State Street. Whew! 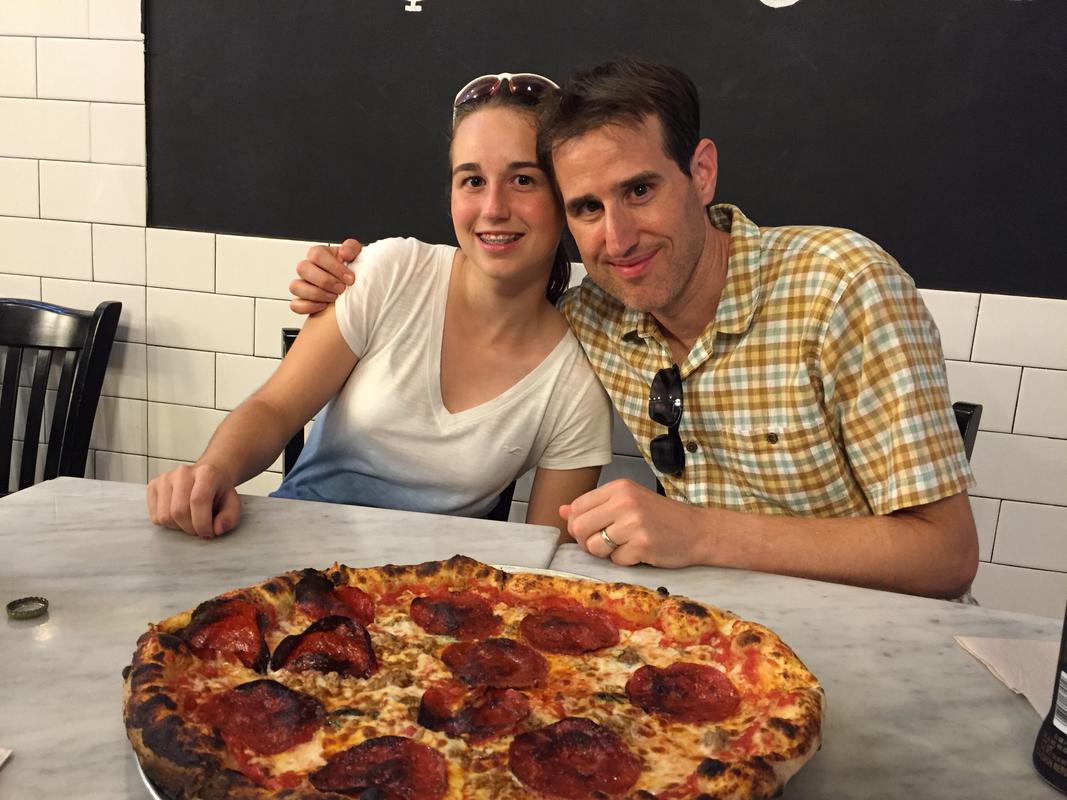 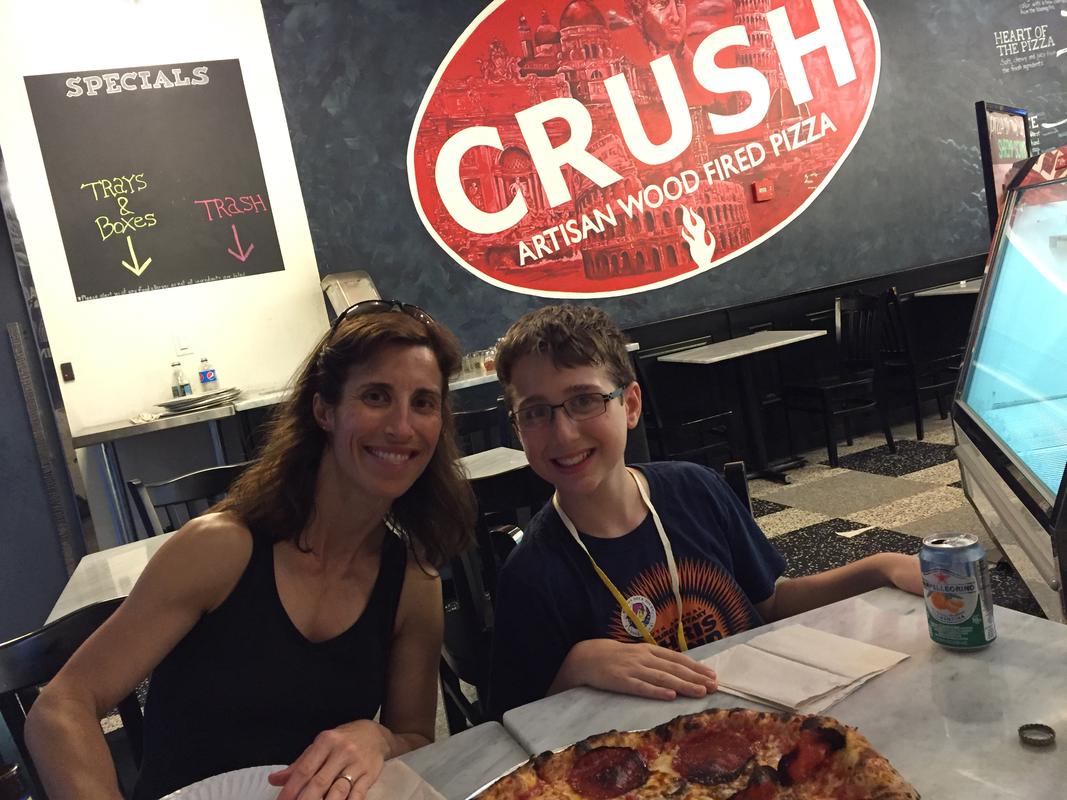 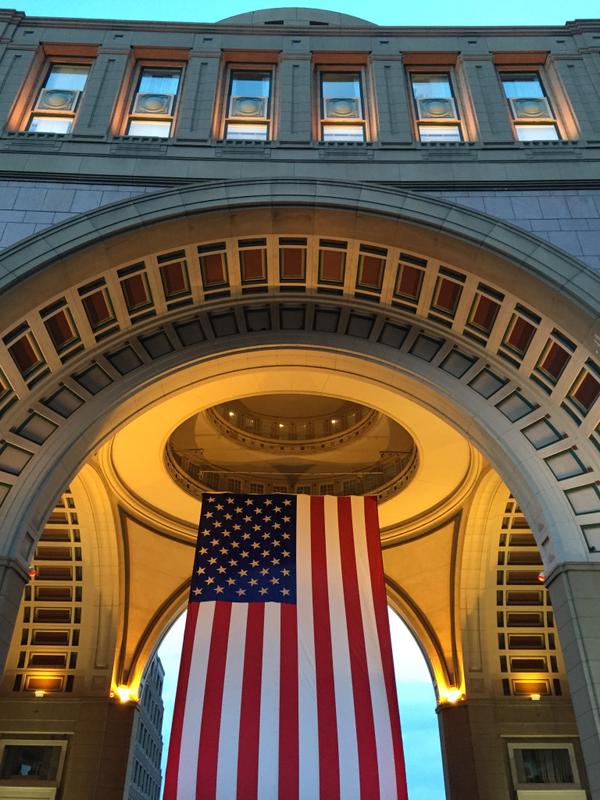 Race morning came quickly, and I really enjoyed the lack of pressure provided by the location of our hotel! We planned to get downstairs just 20 minutes prior to the start of the race, opting for the luxury of our hotel bathroom compared with the port-a-potties scattered throughout the start area. We cleared through a security line quickly, took a few family pictures, and bid adieu to each other. 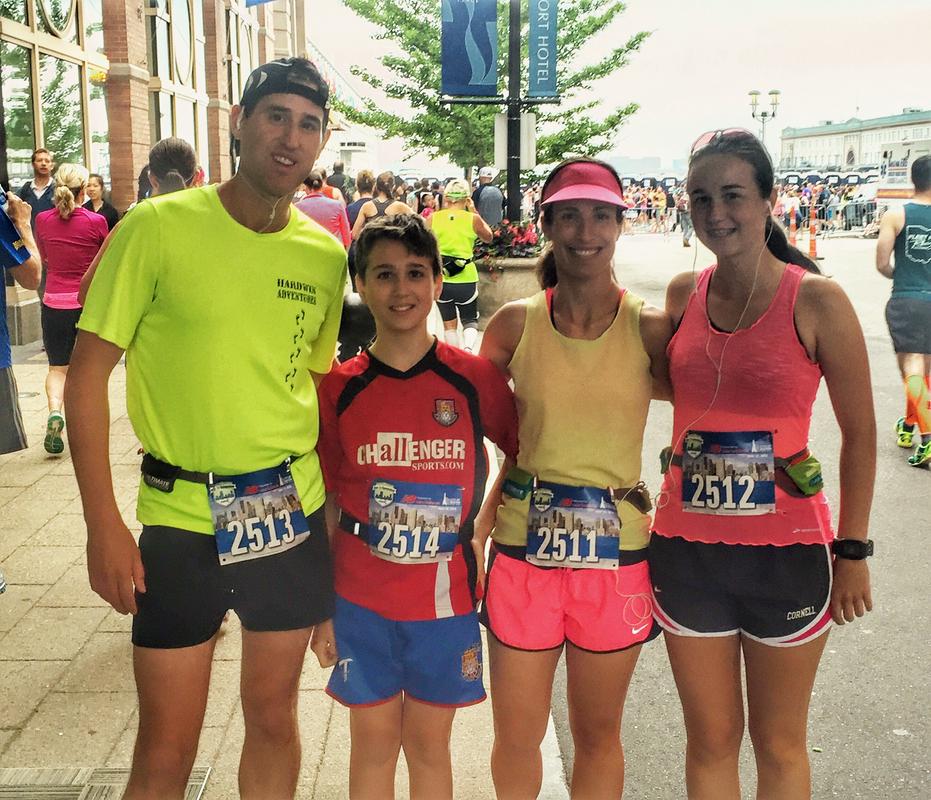 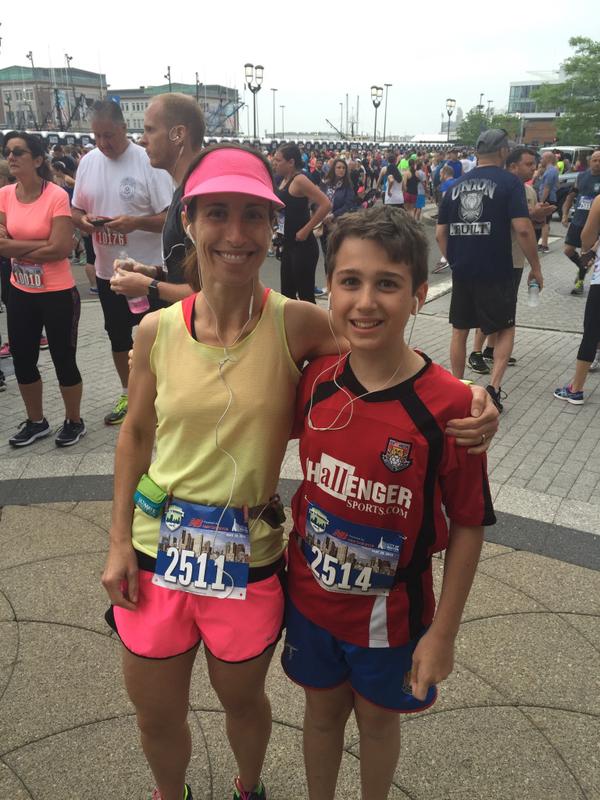 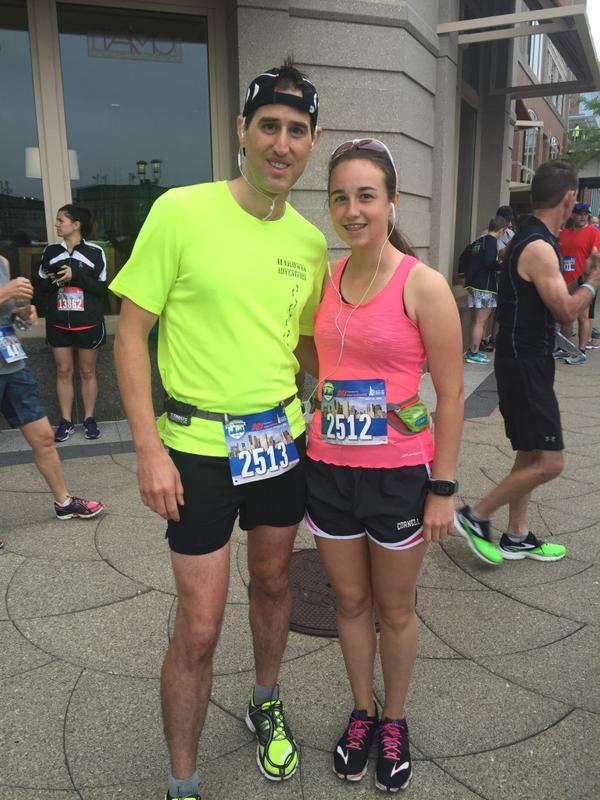 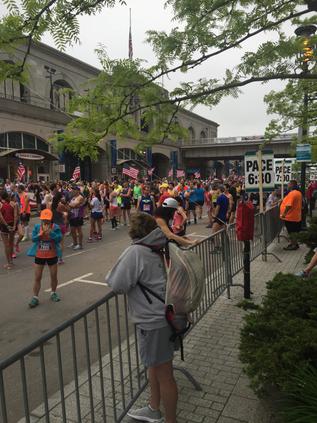 Lining up at the start

I headed off to line up near the beginning, since my goal was consistent with prior half marathons this year, with a pace between 6:30 and 7 minutes per mile. Elizabeth lined up at her pace, and Amy and Xander lined up together since they were running together. The pre-race remarks and national anthem were quite nice, and a nice commemoration of first responders who had lost their lives in the line of duty. A poignant occasion, given the loss of two officers recently. There were a lot of runners wearing shirts from their police and fire departments. Soon, we were off and running across the bridge on Seaport Boulevard, heading into the heart of Boston.

I didn't look at my watch until mile 3, running along Beacon Street. I was flagging a bit, and felt my pace dropping. I am much better at perceiving pace now, and as I look back, I dropped 20 seconds per mile in that stretch. I reached for some water at the next aid station, and felt a good surge from that. In my haste to pack for the weekend, I didn't pack a handheld (would have been nice) or any kind of nutrition. I reached for a gatorade at the tail of the aid station before starting running again, and a runner blew by my right side, brushing my hand back and and away from the cup. He was apologetic, but that really sucked. I wanted what was in the glass. I started running again, and the ticker tape in my head scrolled by, saying "No electrolytes for you just now, young man."

We took a right on Harvard Bridge, crossing the Charles to begin the two out-and-back sections of the course along Memorial Drive. Right around mile 6, police cars lined the street, lights flashing, with officers in front of their cars clapping for US. I felt an adrenaline surge as I clapped for THEM, and shouted "thank you!" as I ran by. Soon we turned again heading back toward the Harvard Bridge, and I saw Elizabeth pass by me going the other direction. She looked really strong, and was smiling. It was nice to see family amid the thousands of runners!

Shortly after the second turnaround and after seeing Elizabeth, I came upon an aid station handing out Gu! Oh, the serendipity. I had neglected to think about packing something for after an hour of working out, and as I grabbed the Gu (strawberry banana, mmm) from the volunteer, I was SO happy for the fortunate timing! I even featured it in one of my #365DayDraw sketches a few days later. 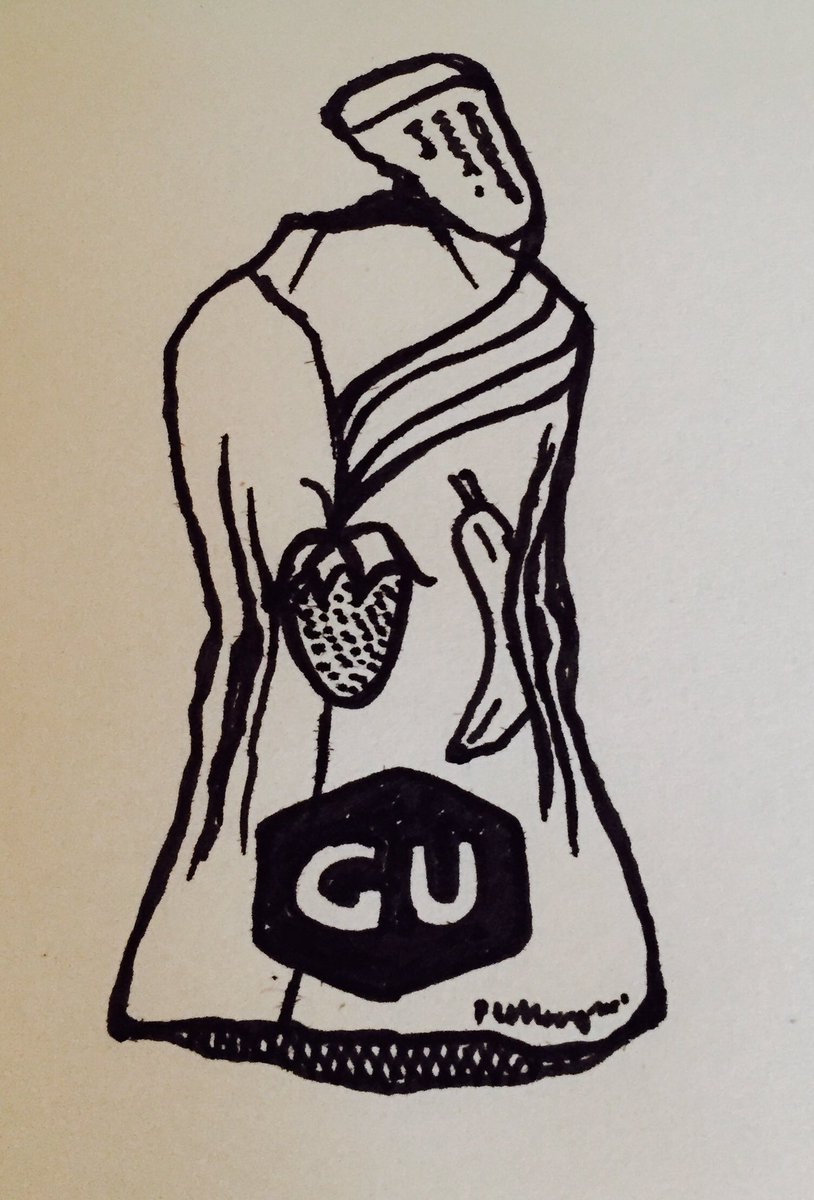 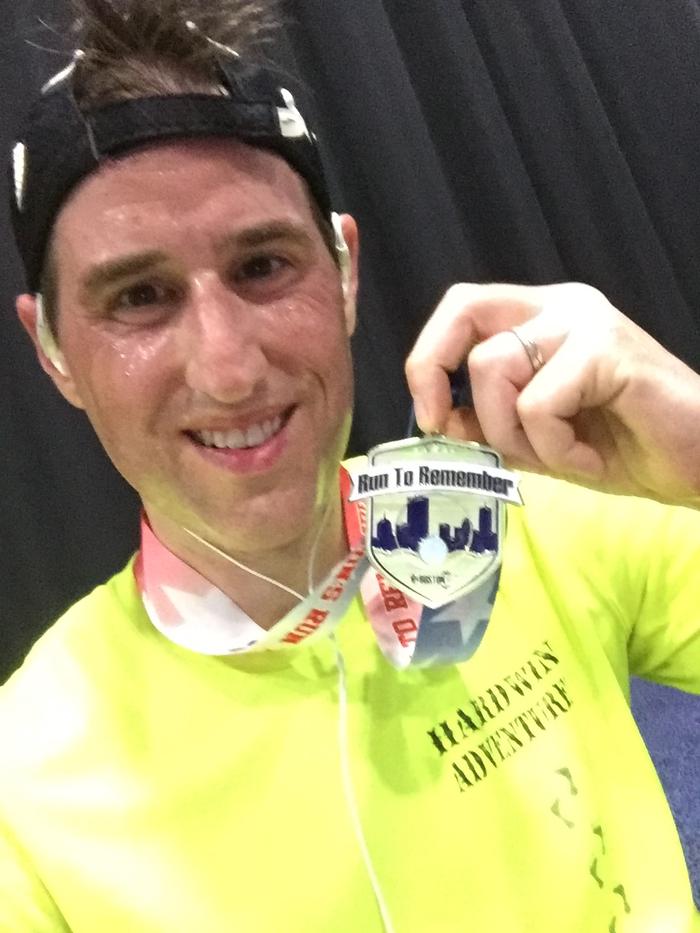 It must have been about mile 10 that I realized I was running with someone. I'd been trading places with some of the runners around me, but as was the case with the Wineglass Half where Jason Husted and I started running together, leading to my PR, I was in lockstep with the woman beside me. From the results, I learned she was Sarah Pandiscio (we finished at exactly the same time), and I think it was a mutual pacing effort. We didn't talk too much, just an unspoken impression that we were going to keep turning over as quick as we were and make it to the finish. I quickened by 10-15 seconds per mile for the last five miles, solely due to having her push from the side. She had recently run the Brooklyn Half, and was really happy to be pushed as well. Despite the fatigue I felt, I kept thinking two things during the last 3 miles: a) your body is trained and can take this kind of abuse, and b) the abuse is temporary. Soon we were across the finish and shuffled into the expo hall for medals and post-race victuals. 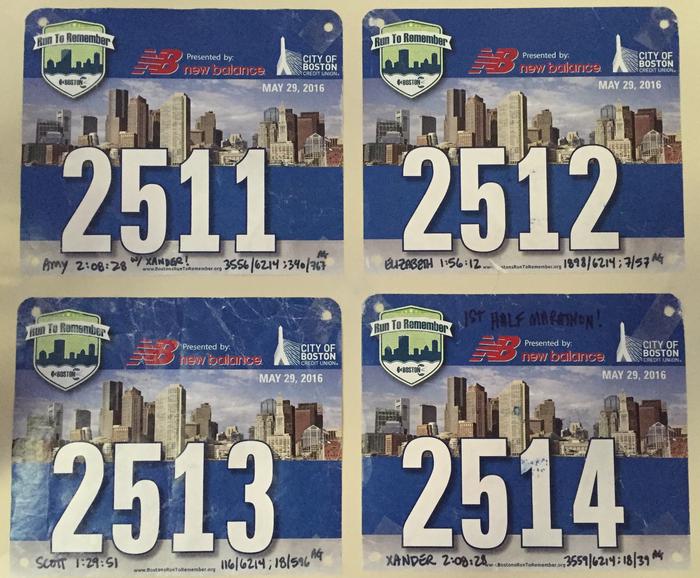 Four bibs, all from the same BIG race

Again, it was SO cool to have our hotel right across the street. I was able to get cleaned up and back over to the expo to see Elizabeth, Amy and Xander after they finished. We all had a great race, and especially Xander who finished with a sub 10-minute mile average pace! You should read all about his experience on Amy's site. We enjoyed our trip home after a stop at my brother's house, a recovery walk around Walden Pond and some refueling at Framingham Beer Works.