The guidebook in our townhouse rental gave two options for this hike. The first was shorter, but only after a longer drive on forest service roads; the second longer — anywhere from 12-14 miles — but no such drive. The forest service roads called for a four-wheel drive with high clearance, code for “don’t bring your Prius.”

We rented a small SUV from Hertz for this trip. When we picked up our Ford Escape from the Portland airport, we thought it’d be small yet suitable. The Hertz attendant asked if the gas was full as we were leaving. As I looked at the dash, I saw an indicator lit that always gives me anxiety. “Yeah, but the tire pressure light is on.” She was incredibly apologetic and asked us to get our stuff out of the rental so she could find us a suitable replacement. “Would an upgrade be all right with you?” Of course it would.

Fast forward to Todd Lake, where we pulled off the Cascade Lakes National Scenic Byway in our upgraded Ford Explorer at about noon. It’d been a great vehicle for our activities so far, with plenty of room to leave our trekking poles and shoes in the back in between hikes. At the end of the Todd Lake parking area we passed a metal gate that was flung open. The weathered sign warned us: NOT MAINTAINED FOR PASSENGER VEHICLES. The rutted, sandy and rocky path before us jumped uphill before looping out of sight. 5 miles. The guidebook said it’d take us a half hour. That’s some careful driving, I thought. I looked down near the parking brake and dropped our rental into four-wheel drive, the icon with the path and an iconic tree. We were off! 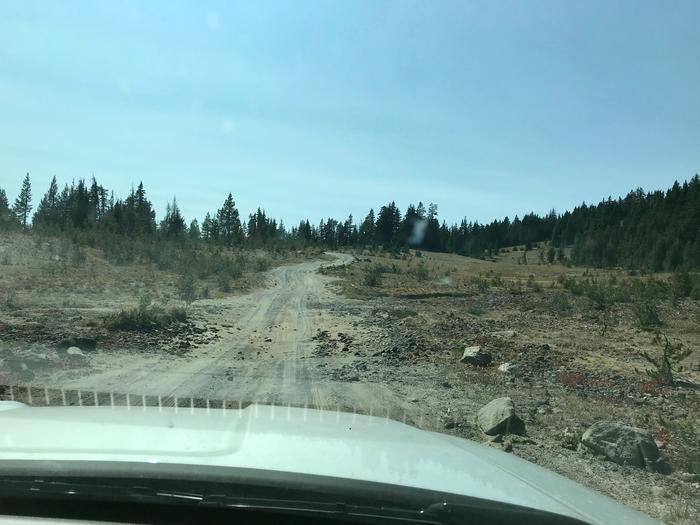 Not the greatest road, but passable!

Honestly, with the proper vehicle, the drive isn’t all that bad. You have to pray the entire way that a tire doesn’t blow, because addressing that on the narrow road would be a catastrophe. I thought about this the entire way up, though, knowing that if I had to run out to the trailhead I could do it. It would have been a nightmare, though. I breathed a sigh of relief when we arrived at the trailhead. The parking lot was bursting with cars and I awkwardly angled ours into what would pass as a space. We popped open the tailgate and enjoyed chips with salsa and guacamole before putting on our hiking shoes. 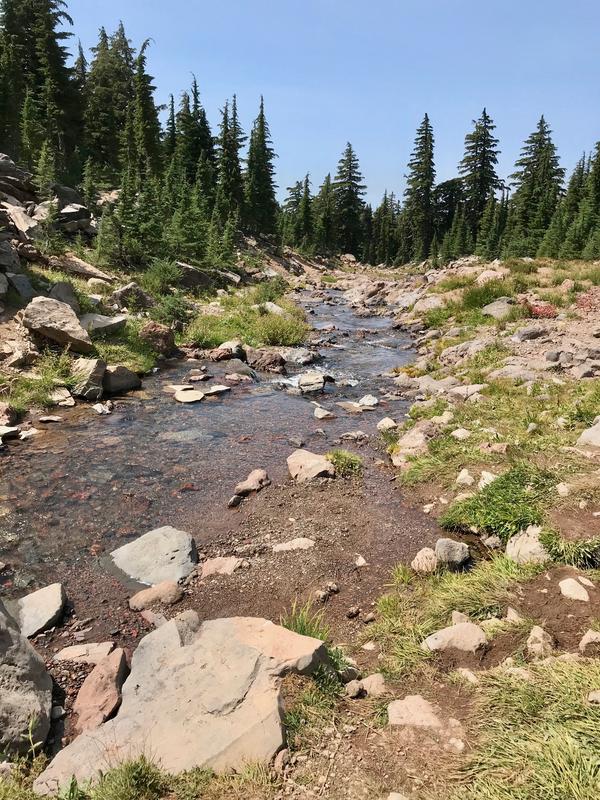 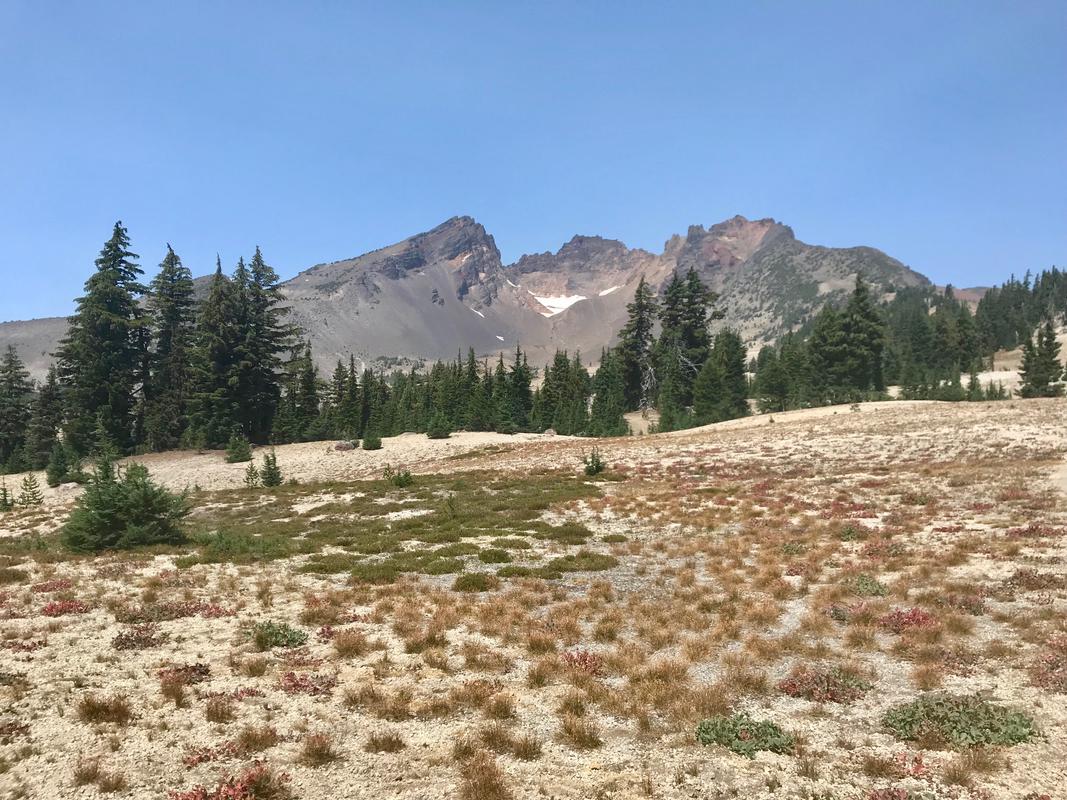 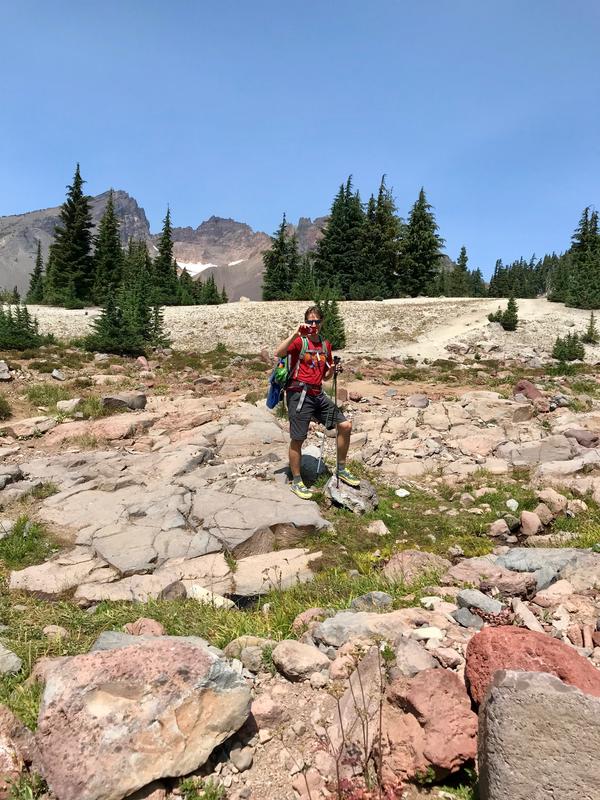 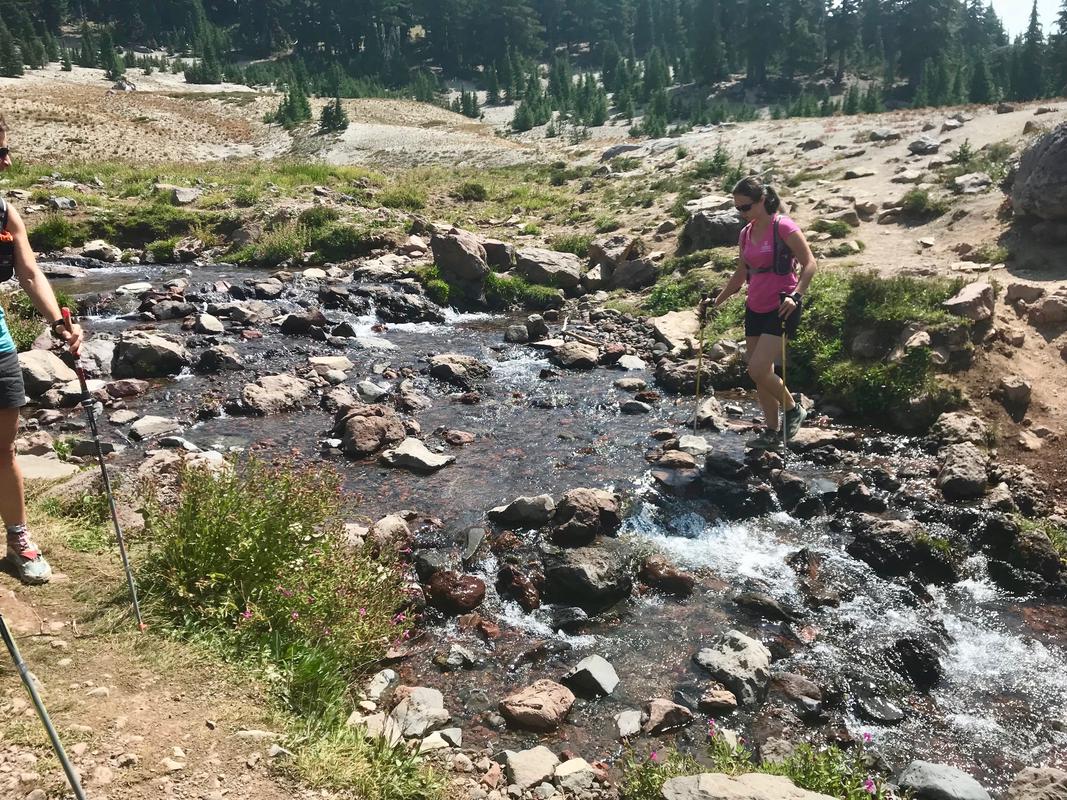 It is so true that you pay for most of this hike with the drive. The hike itself is non-taxing and incredibly beautiful. We enjoyed little cascades of water in Soda Creek for the first mile. Expansive views of Broken Top were before us and to our side for much of the hike. We crested the last rise before No-Name Lake just after just 2 miles of hiking. It was breathtaking. 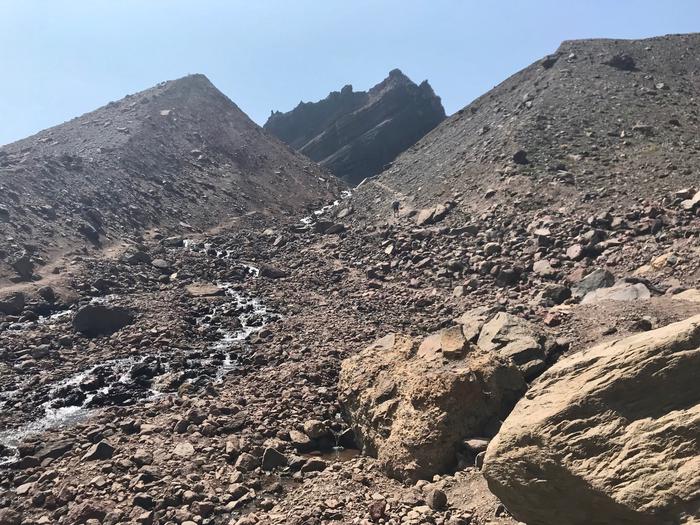 No-Name Lake just over the crest

I caught a faint whiff of death when the lake came into view. We’d heard about some elk that had mysteriously died in the area. They littered the snowfield on the far side of the lake. If you didn’t know any better, you’d have thought they were rocks. 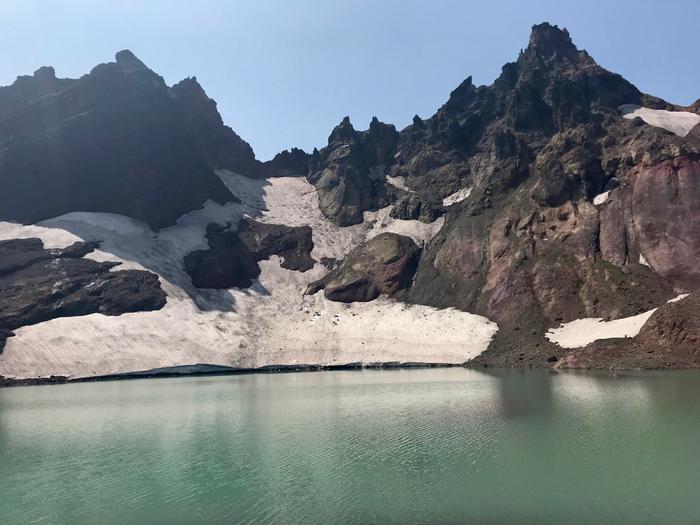 A herd of dead elk on the far snowbank

We wondered aloud, with many others, what had happened. It was a mystery until just the prior day. Post-hike, we read that officials believed the herd was killed by an avalanche the prior season, and melting snow had revealed them just now.

The smell didn’t linger long, though, and we continued along the edge of the lake toward a small rise to the ridge line. As foreshadowed by the fullness of the parking lot, there were a lot of hikers in this area. Most were concentrated on the ridge and we hiked the short stretch of uphill to join them. The view was nothing short of amazing. The wildfire haze was not as bad as prior days and we could see far. From left to right we could see Broken Top, South Sister, Middle Sister, North Sister, Mount Washington, Three Fingered Jack, Mount Jefferson and Mount Hood. We found a comfortable spot at the top to enjoy some cheese and crackers before heading back down. 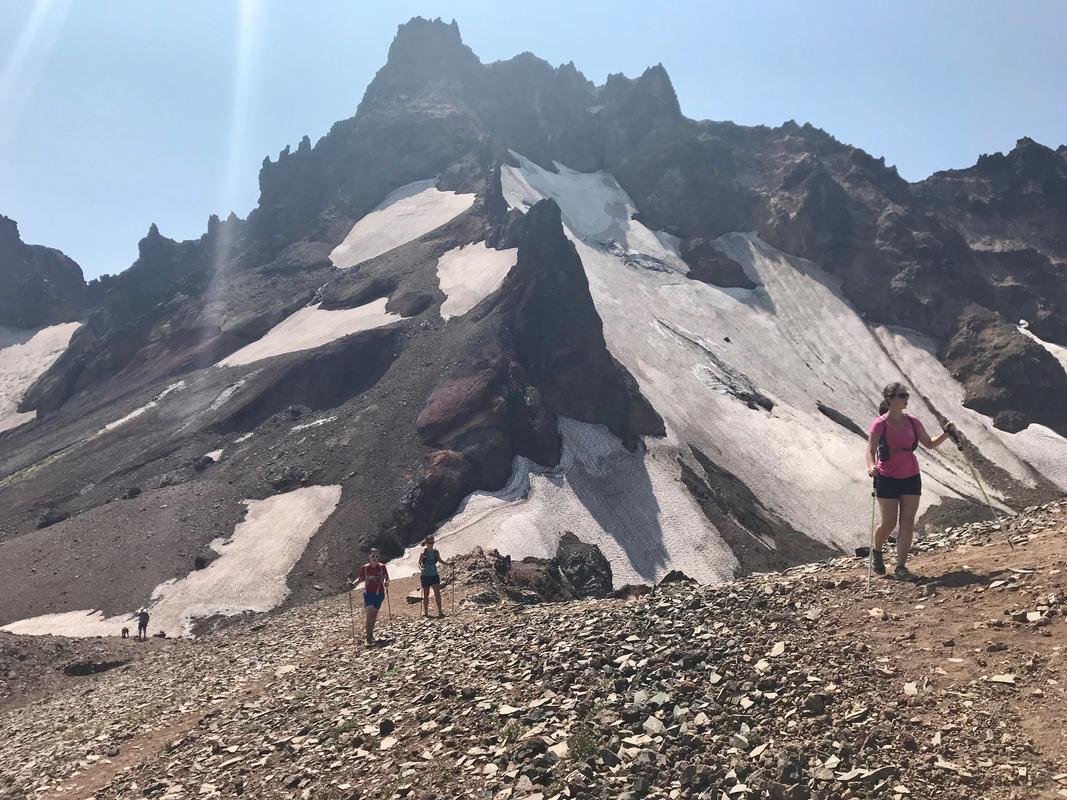 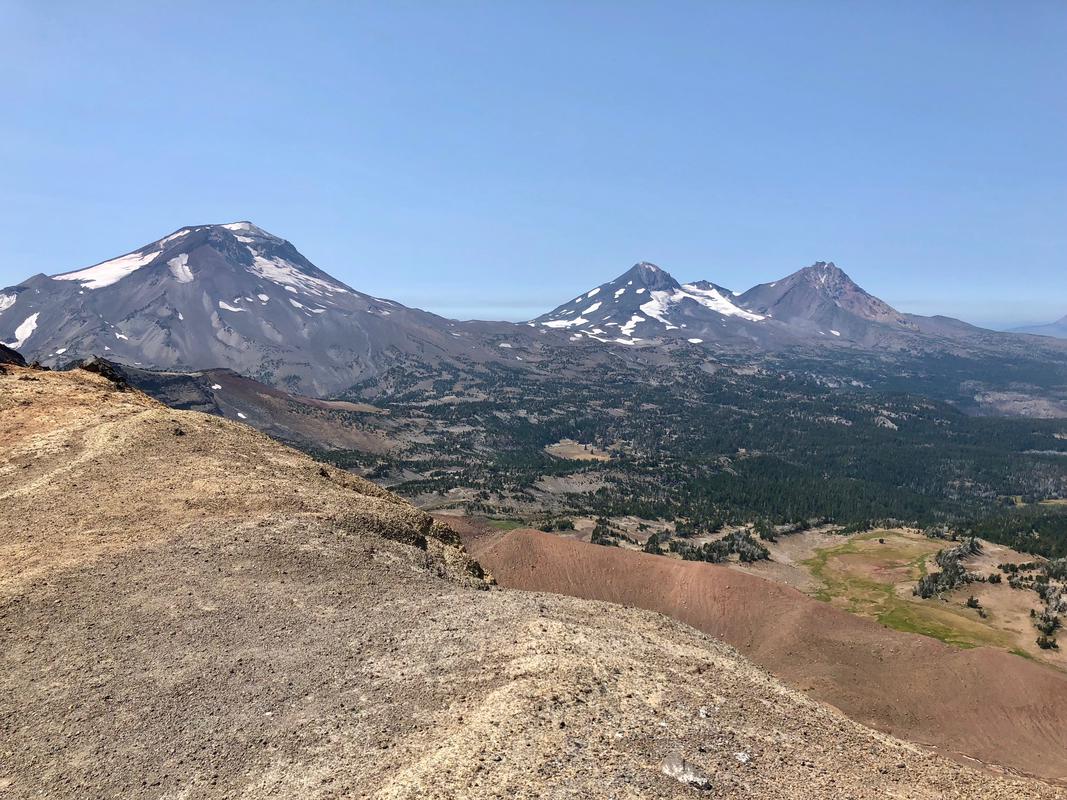 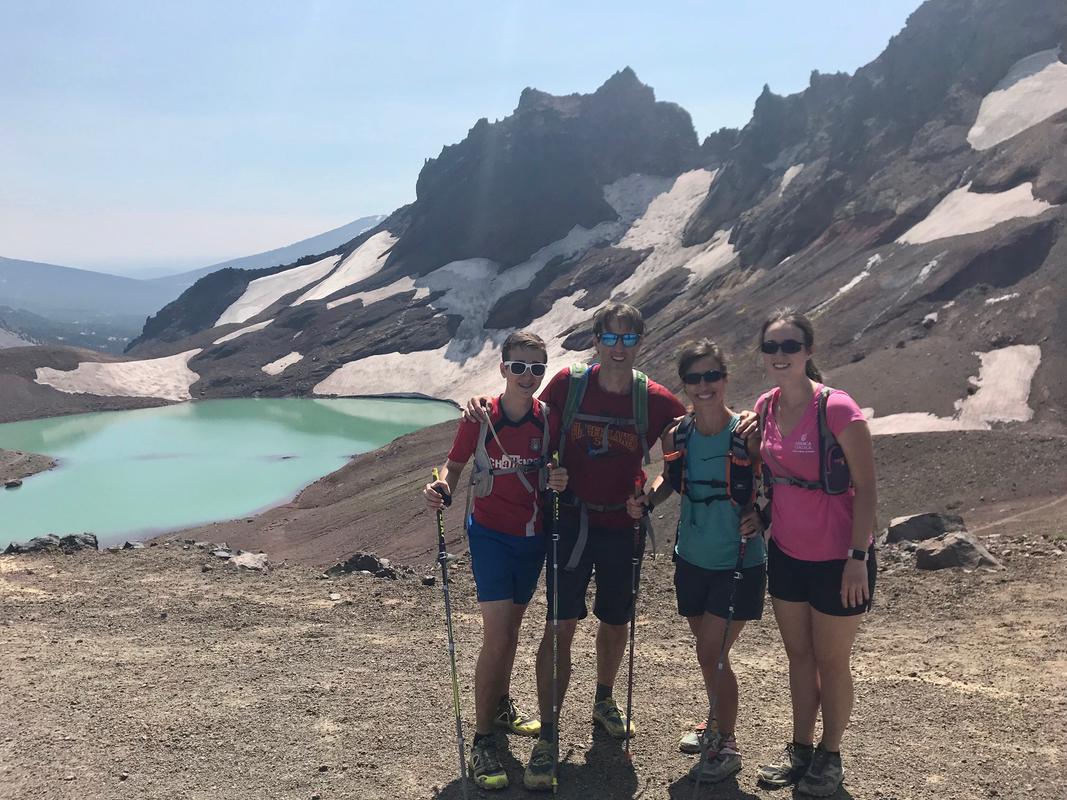 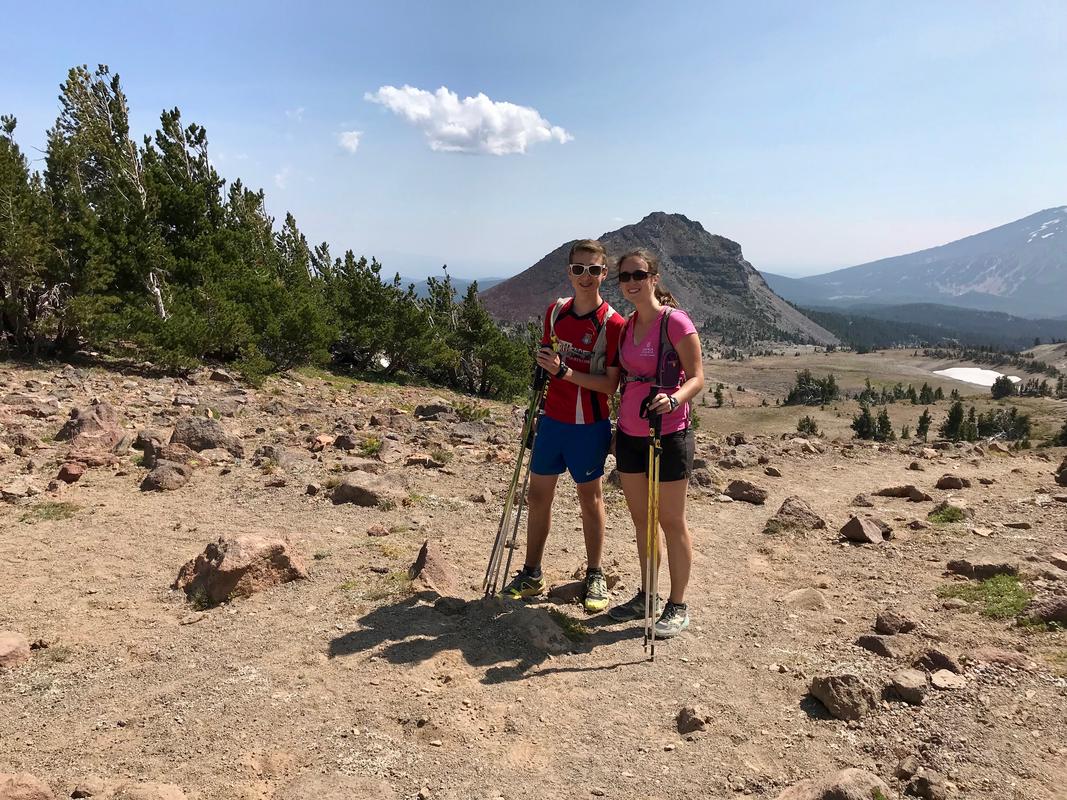 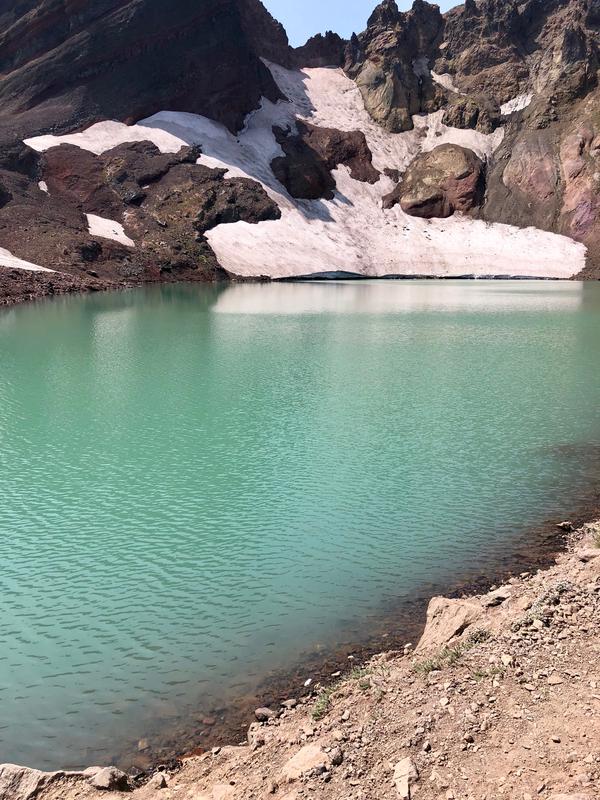 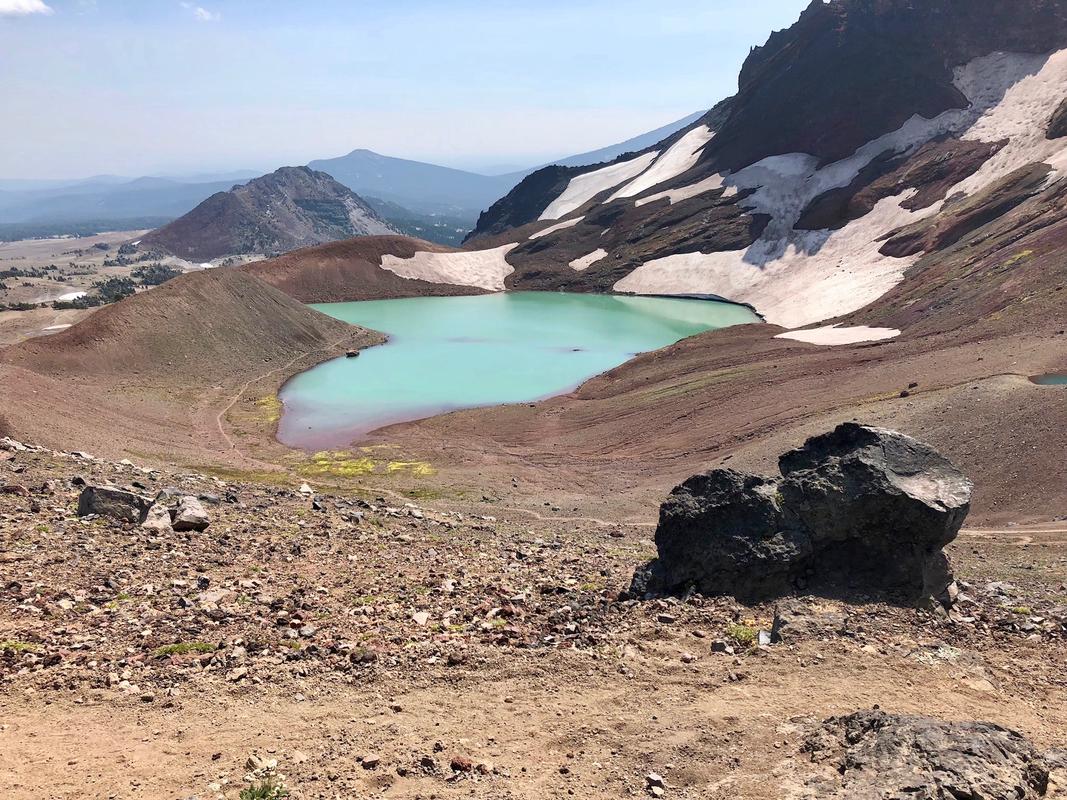 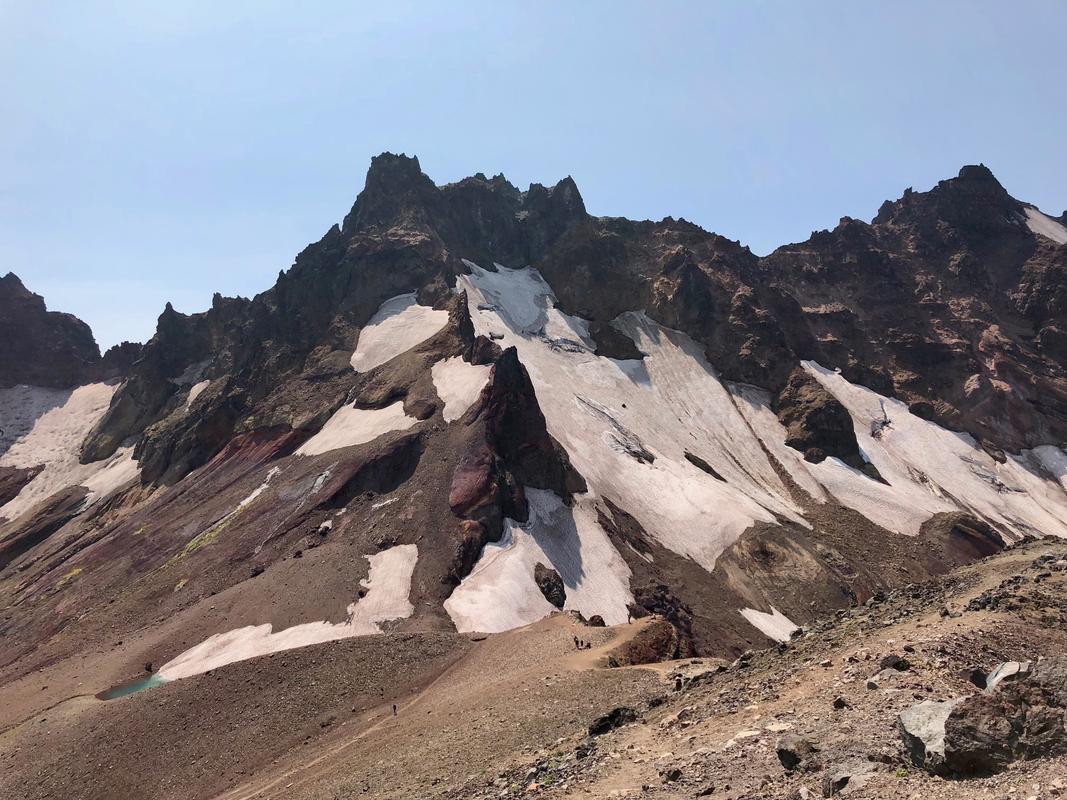 The return hike was mostly downhill and passed quickly. 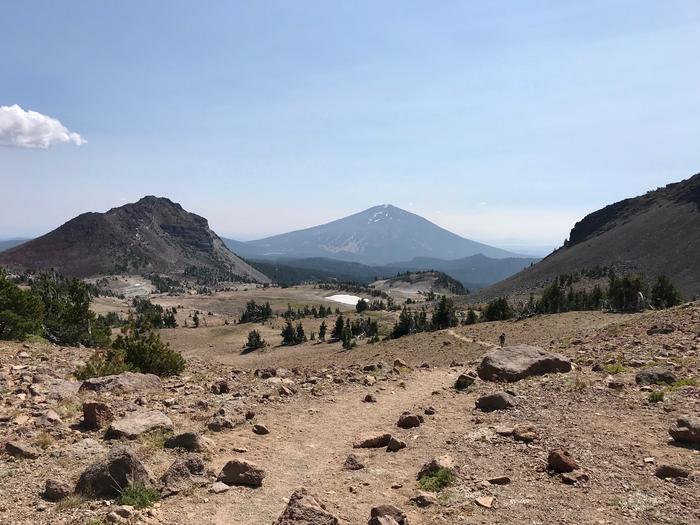 Mount Bachelor on the return trip

As we started our drive I had the same anxiety I’d had on the way up. It was amplified by a driver who’d beached the front end of his truck up onto a rock at the end of the parking lot. He needed a Good Samaritan with a tow rope, which I didn’t have. Luckily a driver that had just arrived at the trailhead seemed to have what he needed. My worries were yet again unfounded, though, as the descent was slow yet smooth. Soon we had all four tires on pavement, heading back to Bend and Sisters with another day of memories in our minds.