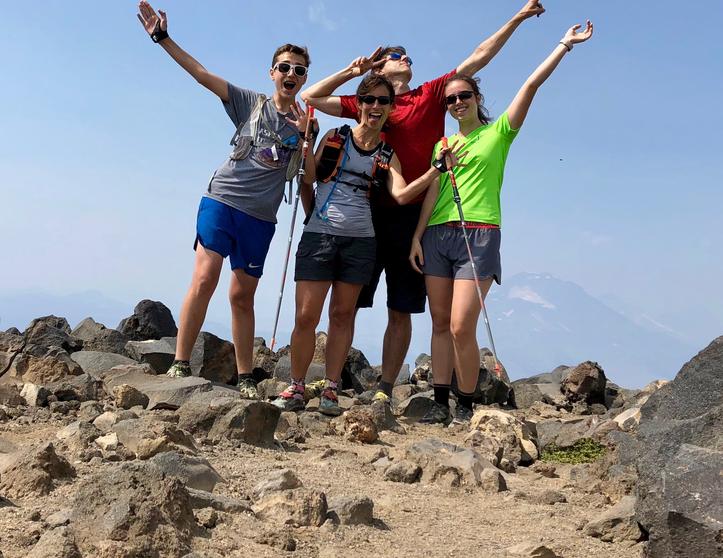 It may have been the wrong season to hit up a ski resort, but Mount Bachelor’s summit was too close for us to ignore during this hiking season. We arrived in their expansive, mostly empty parking lot shortly before 1 p.m. We opted to cut out some of the lower flanks of the butte by taking the scenic Pine Marten ski lift to the Pine Marten lodge, where we enjoyed a quick lunch of carrots, tortilla chips and hummus. 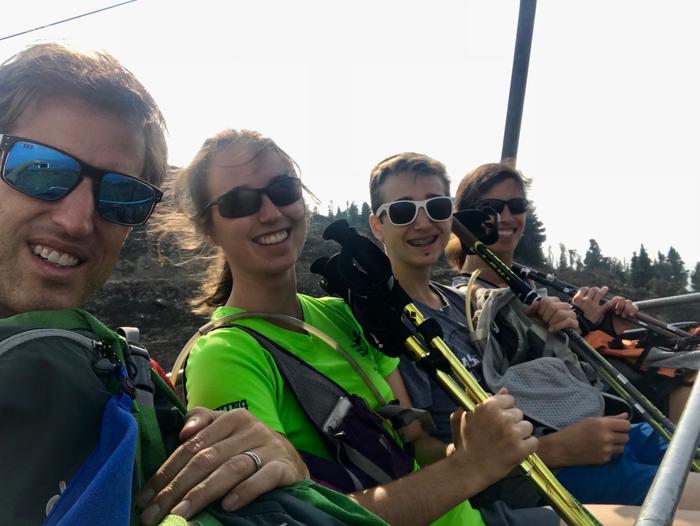 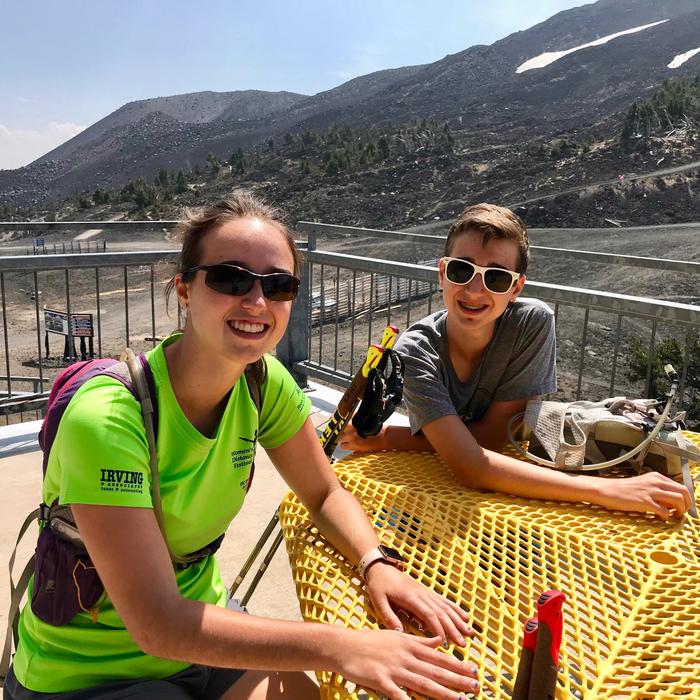 We were in the minority among the lift riders since the majority of which were mountain bikers. Bachelor appears to have some amazing mountain biking trails! We enjoyed watching a few bikers at the start of the course as we started our hike.

The hiking trail (at this point, a dirt road) descended 400 feet, heading southeast to the junction with the climber’s trail near the top of the Sunrise Express ski lift. I was glad that we asked for a hiking trail map when we purchased our lift tickets, as it made it very clear how to get to the climbing trail!

The trail's endless switchbacks guided us southwest towards the summit. We took a few short breaks for water along the way but focused mostly on making good progress toward the peak. The views were fantastic despite the area's wildfire haze. 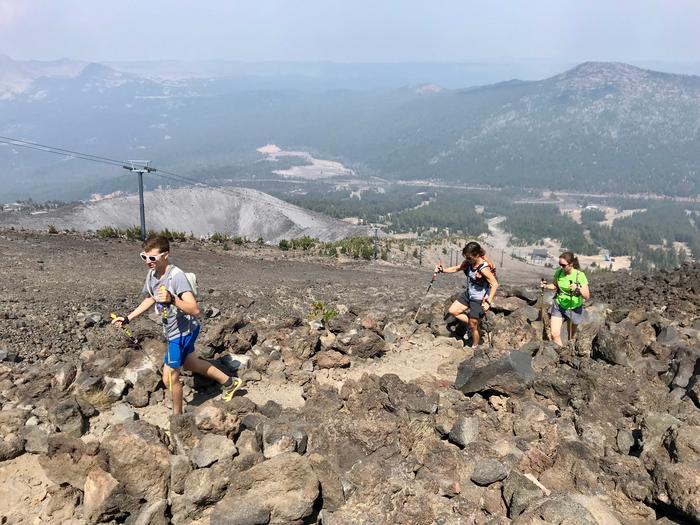 Switchbacks toward the summit

As we traversed under the Summit Express lift, the final path to the summit loomed in front of us. When we reached the same elevation as the Summit Express’ terminal, it was relatively unclear how to proceed. I found a faint path up a rocky slope and followed it, leaving the family behind momentarily. What I found at the top was a post, a solitary ski patrol sled and a very clear path that led to the true summit. I walked over there, not sure that the family would follow. On my return trip, I found a very clear path that they could take. I relished in surprising them from the opposite direction that I’d climbed and they then followed me back up to the true summit. 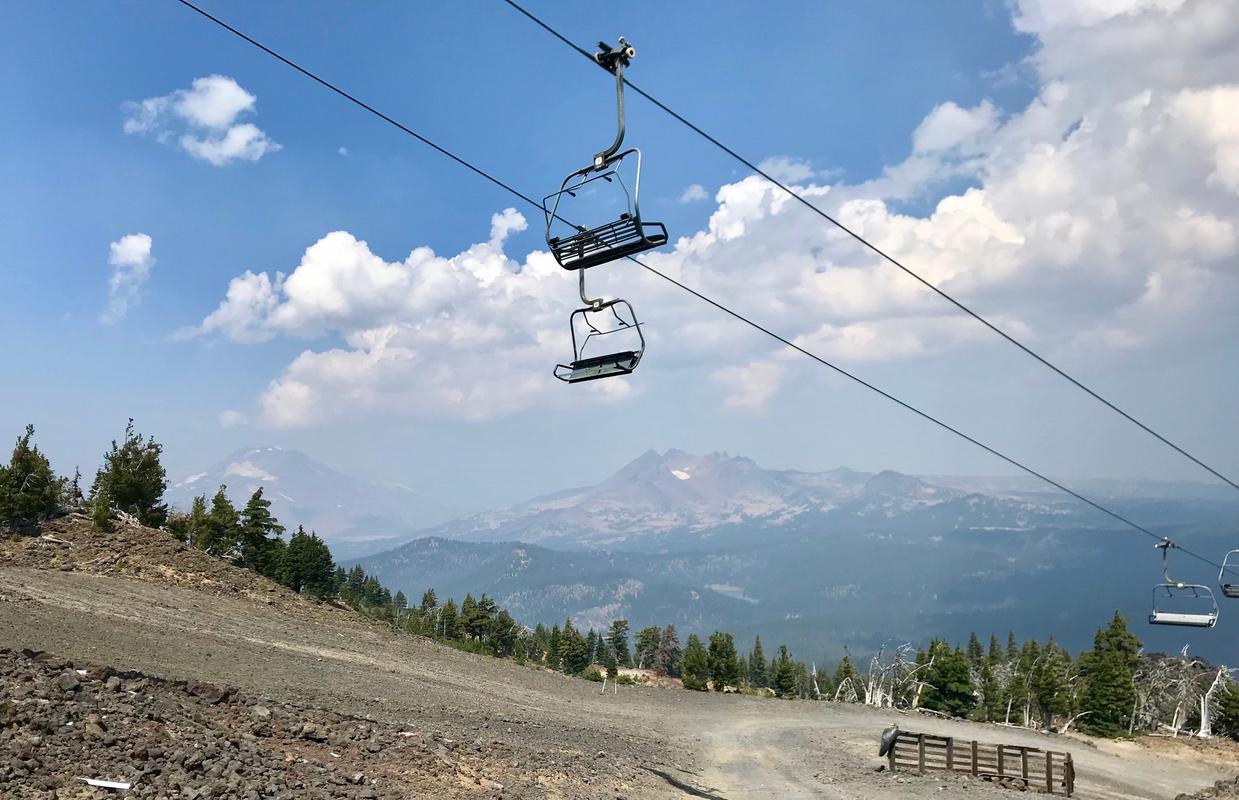 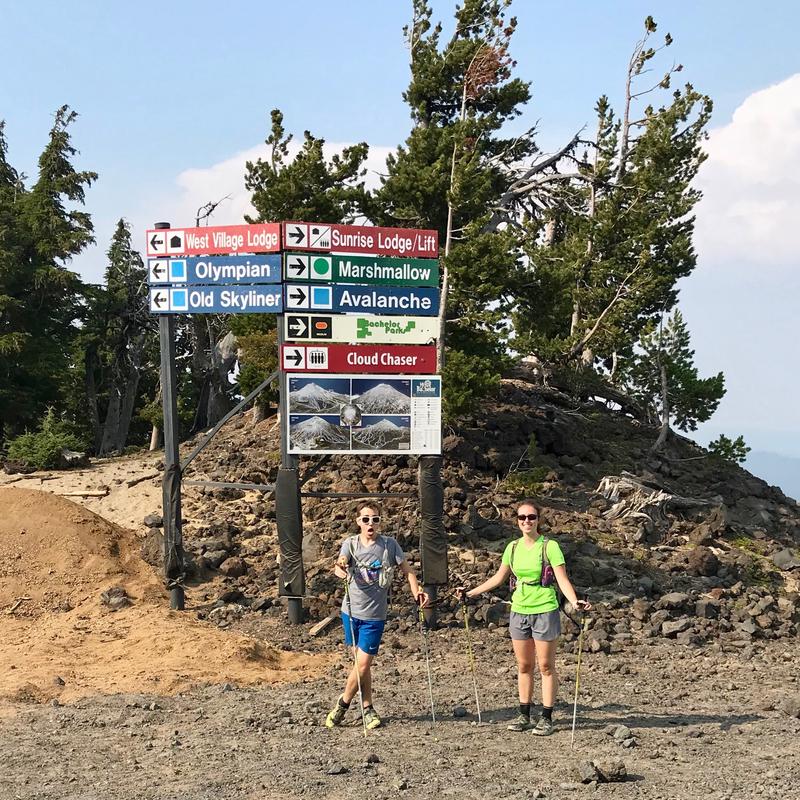 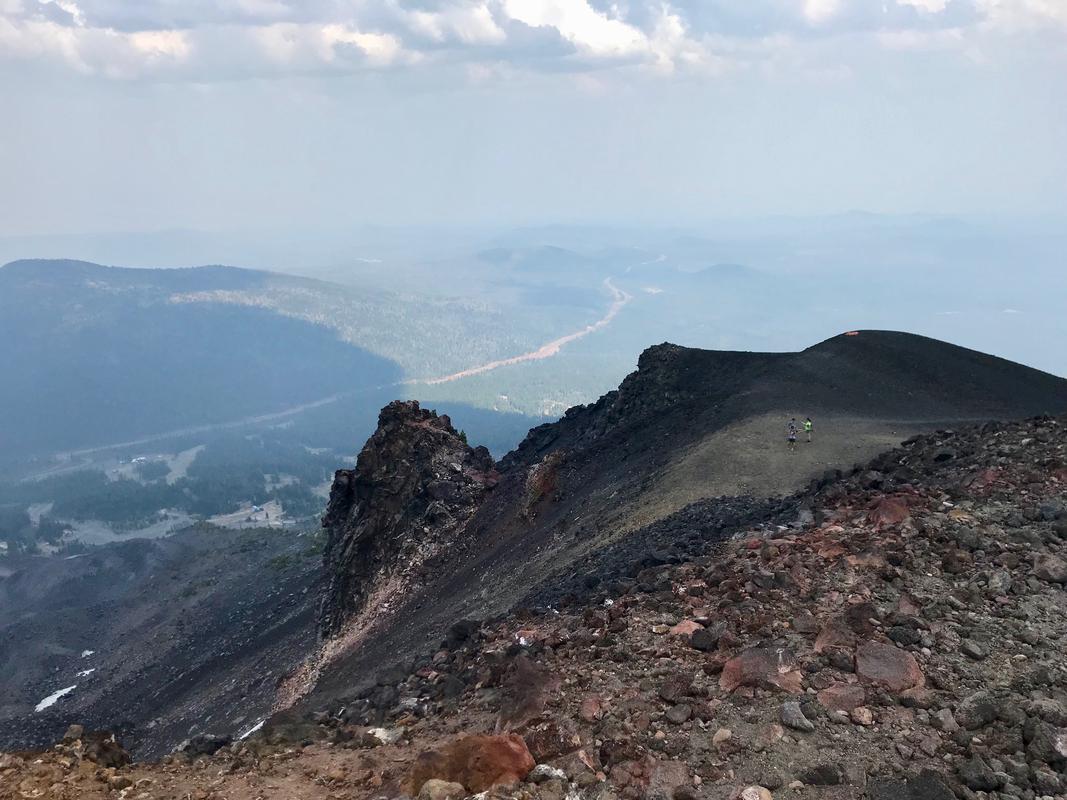 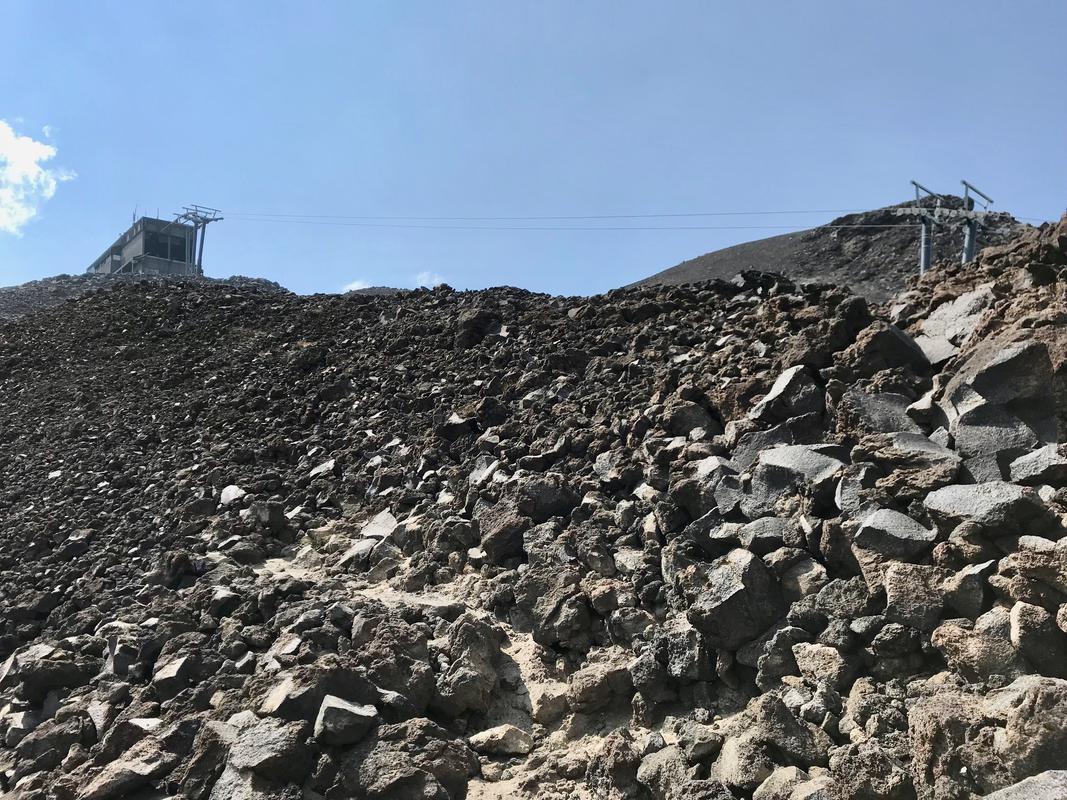 The timing was fortuitous. When I’d been up there, the skies were darkened by clouds. When all four of us ascended together, the clouds parted and we enjoyed full sun while we lingered at the summit. The views were amazing, and the feeling of being at the top of a 9,000+ foot peak was exhilarating. We took a few pictures and polished off a bag of M&Ms before heading back down the way we’d climbed up. 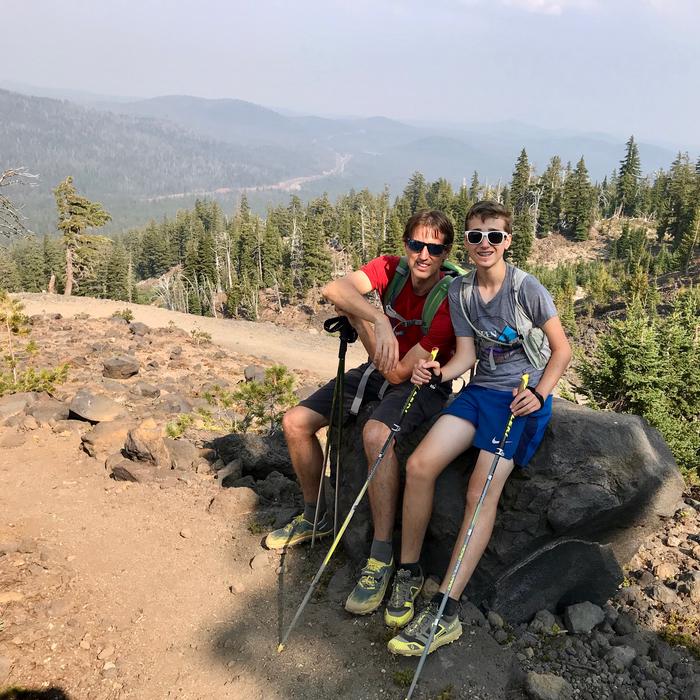 Xander and I taking a break during the descent 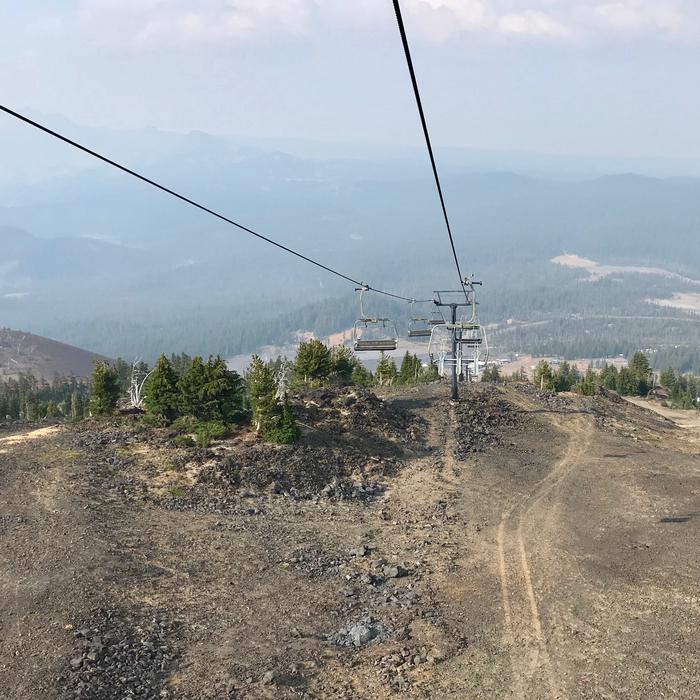 From the lift's descent

Once we’d taken the lift ride back down to our car, we headed back to Bend. The kids enjoyed some Cuppa Yo (frozen yogurt) while Amy and I headed to Bend’s Brewfest. 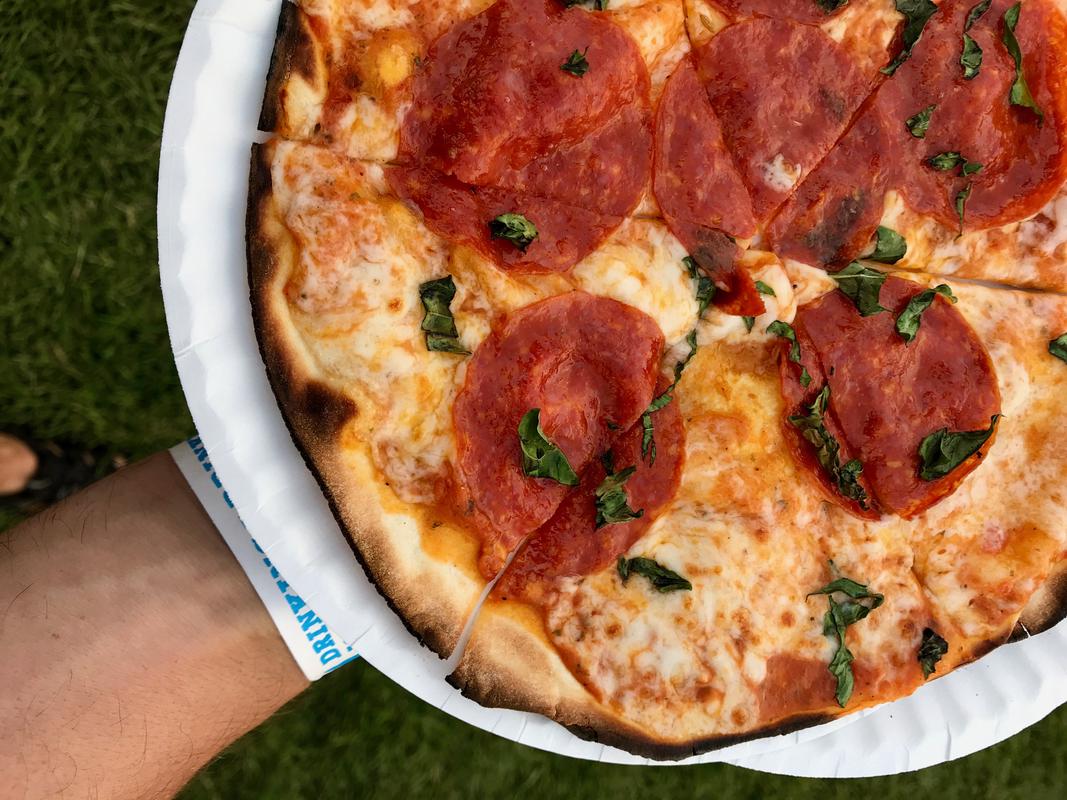 We had a fantastic time sampling beers from different breweries while the sun started to lower in the cloud-filled sky. We’d just missed a thunderstorm passing through the area, and it turned out to be a fantastic evening. We bought a tortilla pizza on the way out of the festival, saving a few of the slices for the kids before we headed back to our rental for the night.