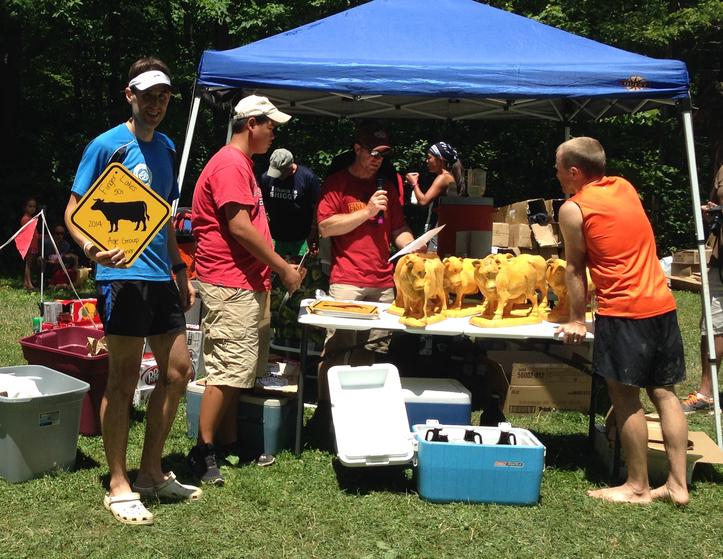 The night before this race, I tallied the miles I ran since signing up on January 1. I trained 918 miles over 6 months for THIS RACE. No pressure. I put a lot of pressure on myself, and in various venues, told people that I hoped to win (really, Scott?), or at least place in the top 10. In my head, though, my true baseline hopes were simple: finish strong and don't let the wheels fall off.

I trained 918 miles since Jan 1 for THIS RACE. I'll slip into this tomorrow for the Finger Lakes 50K! @FLRTC_Ithaca 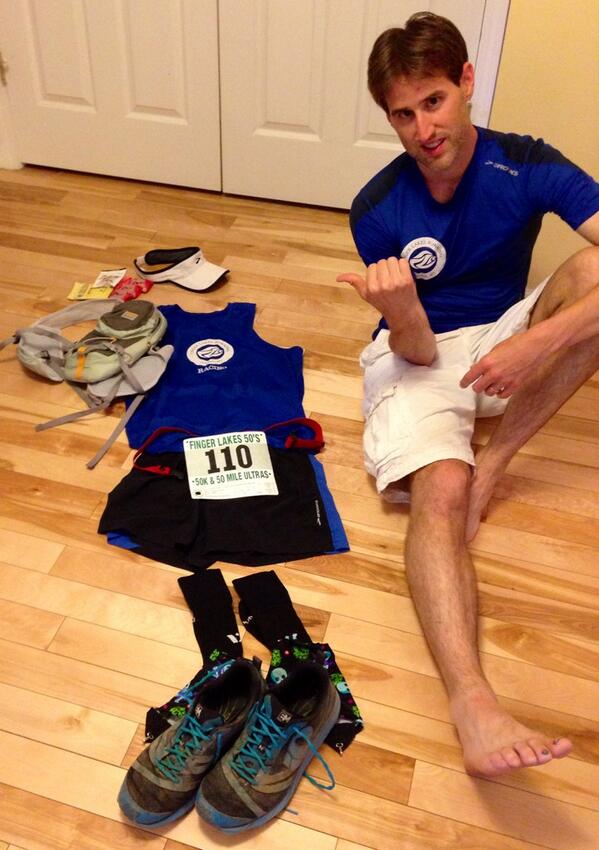 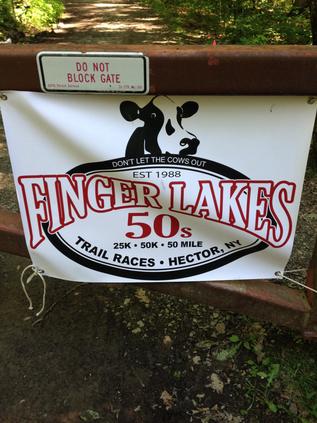 The afternoon before the race my plan called for a 30-minute shakeout run, so I did that amidst July 4 at my parent's pool.

We headed home and enjoyed a delicious pasta dinner after a trip to the National Forest to get packets and see where the aid station was where my wife and kids would volunteer.

I organized my gear for the following morning, and we hit the bed shortly before 10. I typically sleep horribly before a race, but for some reason I didn't sleep too badly before this one. We set alarms for 4:15 a.m., I had Kashi cereal, orange juice and coffee in me at 4:30, and Amy and I watched the prior evening's news before getting the kids up. Michael Boggs, who helped at the aid station (thank you!) arrived around 5:40, and we were off to the start.

Amy dropped me off at for check-in and continued on to her aid station. I had a nice time milling about, dropping off my post-race bag with a spare shirt and Croc sandals, and hit the bathroom one last time. I saw many familiar faces, including Wendy (who I haven't seen since college) who runs for Fleet Feet in Rochester. 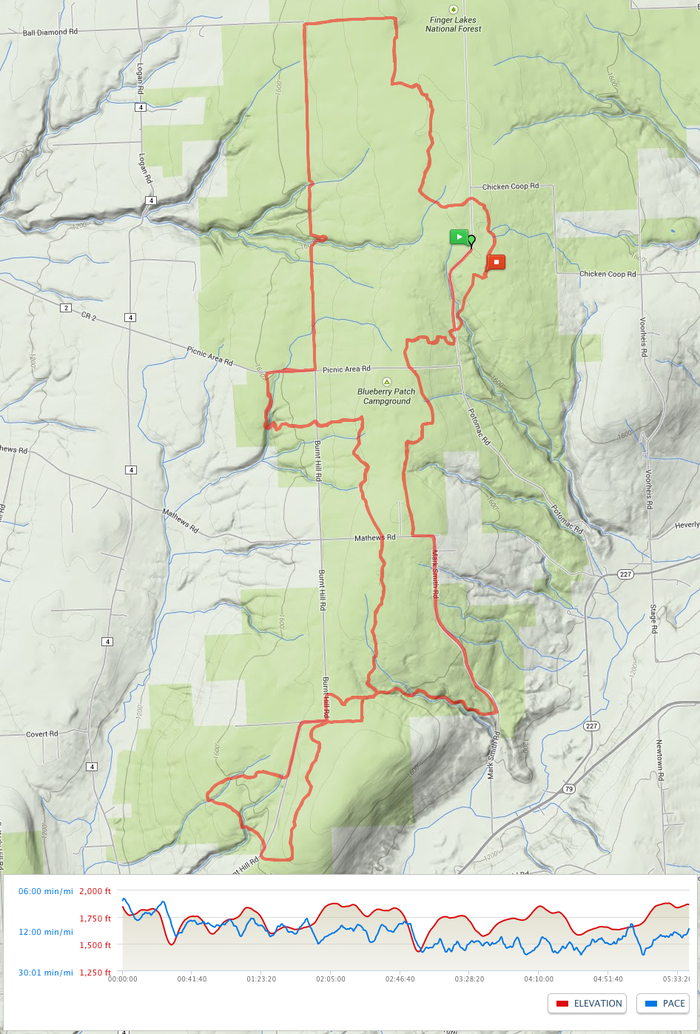 The race consists of 2 loops.

The race started after some final instructions, and we were off. Here was where I made my first mistake: the group was going (I thought) way too slow, and there was one lone wolf out front, Ian Golden from Finger Lakes Running & Triathlon Company. I caught him and we ended up running close to each other for the first few miles. I should have known something was not right when he was surprised at my pace. Definitely went out too fast.

The rest of the first loop is kind of a blur. I didn't do much hiking at all, enjoyed seeing my family at the aid station, didn't stop much at any other aid stations (I carried my own water and sugar) and chatted up a runner from Rochester. And I did that all in third place. Oh, the foolhardiness of going out too fast. I cover the first 16.5 miles in 2 hours, 18 minutes, an 8:21 pace. That's a road pace for me, not trail. Uh-oh.

And the mud? Bad. Especially near the top. Think about soaking your yard for a few weeks so it's nice and spongy. Then invite a herd of cattle to mill about for awhile, making nice 6-8 inch holes. Then fill those holes with water. There was nowhere to step without getting soaked, so get soaked, I did. My feet dried off pretty quickly, though.

I arrived at the mid-point having to go to the bathroom badly. They announced, "And in 3rd place, here comes Scott Dawson from Trumansburg, New York!". I made a gesture like I was going to make a 30-second pit stop, closed the bathroom door, and heard the announcer continue, "...and since I have a microphone, I can tell you that Scott Dawson is going to the bathroom! We should time him ...". EMBARRASSING. But still funny.

I ran out of the aid station still in 3rd place, but not for long. I was passed shortly after another mile was up, and loop 2 turned out to be NOTHING like the first.

Loop 2: Agony (but NOT defeat) 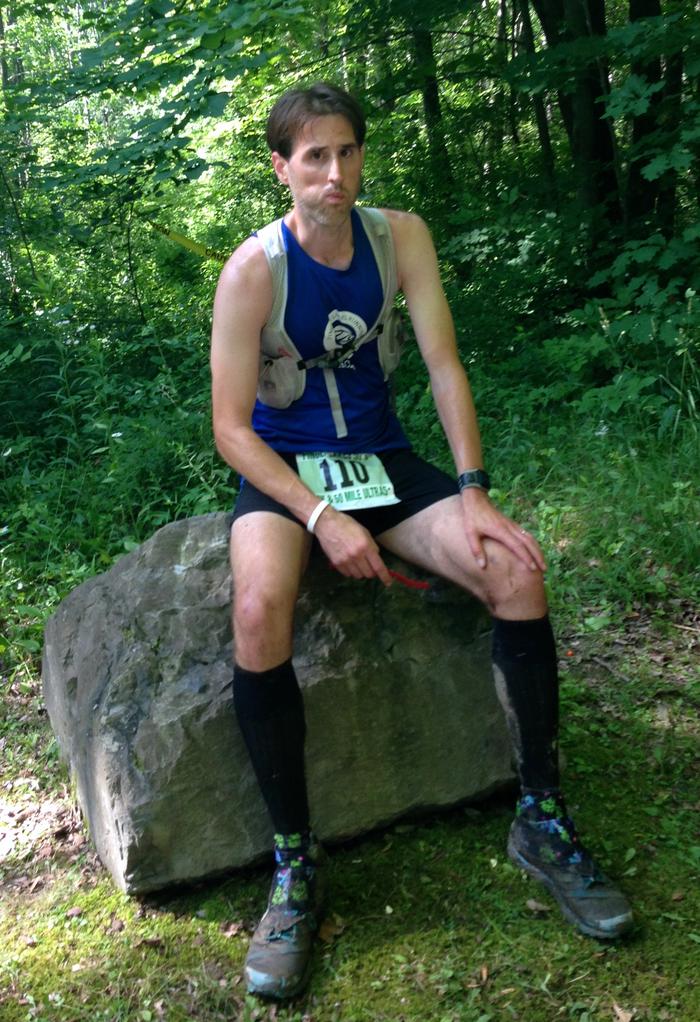 During loop 2, I stopped at EVERY aid station. For awhile. And I stopped on trail, too. My knees were my friends, helping support my upper body while I tried to catch my breath. At miles 20.5 and 23.5 I saw Amy and the kids. The first stop, they wisely got electrolyte pills in me (my calves were cramping badly), potato chips and a Twizzler. I sat down on a lovely-looking rock. Probably would have sat their longer had Amy not said, "You probably shouldn't sit TOO long." Sage advice. Legs, don't fail me now.

Another three miles and I had looped back to see them again. This time Amy ran down to see me, and I almost cried. They were tears of happiness: I was SO happy to see someone who I knew I could rely on, as I was having trouble. Any other aid station worker would have seen a stronger face, but when I see my family, I fall apart when I'm having a tough time. I got a banana, more electrolytes, a few M&Ms and headed out again.

I did a fair amount of walking and power hiking from here on out. And talked VERY negatively to myself: the randomness of a tired mind took hold.

"You don't belong here. All these other people? They're RUNNERS."

"Stick to making web sites. That's what you CAN do."

"Ooh, look! A pretty yellow butterfly! That would be SO cool to fly"

A horse whinnied in the distance.

"We should TOTALLY get a horse. That would be SO cool."

I live on a quarter acre. Reality check, please.

At the library aid station, one worker asked what he could get me. "I don't know. There's so much crap in my stomach, I don't know if it's coming up or going down." 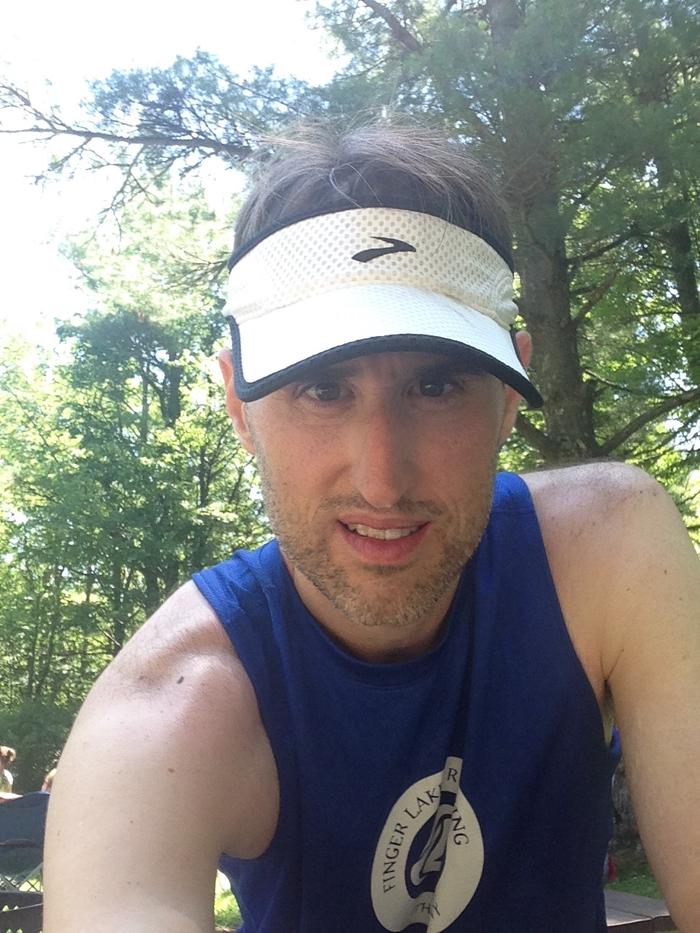 And then I kicked my own ass - hard - at mile 27. I told myself I trained for this. HARD. With commitment. I was going to finish this. I remembered two things I had learned at Animal Athletics hill training (it served me equally well on flats).

This little game held me well 'til the end. I picked up the pace once I headed South again toward the finish. The last three miles went quickly. I consider myself fortunate that my very favorite stretch of trail is at the end.

Y'all want to see some muddy shoes? And happy feet.

In the end, I'm so happy with the raw numbers. Despite the second loop's difficulty, and probably due to the insane pace of the first loop, I finished 12th overall, 1st in my age group (after the masters winner got stripped off 40-49 age bracket), with an overall time of 5:40:22, overall pace of 10:20 per mile and 2,828 feet of elevation gain over both loops. And I got a super cool sign for winning my age group. It'll be hung with pride next to my bibs on the wall at home. Yes, it's nice to be 40.

But oh, there are lessons. First, don't go out too fast! I CONSTANTLY struggle with this one. Second, don't get negative. I also struggle with this one, especially when I'm struggling. It's not helpful. Third, remember why you run. There was a point late in the race (around the bubbles and chips and such) where I said, "Screw it. I'm going to finish this, and I'm going to finish it strong." After all, I love to run. So I did. 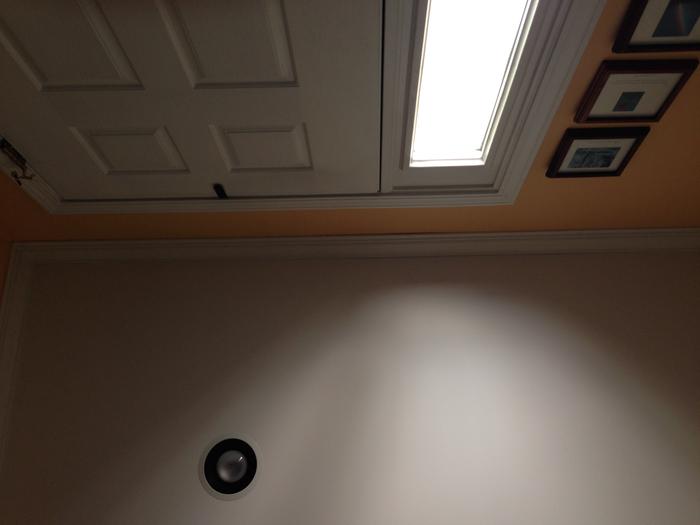 First thing I did at home? Laid on the foyer floor. 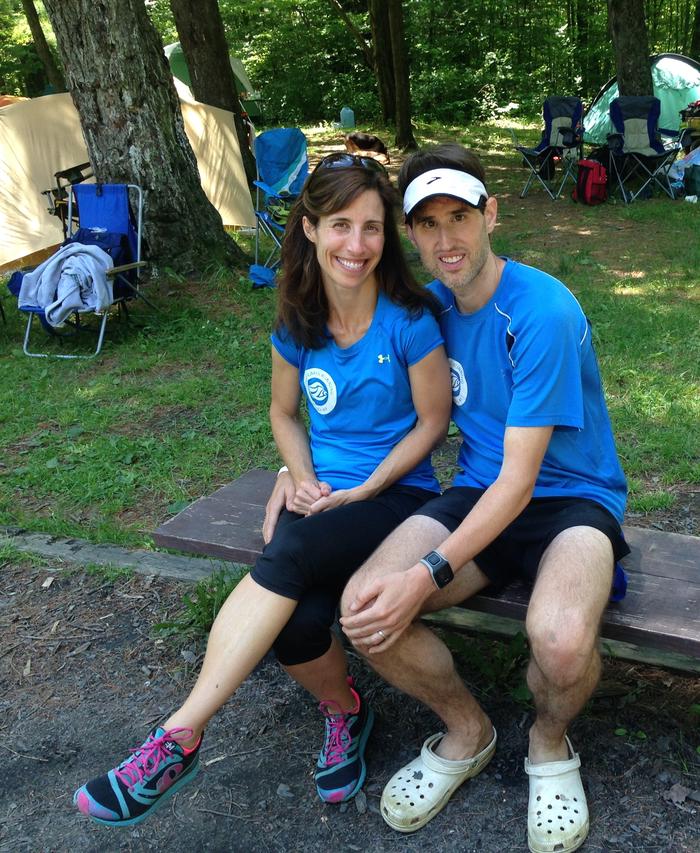 Amy and me, post-race.

I am SO grateful for everyone who helped me on this journey. My wife Amy gets the first shout-out: she's been SO supportive of my training since the beginning of the year, and she's totally going to rock her first 50K in just a month's time at GLER. Second, my kids have put up with their Dad preparing to run, running, talking about running, having them run ... and I see my love of running rubbing off on them (they're out running right now, incidentally). Third, to Finger Lakes Running and Triathlon Company. I've enjoyed being a part of the ambassador community for the store, and having the social support and gear that comes along with that. And last, but certainly not least, to the myriad people who worked so hard to organize and run this wonderful event. Syracuse's Wilderness Search and Rescue team was out in force, making sure we were all safe. The race organizers made sure the course was well marked, stocked with aid, and ran an efficient and enjoyable event. The volunteers were remarkable, from registration to aid stations and everywhere in between. My wife and kids worked at South Beach aid station, and I had the distinct pleasure of being able to see them four times during my journey. Here's a little set of pictures from the fun that they had supporting the race. Thank you! 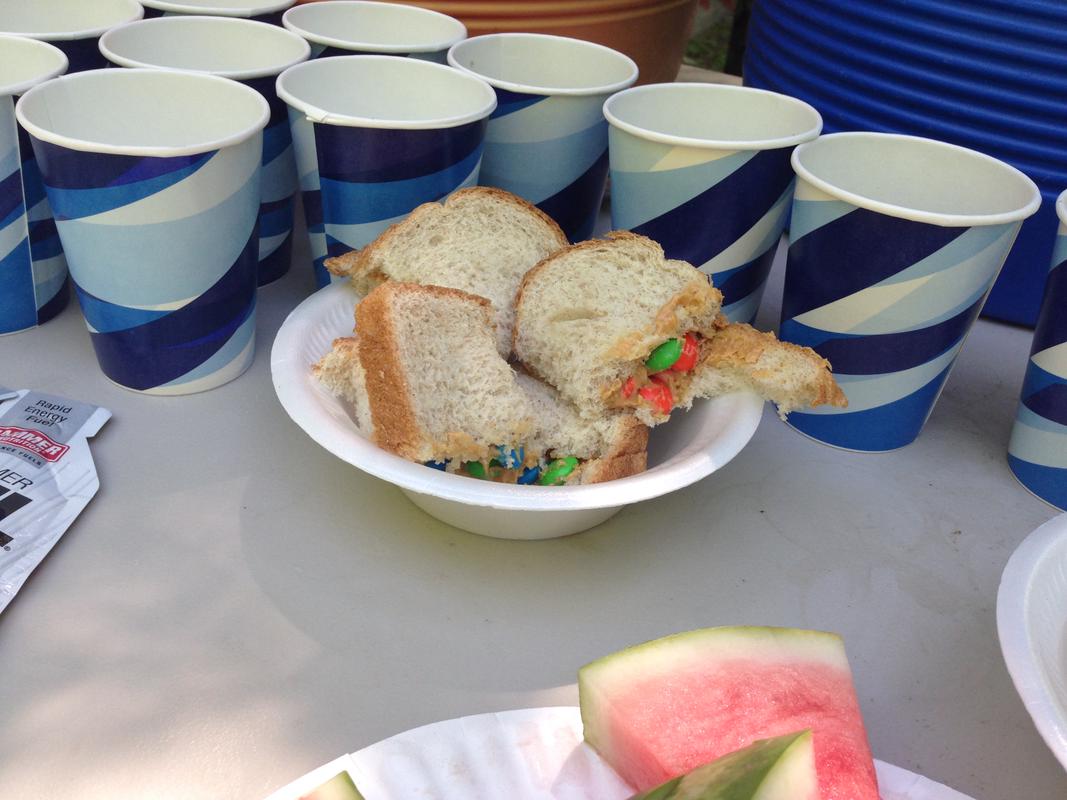 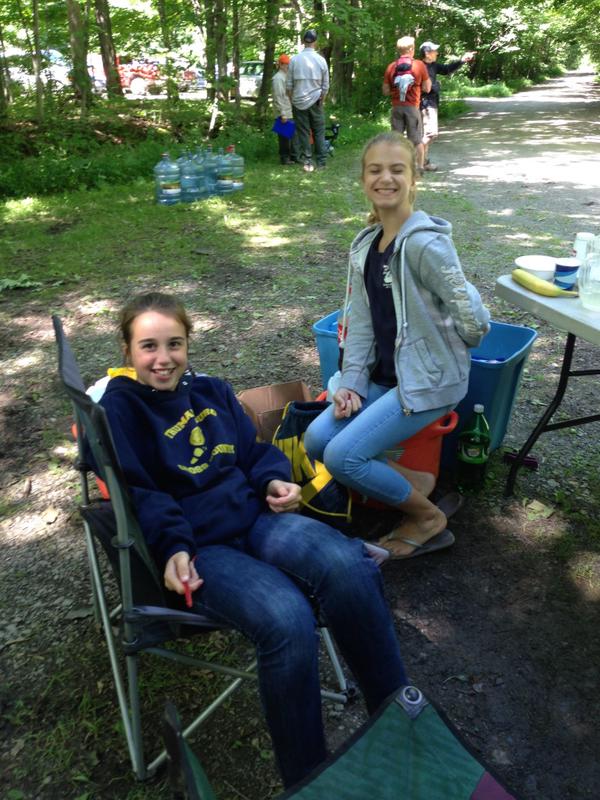 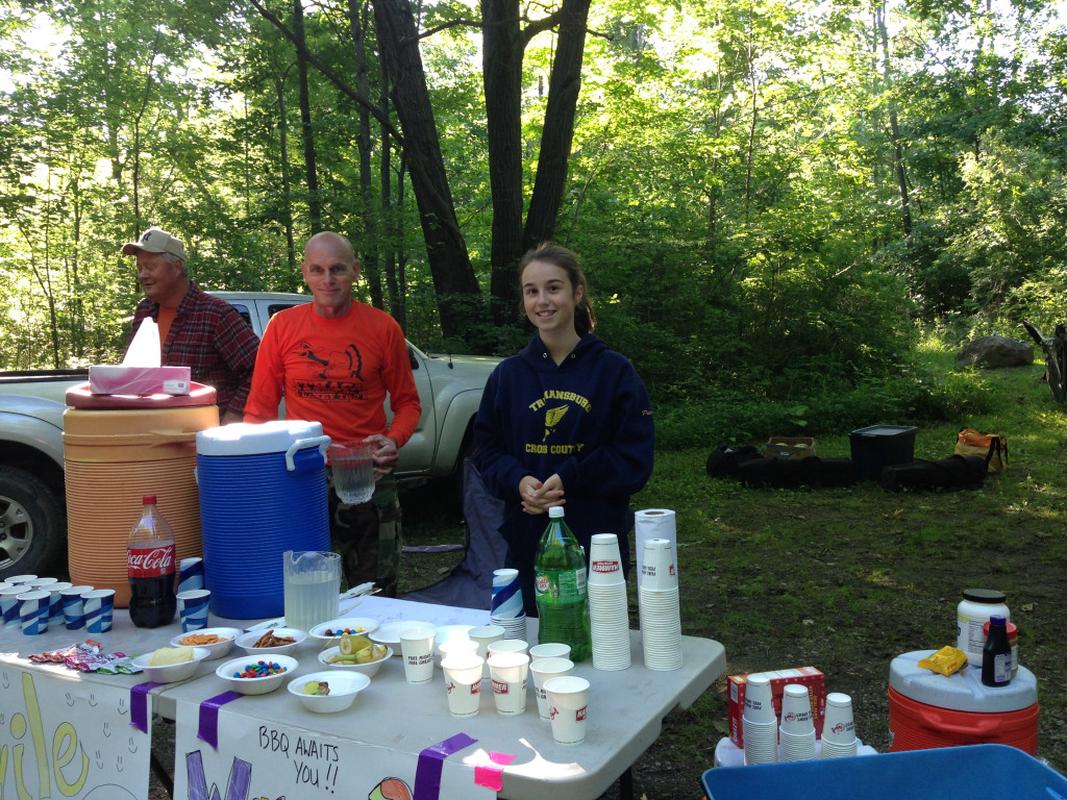 There are 115 other posts like this one. Here are some other recent ones: