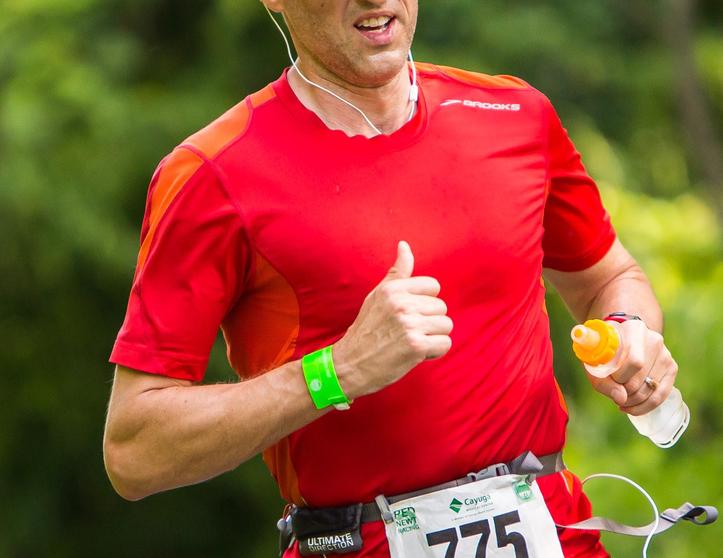 The 2017 Gorges Half Marathon in Ithaca loomed large on the calendar, just 2 weeks after my finish at Cayuga Trails 50. Two years ago I did this race just weeks after my first 50-miler and it went well, so I was hoping for the same! After having run 30-70 miles a week for the prior 24 weeks, I took these interim weeks really easy, focusing on listening to my body and making sure I didn’t overdo it. The first recovery week was 16 miles of easy running, a bike ride and a hike. The second recovery week was 13 miles of running with a day of tough track intervals thrown in. I took the day before the half marathon totally off from running. Amy and I enjoyed a carb-loading lunch at Viva Taqueria after we picked up our race packets at Finger Lakes Running and Triathlon. 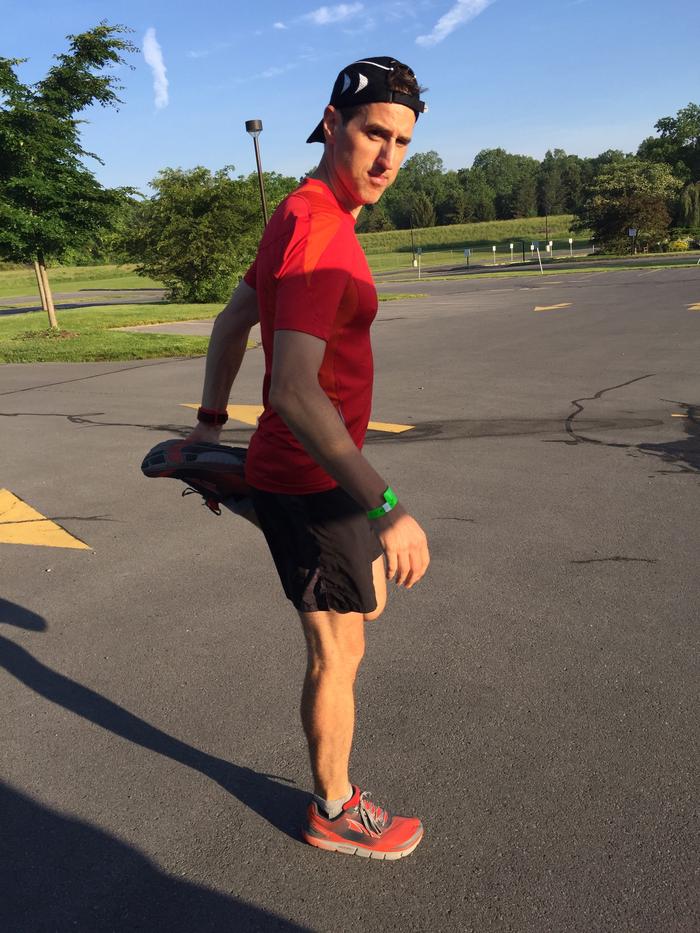 The four of us - Amy, Elizabeth, Xander and me - were all running in this race and we all had different goals. Amy was pacing her friend Christina, and Elizabeth and Xander wanted to finish strong. I wanted to be competitive with my half marathons from last year, coming in around the 90-minute mark. This was a point-to-point race, so we stashed a car in Ithaca Friday night for the return trip and drove our other car to the start. Over 600 people were racing this year! We arrived at the start area on a stretch of country road with way too few porta-potties. Luckily a homeowner nearby took no offense when we used his hedgerow as an impromptu bathroom. One guy waited patiently behind me as I watered a tree. I told him it was a great spot: no ticks!

The first mile of the course was on level road, followed by five miles of downhill packed cinder bliss on the relatively new Black Diamond Trail. Soon we were on our way after Ian blew his traditional ram’s horn to start us off. I opened up my stride and focused on speed, knowing I’d want to take advantage of the downhill course profile as long as I could.

I had a wardrobe problem about a half mile in. I had opted to attach my race number to my Ultimate Direction waist belt, in which I was carrying a phone and our car keys. The belt was too loose, so I reached down to pull the strap to tighten it. The strap is awkwardly positioned beneath the bib when it’s attached, so when I pulled it, my bib came unattached on one side! It was flapping in the breeze at my side, reduced to a single point of failure. I was carrying a collapsible Nathan flask filled with Tailwind and tried in vain to re-attach the bib as I ran. It was not working.

As we turned onto the Black Diamond Trail, I stopped to address the situation. I probably lost 20 seconds in doing so, but now my belt was tight enough and the race number secure. I leapt to a run again, trying to make up the ground between me and a few runners that passed me by during my stop.

I made a decision throughout the race to NOT look at anything other than elapsed distance on my watch. I was not concerning myself with pace, opting to run by feel instead. The shaded canopy over the Black Diamond provided a nice respite from the sun, yet the humidity came through just fine. It was going to be a hot one. Looking back on my run, these first miles flew by at a blistering pace for me: 5:50, 6:08, 6:20, 6:35, 6:25, 6:35 and 6:34.

I focused on the runner in front of me during the last two miles of the trail segment. He was less than 50-75 feet ahead and I tried to keep that interval between us. I passed Ron Heerkens Jr taking photos, and this was where he captured the wonderful picture at the top of this post. As I emerged from the trail into the bright sunlight drenching Cass Park, I saw my friend Jon Shaff with a crowd of spectators. I veered to my right and reached out my hand to him. “Power me up, Jon!” We high-fived and I was on my way, feeling the boost from human contact.

Now that we were on level ground without shade, it took more effort to sustain the pace I’d been enjoying. I backed it off, now running just over a 7-minute mile. As we approached the aid station just before Cass Park, I saw that I was gaining on the man in front of me. I didn’t need to stop since I was carrying and still had liquid, but he was stopping! An aid station worker stepped across the narrow path to help him out, and I yelled (as nicely as I could) “Coming through, coming through!” She quickly dodged out of the way and I continued onward. I got passed by a few people on the stretch by the inlet and kept trading places with the man that had been in front of me.

As we crossed the inlet bridge to get on the waterfront trail, I heard a man on the corner shouting out numbers. As I passed, he yelled, “thirteen!” I was in 13th place? Lucky 13. I liked that, and resolved to not let go of it. My bottle was mostly empty now. The next aid station was my chance to refill, but I didn’t have long. I unscrewed the cap, yelling “Tailwind? Tailwind?” as I entered the aid station. The race advertised the very product I’d been using for ultramarathon training, so I was psyched. However, nobody answered me. I ran up to a young kid near the end, and asked hopefully, “Tailwind?”

“I’ll take it.” He filled my bottle quickly. I screwed the cap on as I started sprinting out of the aid station. I wondered how the sweet drink would taste since I was unaccustomed to it in training. As expected, it tasted nasty so I sipped small bits as I proceeded past the Ithaca Farmer’s Market. A small group of spectators stood at the small bridge that marked the turn towards Stewart Park, so my humorous self asked them enthusiastically, “Is this it? This is the end?” Ha. More miles to go, sir.

I weaved through several turns as I approached the bouncy bridges marking the entrance to Stewart Park, passing a pair of hasher spectators foretold by “BN” (beer near) chalked on the sidewalk. They had a cooler with them, clearly prepared to pour some hoppy refreshment for their hash-running brethren. After dodging the ever-present goose poop on Stewart’s blacktop paths, I saw Joe Reynolds marking the exit from the park. I was so distracted by saying hello to him that I missed a subsequent turn, losing a few seconds as a runner behind me yelled, “This way!” I sprinted a diagonal back to the proper path and ran through the next aid station. I returned the favor to the person who helped me get back on course, as he started to take a wrong turn after we exited the aid station. 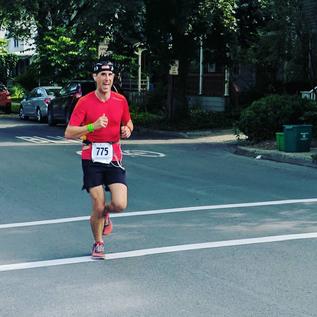 We were getting close now. Just a few ups and downs as I passed Ithaca’s High School, and then I was on the home stretch. A dozen or so city blocks were all that stood between me and a chance to catch my breath after finishing. I stole a glance behind me. The closest runner, the man I’d been jockeying with for position, was at least 50 yards back. I knew if I kept my current pace there’d be no way I’d lose 13th place. I passed Jeff Holbrook, wearing his characteristic smile and positive attitude as he directed traffic. He took a picture of me as I passed. I passed the infamous Shane Eversfield who gave me a Shaka sign as I went by. Mahalo, man.

I crossed the finish line, gratefully accepted a bottle full of cold water and dumped half of it on my head. It felt so refreshing! I hung around the finish for a few minutes and enjoyed talking with friends: Ellie Pell, Pete and Hayley Kresock, and Allison Usavage, who was taking some finish line pictures.

Mostly recovered, I used my Find My iPhone (a.k.a “stalk my spouse and kids”) app to see where the rest of my family was. Amy was not carrying her phone today, but I could see that the kids were near Stewart Park. Elizabeth was behind Xander. I started to walk back along the course, committing to running back with whoever was behind. I enjoyed shouting encouragement to runners and seeing some familiar faces. I made it just over ¾ of a mile back when BOTH kids came into sight, running together! I asked if they knew where Mom was, and they said that she was still behind them with Christina. Elizabeth had caught up with Xander somewhere in Stewart Park and encouraged him to start running again. It filled my heart that they were together, and I asked if it would be okay if I ran in with them. They were totally cool with that, so we ran the remaining distance to the finish together. Amy and Christina finished shortly after, and we were all together again! 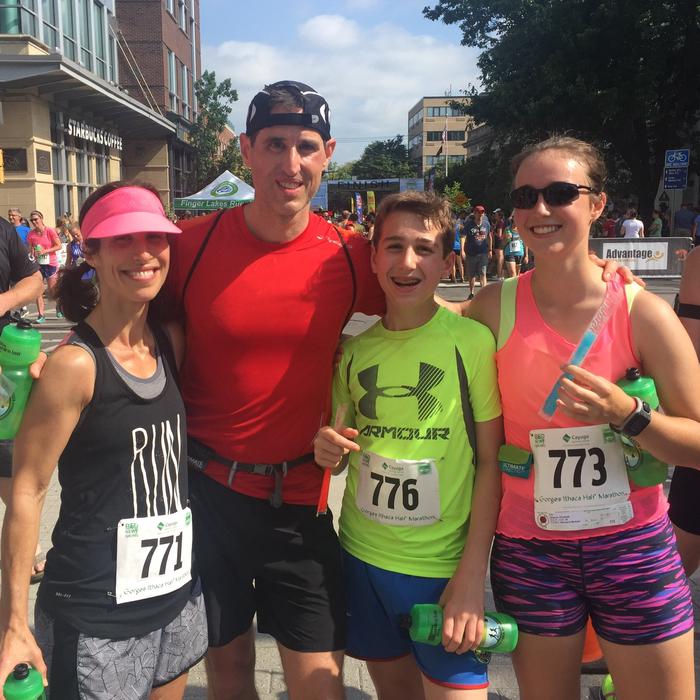 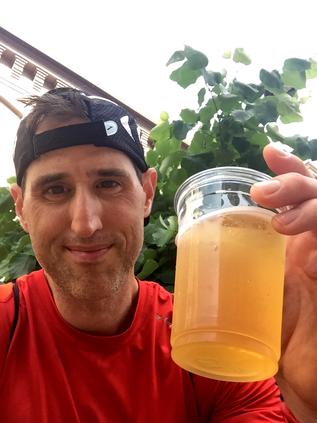 One really cool thing about this race is the after party. We made our way across the street to the Ithaca Commons and grabbed a group picture. I helped myself to more water, some yogurt and delicious homemade energy squares. Further along, a full brunch was available along with Ithaca Beer. I loaded my plate with pulled pork, salt potatoes, eggs and fruit, and grabbed a Cayuga Cruiser from the Ithaca Beer tent. We all sat together and enjoyed the post-race brunch, telling tales from the trails and roads we’d just traversed. The celebration was not long-lived, since we had to get Xander back up the hill for a birthday party he was invited to. As we walked back to where we’d stashed the car, I got a text from my friend Jenny that I’d won something! She was nice enough to grab the envelope for me. I’d won the prize for 1st Masters.

It was only after looking at the results at home that I realized just how close this race had been for me. The man I kept trading places with? He finished 20 seconds behind me. He’s 41 years old. Twenty seconds was all that separated me from 1st Masters and 1st in my age group. Practically speaking, my aid station strategy of only stopping when I needed a refill made all the difference in my placement. I’m so happy with how I did in this race, especially after having done a 50-miler two weeks prior. It’s the second-fastest I’ve ever run a half marathon, besting all of my half marathon races from last year and just 1:41 slower than my personal best from Corning’s Wineglass Half Marathon in 2014.