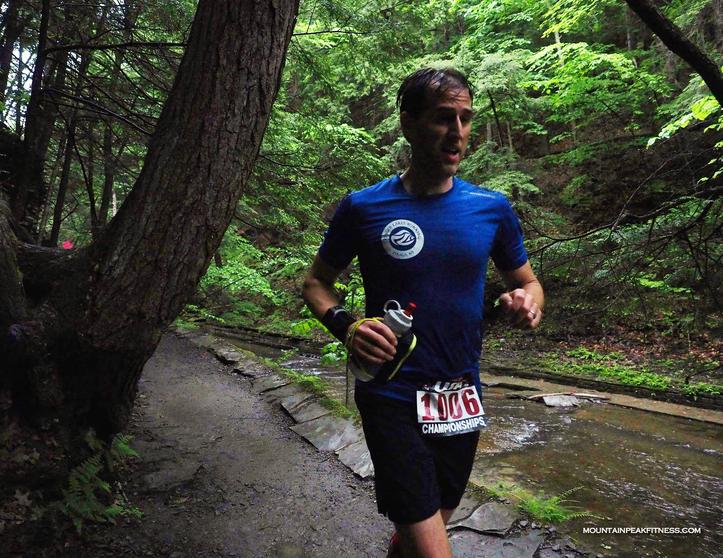 This particular journey, my first 50-miler, started 20 weeks ago with a single step. With snow starting to melt, my training was about to shift to trails with 75 days left. Then, with 30 days left, the unthinkable: I fractured my right 5th toe, on my couch no less! I have been injured before and pushed it, so I heeded the medical advice (thank you, Dr. Getzin!) and got my toe in working order, just in time for this race. I really missed trail running during the last 4 weeks of my plan, but did some working out in the form of a 5K with my son and some tough endurance elliptical workouts. So here I found myself, Sunday, May 31, 6 a.m., toeing the line at the Cayuga Trails 50, the USATF 2015 50 Mile Trail Championship.

Getting Ready for Cayuga Trails 50

Friday before the race, Amy and I went to Ithaca Beer for a gathering of racers and volunteers. It was so fun! We got to sample a special brew, Lucifer's Steps, made just for the race. We spent a pleasant while talking with a trio of runners from New Jersey. Delicious food, beer, an incomparable natural setting and the chance to meet new people made it a wonderful evening.

Saturday I picked up my number, tracking chip and a new Ultimate Direction 20 oz. handheld at Finger Lakes Running & Triathlon Company. I enjoyed a carb-loading dinner at Viva Taqueria (our favorite!) before heading home to make final preparations for Sunday's race.

I decided that I would run with a handheld instead of a hydration pack, given the short distances between aid stations. I've found that the pack weighs heavily on my shoulders, and later miles can be uncomfortable. I was thinking about also using a light pack to carry dry socks, but instead opted for a drop bag that I could access at 4 points during the race, at Underpass. My drop bag had a change of clothes, socks and spare Fig Newtons.

Race morning I awoke at 4 a.m., had a bagel with peanut butter, coffee and orange juice. I loved reading all of the supportive comments on Facebook, and had a surprising text from my Dad just then, who wanted to wish me the best while I was eating "my Wheaties." Very cool. Now, back to bed, Dad! 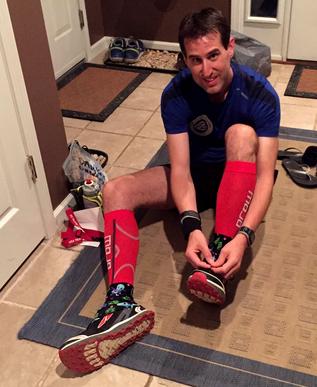 Amy drove me to the start, arriving at about 5:30, where I checked in and found a far-off bathhouse with no line. The weather was cool (50s) with a chance of rain, which I thought would be pretty good for the day! I glanced at the sign that would welcome me back to the start at mile 25 before heading out for another loop. It would prove to be a deciding factor later in the race.

I have not run this entire loop before. I ran the Treman segment at Lucifer's Crossing, and the Buttermilk segment at the Tortoise and the Hare, but not the connector of Lick Brook. We had hiked Lick Brook as a family, and to say it's steep is an understatement. My first loop average pace was ~12:30, completing 25 miles in just over 5 hours. 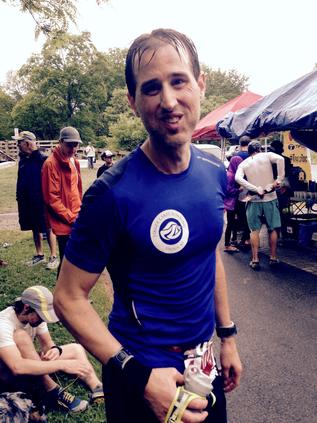 I enjoyed running with a lot of different people this loop, and the pace was good and conversational. I had a BIG smile coming into the Buttermilk aid station at mile 12.5, where Ray and Diana were waiting with their own smiles. I said hello to them, got myself some food and headed back out for the return to the start. Along the way I knew I'd hit the Old Mill at mile 22, where Amy, Elizabeth and Xander were volunteering for the day. About a mile out from there, I saw Ian Golden who asked me how it was going. I told him it was tough! He nodded thoughtfully, remarking "It ebbs and flows ..." Later in the race, I'd think to myself there was more ebbin' than flowin', but no matter!

Soon the Old Mill was in view, and there were my kids! It was so good to see them, and they ran me in to the aid station where Amy and the other volunteers helped me out. My parents Ed and Jean were there, too, taking some great pictures and giving me encouragement. 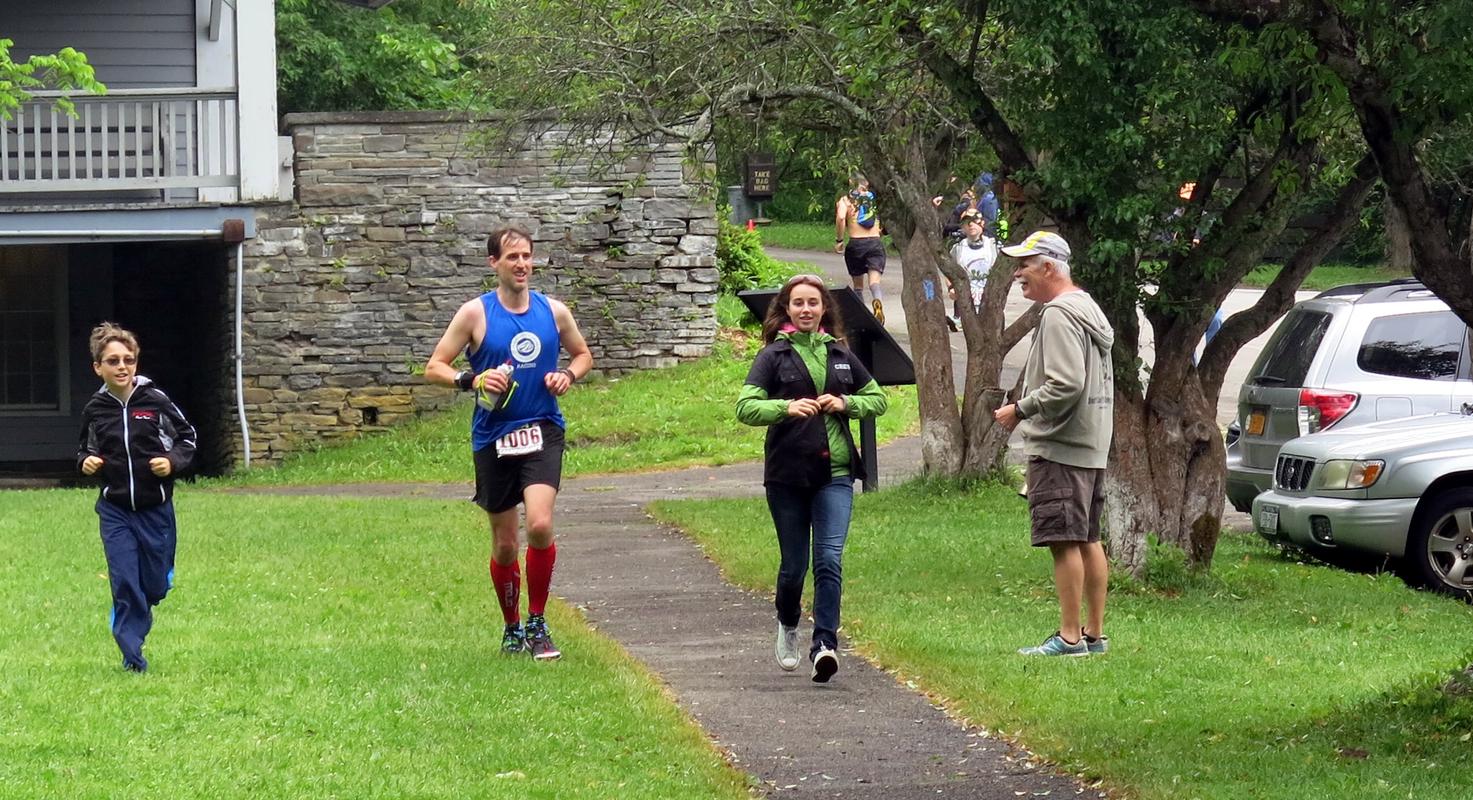 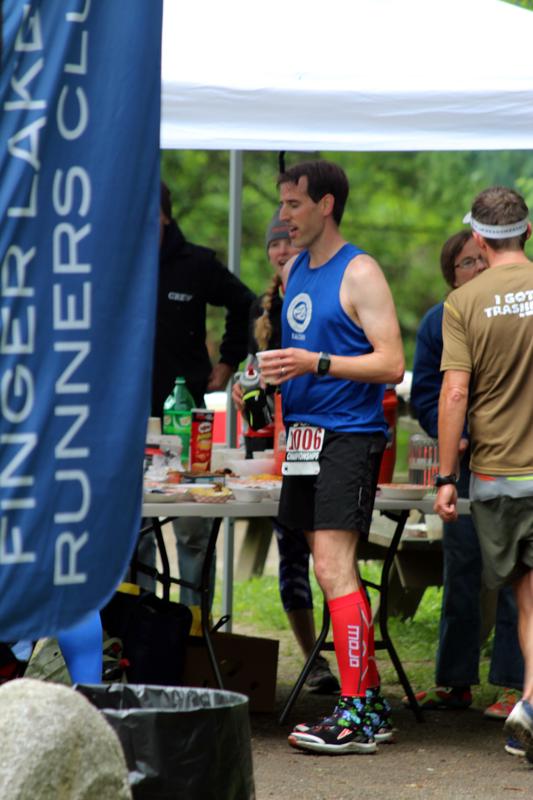 One embarrassing story: remember that new handheld bottle I bought? For the first 15 miles, I couldn't for the life of me figure out how to drink out of it. I joked with one runner (who had a different brand and couldn't help) that it was like nipple confusion. I resorted to unscrewing the cap when I came to steep pitches and drank that way. At mile 15, with a sharp tug of my teeth I figured out that the spout has an "in" and "out" position, and from then on it was just fine. Talk about feeling stupid, though.

I was feeling really good as I came to the halfway point, though near the end my quads and calves were getting a bit thrashed. I was so happy with my salt levels (no cramping, which has plagued me in the past) and my stomach. I was keeping things down just fine.

I arrived back at the start for some more refueling, a quick tune of my muscles with a stick that someone had in their drop bag (why didn't I think of that?) and then headed back out for the last 25 miles.

At this point my legs were pretty much done and I was slowing considerably. My mind never went negative, though, and I kept putting one foot in front of the other. My 5 mph average pace slowed to about 3, and some quick math made me tell Amy when I saw her at mile 28 that she'd better grab some dinner on her own, since I wasn't going to be done until 6 or later. Elizabeth and Xander ran me in to the Old Mill aid station at mile 28 (video below), and I was a man of many words when my Dad asked me how my toe was holding up.

I kept on going, having some good talks with fellow FLRC runner (and club president) Joel Cisne and others as I made my way over to Buttermilk again. A few miles out from there, I began to feel, well ... weak. That's about the only word I could use to describe it. I was getting light-headed and a bit hungry, and realized that I probably should have been eating MORE. Believe me, I was consuming what I thought was appropriate, but it clearly wasn't. My Mom and Dad were at Buttermilk, and saw me at my lowest. I seriously considered dropping out here, after 37.5 miles of running, but then I thought back to the sign at the start. Yes, quitting is forever, and I wasn't done yet. Through the assistance of my parents, Amy Schwartz Lopata and Joe Reynolds (and a very comfortable chair), I spent probably 10-15 minutes reloading with whatever they'd bring me: broth, Swedish Fish, Oreos, Fig Newtons, peanut M&Ms, salty Terra chips ... and I'm sure there was plenty more. I felt good enough to steel myself for the last 12.5 miles, got off my ass and headed out of the aid station. 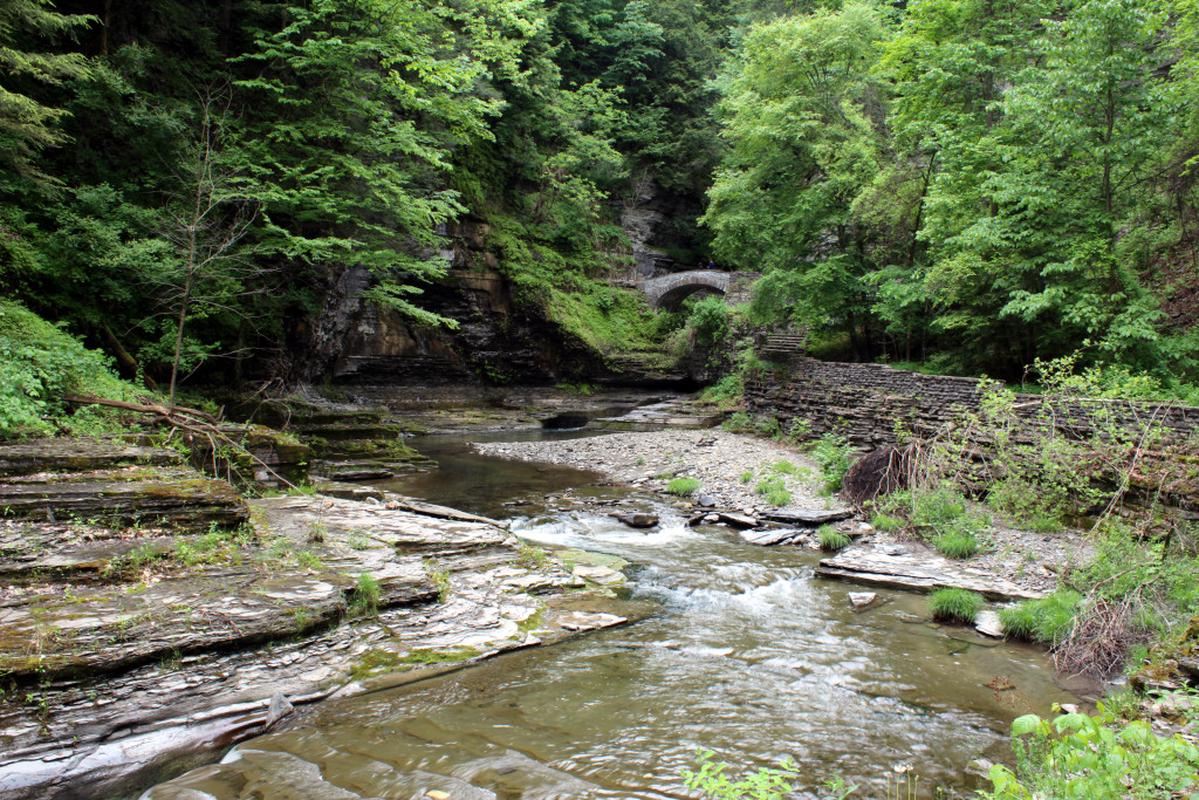 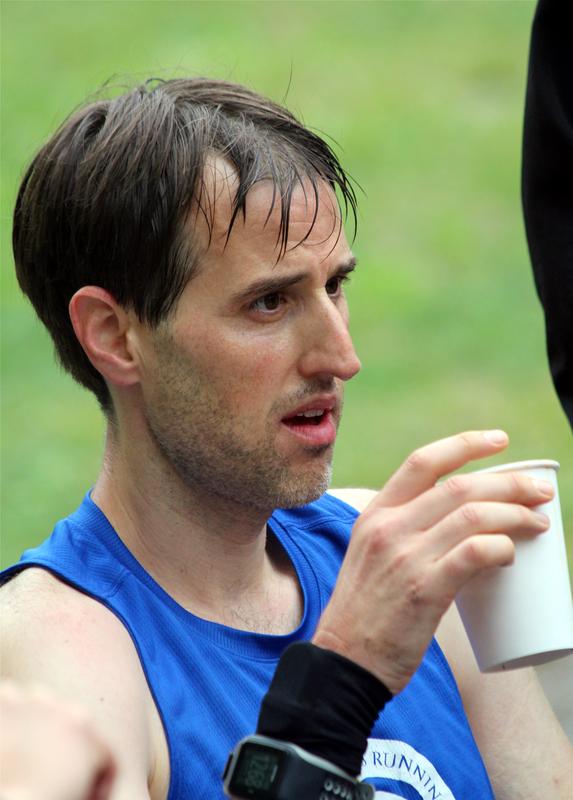 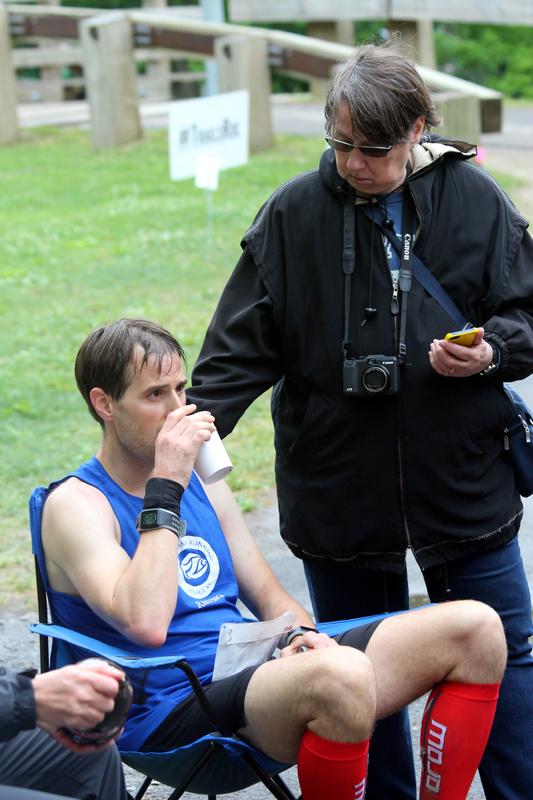 This last stretch I enjoyed the company of a few runners hitting the pace I was, one gentleman from Pennsylvania in particular. He and I fast-hiked and ran much of the remaining distance together. It's always nice to know when someone is going through what you're going through, and we were definitely in the same boat. My nutrition had been sorted out, but my legs were thoroughly fried. Each step was one step closer to the finish, and that's what we focused on. Amy was still at the Old Mill at mile 47, and I reveled in telling her and our friend Jenny Henion, "I'm going to do this!" Near the end, it was more a hike than a run, but as the rooted trail turned into soft grass, I felt compelled to run again. The last mile, as I approached the final turn to the finish line, I beamed inside. I was going to do this! I ran across the finish line at 13:01:50, feeling both an amazing sense of accomplishment, and a need to sit down and take my shoes off. 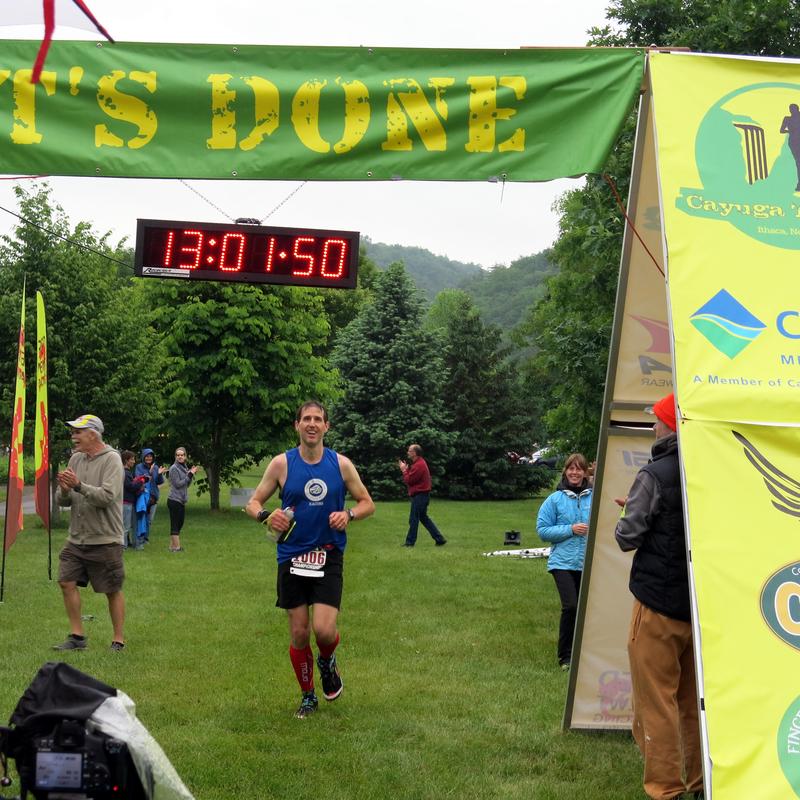 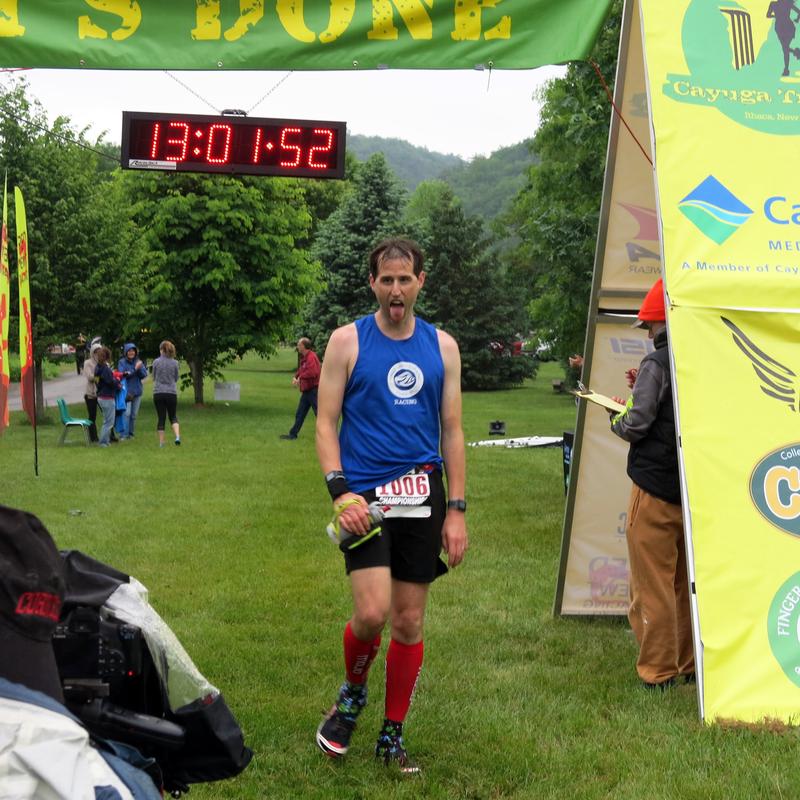 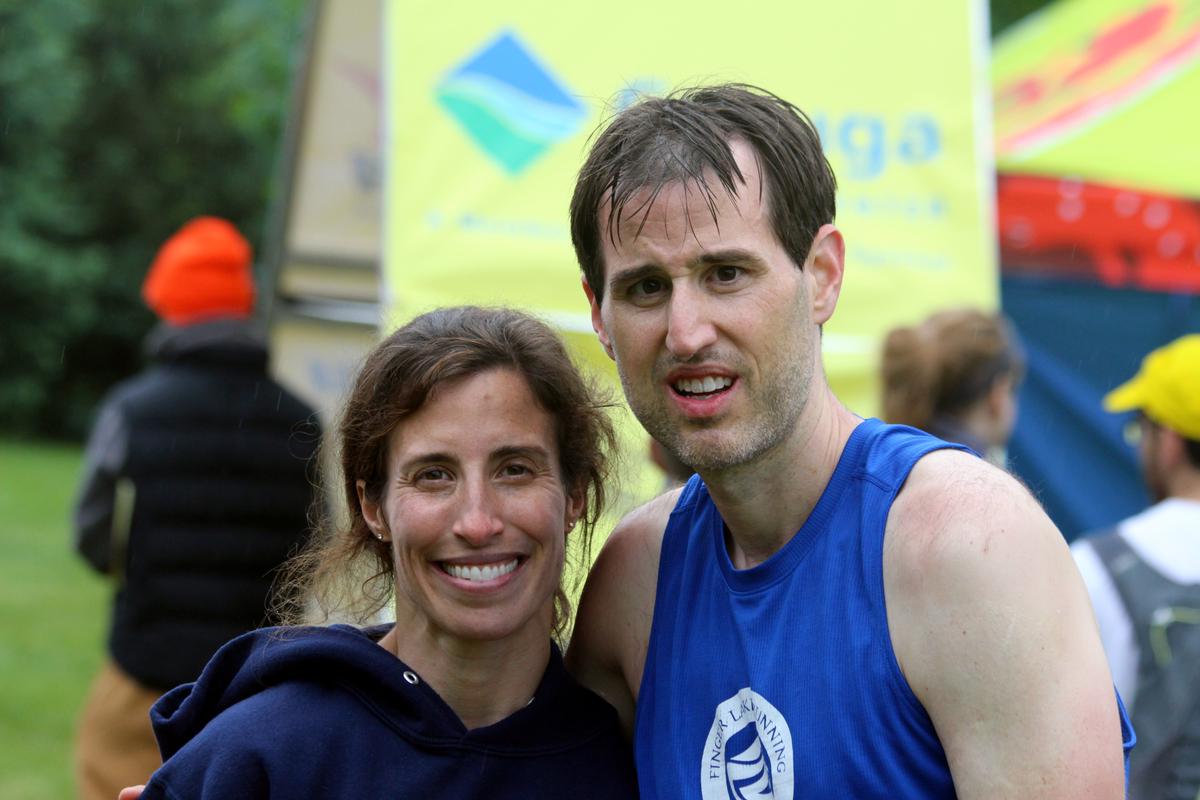 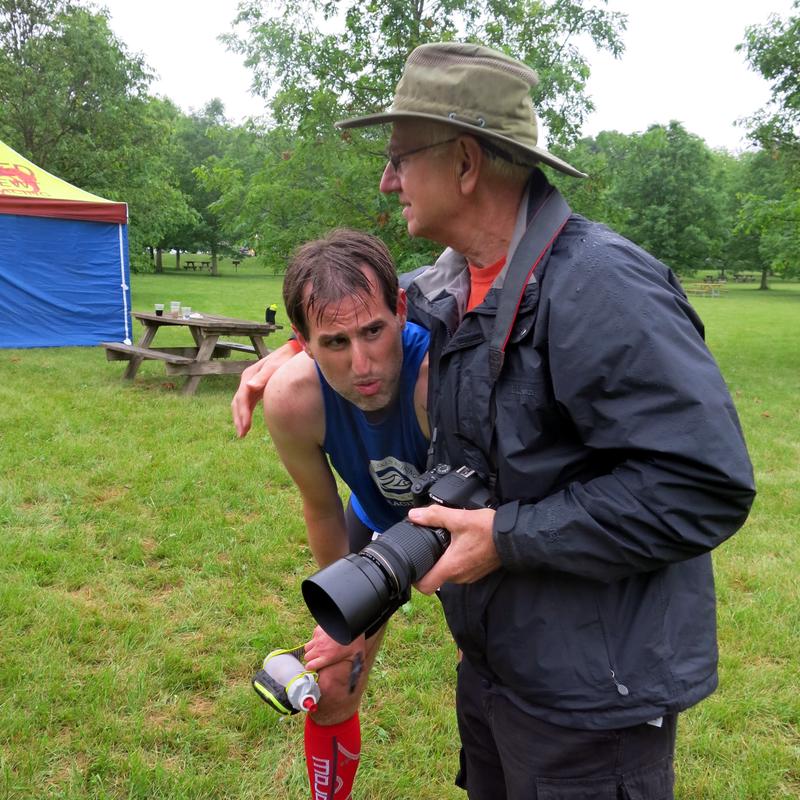 Amy whisked me away to the car after a few photos, where I promptly took my shoes and socks off, laying my wet, wrinkled feet on a blessedly dry towel. There had been 8 creek crossings (one thigh-deep) throughout the race, and I did change my socks mid-way through the second loop. Still, my feet were hurting but not damaged, and it felt SO good to sit. Believe it or not, my previously-fractured toe let out not a whimper the entire time. I had buddy-taped it to its neighbor, and it held up marvelously. Even now, 2 days later, it's feeling fine with no evidence of further trauma. Yes! I enjoyed the brief drive home with Amy, who had brought the kids home earlier in the afternoon. They had made wonderful signs and some delicious peanut noodles for dinner. I felt (and feel) so blessed to have a wonderful, supportive family!

The GPS vertical is off, but the miles sure aren't. The race advertised 9,000+ feet of elevation gain, and I felt every single one of 'em. A huge thank you goes out to Ian Golden, Red Newt Racing, Finger Lakes Running & Triathlon Company, TrailsROC and everyone who came together to make Cayuga Trails 50 such a wonderful event!