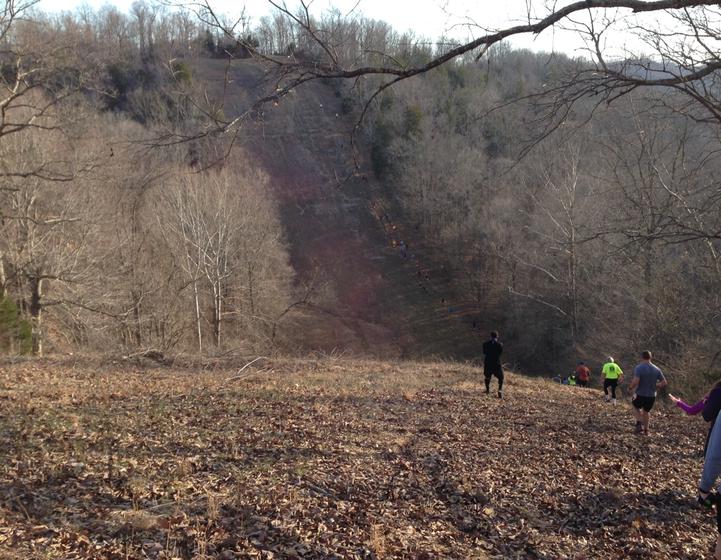 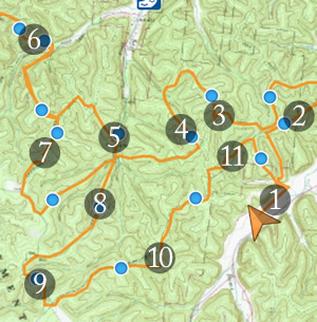 My friend Eric and I wanted to find a time to meet up and hang out for the weekend, since we no longer lived in the same town. Given my plans for a summertime 50K, I put a few options out there with the caveat that we had to run as part of the weekend (have to keep up with the training plan!). Nashville was on the list, and we decided to meet up for the Hardwin Music City Trail Ultra.

After some initial emails from the race organizers, we were a bit worried about ticks and snakes. Apparently the prior (inaugural) year of the race, held in later months where the grasses were taller, these two critters were a problem. We promptly bought 12-inch socks, and made sure to have bug spray with us. We also started training in earnest for some elevation change (for the 25K, that's 3,300 feet of aggregate gain).

We arrived at the starting area about an hour beforehand, in time to warm ourselves by the fire. It was 40 degrees at the start, but the day's high was forecasted into the high 60s. There was a great pre-race vibe, and a very tight-knit feel to the groups of runners arriving. After some pre-race instructions, a skit with scantily-clad gladiator and promises of keg stands on Mount Olympus for finishers, we were ready to start! 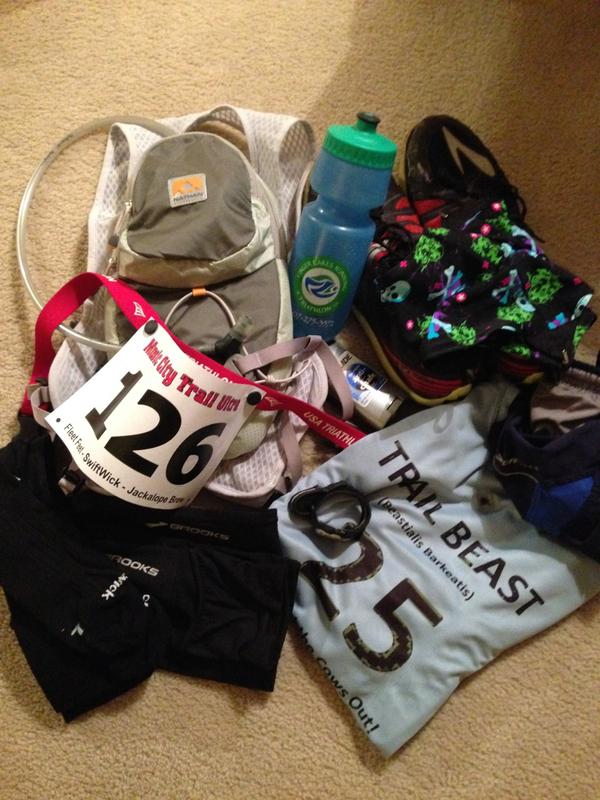 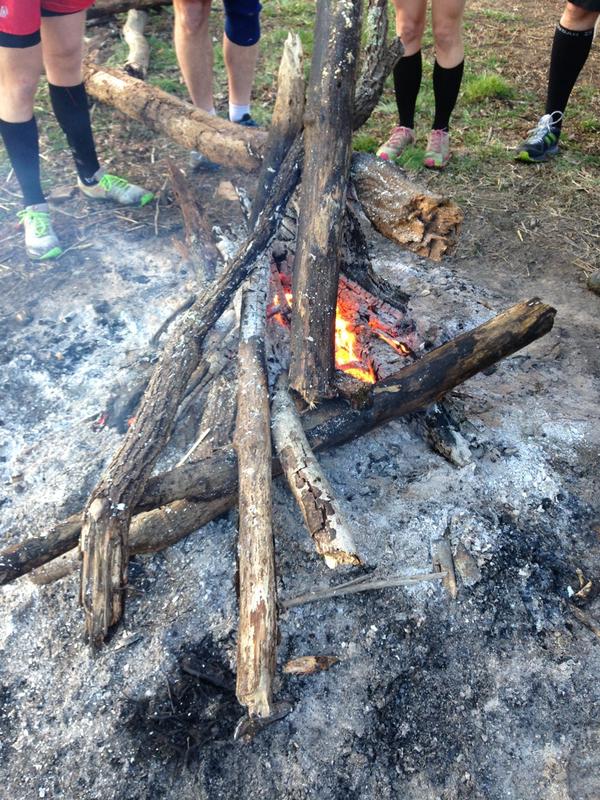 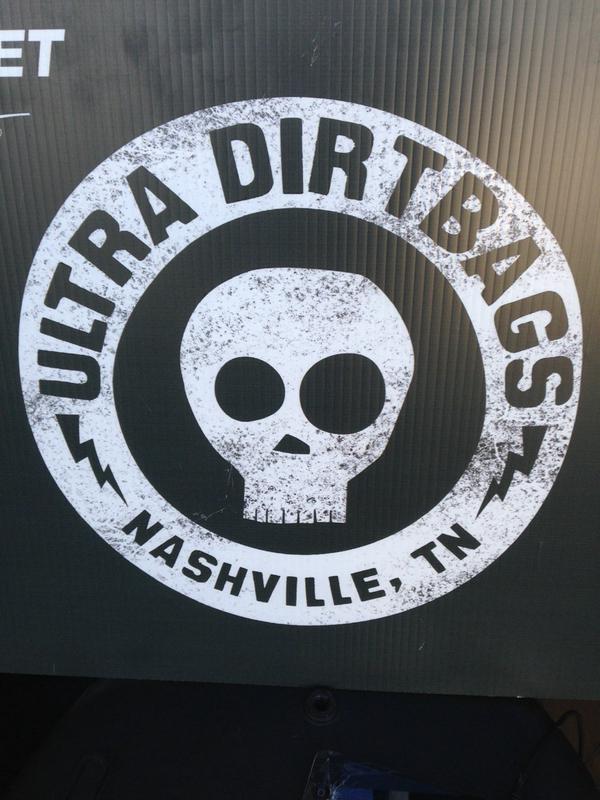 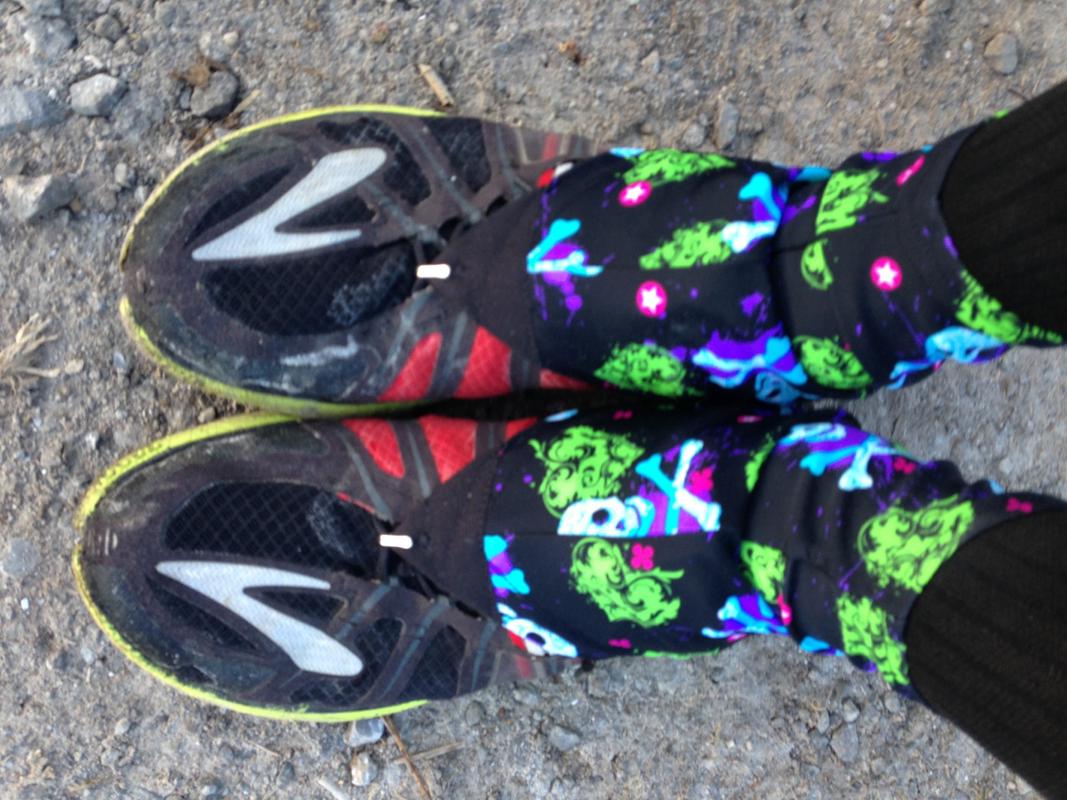 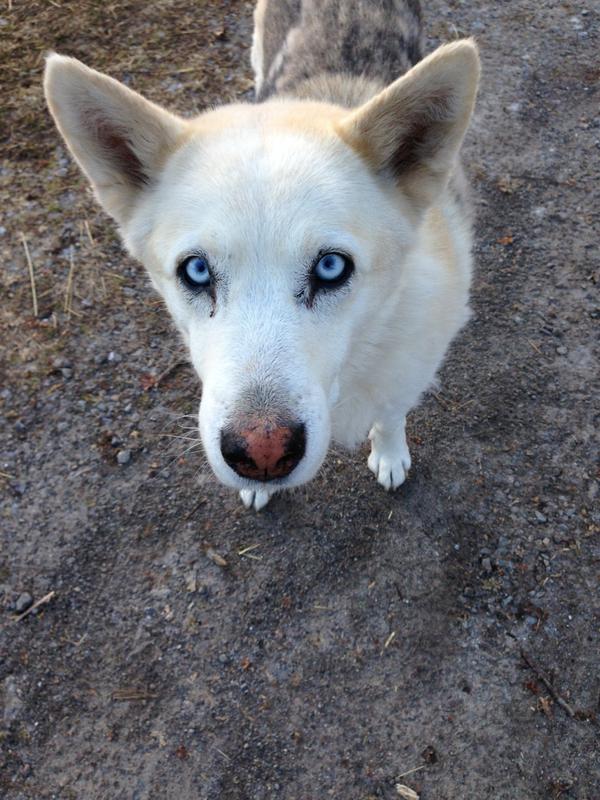 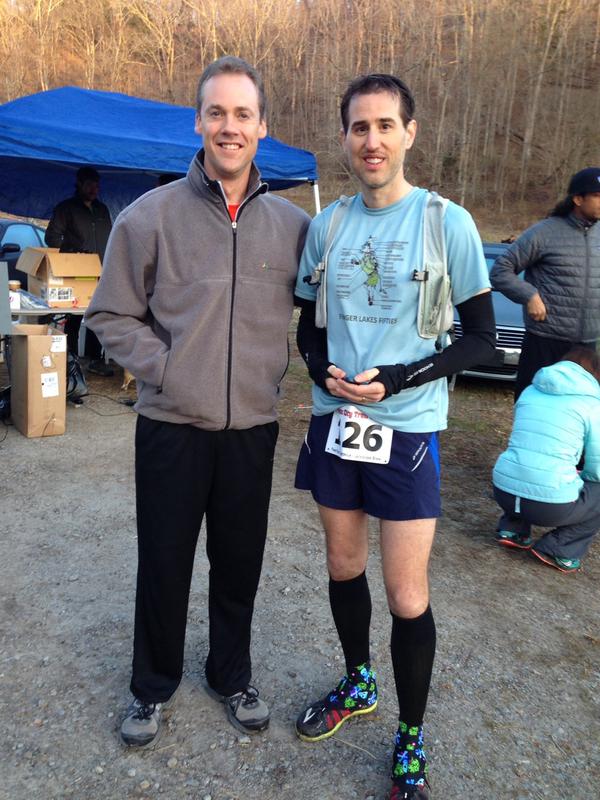 I started off across a pasture, keeping an easy pace and being mindful of the random deposits of horse manure. We hung a left into the woods, and were immediately confronted with a pretty good uphill. Hello, power hiking! The footing was relatively easy with no exposed roots, though the trail was covered with leaves.

This part of the trail was well advertised on Facebook. It's main feature was a steep downhill, quick stream crossing, and then a massive uphill climb. Click to zoom in ... see the colored dots on the far side of the image? Yep, those are people. I think I might be one of 'em.

This was probably the most pleasant part of the run. I settled into a really good groove along a Jeep road heading gradually up, down and up again. After the power hiking uphill, it felt really good to stretch my legs here.

Now this is my FAVORITE part of trail running. Narrow singletrack, pitched downhill, undulating left and right. I resisted the urge to hoot and holler (though I should have), focusing intently on not rolling an ankle while keeping a good clip. Time flies when I'm in these conditions, enjoying every strategic footfall. Great fun.

Unlike Ghostbusters, crossing this stream wasn't a problem. Barely an inch of water here. I was carrying my own water, so bypassed the aid station and headed down into another stretch of woods, where I was greeted with a few more easy stream crossings.

This was the out-and-back section of trail. At the terminus (for us 25K-ers; 50K runners went beyond) there was an aid station with water, bananas, Skittles and bars. I thought the Skittles were M&Ms so picked up a cup. Not wanting to discard it after realizing my error, I covered the top with my hand and ran with it shaking it like a maraca. I ate one every so often and it provided me with a nice energy boost. I was also carrying Shot Gel, and consumed two of those on the hour during the race.

I love out-and-back sections. It's so nice to give and get encouragement from other runners. The stream crossings in this section were deeper, giving my feet a cold yet refreshing bath each time. I saw one poor guy slip and dip one side of his body in the water. It was cold, but maybe refreshing, too? On the way back, I got off course a bit and was instantly grateful to the organizers for giving us the waypoint file in advance. I was using an app called Gaia GPS for the iPhone, and it saved my butt here. I paused, took a picture, and then oriented myself back to the proper trail.

With the out-and-back section behind me, this section opened up onto a rutted road, followed by a brief stretch on a gravel road, and then back into the woods toward the first aid station. This was lonely: nobody in front, nobody behind. I turned on some music to keep me going, as my motivation was waning. I felt good as the aid station came into view, and was grateful for the volunteers to help keep us pointed in the right direction.

Still alone, this was uphill again out of the aid station. I power hike a bunch of this stretch, and had to hop off the trail at one point to allow an oncoming dirt bike to pass. I think he missed the sign that said "Foot Traffic Only", or maybe I misread that. Before I knew it, I was back on that gravel road headed south for a brief bit.

I hadn't been using the GPS for anything but orienteering, so had no sense of my pace or duration throughout this race. So at this point, when the gravel road cut east to head back to the start, I foolishly thought I was almost done. Nope! This was the beginning of the longest stretch (mentally) of the race for me.

I started catching up to some of the 10K racers ending their loop, and had a 25K racer catch up to me. He helpfully pointed out that there was just a mile left, but I doubt the accuracy of that in hindsight. Definitely more than a mile, but nice to have the lift at the time anyway.

Waypoint 11: This Must End Soon

There were some big up- and downhill pitches before the end, each more demoralizing than the previous. I thought several times that the end was just around the corner. After the swing to the south again, I was right: almost done. I came across another runner walking around as if he'd lost something, and then I realized I'd lost it too: the trail! Again, the GPS to the rescue, and we both headed off down the last leaf-covered hill, switching back and forth until we hit the flats of the horse pasture once more. 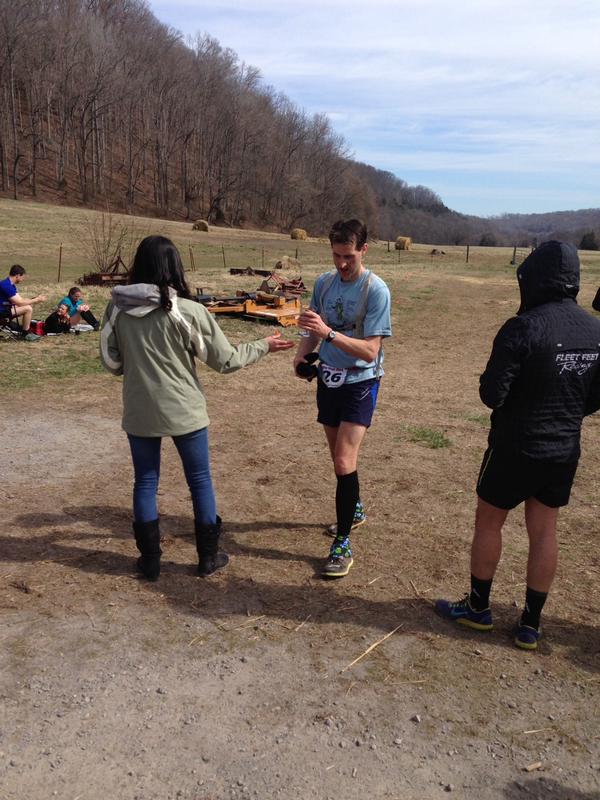 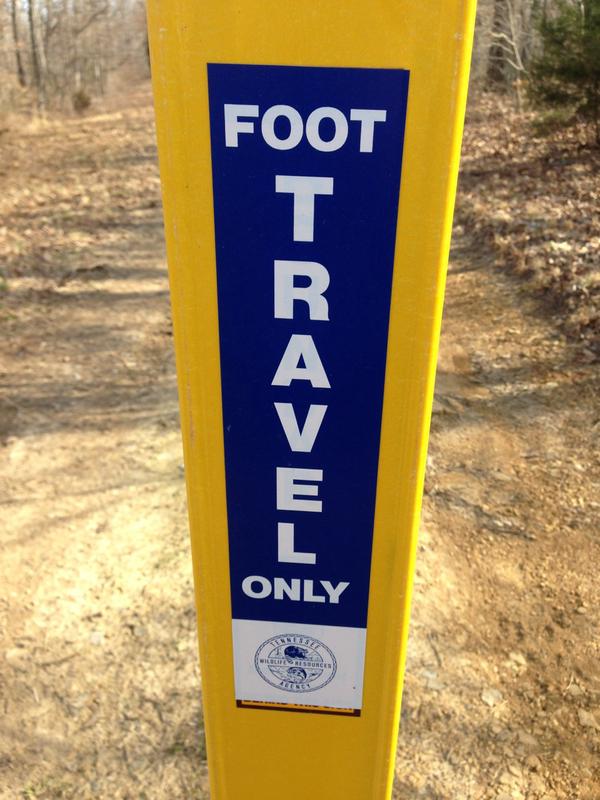 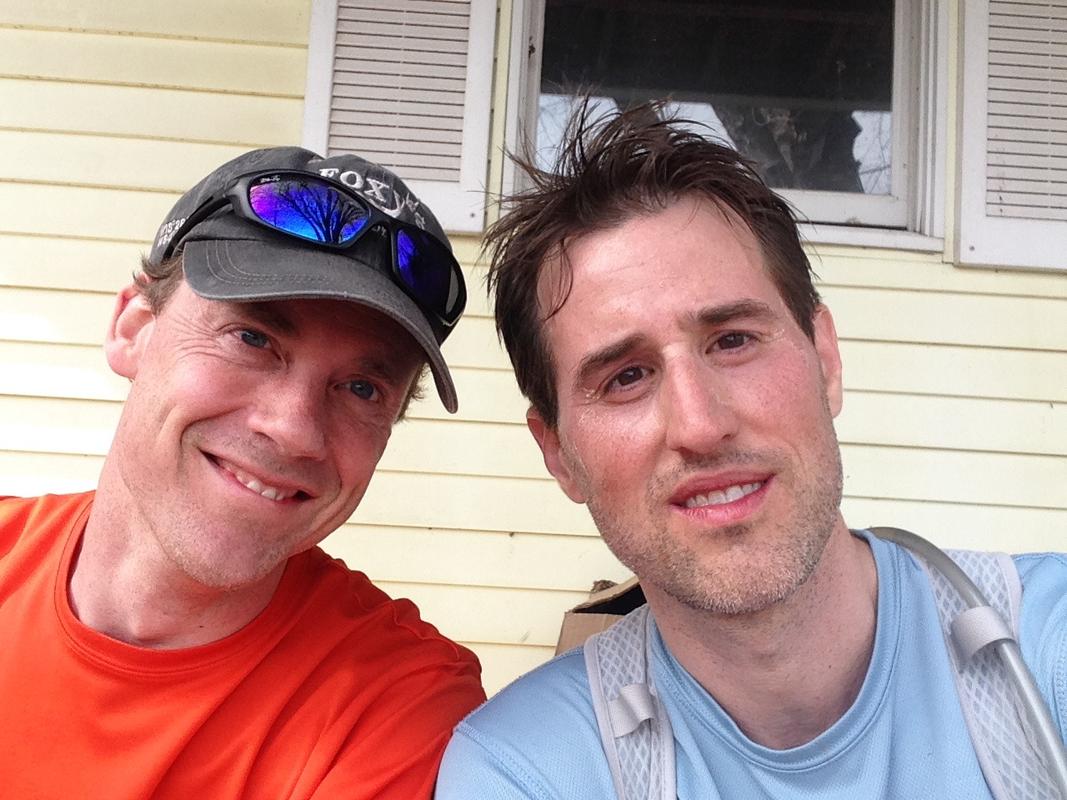 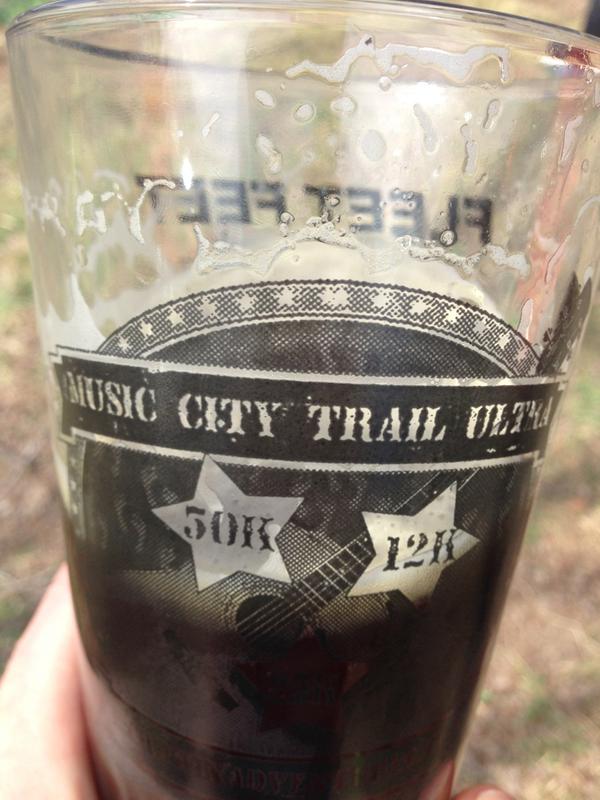 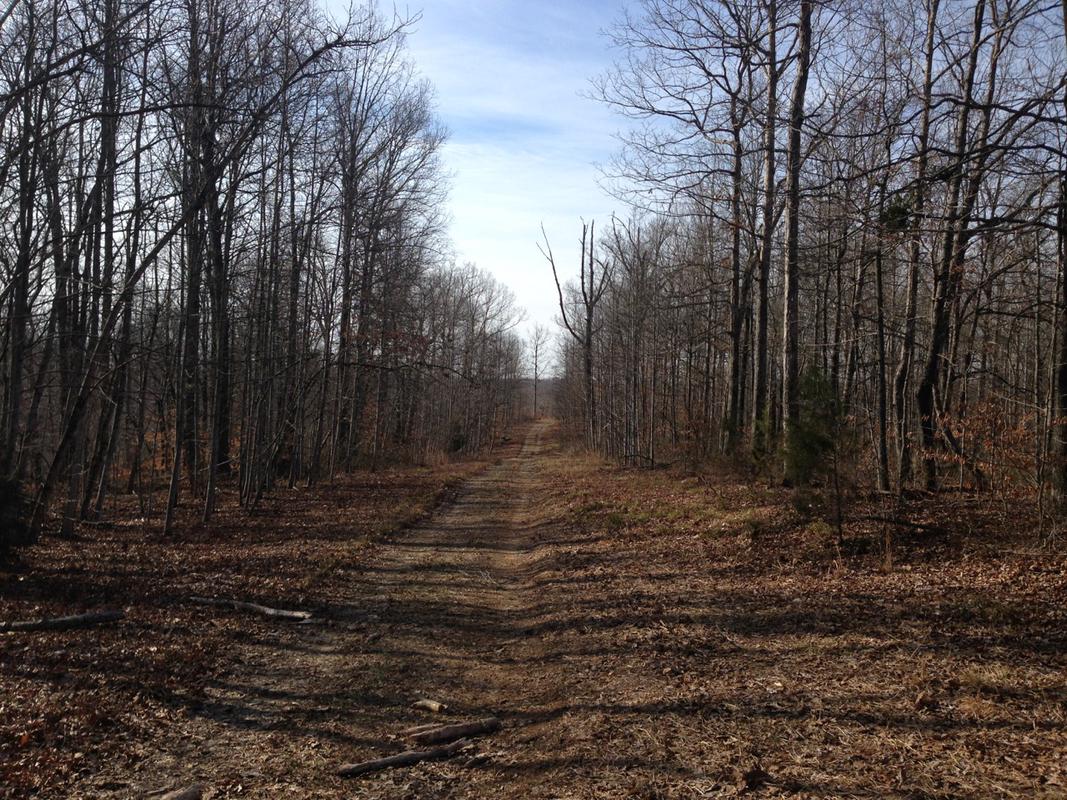 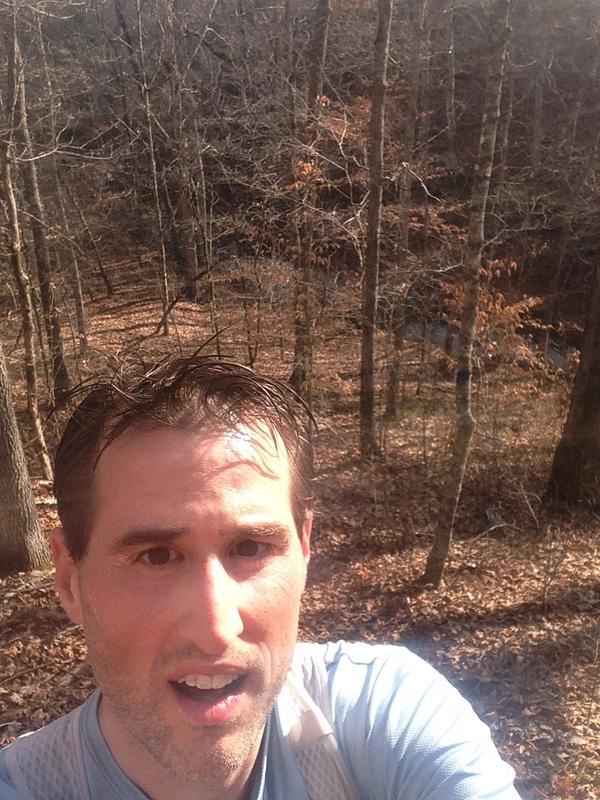 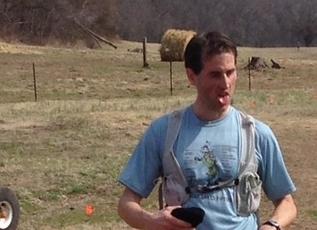 Eric got a great picture of me as I was crossing the finish line. The expression on my face tells the whole story: relieved to be done! The post-race festivities were great, though. Where else are you handed a pint glass at the finish, then guided over to a keg to fill 'er up? I caught my breath, wiped the salt off my face, and enjoyed the rest of our time there catching up with other runners and talking about the race. Oh, and those ticks and snakes we were warned about? Neither in sight, thanks to the moderate March temperatures and lack of foliage. I was really thrilled with my results: I came in 12/55 overall, 3/16 in my 40-49 age group. The thought of doubling the distance, though, which I'll do in July at the Finger Lakes Fifties this summer, made me realize that the next 16 weeks of training are crucial. I'm sure that with the effort that goes into the impending training, the 50K will be the right distance at the right time for me.