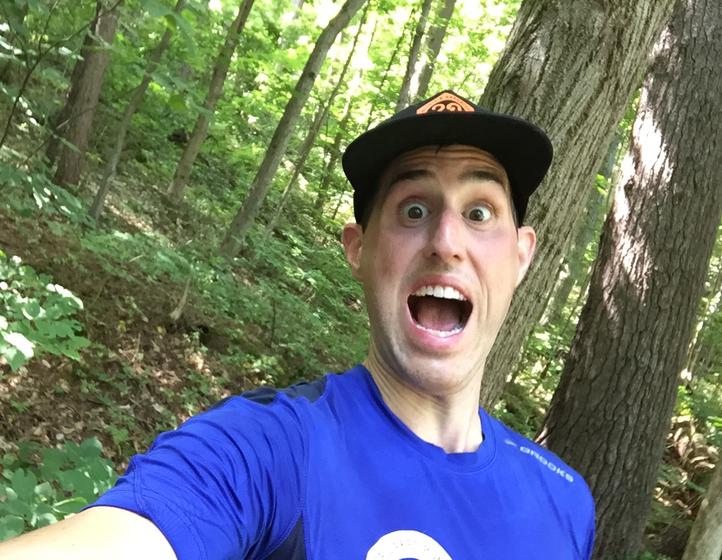 I had too much fun in last year's inaugural Lucifer's Crossing race from Red Newt Racing not to do it again. This year did not disappoint! There was amazing weather for this year, similar to last year, although we didn't have the soaking rains the weekend prior, meaning the trails would be nice and dry. I arrived just a few minutes early, in time to calmly retrieve my bib, get my Dirty Girl gaiters adjusted, and have some great conversations with fellow running friends before getting started.

Last year's start was further along the course than this year's start, due to some pretty epic flooding. This meant that we got the pleasure of not one, but TWO water crossings this year. To be fair, the first crossing is across a roadway where, by design, a creek crosses with 3-6 inches of water. Shortly after Ian blew his traditional ram's horn to start the race, we were splashing our way through this waterway and then began the ascent of the North side of the trail. I had lined up near the front, and found myself quickly out of breath as we climbed through the woods. My heart rate spiked to 170 at this point, and never backed off until the end of the race, when it was a hoppin' 185. I struggled to get my shirt off while running, and was happy to do so without having to stop (ungraceful as it was). The humidity was really bad! 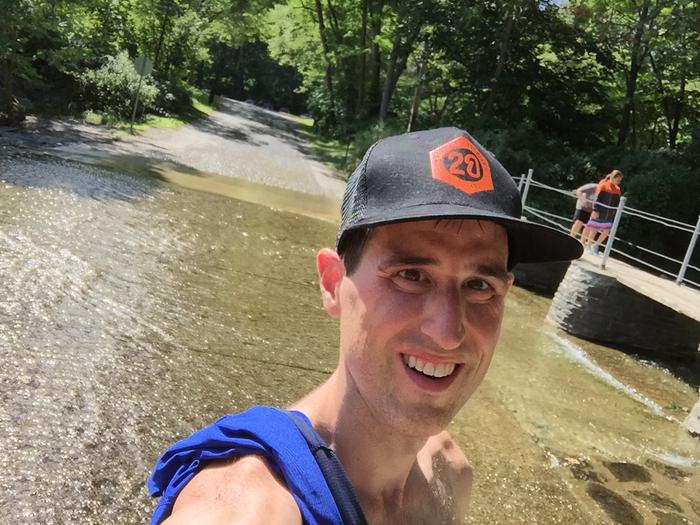 I walked some of the longer runs of stairs, making a point to keep on moving as much as I could when the trails resumed. For flights of 5 or fewer stairs, I tried to bound up them quickly. Before too long I was as the long flight of stairs adjacent the falls, which was quite a sight. Again, last year this part of the course was re-routed due to damage from the flooding. Still the same big elevation gain, though (my watch reported 874 ft over the race).

After the Old Mill, there were a few delightful minutes running narrow, level singletrack with foliage tightly packed on both sides. Then we were at the top water crossing, a deeper crossing that got my feet nice and wet, and even a few splashes up on my shorts. I was grateful to not slip here, and quickly mounted the bank on the other side and kept on running.

The remainder of the run was really, really fun. There was more "up" than I remember from last year, but after it rolls a bit, it really starts to go downhill. There was one turn where the runner in front of me missed the flags and I started to follow him. I caught a cluster of flags in my periphery, though, and stopped short in time to make the turn. The runner behind me passed me at this point, and I yelled "Turn!" at the runner in front of me who had missed it. We ran tightly as a pack of four to the end, jockeying for position as we went, taking turns leading and following. I really enjoyed certain parts of this, most notably those that were steep, curvy downhill pitches. What fun to use the terrain to keep your body upright, running at a super-fast clip! Again, grateful to NOT fall.

And then it was done! The trail spits you back onto a gravel road that, after 100 yards or so of downhill, leads to a grassy stretch to the finish line. I took a few minutes to gather my breath, had one of the most delicious peaches I've ever had, and then enjoyed encouraging other runners and talking with more people who mingled around the finish area. 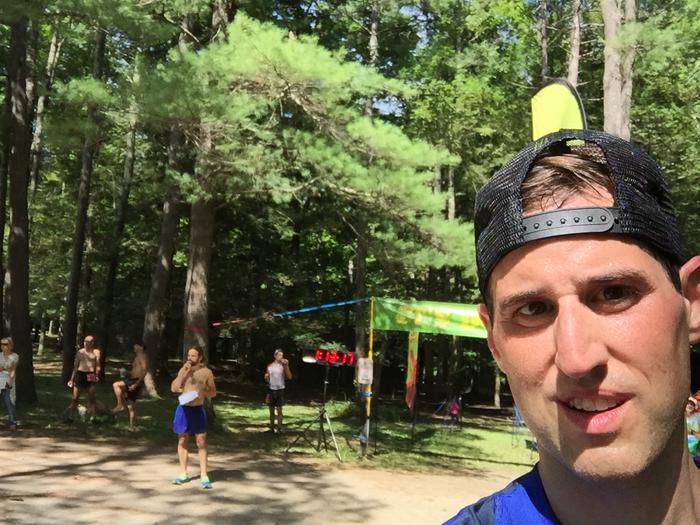 Finished overall 12th of 92 runners in 57:34. I shaved 8 seconds off last year's time, which made me really happy since this year's course was ~.2 miles longer!