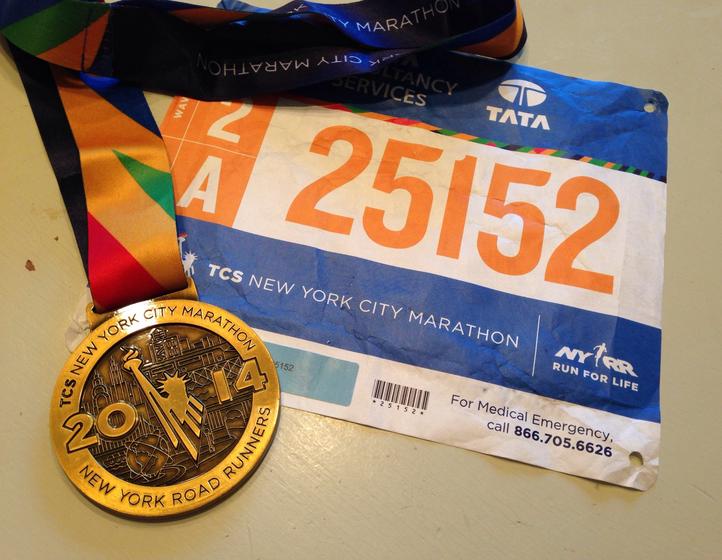 The New York Marathon has seemingly been a long journey for me. Amy and I both put in for the lottery last year, and the luck of the draw had me running and her spectating. I have such mixed feelings about the lottery, as once you're in, you're in! So, I added this marathon to my training plan and got to work.

Early on in my training cycle, I thought briefly about trying to qualify for Boston using one of the plans in our "Run Less, Run Faster" book. The paces seemed really tough, though, so I put that on the back shelf in my mind. I had a really great training cycle after this summer's 50K, and also a great half marathon in Corning, so was feeling really good about this race. In fact, I had convinced myself that a Boston Qualifying (BQ) time was in reach. I'd ran one of my 20-mile training runs at an average 7:24 pace, 2 seconds ahead of BQ. There was a big caveat, though. When I put in for the lottery (a year ago), I optimistically at the time put an estimated time of 3:45, but my current training put me at a 3:15. I was assigned a corral with the 3:45 runners, though, so I had no idea how that would affect my race.

The most important thing to me, though, was that I had trained healthy. No issues to speak of, so that was progress from my prior marathon (more on that below). 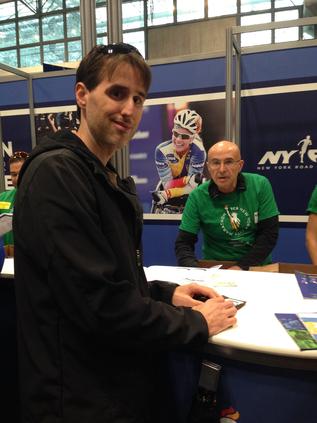 Thursday, I began looking at my options for getting from my hotel in Jersey City (we booked it when we put in for the lottery) to the Whitehall Terminal for the Staten Island Ferry. I was shocked to find out that the PATH service to Manhattan was still shut down on the weekends (it was supposed to be done) and the only viable option for me was to get a hotel shuttle to another PATH station in New Jersey, take a train up to 33rd Street in Manhattan, then a subway down to the ferry. It would have taken more than an hour, and I had to be on the ferry at 7a! No way.

Thank God for the Internet: the Best Western in lower Manhattan had a room for us, within walking distance of the ferry, and the room was ... cheaper than the one in Jersey City? Yes, please. 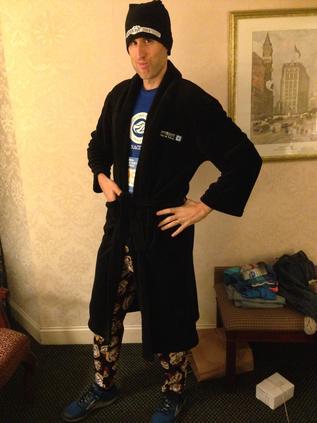 Saturday was a rainy day in New York. As the race morning was forecast to be in the low 40s, I had procured an amazing pre-race outfit of a black robe and pajama pants at the Salvation Army a few days prior. The only thing left to do was pick up my packet and shirt at the Javits Center in the early afternoon, wander the Expo a bit, and then enjoy the rest of our Saturday. We did some light shopping at Macy's and headed back downtown to get organized for the next day.

We had a lovely pre-race dinner at Il Brigante. It was cool to see other runners there, too. It was a quaint Italian eatery with delicious entrees, and was also a quick walk back to our hotel! 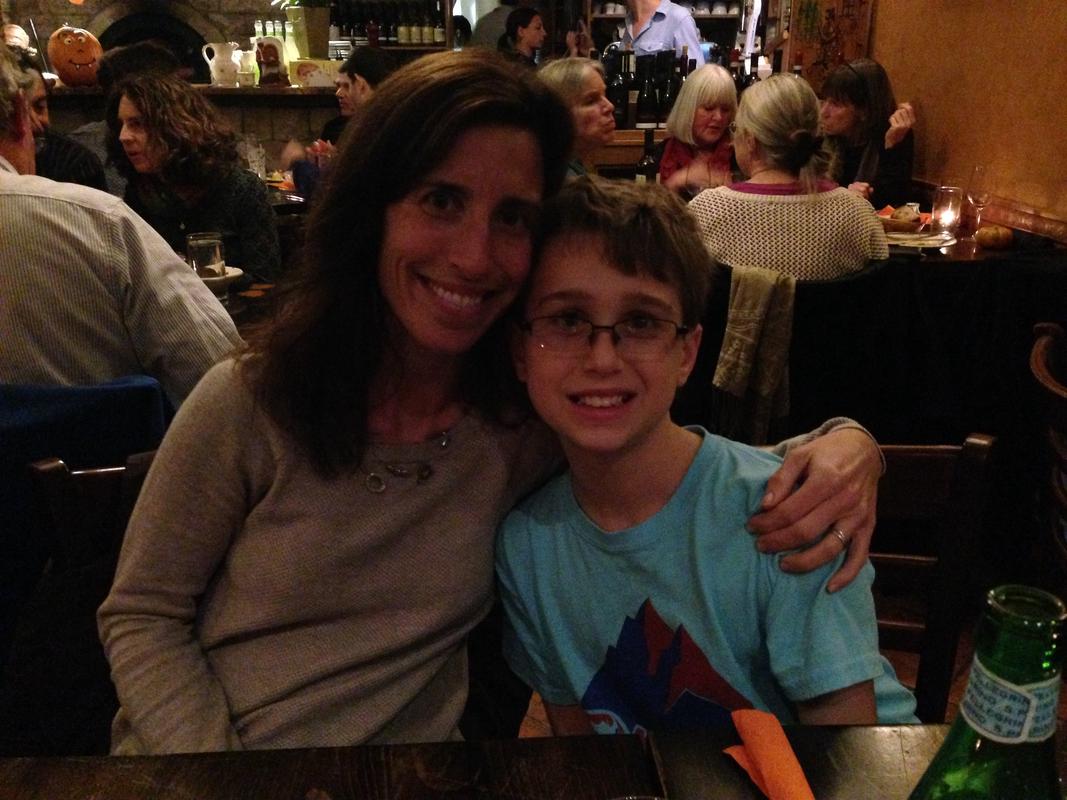 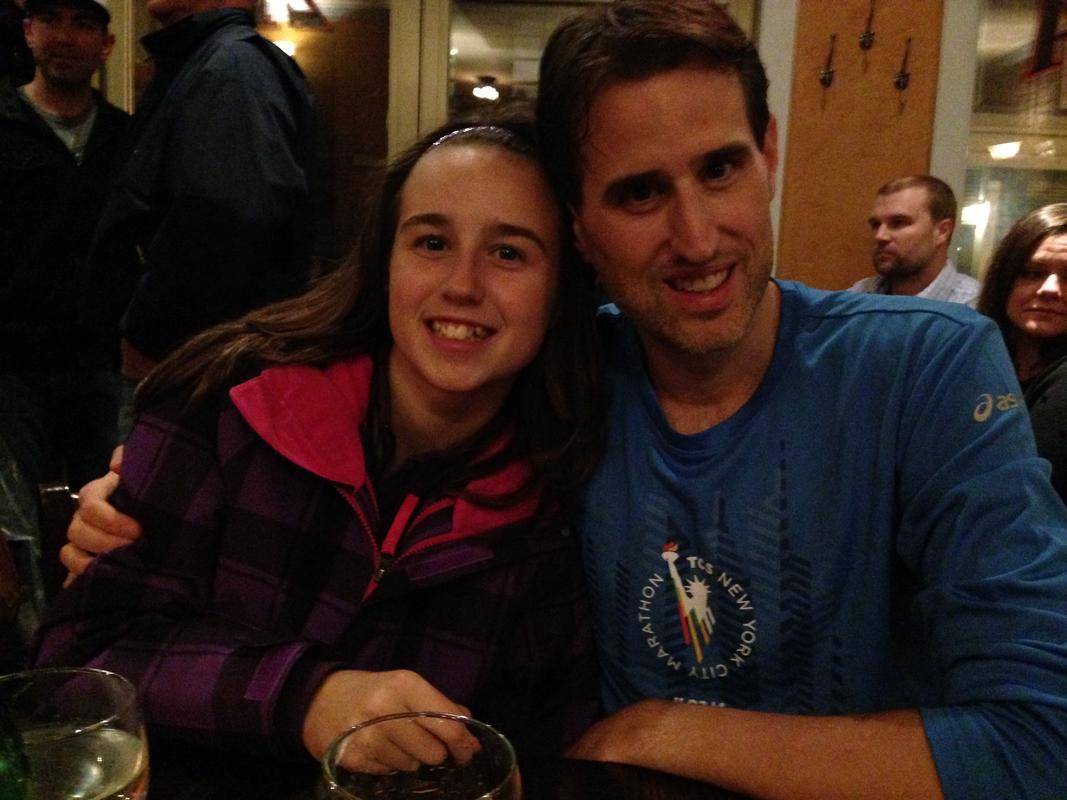 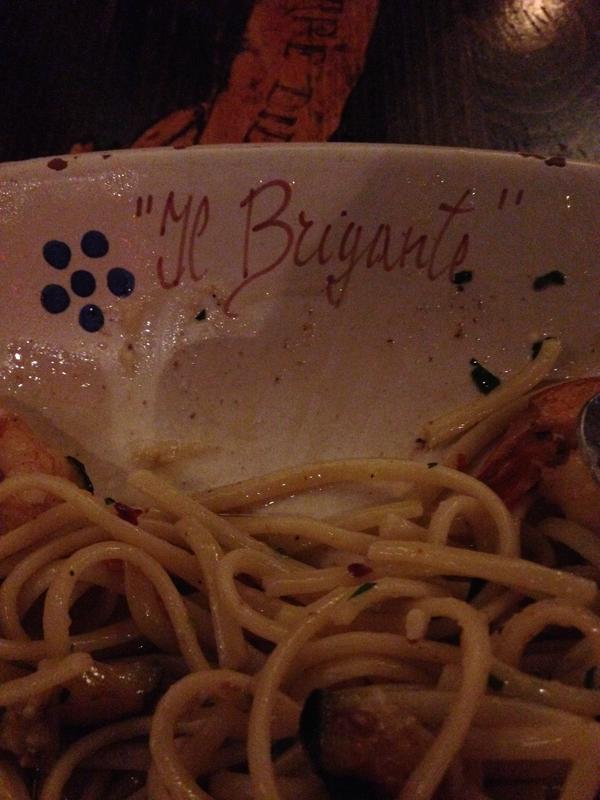 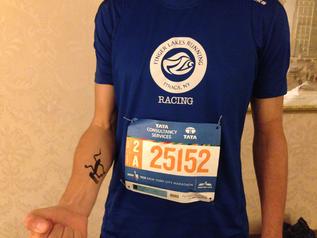 Getting to the start on Staten Island couldn't have been more efficient. I woke (quite naturally due to daylight savings time) at 5:30a, donned my FLRTC singlet, downed a bagel, some pizza and coffee, and applied my Kokopelli tattoo. I said good-bye to Amy and the kids and had a nice walk to the ferry terminal. I walked right on and enjoyed a scenic ride to Staten Island. We disembarked, boarded buses to the start, and then had a thorough security check by the NYPD counter-terrorism unit. The start villages were cold, but well-organized, and I enjoyed chatting up a couple from Utah, a gentleman from Holland and a runner from DC. It wasn't long before my Wave 2 was called, and I found my way to Corral A. 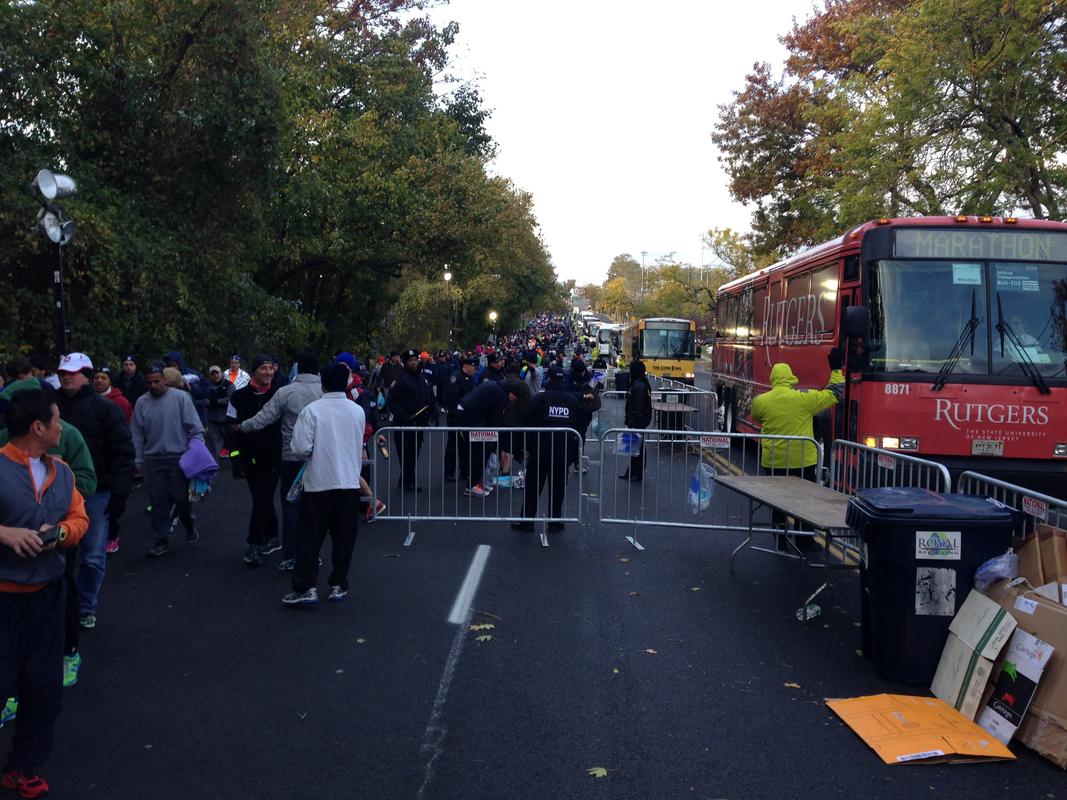 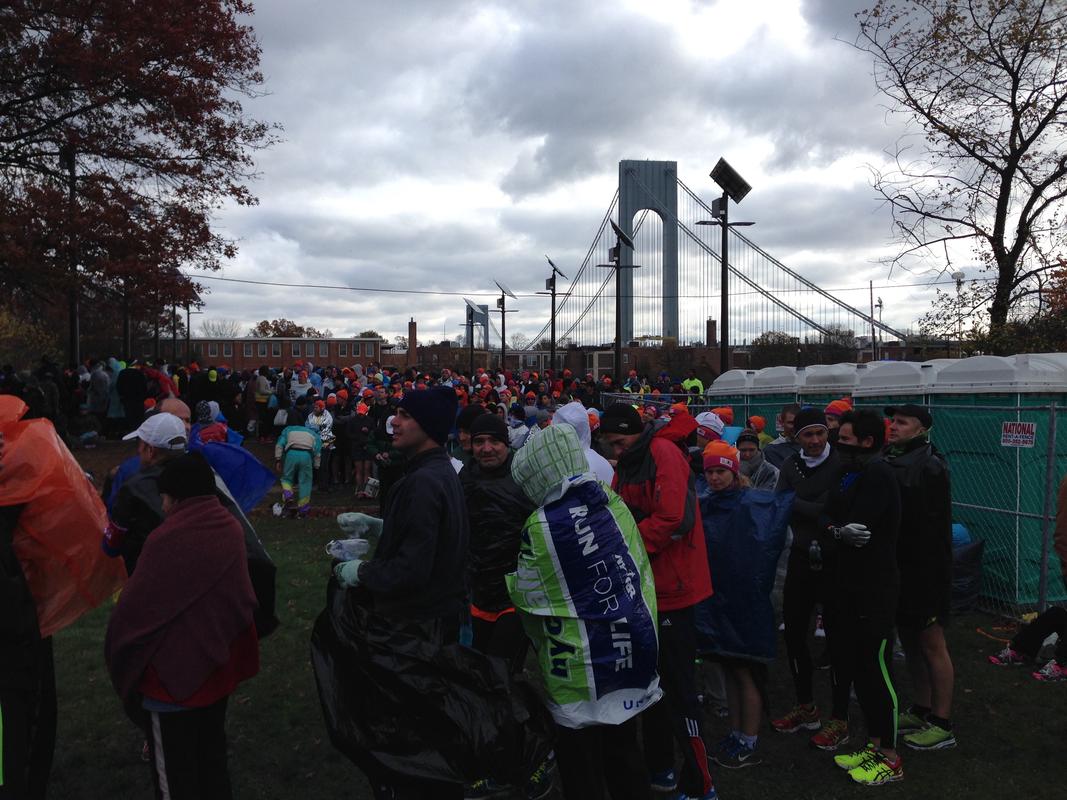 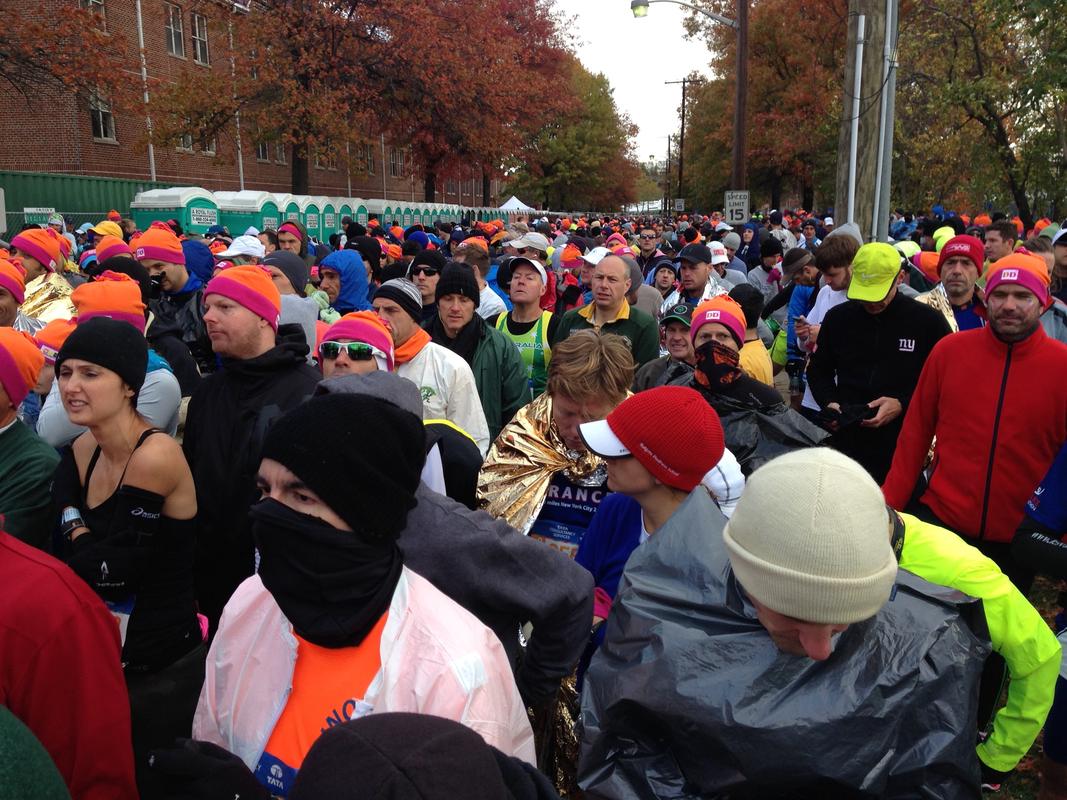 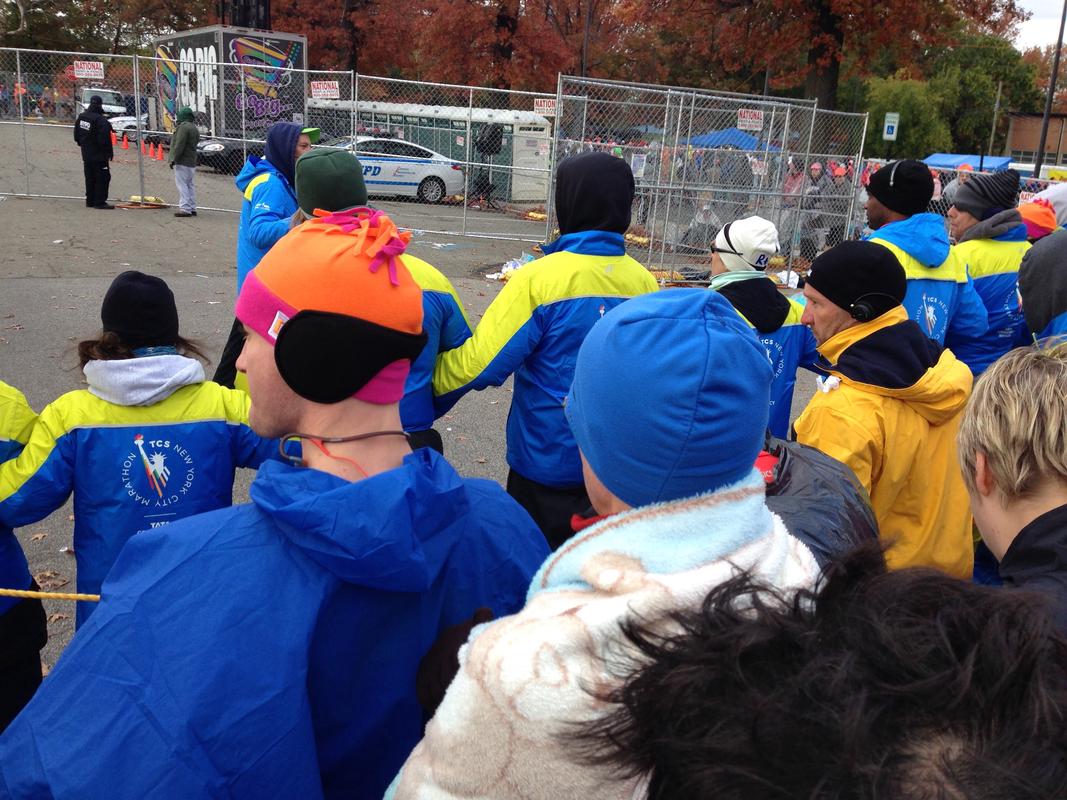 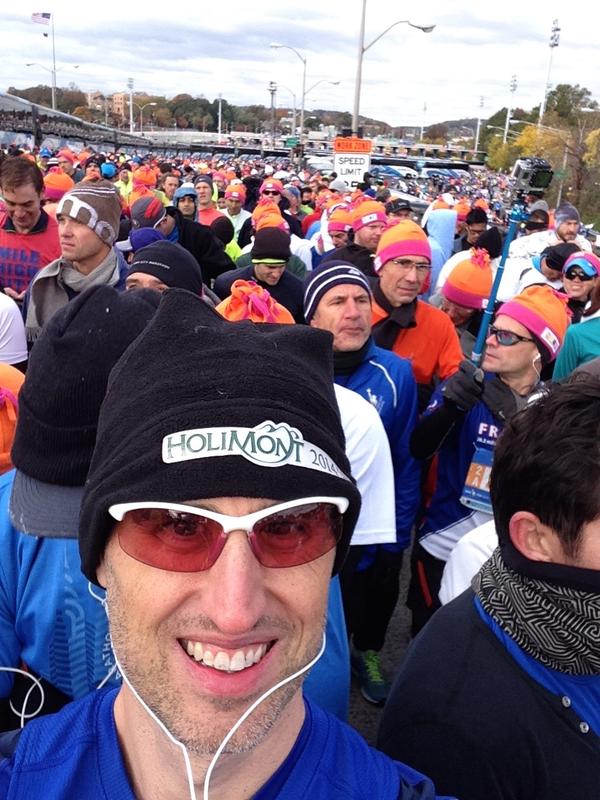 I was able to get into the front of the Corral, so after we slowly moved our way to the start line, I found a surreal scene. Beyond the start line, the Verrazano Narrows bridge was empty. Lighter bits of clothing swirled around in the wind, and it was something from a post-apocalyptic movie where we were all about to run for our lives across a deserted 2-mile bridge. A quick national anthem, and we were off. It was downright surreal. In front of me, just about 10 runners on a desolate stretch. At one point, a runner in front of me took an article of flying clothing in the face. A particularly strong gust blew me to my right in mid-stride. We must have looked like drunken runners! It was nice to come off the bridge into the relatively sheltered streets, and I got into a good groove as we ran the streets of Brooklyn. I was on my numbers (a bit ahead of them, actually) and was feeling great.

The crowd support in Brooklyn was amazing - the best of the entire race. I got to see Amy and the kids at Mile 8, which was super cool and quite a lift!

The only personal complaint I have is the sheer volume, not from the crowds, but from the bands. The music was SO loud at times, and it felt rather ridiculous to have my own earbuds in. I am a very introspective runner, and not once in this race did I feel like I really focused on myself. And that's when things got tough and my wave assignment affected me. I caught up with the tail of Wave 1, and suddenly found myself dodging walkers and slower runners, some of whom were running side-by-side like a slowly-moving roadblock. I think this really took its toll over time, and the 59th Street Bridge was the toughest part of it. So many obstacles to dodge, and by the time I made it over, I was really looking forward to a push up 1st Avenue.

Still on my pace, 1st Avenue was a turning point. I saw my friend Joe taking photographs, which was also really cool. Beyond that, though, 1st felt like a long, gradual climb and I really started to tire. Those winds did not abate, and I found myself fighting really, really hard to keep my pace. I naturally fell off of it, partly due to wind, but partly again due to the pace of the runners around me. "If only I had been in the correct corral!", I told myself. Shortly after we entered the Bronx and I saw my average pace dip below 7:26 did I bittersweetly bid adieu to my BQ aspirations. I convinced myself to keep up the fight and see if I could keep it under 3:30, using whatever steady pace I could sustain and by NOT walking.

After what seemed like an eternity, we finally entered Central Park and I mentally dug deep to keep those legs moving. A slurp of Gatorade every mile helped, and the crowds started to thicken here, too. Then, an uphill tenth of a mile to the finish, and I was done! Secondary goal accomplished, finishing in 3:27:10. I smiled, and shuffled with the other runners towards our medals and water. 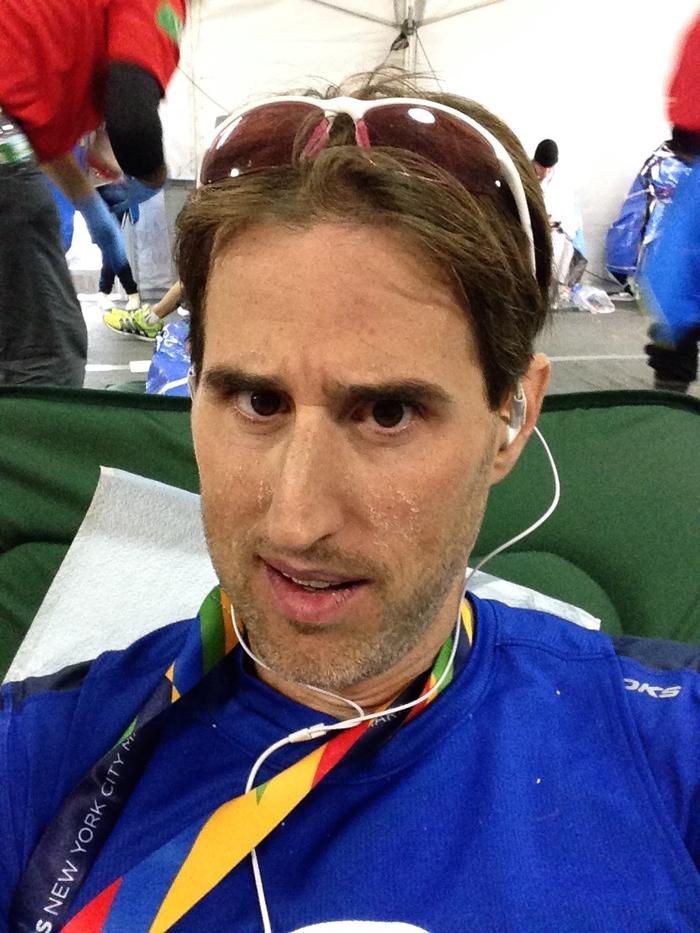 Post-race, in the medical tent.

This post-race walk was in some ways HARDER than the marathon itself. It was an eternity before I arrived at the tables where they were distributing bags of water/apple/gatorade and space blankets. I was feeling light-headed and my legs were killing me, and so I sat on the side of the fencing. Red Cross was on me right away, asking if I needed help. "No, but thank you. I just need to sit down." They pointed to a white tent in the distance. "Can you get up and walk over there? You can't sit here." Sure, I said. I think so. When I got to the tent, a sign told me it was the medical tent. I didn't need medical attention! Another 50 feet past the entrance, I turned back and found a volunteer because yes, I did need medical attention. They ushered me into a very well-organized medical tent with tons of staff, cots and provisions. Before I knew it was I lying down, feet elevated, with saltines, Gatorade, and a very nice man who was doing delightful things to my calves. They took such good care of me, and after about ten minutes I was on my (happier) way.

After the warmth of the medical tent, that space blanket might as well have not been there. My teeth were chattering, and as I exited the park, I had forgotten that one of the perks of not checking baggage at the start was getting a finisher "poncho". They put this around hooded luxury on me just a few blocks South of my exit on Central Park West, and I've never felt so grateful. We did all look like blue-clad zombies, shuffling off to wherever we had agreed to meet friends and family. Our meeting place was a pizza joint on Amsterdam, which I quickly found and was reunited with Amy and the kids. They had a great day spectating, and we couldn't wait to tell each other all of our stories!

I wouldn't have been able to do this without the support of my family. Amy and the kids were so great, both with supporting my training and coming to cheer me on race day. I love you all! Amy wrote a great post about her spectating experience, and here are some pictures of them cheering me on in Brooklyn! 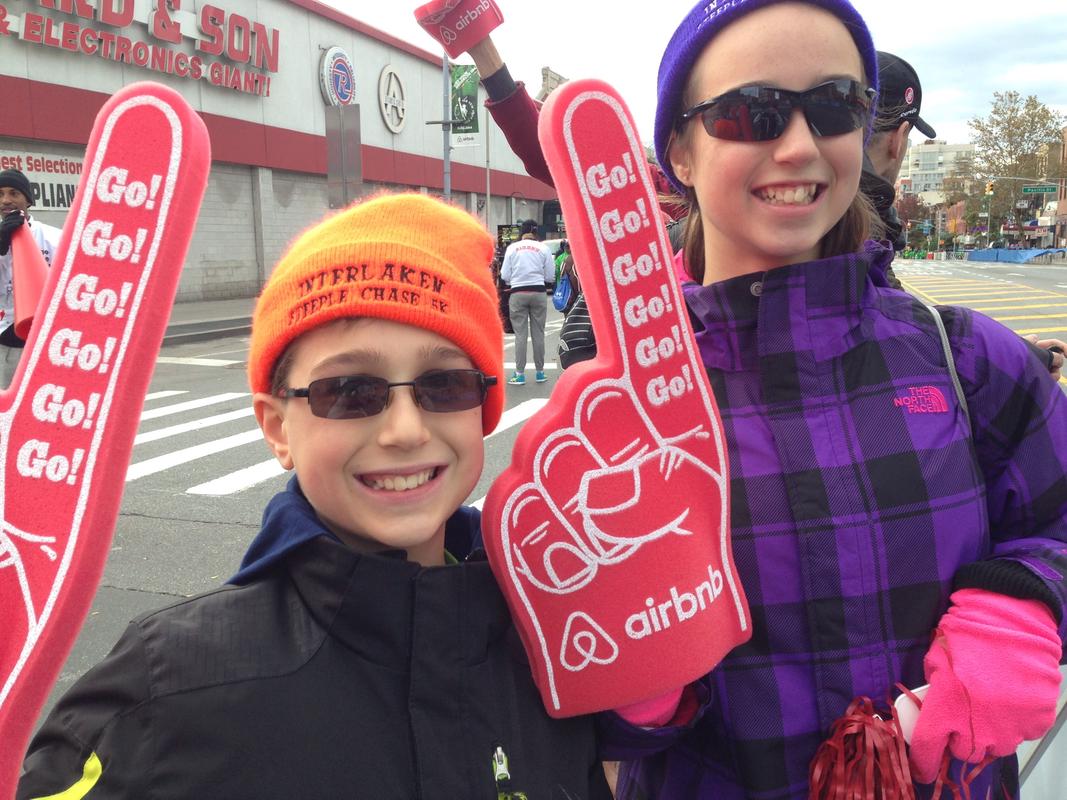 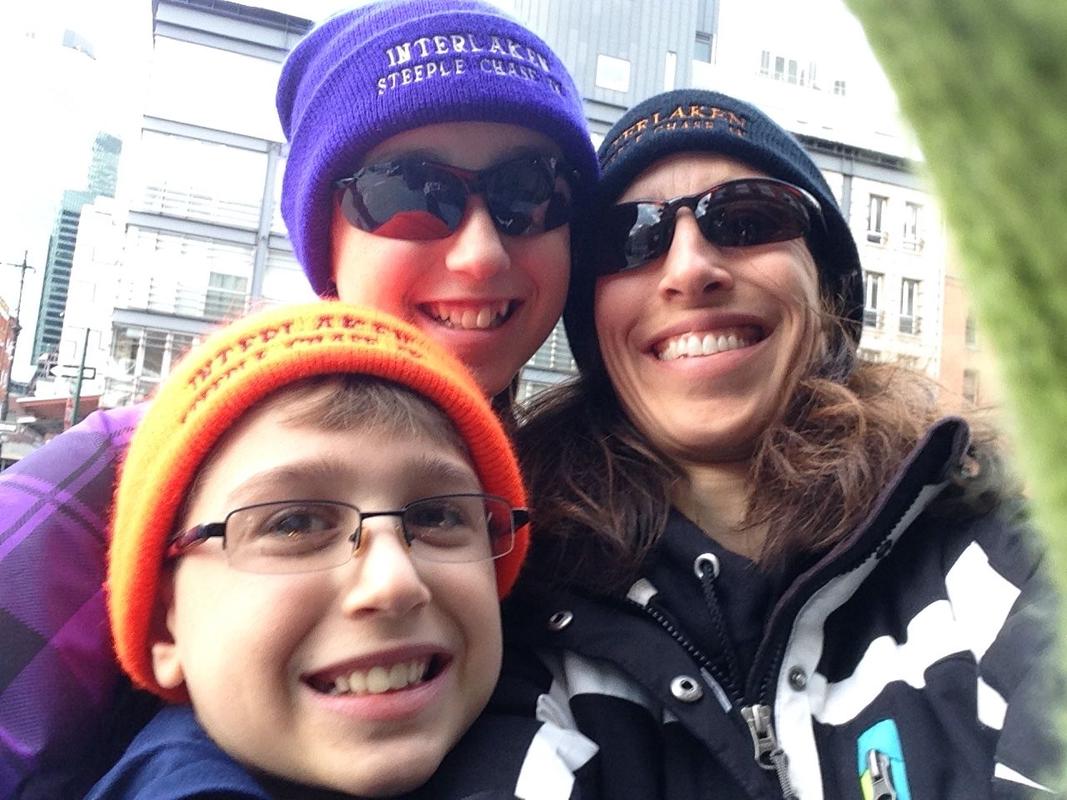 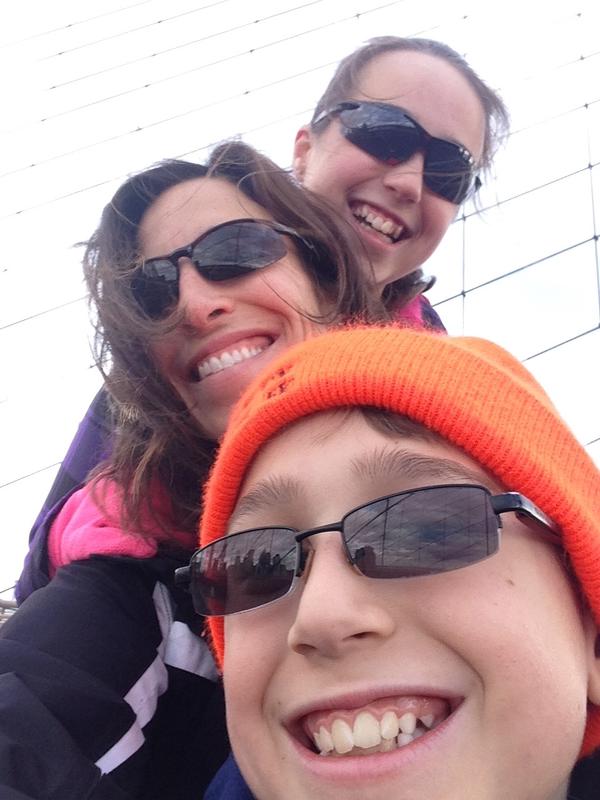 With a 3:27:10, my prior (and only other) marathon result was crushed, a 4:42:00 in the Rochester Marathon in Sept 2012. I was coming off an IT injury that shortened my training cycle, so finished that marathon in pain, both physically and emotionally. I'm really happy with this performance, but am super psyched to hit trail running again in the Spring!