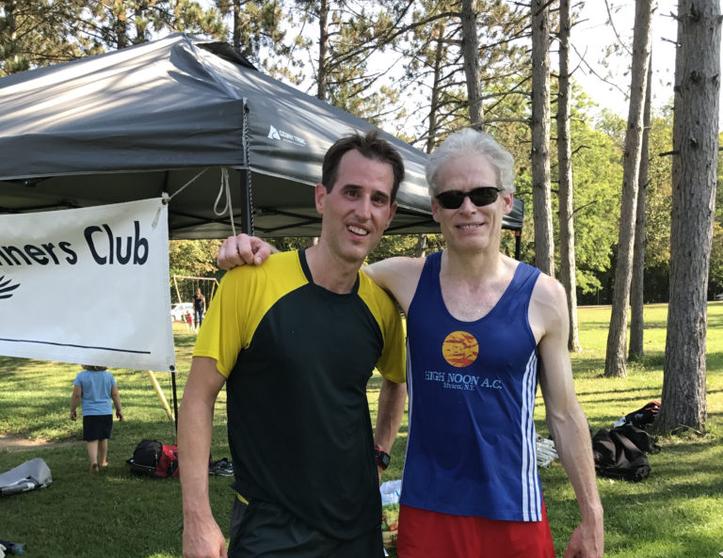 All grass course on fields, a couple uphills to make it honest and maybe soggy part so you can get some mud on the back of your shorts.

Summer came back in mid-September, so it was no surprise that this race fell on a 90-degree day. Amy and I enjoyed the drive to Akron Falls County Park. Despite being the longest distance from our home, the thruway miles clicked by as we talked and had a packed breakfast. Our running friends had already set up the tent in a nice shady spot so we’d have some respite from the beating sun.

We picked up our running tags and also our PGXC series t-shirt. There had been a misprint this year, marking all shirts boldly with PGCX, which sounds more like a train line than a cross country series. The organizers had promised the shirts would be ready for the next race, and they were!

The other runners had already headed out on a preview loop, so I spent a few minutes stretching with Adam. We headed out solo to preview the first and third loops of the course. We had spectate the kids’ cross-country meet in Baldwinsville the prior day, so I told him something I’d realized when talking about PGXC with another race parent. There’s no drama in adult cross country! I’ve heard all kinds of stories from my kids of their teammates talking smack about each other, bragging unabashedly about what place they come in while hoisting their ribbons in the air, and forming exclusive cliques within the team. There’s simply no drama in adult cross country, at least as far as I’ve seen. We love to run, and we’re all there for the challenge and the fellowship. Adam smiled as I told him this analogy, and we finished our preview run glistening with sweat and grateful for the shade of the tent as we awaited the start. We had a brief discussion of the merits of shirts. I waffled on whether to wear one, knowing that I’d brought my very lightest Patagonia to wear. Adam said he wore a shirt mainly for protection from the sun. David Keifer talking about some research that showed wearing a shirt actually resulted in better performance than not. I decided to keep my shirt on, and also carry a collapsible handheld filled with Tailwind.

I had no particular strategy in mind for this race, except not going out too fast. The race organizer reminded us of the recent tragic news that a 9 year-old girl had been killed by a driver during XC practice in nearby Geneseo, our alma mater. We’d be running today for her, her family and her community. Yet again, I was reminded once more about how lucky I should feel that I can run. My childhood battle with osteomyelitis jumped to the front of my mind once more. Adam was off to my right. As we started running, I fell in beside him and kept pace for the first mile. As we came back near the start, I felt my pace falter and silently bid adieu to Adam. His second mile split was the same as his first, but mine was a minute slower. I clearly couldn't maintain that pace: I’d need another rabbit from the start if that were to be a viable strategy.

I also didn’t wear spikes this race, despite having practiced with them. During the preview, we noticed several road crossings that would be tough on spikes. That didn’t deter much of the field, though. As we crossed those hard surfaces, I heard plenty of the clickity-clack of spikes on asphalt. I secretly wished I’d been wearing them, but there were three races left to try them out. I gutted out the third loop, thinking of nothing but how frustrated I was to have slowed so much. I tried to sip periodically from my Tailwind, but my breathing was so labored it wasn’t worth it. I probably won’t carry again, even if it were hot for a future race. I’ve never been so grateful to finish, and instantly sought out shelter from the sun to regain my breath and composure. I walked back along the course to another shady spot and helped cheer in the rest of our teams. It was quite a sight to see the finish line area and the stream of runners walking back to the pavilion. We had all swaggered to the start line, full of energy, bravado and pep. Now, after just 20-30 minutes, we all walked as full participants in a zombie apocalypse, shoulders hunched awkwardly with each step as painful as the prior, cursing the mild uphill grade back to the pavilion. I joked with a teammate as I took in the sight: they should make the extras for the next zombie flick run a 5K before the shoot. It’d be rather authentic. 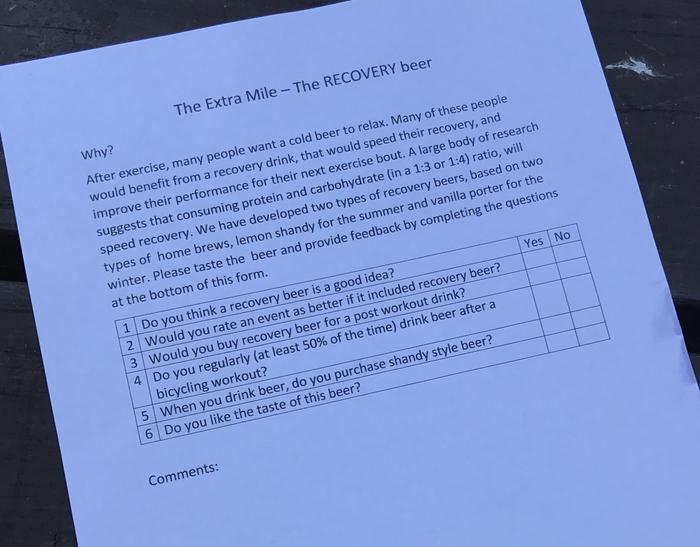 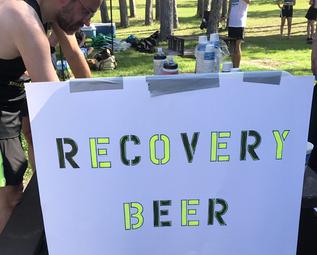 I enjoyed the post-race food and recovery beer, A few guys were trying out some home-brewed recovery beer on us, complete with a survey. We went on a short walk to Akron Falls to help our legs recover, but sadly the lack of rain meant there was barely a trickle of water coming down the stream. It was a pretty walk, but we didn’t make it to the waterfall. Awards would start soon, and there’d be more beer and chocolate that I didn’t win! I changed out of my sweaty clothing in the car and rejoined the group at the pavilion. Amy and I took a brief reroute on the way home to stop at Geneseo. We sat outside of Aunt Cookie’s and had a sub for a late lunch, followed by a stroll through campus. It is so different to go back so long after graduating. For some reason, everything looked so small to me. The buildings, green spaces and classrooms all looked tiny. Perhaps there’s something that age does to the brain, providing a new set point from which to compare your past. It’s a heady thought that’ll have to wait for now. It’s time to set my sights on a closer race two weeks from now: Watkins Glen!