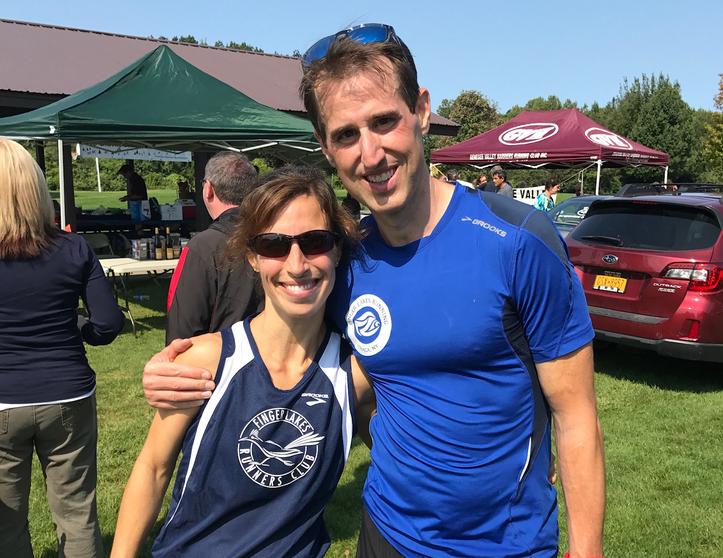 An all grass course on fields and paths, flat with maybe a roller or two which is perfect for getting used to the spikes after a summer of flip flops

The first race was upon me before I expected, having run a 50K at Green Lakes just a few weeks prior. All of my training to this point was for longer distances, so I simply put in maintenance miles leading up to this race. We carpooled up with Brenda Michaud. She’d done the AIDS Ride for Life 102-mile bike ride the day prior, so we had a great time catching up about that during the drive.

We got our bibs (well just, the tear tag from a traditional bib, kind of like what you wear in flag football) and spent some time setting up our tent and meeting each other. There were some new runners on the High Noon AC team I was on, including Columbia Warren. Columbia and I grew up together, and as adults see each other mostly at races. I thought it was cool that we would be running together again! We headed out for a loop on the 2-loop course to get our bearings and warm up. The day was getting hot, and I was already uncomfortable in the tight short-sleeved shirt I’d chosen. Adam Engst offered me a race singlet, but it didn’t fit too snugly. I decided to run shirtless, and though I was in the minority I’d be joined by two of my teammates looking for evaporative cooling as I ran.

The mass start (men and women, all age groups) was in the middle of a field along a white line. We were in the middle, with masses of runners off to our right and left. At the signal, I bolted across the field toward the first turn, running an irresponsibly fast pace (4:35) for someone who’d be running for about 20 minutes. I was the first runner to the turn where the path narrowed and we skirted a soccer pitch. I tried to settle into a good pace, knowing that as Adam Engst passed me I was succeeding at that goal. Adam’s a faster runner and should be finished before me.

The second loop turned into an endurance event for me. I focused on pace and not giving up any spots. In cross country, results are based on points, and points are based on the order in which you finish, not your time. Order matters! I picked off two runners as we rounded the last turn around a baseball field and approached the finish chute. As with the too-fast start, I really picked it up at the end, finishing with a sprint at 4:27 pace.

I was really happy to be a scoring runner for our team! There are a ton of fast people everywhere you look in this race, from 0-39 (open), 40-49 (masters), 50-59 (vets) and 60+ (supervets). Amy scored for her team, too, and I enjoyed hanging out with her after the race as we recovered our breath.

I surveyed the awards table. Wine, beer and chocolate. It looked delicious, but they had plenty of post-race fare for the runners. I devoured a banana, some Chex mix and a bar of something-or-other. The awards were fun to see: the Fingers Lakes Runners Club’s team won the Masters division! Our High Noon Masters nabbed second, but beer is for winners. I wondered if we’d win beer at one of the other four races? The GVH team is pretty fast. Individually I don’t think I’ll have a prayer either. I was 6th master with a time within the margin of error for my fastest 5K ever. I don’t think so. I will instead opt to run the fastest I can, aspiring to win beer and chocolate, but being content with the effort associated with a job well done.

The next race will be in two weeks. It is time to do some 5K-specific training! I’ve looked at Hal Higdon’s Advanced 5K plan, and it throws in some speedwork. Perfect! My daughter (who also runs cross-country) convinced me to buy some spikes. Amy had purchased some before the season started, and a lot of the High Noon runners had them. I’ll be wearing them at the next race!