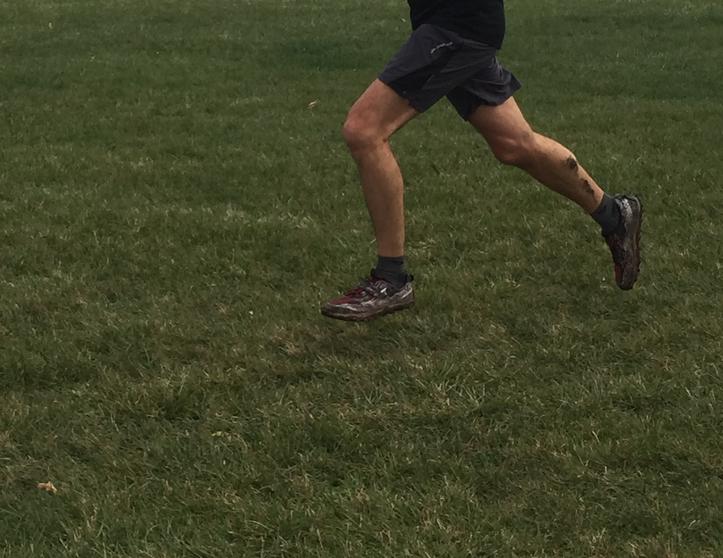 Fields, Hills, Trails … perfect. No wonder it was voted best XC course of the PGXC series

The last race of the series would also have the best weather for cross country running. It was dry, sunny and in the mid-40s. FLCC is close-ish to our house as compared with the other race venues, so we had a relaxing morning at home before heading out around 9. The women’s race started at 11, and I enjoyed cheering Amy and Elizabeth on while waiting for my 11:45 start time. Xander had come along to take pictures and video, too, which was super cool. I had debated whether or not to wear spikes. There is a 100-yard stretch of hard-packed gravel on this course, and we run up and down it. I chose to wear my trail shoes. Now, even post-race, I’m not sure what choice I would have made if I did it again. As we rolled through the first mile of the 8K (5 mile) course, I noticed the ground was soft and muddy in spots, which would have been perfect for spikes. I lost my footing around one particularly sharp turn, and almost ended up on my side. Gratefully I stayed vertical, passing Amy, Elizabeth and Xander shouting encouragement from a soccer field.

Xander got this great series of videos while spectating!

I pounded down the gravel incline, grateful to have shoes on for this stretch of hard, cobbly surface. We were entering an area of wooded trails, and my teammate Casey came up alongside. It was nice to run with him for awhile, and I enjoyed his encouragement. The leaf-covered wooded trails reminded me of running at Taughannock. I felt at home here, but it was short-lived. Soon we were heading back up that incline to the upper part of the course. I again passed my family shouting encouragement as I crested the hill, and I set my sights on a GVH runner who was just ahead of me. I passed him just around mile 4 and vowed to not get passed by him. I knew my pace was dropping off, and my mind started going other places now. I plan on taking some time off of running to reset, so I thought of that. We were about to go buy my son some new ski boots, since his feet keep growing, so I thought of that. I was coming up on that sharp muddy turn where I almost fell, so I thought of that. I realized I was thinking way too much, so ironically thought of that.

I gave all I had as I approached the finish. The GVH runner I had passed was far enough behind me, or so I thought. About 20 yards from the finish line, I sensed him right behind me. I turned my head to the left and saw him in my periphery. Could I go faster? I didn’t know. I turned the volume up to 10, so-to-speak, and started half sprinting and half-falling into the finish chute. DO NOT GIVE UP THE PLACE. The series director, Mike Nier, was here for this spectacle. I managed to stay upright and finish with my place intact. I paused just long enough to have my bib torn off, then walked a few more steps to put my hands on my legs and try to catch my breath. It was an all-out effort, and I was grateful to be done.