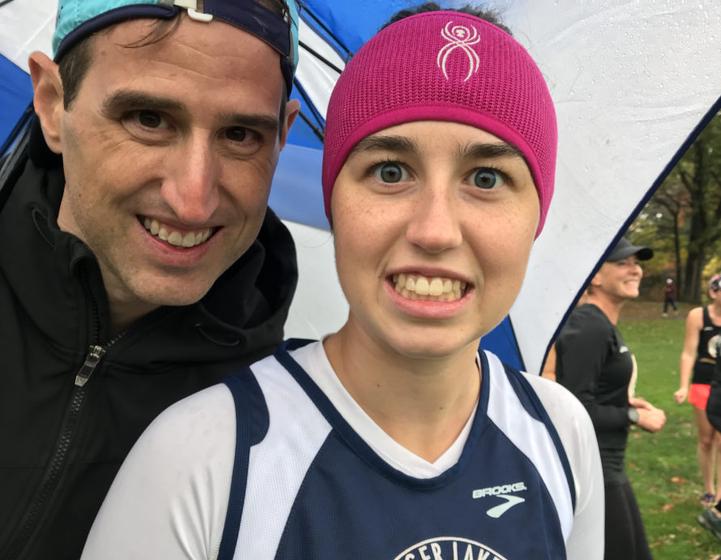 All grass fields, a sloping hill and one of the best spectator courses in Rochester, which is perfect to watch the other two races unfold for the Niagara championships bragging rights.

Compared to the balmy weather several weeks ago, this weekend made it clear that winter is on the way. The temperature hovered in the mid-40s, normally perfect for running, but the real issue was water. Lots of it. A weather system parked itself over Central New York and started dumping water the night before the race, and would continue to do so until the morning after the race. Elizabeth joined in for this race, too, rounding out the women’s open team for Finger Lakes Runner’s Club. Amy, Elizabeth and I enjoyed the drive to Rochester and found a decent parking spot near the pavilions that would keep us dry until race time.

The kids’ McQuaid cross country meet is held at this park as part of their school cross-country series. It was going to be fun to race it myself, and the course they’d set was advertised as three 2K loops. After watching the women start their race (men and women were separated today), I walked through the sopping field back to the pavilion to stow my umbrella and strip down into my shorts and singlet. I watched the remaining laps of the women’s race and warmed up a bit, running haphazard lines across the main field and periphery. 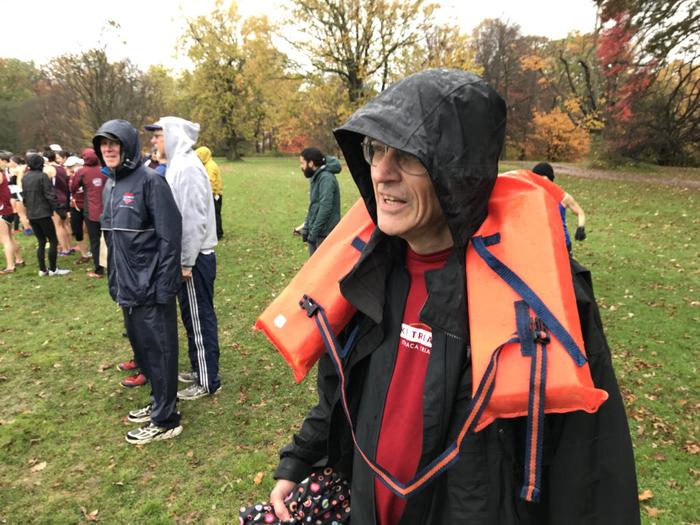 Carl Franck had all the right accessories

As we waited for the signal to start, an organizer shouted out that the course was starting to get muddy in places. This was hilarious, because the entire course was mud; it was just muddier at the turns. As we started the first loop, Adam came up next to me and warned “Slow down, Scott.” I turned to my right and said “Is that the voice of reason I hear over there?” I did slow down, but was grateful to get out in front of the mass of runners. The race itself flew by. Alex Colvin came alongside around mile 2 and I enjoyed pacing off of him for a bit. Casey Carlstrom reeled us in not far into mile 2 and we were a trio for a bit. Alex and Casey were both veteran runners who were “running down” into the masters team to give us a better chance at winning. They were fast! Adam had also recruited Scotie Jacobs, a local (fast) ultra runner, to join us. I hoped to hold on and finish in the top 5, given these roster changes. 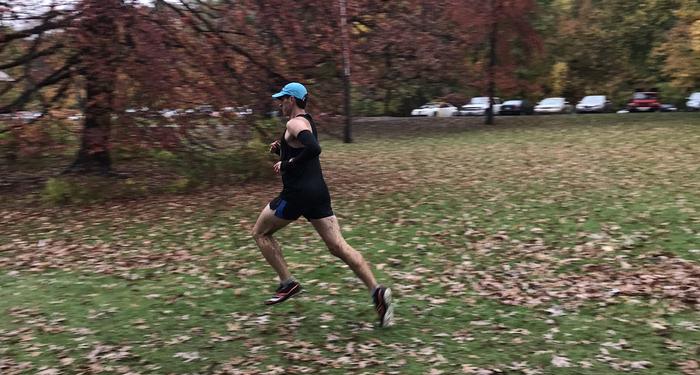 Elizabeth snagged this picture of me mid-race

As we started the third loop on the grassy infield, I wondered how much longer it’d be. I hadn’t studied the course closely, but I knew we had to do “three loops.” I was shocked when the guys in front of me peeled off toward the finish! Shocked, and grateful. I was so ready to be done! I had been focusing on not letting the GVH runner behind me pass on the last loop, and had thought I had to go up a hill toward our pavilion one more time. Just as I was focusing on that challenge, the race was over. I didn’t give up a single place over the one-hundred yard dash to the finish, though I would have liked to have kicked sooner. There’s always next year! 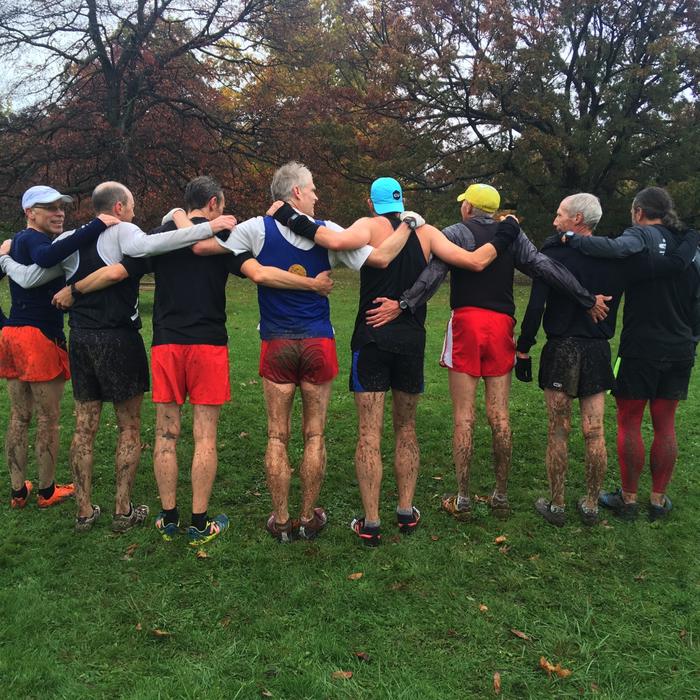 A bit muddy after the race

The results for our men’s masters team were good, though we didn’t find out ‘til later. Dry clothes and the promise of warm coffee won the day, and we were soon headed home after getting a group picture of our clean fronts and muddy backs. We were so disappointed to learn that Starbucks had closed for renovations in Canandaigua, though! We dejectedly drove by, seeing construction workers outside and a sign in the window. Why, caffeine gods, why?

I was thrilled to know how we’d done as a team when Adam wrote later that evening. Our High Noon masters team eked out a victory over GVH with a 34 point tie that was broken by Sean Nicholson’s 6th man tie-breaker. Adam’s strategy of stacking the masters team in favor of diluting our strength across a weaker veterans and masters teams paid off! The performance netted us our second case of beer for the season. Personally, I ran my fastest 6K race of the season. My average pace was only bested by the first race in the series, though that was a 5K. Two more weeks of training, and we’ll toe the line at the last race of the season! 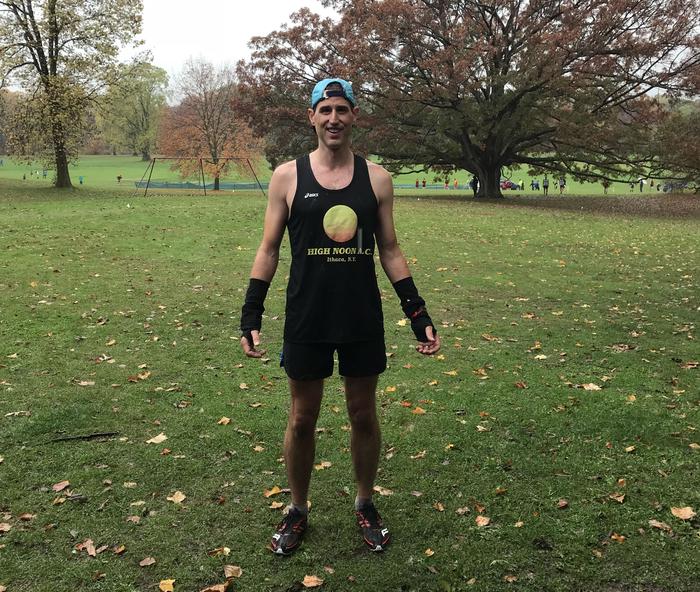 Done! ... and ready for dry clothing