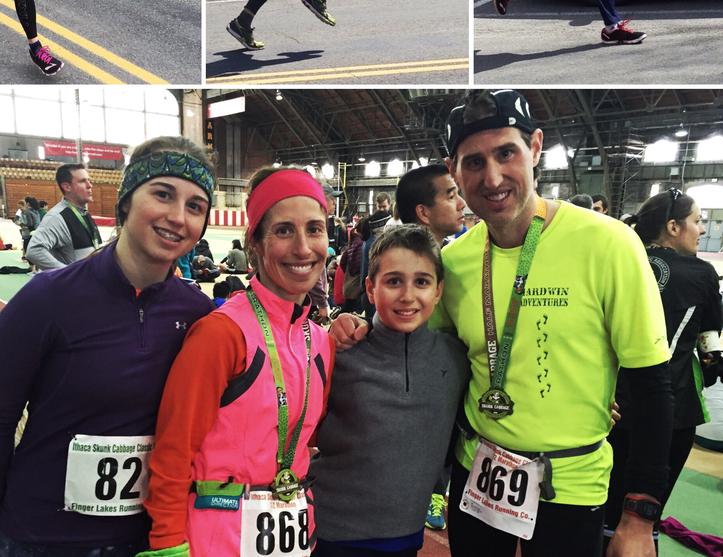 Just a week after the "Syracrazy" half marathon in Syracuse, we had all signed up to run Skunk Cabbage as a family! The kids were tackling the 10K, while Amy and I opted for the half marathon. I was grateful for quick recovery from Syracuse, as my hamstrings loosened up just after a few days and some good stretching and rolling at home.

We had a full day in store, with the race followed by acting rehearsals for the boys and baking for Amy. We dropped a car off at Island so we'd have two vehicles in Ithaca, and arrived at Barton Hall a comfortable half hour before the half marathon started at 10. It was nice catching up with running friends while we all kept warm inside. It was like a spring-time reunion, though the start temperature was a non-balmy 28 degrees. We all thronged to the start line just before 10, so the race held a few minutes to allow everyone to get into place. The kids would keep warm until their start time at 10:15. I lined up next to Ellie Pell at the start (though that would be the only time I'd see her; she'd go on to set a course record and win 1st female) and we exchanged a few encouraging words before we were off.

It was such a refreshing change from last week. I was wearing Brooks PureFlows, enjoying the dry pavement and the corresponding traction, and the lightness of the shoe. I set off just under a 7 minute mile, and tried to keep it steady through the first 5+ miles of moderate climbing. After a few miles, I started running with Gerrit Van Loon, whose endurance is remarkable both in road races and ultras. We chatted sporadically, but mostly spurred each other on through the latter miles.

It seemed far warmer than I thought it would be. The gloves came off first after a few miles, then about halfway through I lost the arm warmers. It was an odd feeling to be running in thermal tights and a light tech shirt, but it worked out just fine, and my temperature never really got uncomfortable. Well, at least until I stopped running at the end ... then I was FREEZING! 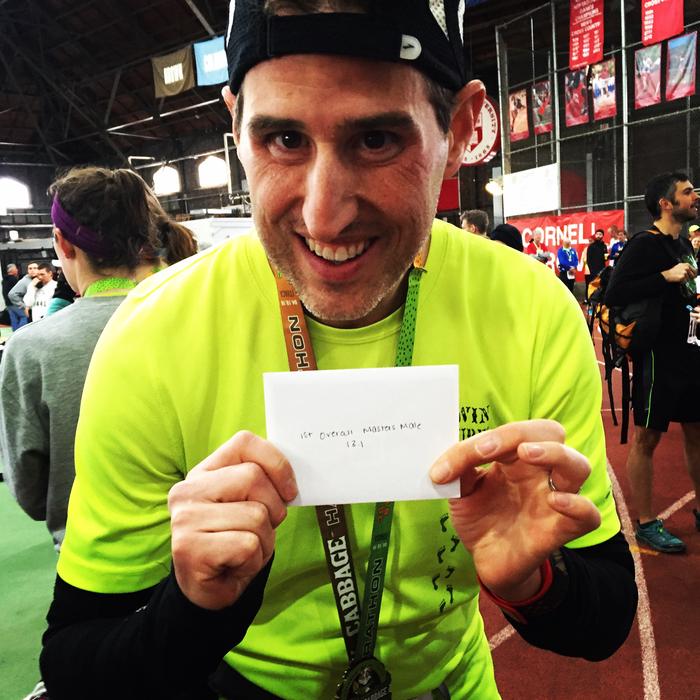 The last four miles, while flat and moderately downhill, were really where I had to focus on my pace. Someone who looked close to my age (he was 38) was on my heels, and I had kicked a bit to get ahead. Keeping my head engaged, despite the physical discomfort, worked wonders in this case. With the downhill assist, I negative split these miles at 7:03, 6:54, 6:39, 6:22 and a final tenth sprint at 5:14. I was so grateful to cross the line, and EXACTLY at 1:30:00. I tried really hard to sprint it out at the end so there'd be no seconds beyond 1:30, and I wasn't sure if I'd done that until they posted the results. While looking at the results, although I didn't set a course PR for myself, I found out that I was the masters winner! There were three veteran (50-59) winners that finished before me, so I have a feeling my fastest days are in front of me!

Elizabeth had a great race, getting third place in her (huge) age group of 20 and under, and Xander ran his first solo 10K, with nobody to pace him. They both had great times, and they enjoyed the post-race socializing just as much as we did. The thing I love about racing as a family is the stories we all have to tell. They came out during our dinner and breakfast conversation the next day, and I'm sure there'll be more. There are no action photos of Elizabeth running since she was the first to finish and became our unofficial photographer, so we can't wait to see the ever talented Steve Gallow's photographs of the event when they're ready!