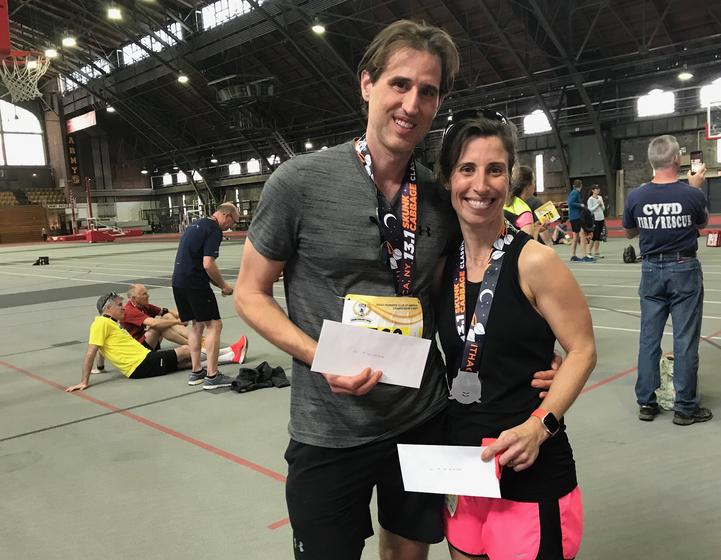 April 7 snuck up on me very quickly this year. I had good intentions for some strong winter training, but it just wasn’t in the cards.

My mother-in-law was diagnosed with cancer a few days after Christmas. Much of the following weeks were an emotional roller coaster, but she’s now in treatment and doing well. Weeks later, we had to make the gut-wrenching decision to say goodbye to Snowball, our family rabbit and my office companion. Within six days, we adopted Phoebe from the SPCA and she wasted no time trying to chew most things in the office. This rabbit took a liking to our couch, resulting in a lot of angst and a struggle over whether we should keep her (we did). Amy was recovering from a stress fracture in her toe and not running much. As if the personal stress wasn’t enough, I had a management change at work! I had several trips to New York as a result.

Given that preamble, it’s understandable why we didn’t get to the MITHACAL Milers workouts, or why I didn’t follow a training plan for this race. It just wasn’t anywhere near the top of my priority list. Despite the tumultuous winter, I did remain active: I skied, did weekly BodyPump, and had a modest load of 15-25 outdoor running miles (mostly toward the lower end of that range).

The weeks preceding the race were really busy for the family. Xander was fresh off a run of shows for his high school production of Addams Family. As a bonus, Amy and I had learned at the last minute how to apply a theatrical bald cap! Xander’s last matinee performance of Alice in Wonderland Jr. preventing him from running the 10K race as planned. Elizabeth needed to bake for Emoticakes, too, so she stayed back home. With both kids out of pocket, it was up to Amy and me to kick of the spring racing season for the family!

We arrived a little more than a half hour before race time. The bib line was rather short. We pinned the bibs on ourselves and had time to talk to a lot of our friends as we waited for the race to start. We both took last-minute trips to the bathroom, too: I was really nervous despite having a goal of just “running well.”

I found a spot near the front of the pack at the start line and looked up the short hill that we’d run up before turning to the left. It was beautiful out: low 60s, sunny, and a rather sharp contrast to the cold and snow at this race last year. I set an intention to not look at my watch too much. I read somewhere recently that just looking at your watch could lose you a bunch of time. I chose to just enjoy the run! I carried my own Nathan flask of water so I wouldn’t have to stop at any of the aid stations.

My brain was busy as I raced. Myriad emotions and thoughts revealed a bit of my personality as they flitted in and out of my consciousness. As I passed people, got passed, and endured long miles by myself, I alternatingly thought: You suck. You’re awesome! You’re going too slow. You’re going too fast! You should walk. Try to pick it up a little, will you?

I felt whipped when I got to the course’s final ascent. I powered up the hill the best I could and enjoyed the respite of several downhill-ish miles back to the finish. As I approached the finish line I saw the clock ticking up towards 1:32. I powered my legs enough to cross just before the clock flipped to the next minute, finishing in 1:31:55. The time was right in the sweet spot of my usual half marathon times (see 2016, the Year of the Half Marathon) but would turn out to be my slowest performance on this course.

Bagels with cream cheese never tasted so good. After Amy finished, we enjoyed more time with friends over post-race food. Soon it was time for awards! After the first and second masters winners were removed from our respective age groups, Amy and I walked away with the 45-59 age group wins for males and females. We held up our winnings for the photo at the top of this post (FLTRC gift cards to help defray the cost of new shoes!)

My tiredness caught up with me at home. Content with the post-race food as a stand-in for lunch, I made the mistake of lying down in my bed. I promptly fell asleep and napped for awhile. Amy and I have been doing a weight training program called 5x5, so I banged out a workout in our home gym after I woke. We had planned a yoga date for later in the afternoon at Pure Sweat in Ithaca. Bikram yoga turned out to be the perfect prescription for tight muscles. After 90 minutes in the hot room, we were sufficiently stretched and avoided post-race muscle soreness. There’s something to be said for not having to hobble down the stairs the day after a race!

With Xander’s matinee performance over, the kids picked us up from yoga and we enjoyed a fabulous dinner out at Viva Taqueria. Our favorite waiter Scott got us a table promptly. Post-race replenishing never tasted so good! 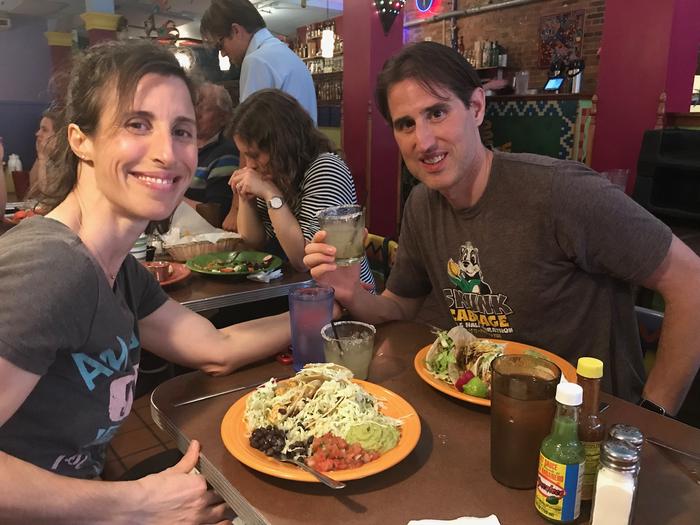