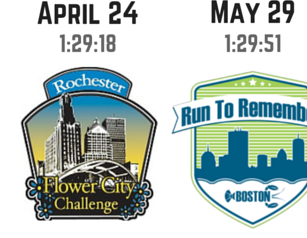 After gutting out my first 50-miler last year and paying for it until the snow flew in winter, I felt I needed to switch things up, so I declared 2016 my "year of the half marathon." I signed up for 5 that would work with my schedule, and started training from January onwards. It really is the half year of the half marathon, now that we're in July and they're all done, but it's catchy either way. I'm in triathlon training now and then marathon training for Corning Wineglass, but here's a fun recap of what made these races, and by extension the first half of the year, fun! I never came close to my half marathon PR (maybe in the future, but I think that's optimistic), but adjusting for weather and elevation, I had pretty consistent results that I was happy with.

What's next? Well, next year I may have another go at the Cayuga Trails 50. I know I can do better than I did with smarter training and nutrition. We'll see ...