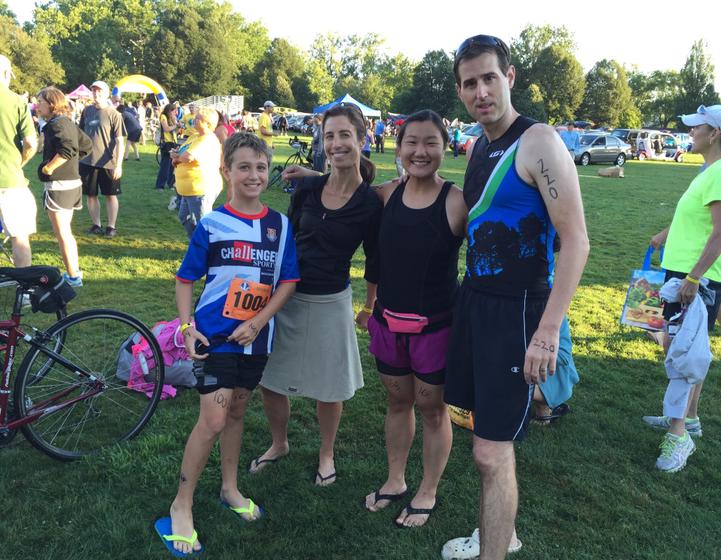 This year was my fifth sprint distance triathlon at the Cayuga Lake Triathlon. It's SO nice that it is practically in my backyard, as the logistics are so much easier. It always strikes me how much gear I need to get together and organized before the race. The sprint distance is a 750 meter swim, 14 mile bike, and a 5K run. It was a beautiful morning for a race, but probably just a touch too warm to nab some personal records. The energy of the community around this race is always so infectious, I think I walked around with a smile all morning!

Mom and Dad helped again this year with body marking, and we got some nice pre-race pictures with them. Xander also did his first triathlon - the Cayuga Lake Triathlon youth distance - and got to enjoy the full body marking experience, too! Ray and Diana were great cheerleaders along with my parents, as they all took up spots near the swim start to see us go in, and come out of, the water. 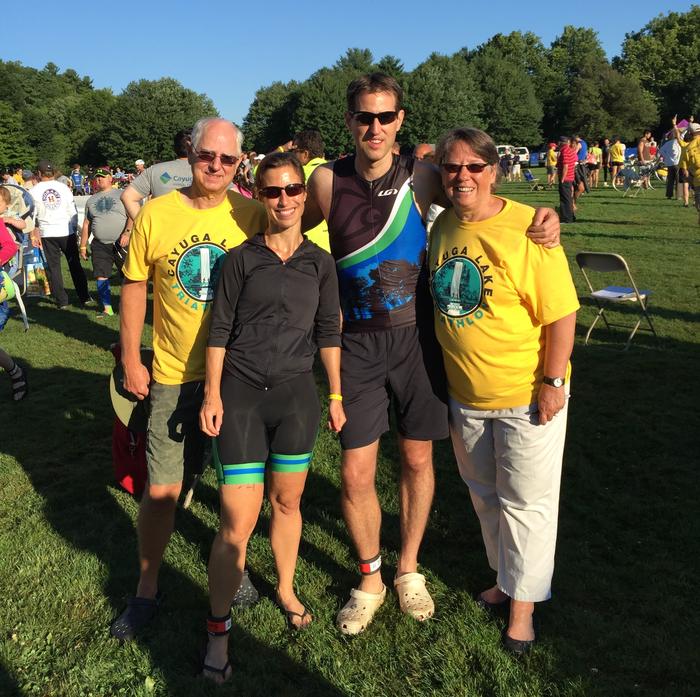 Mom and Dad helped with body marking again this year

As I waited for my 9:00 swim start, I noticed with some trepidation the choppiness of the water. The wind also made a huge arc in the buoy line we were to follow, and I watched some of the smart intermediate swimmers create a tangent straight to the turnaround point. Really smart. Less distance to travel, that way. This was my first year wearing a wetsuit, and I was grateful to have had the chance to practice with it, albeit not as much as Amy. With the production of The Music Man I was in, work demands and an untimely summer cold all hitting at once, I wished I had more opportunity to practice. I did a few laps in the warmup area, noting that the water, for the first time, felt quite comfortable. It was 72 degrees, and with the wetsuit I had none of the goosebumps or teeth chattering I've had in prior years. 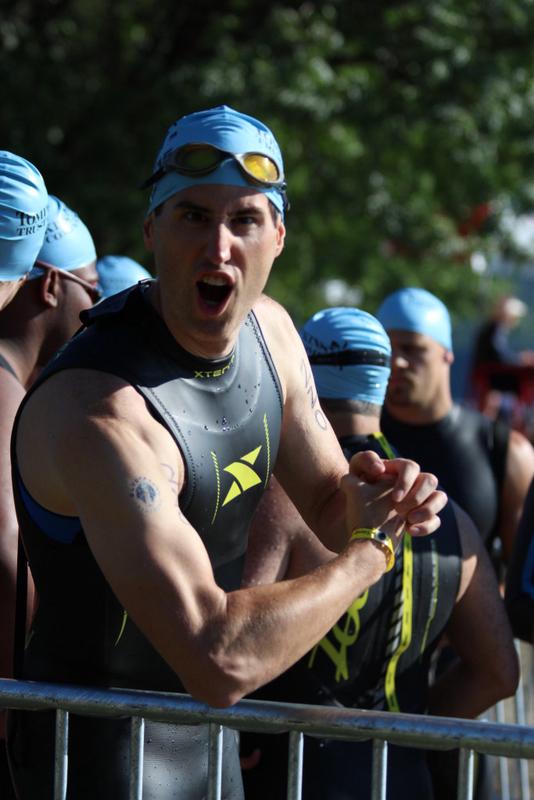 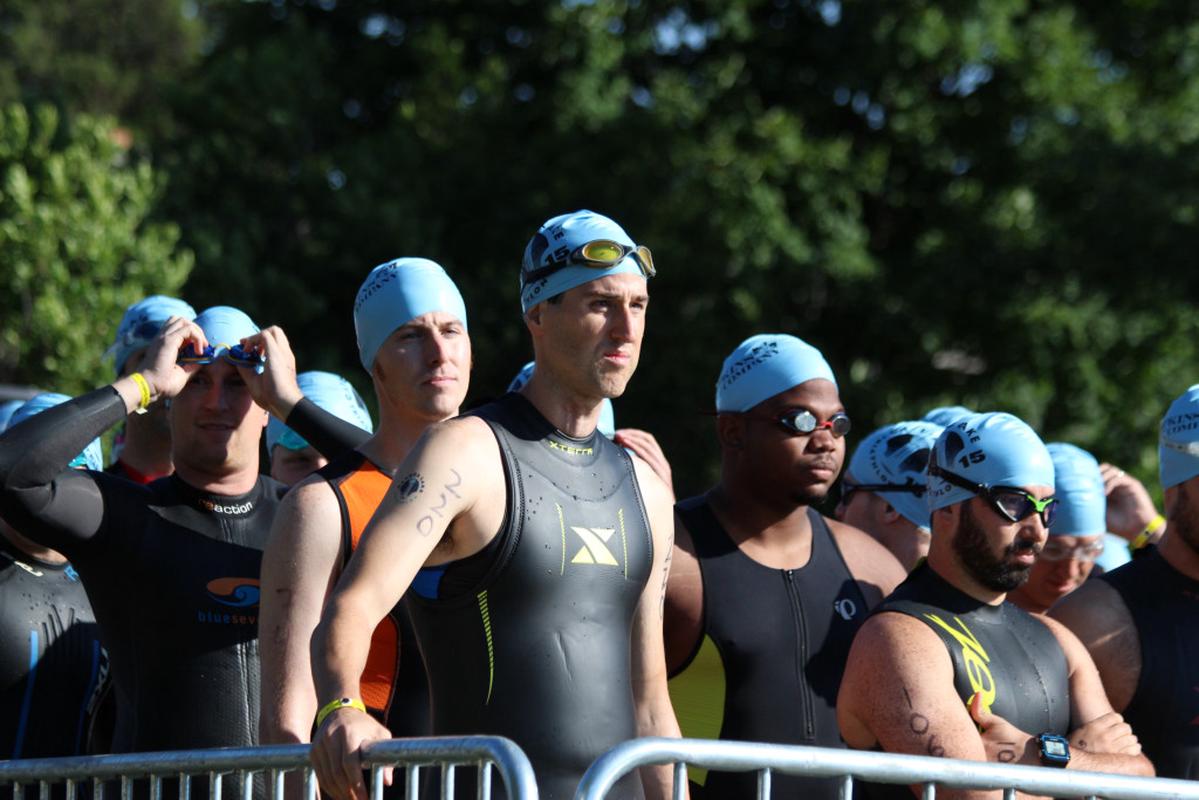 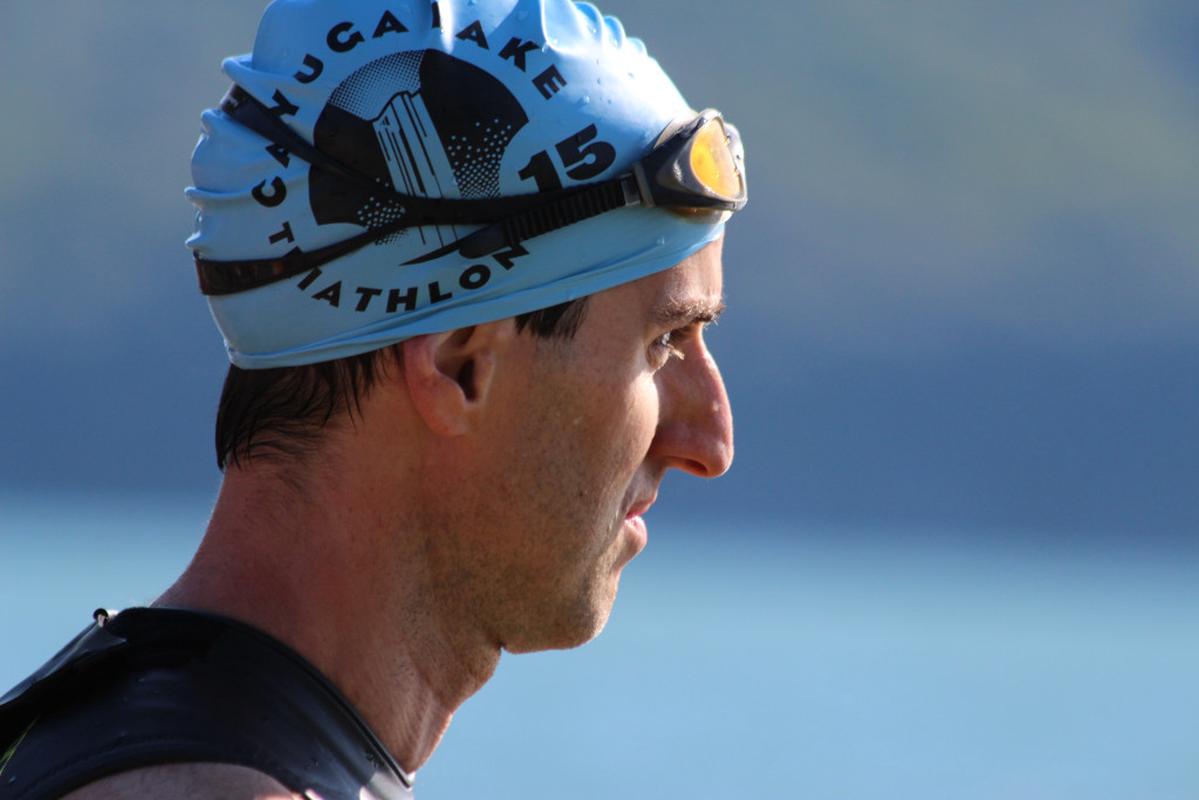 My wave was men 44 and younger, which made me quite nervous. I was near the top of that bracket at 42, and some of the younger guys (and sure, older!) would be far faster than me. I tried to figure out if I should line up in the back, on the side, or somewhere else to have a smoother start, but decided that NOT making a decision was the best course of action. So, it was no surprise when I found myself toeing the proverbial line, right up front. I could push hard, get out of the fray quickly, and enjoy the swim. 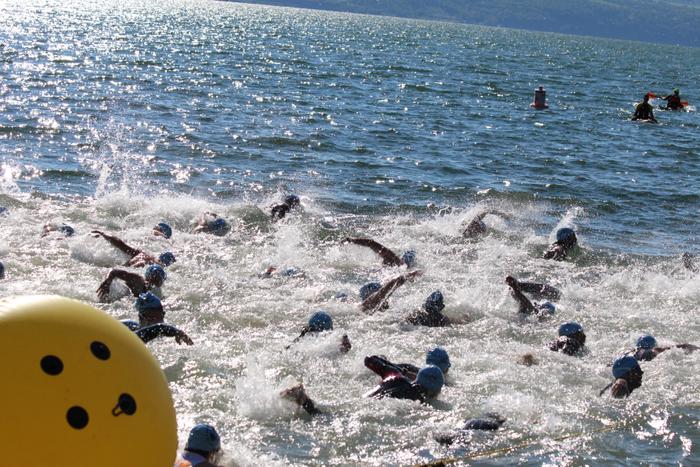 The herd. I'm in there somewhere!

Right. When we went off, I tried to sight straight to that last buoy. With the waves crashing and arms flying to my right and left, the effort was futile, though. I had started 25 feet to the left of the buoy line, and just a few minutes into the swim, the herd had pushed me all the way INTO the line. My right hand came down on the yellow rope, surprising me! I realized I was in this position for the long haul. No way to get left without getting trampled, my feet were getting brushed by the guy behind me, and the guy in front of me was going slightly slower than my pace. Oh no! I felt like a car on the Mass Pike, boxed in by semi trucks. 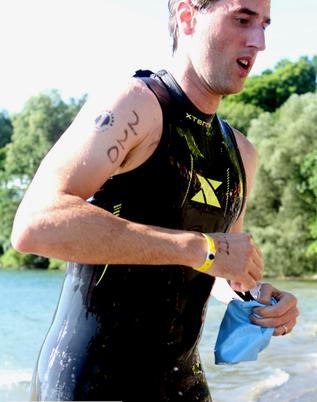 There was a blessed break in the logjam a few minutes later, and I seized the opportunity to jump left and pass the guy in front of me. I ended up passing 2 more people on the stretch to the turnaround buoy, which gave me a much-needed boost. The way back was SO nice. The waves were now at my back, and I got into such a good rhythm. At times I felt the surge of some of the bigger waves push me like a body surfer, and it felt so good.

Before I knew it I was back at the beach, high-stepping my legs and starting to unzip my suit. After a quick jaunt across the pavement to transition, I was on my way to the bike. 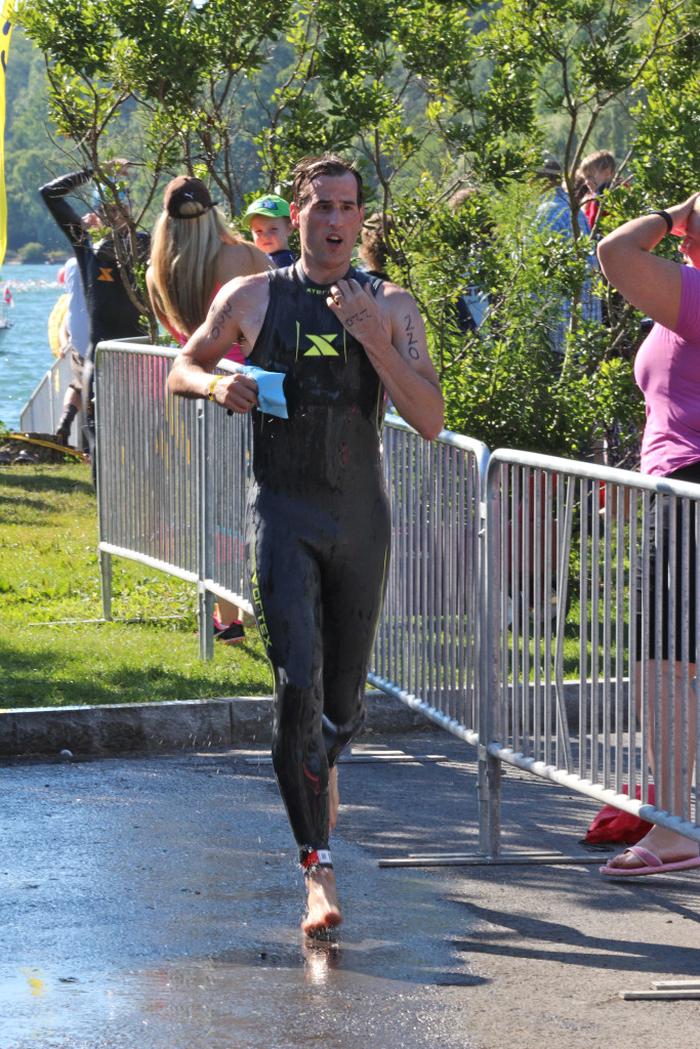 I love this bike ride. The climb, while intimidating, is over quickly enough, and I got onto my large gears quickly for the rolling grade to the turnaround point. It was uneventful enough, as I had plenty of breath in me and no muscle issues or cramping. I was intent on maximizing my pace, and enjoyed bombing down the last pitch back into the park. Strava tells me that I hit my top speed of 38.3 mi/h as I came to the bottom of the hill. What a THRILL! Average speed of the ride was 19.3 mi/h. 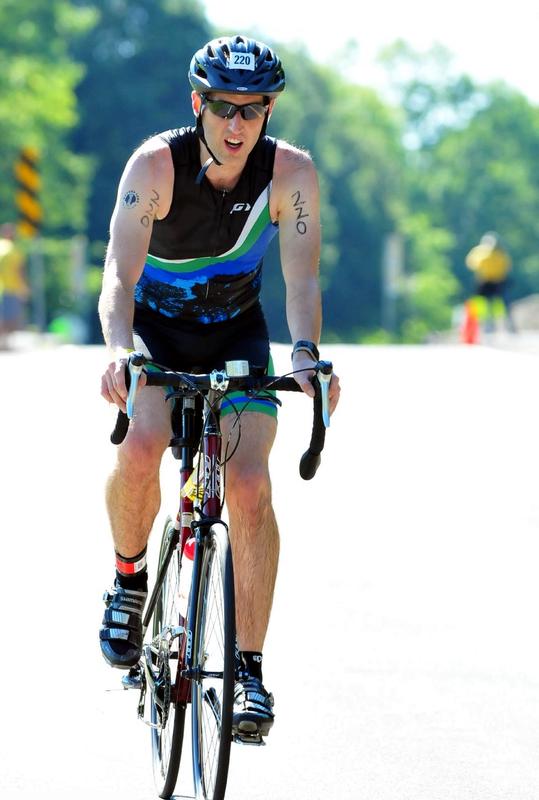 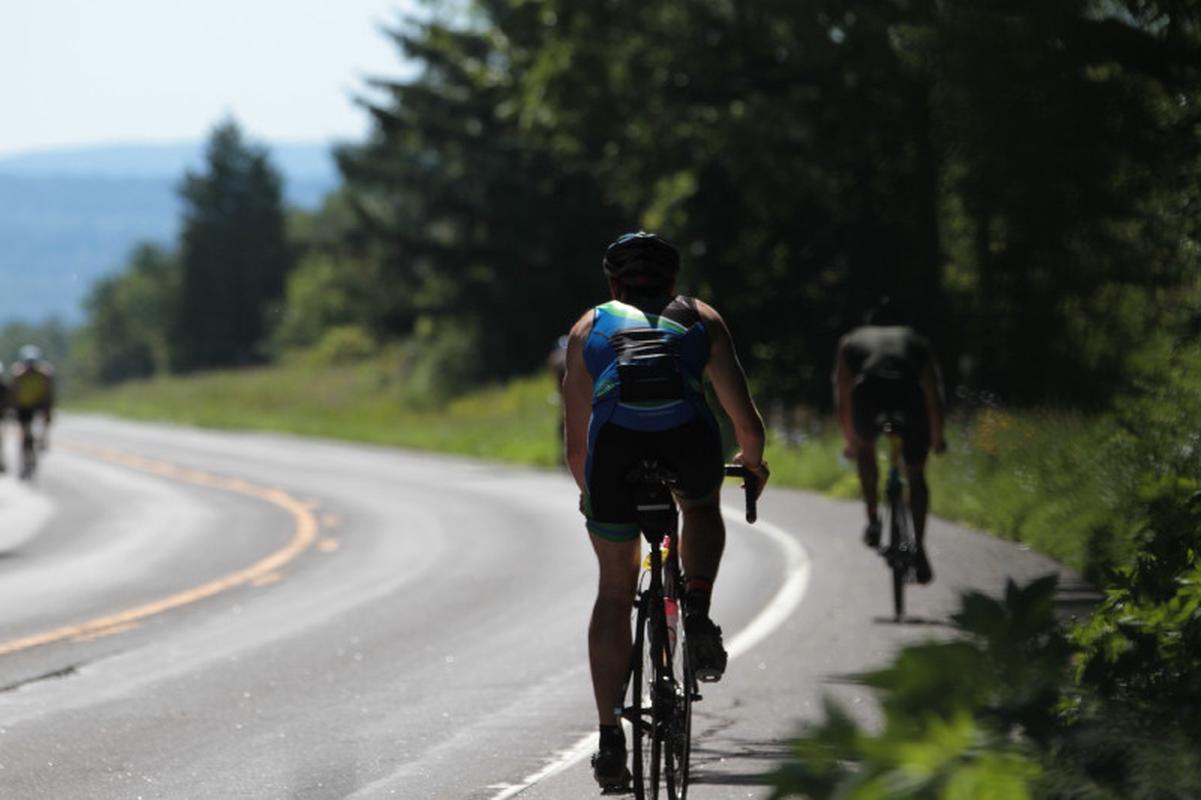 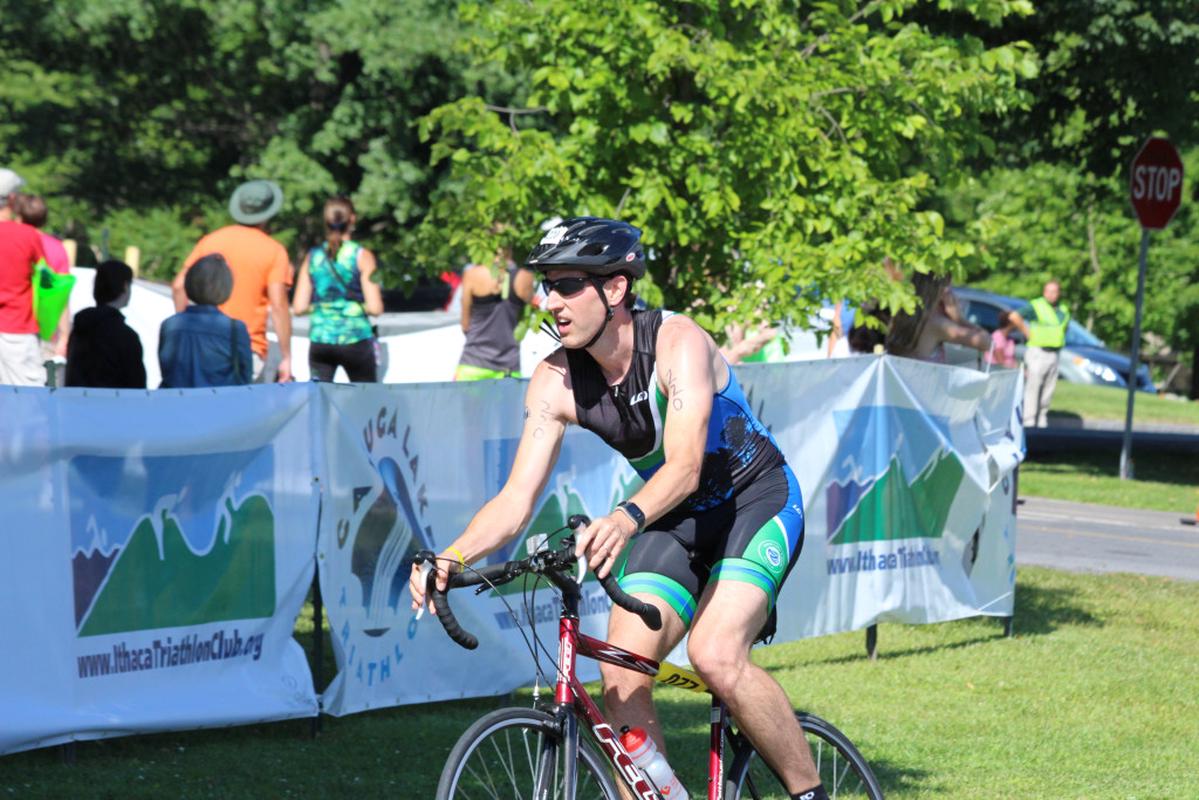 After finishing the bike, I started the run. It's always a challenge to get my running muscles to engage, but this year it didn't take too long. I set a good pace around the park, under the bridge and onto the base trail. Taughannock's trails are like home to me, and I smiled as I ascended the brief pitch to the familiar trail, remembering running there in the snow, the rain, and the sun earlier this year. Taughannock has many faces, and I've seen a lot of them. I shouted kudos to runners coming back my way, turned around at the falls and enjoyed the last half of the run. Before I knew it I was back to the finish, crossing in just under an hour and a half. Xander had just started his swim, so after a big drink from my new water bottle (what a great idea, handing out full "finisher" water bottles at the finish!) I headed over to see how he was doing. 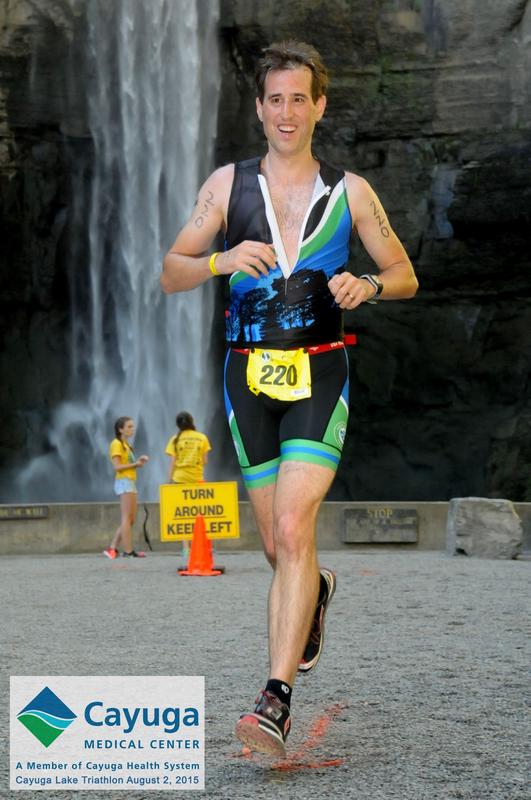 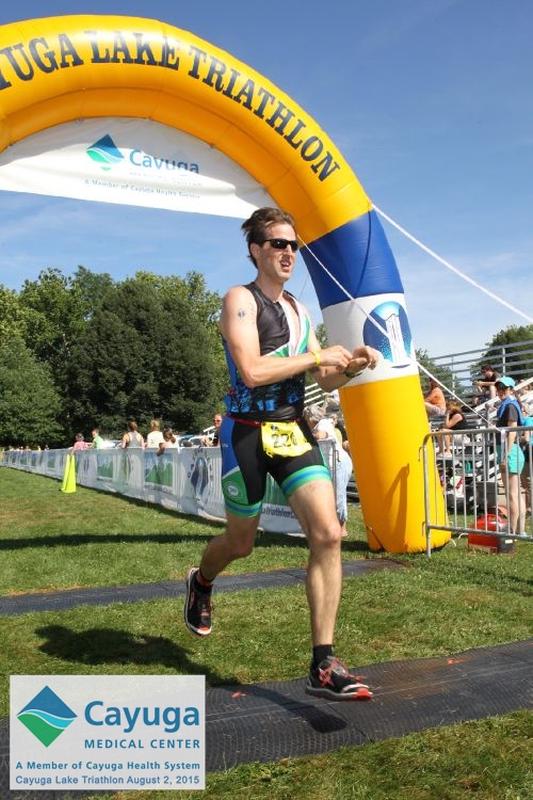 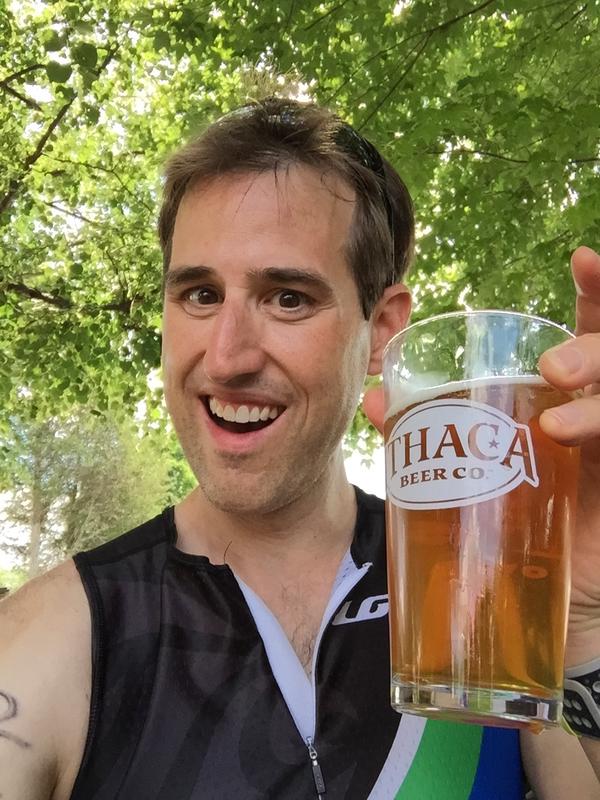 We enjoyed the post-race festivities, including a complimentary beer from Ithaca Beer and a delicious box lunch from Wegmans. The organizers, volunteers and community all pull together so nicely to make Cayuga Lake Triathlon one o the highlights of the year! Sadly we boys couldn't linger longer, since we had to head up for a 1 p.m. call time for The Music Man, but we had our fun and REALLY enjoyed the morning!

Cayuga Lake Triathlon: By the Numbers

My swim time was a nice improvement over last year, for which I'll credit my wetsuit. The conditions were poorer, so compensating for that, I think I was definitely faster. It's funny, though, my fastest swim was my first, in 2008. Ah, youth. That, and a glassy surface, Amy reminded me. I'm looking forward to taking Total Immersion with Shane at Island Health & Fitness this fall, as it is sure to make me a better swimmer in all conditions!

Compared to Other Years: Sprint Distance

Next year, both Amy (read her report from this year, too!) and I think we're ready to step up to the intermediate (Olympic) distance. It's a 1.5K swim, 24.3 mile bike, and a 10K run, so double in everything except the bike. I'm looking forward to the extra challenge! A very special thank-you to my Dad and Stevan Knapp for the great pictures! A few are from the event photographers, but most are from my Dad, and a Steven took some great bike shots. Thank you! 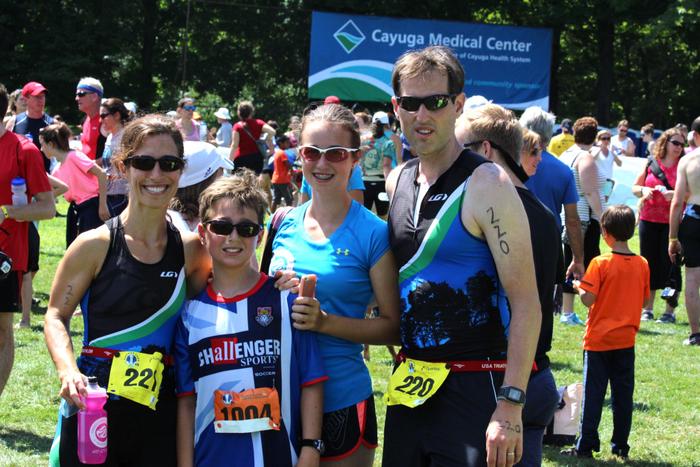