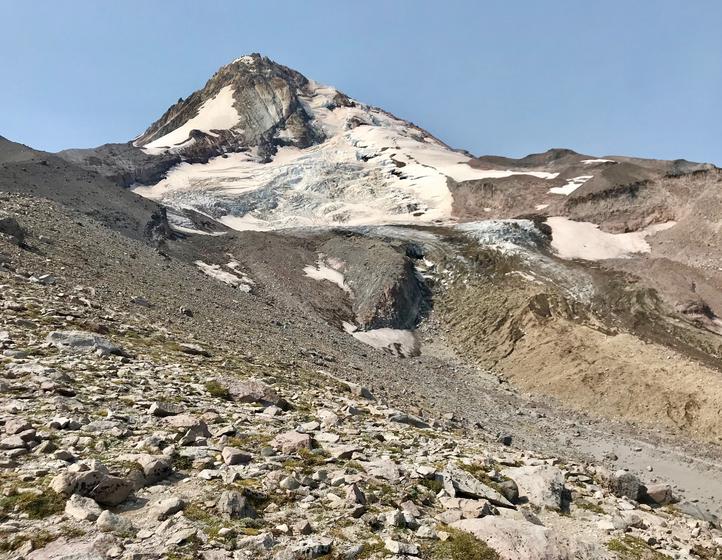 It’s a 12-mile drive up the access road to Cloud Cap on the eastern flanks of Mount Hood, but it takes a strong stomach and about a half hour of careful driving. We debated who among us should get the cherished front seat, the place least likely to induce carsickness (you can check out a back seat perspective of the drive in the video below). It was all for nothing, though, since we all gratefully stayed healthy during the ride to the top. Sarah, Adam and Quiggly joined us for this hike. We were a party of six, plus a small and determined dog! 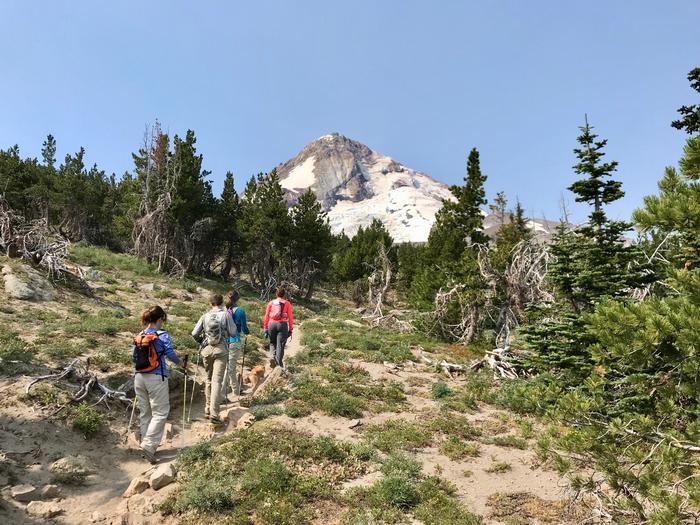 First miles of the hike with peak views of Mount Hood

We started hiking from the packed trailhead parking lot at Cloud Cap right around 10a. The first few miles that led up to the junction with the Timberline Trail were quite pleasant and mostly tree-lined. We took a right turn at the junction with Timberline to start climbing the Cooper Spur Trail. Once we reached above tree line, we were rewarded with expansive views to the north of Mount Adams, Mount Rainier and Mount St. Helens. Skies had been hazy for the last few days but today was far clearer. We reached the Cooper Spur shelter, a 10’ square stone shelter built in the 1930s by the Civilian Conservation Corps. It was the perfect place for a break. 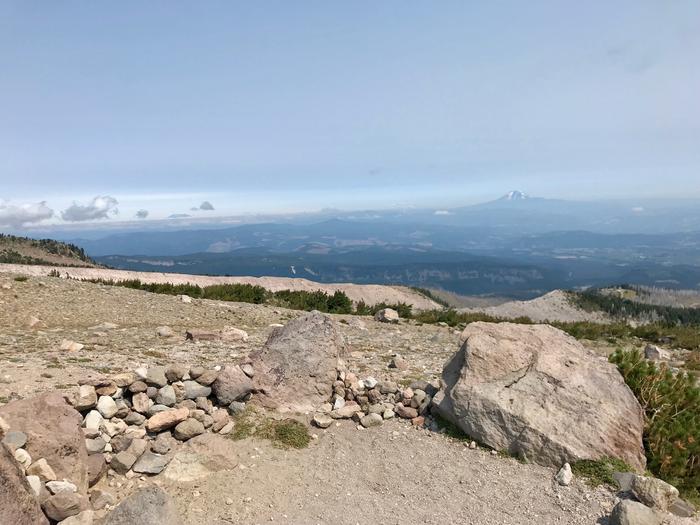 Views of Helens, Adams and Rainier to the north

We took a brief detour on a spur trail to view Eliot glacier. Sarah and Adam were shocked at the lack of coverage of the lower glacier and took time to point out how low they’d encountered ice in prior hikes. We watched a few parties below who were practicing their skills on portions of the glacier. 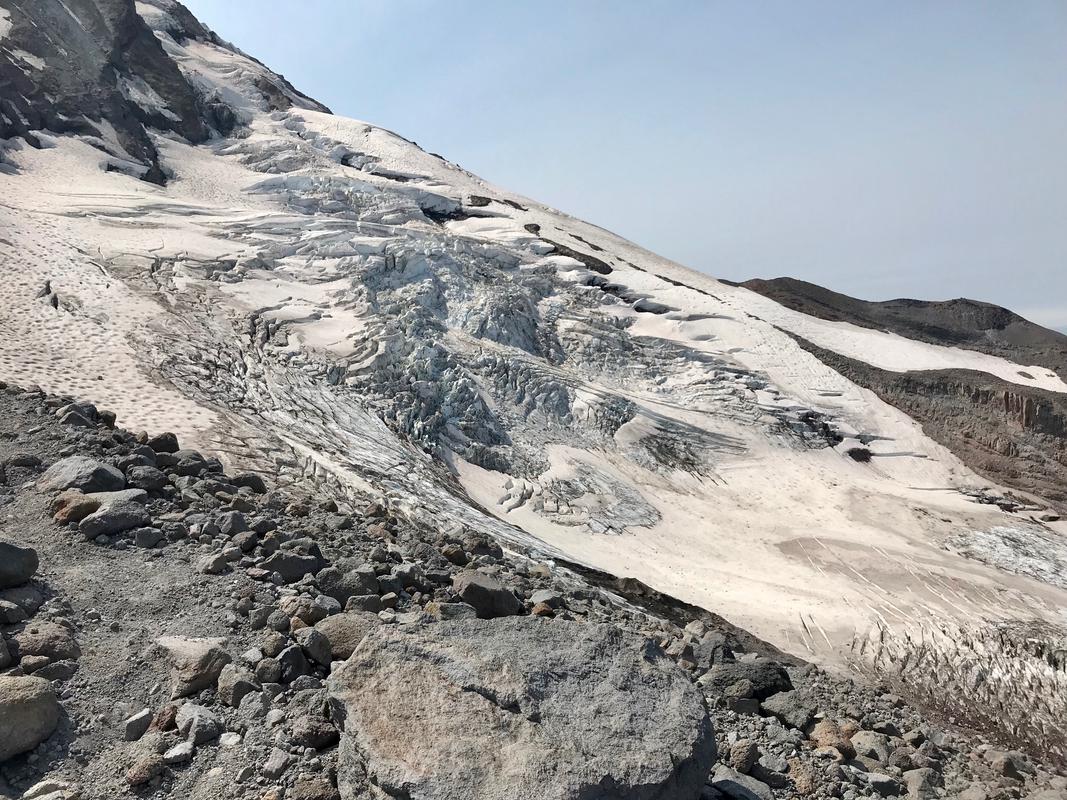 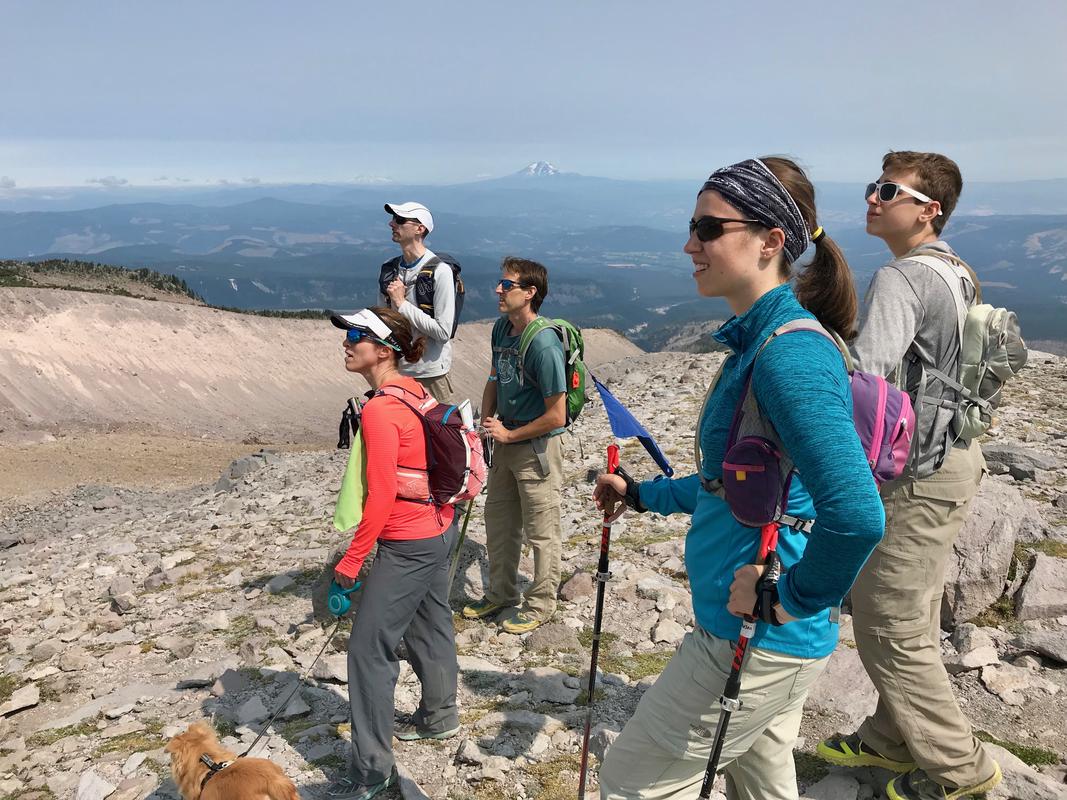 The remaining miles were nicely switchbacked and we made steady progress toward a crest that’s a common turnaround point. 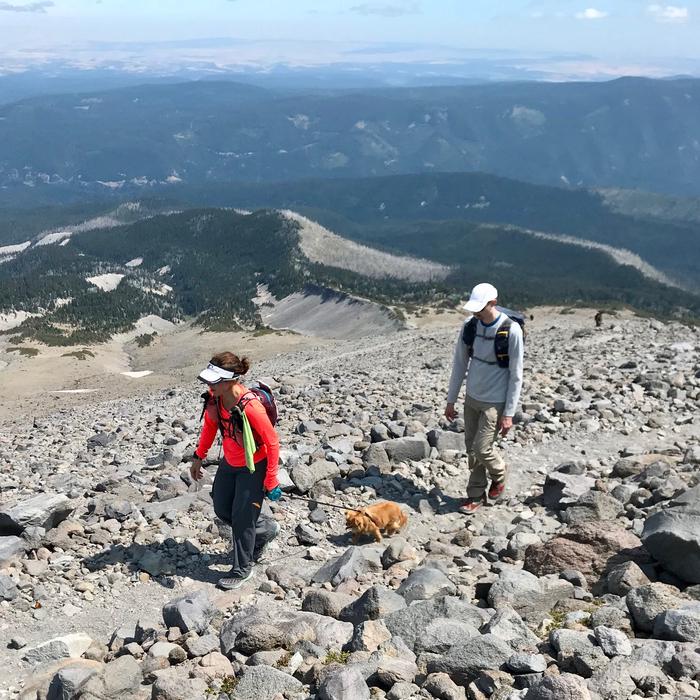 Sarah and Adam guide Quiggly up the switchbacks

The plaque on tie-in rock commemorates five climbers who died on June 21, 1981. They fell from Cooper Spur while descending, and the plaque implores climbers to “Walk gently, friend. You are walking in the path of those who went before.” 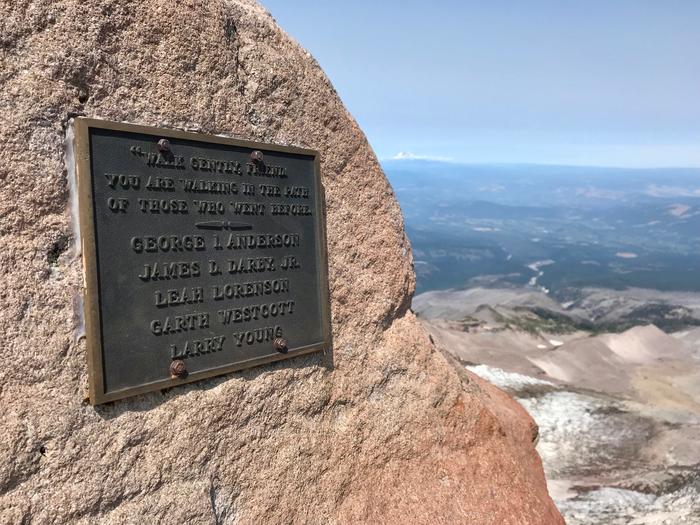 The plaque on tie-in rock

We decided to proceed along the trail all the way past Tie-In Rock, ending up at the edge of the glacier after exactly 4 miles of hiking for a fantastic lunch and photo spot. Quiggly enjoyed rolling around on the glacier. 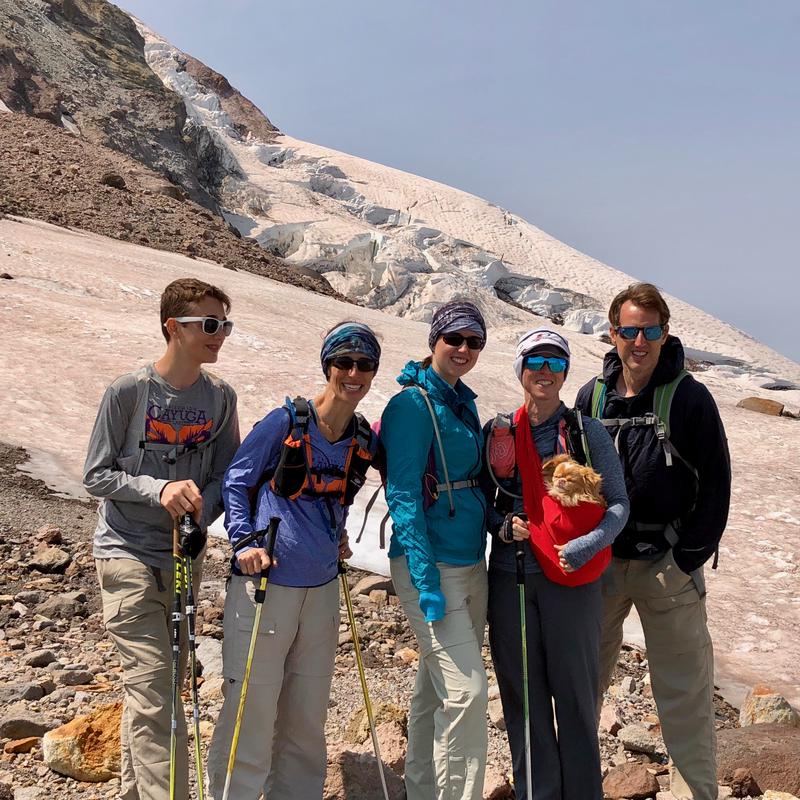 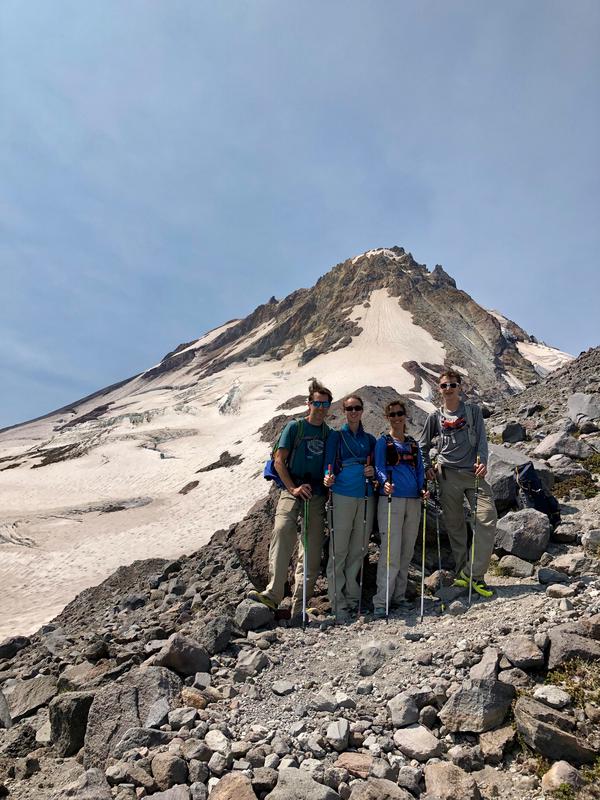 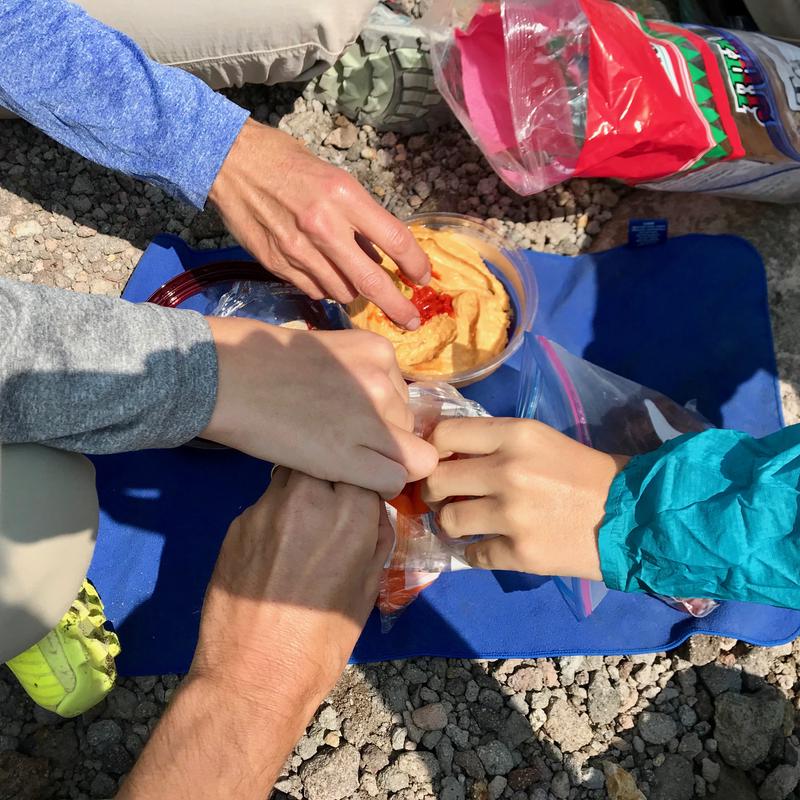 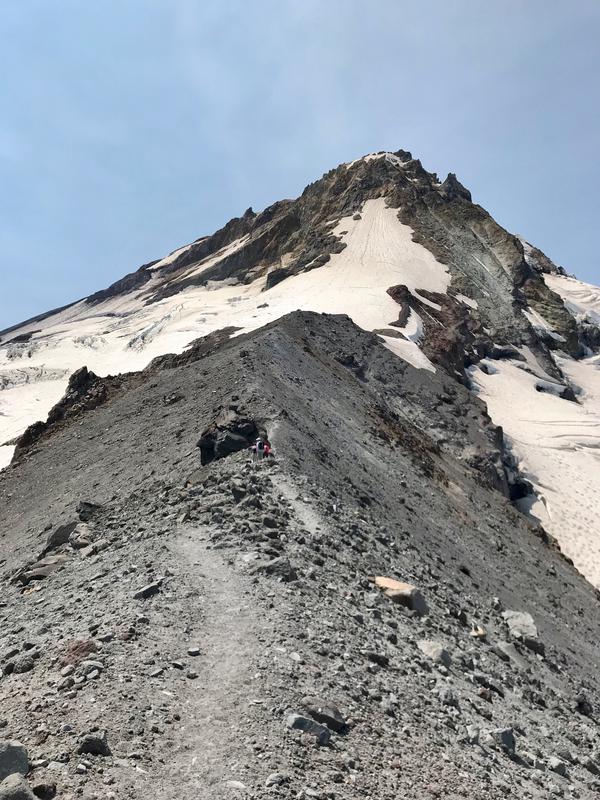 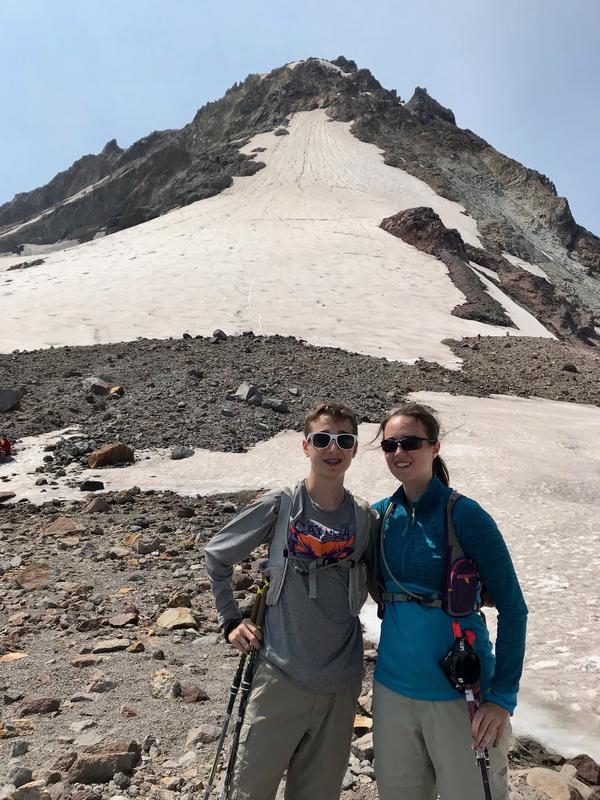 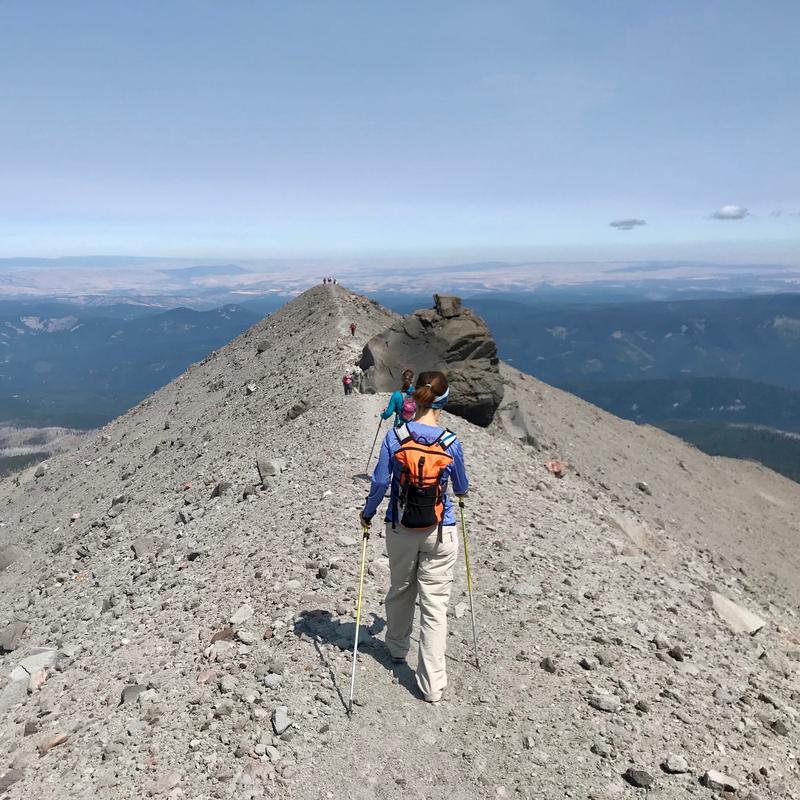 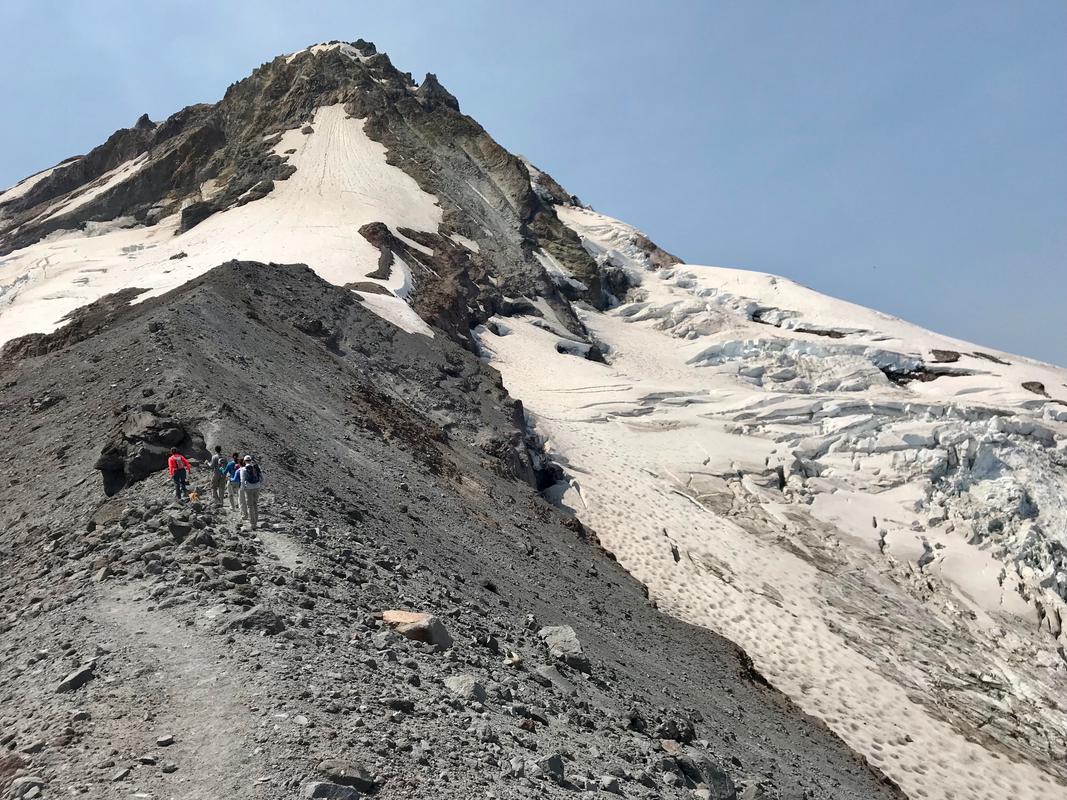 We bypassed a few of the switchbacks on the way down, opting to hop rocks along the edge of the spur. Once back on the switchbacks, I wondered aloud how they were initially formed. Adam knew: the US Forest Service carefully maps them out, using the terrain as a guide. Using tools, they move rocks to the side, carve out a bit of a path and tamp it down. Then hikers’ feet do the rest! I thought it was a similar parallel to how mogul courses in skiing are created, since we’ve watched coaches “set a course” by shoveling a very deliberate pattern of small bumps and troughs. Skiers do the rest as they slalom themselves through the mogul course. 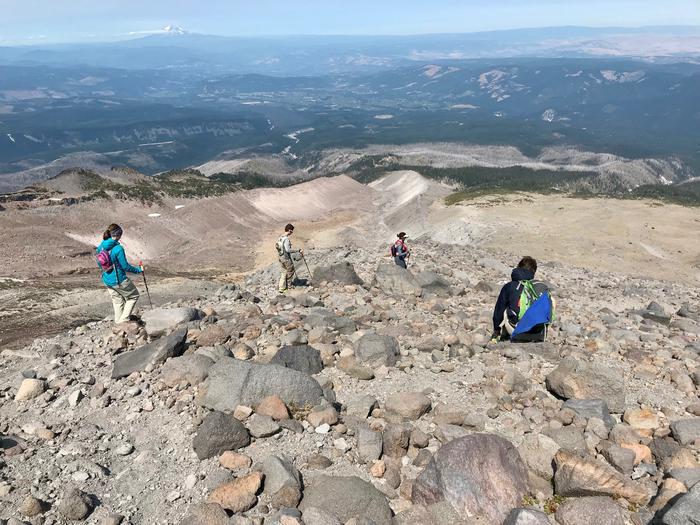 Hopping rocks on the way back down

Back at the junction with the Timberline Trail, we opted to go straight instead of turning a left as we’d come up. This took us along the edge of Polallie Canyon. I later learned from the guidebook that this was created in 1980 after heavy rains triggered a massive landslide and a flash flood. 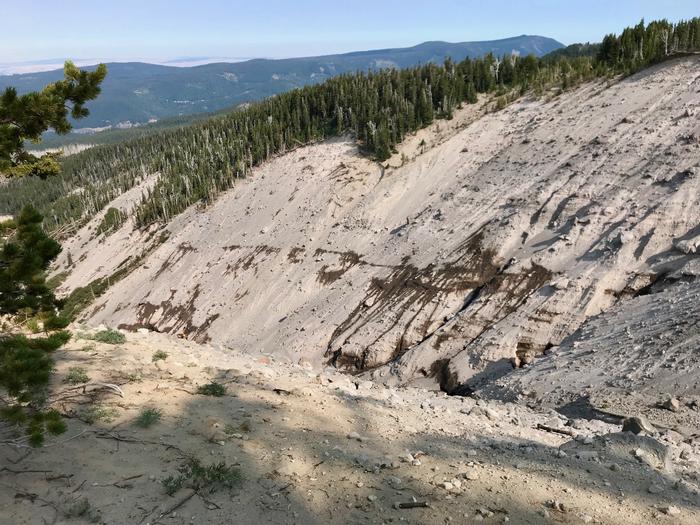 It was an impressive canyon, and one of the cooler sights was a quartet of trees barely hanging onto the cliff edge by their roots. After checking out the Tilly Jane complex, we ascended a short trail back to the parking lot. 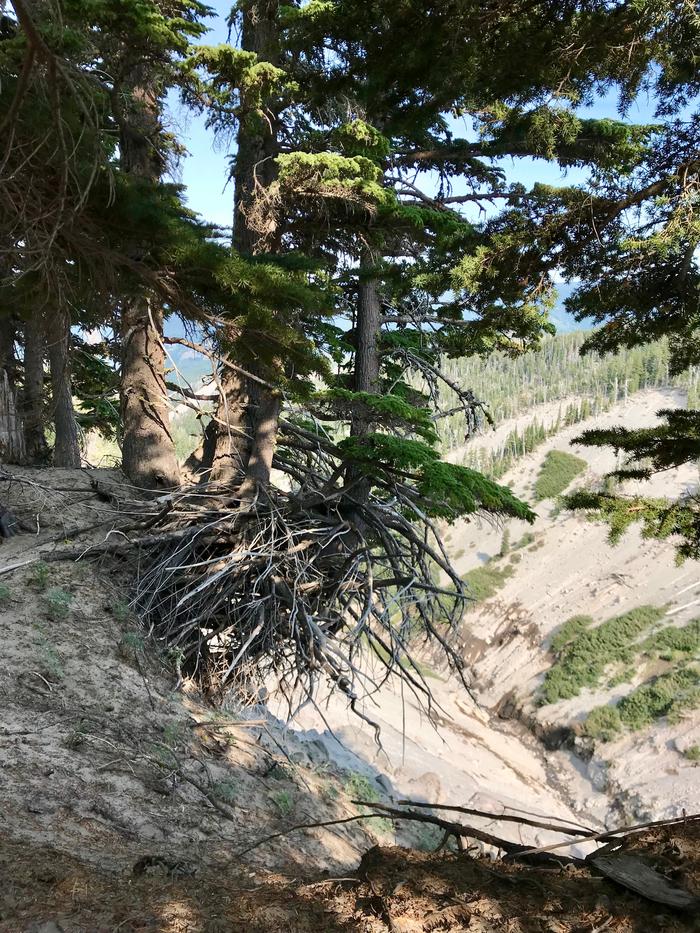 Trees barely hanging onto the cliff edge by their roots 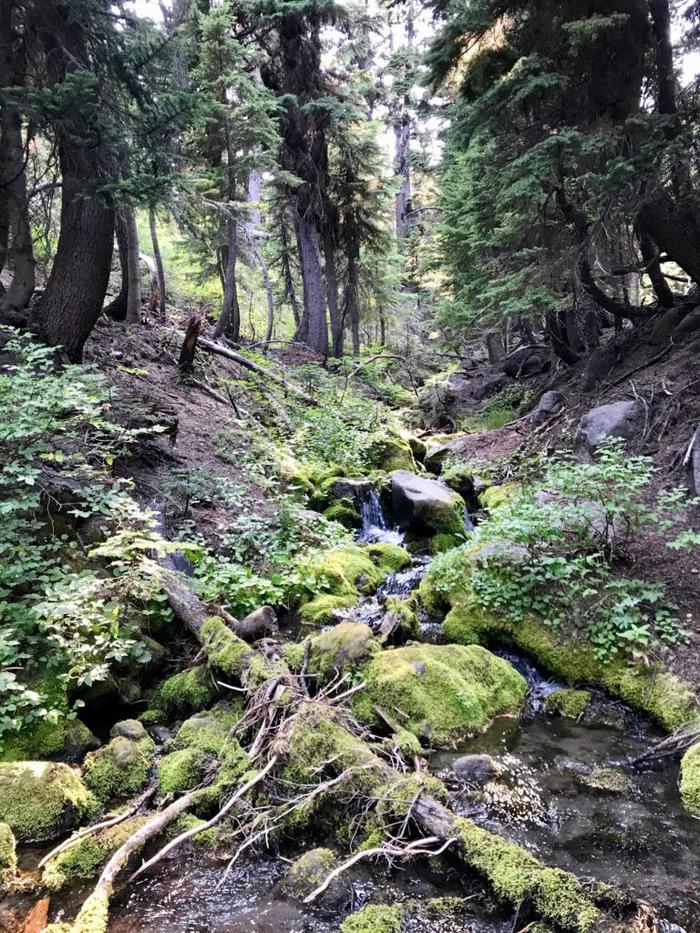 Lush greenery near a creek at the end of the trail

The drive down was no less harrowing but seemed shorter since we knew what was coming. We found an outside table right away at Mount Hood Brewing in Government Camp, enjoying burgers and beers before heading back to Portland. We all were wearing our Patagonia Houdini jackets for warmth, so took a picture while waiting for our food. 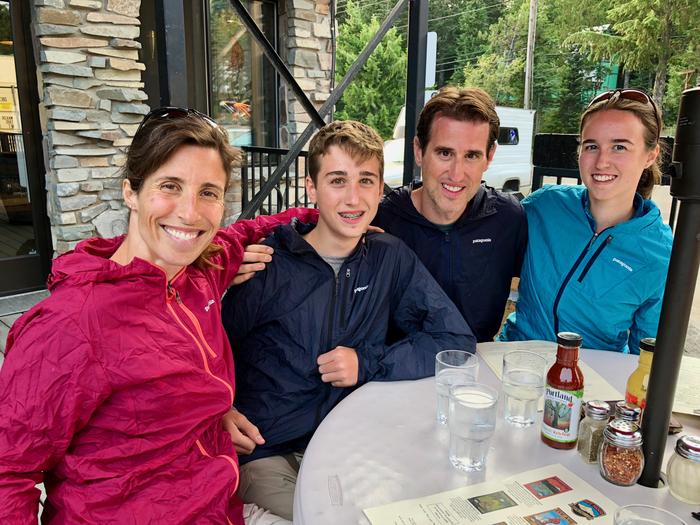