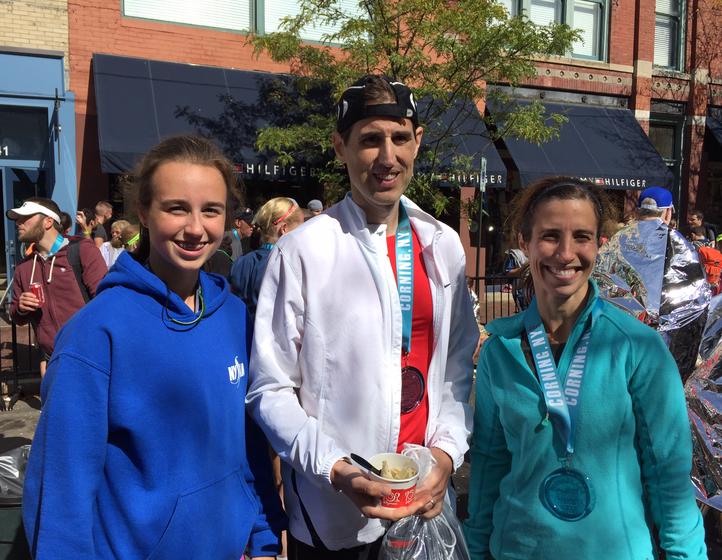 My second big challenge of 2015 was a full marathon. This would be my third full marathon. My first (Rochester) was unpleasant, as I was plagued by IT band issues. My second (NYC) went really well, yet I missed my goal of a Boston-qualifying time (BQ), which bummed me out. My third, this race, was in Corning, practically in my backyard where I enjoyed a Master's win in the half marathon last year. Would this be the year for a BQ for me? 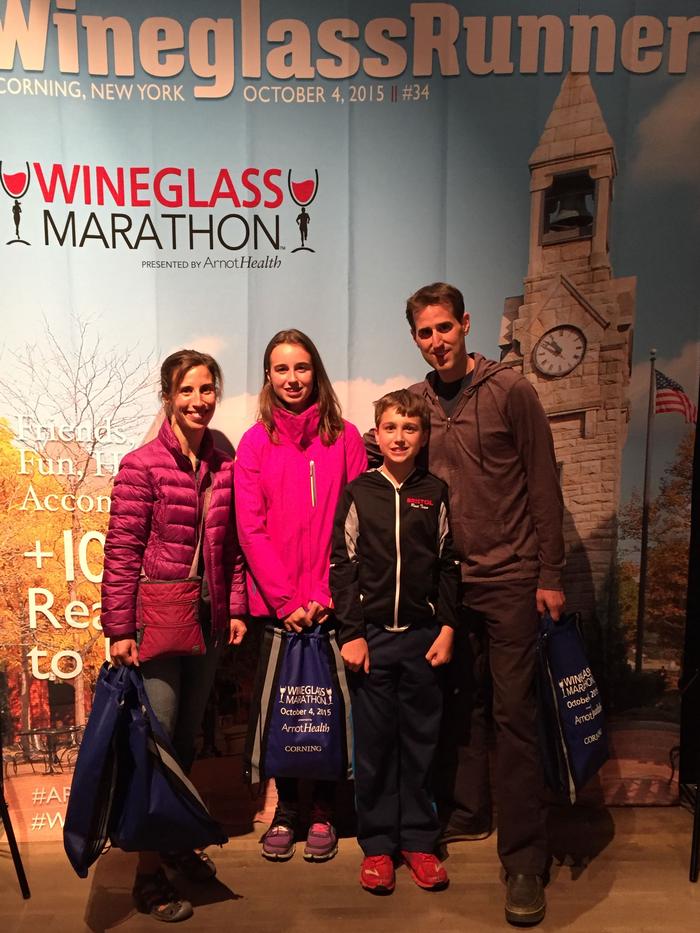 Going into this race, I was not as prepared as I could have been. I had a lackluster training cycle, mostly due to poor recovery from my 50-miler in May, and from also almost messing my knee up while trying to water a plant while standing on a "spinny chair". Note to self: don't do that again! I fell pretty hard and yanked my knee about, resulting in about a 2-week period of discomfort and scaled-back training. I did have a few bright spots in training, one that I blogged about I was so enthralled. Despite all that, I had a sunny mental disposition about this race, daydreaming about what it would feel like entering the finish stretch with a BQ in sight, practically leaping with joy!

We went to packet pick-up on Friday after work, so we could enjoy Saturday without having to take a trip down to Corning the day before the race. The expo was quite well-organized, and we enjoyed some pizza we picked up from Scuteri's Cannoli Connection in Watkins Glen on the way back home. Saturday night we had a wonderful pasta dinner at home, and talked about race day logistics. Xander was staying with my parents during the race after sleeping in at home, but Elizabeth (14) would be racing her first half marathon without Amy pacing her, which was going to be a big deal.

I don't think any of us slept that well before the race, which is nothing new. We were up around 4, had our coffee and some light breakfast food and out the door at 5 for the hour-long drive to Corning. I am continually amazed that my 14-year old doesn't need much prodding to get out of bed early. She is very independent, and I'm sure that ski racing has prepared her for these early starts as much as anything else. We brought bagels with peanut butter along for the ride, since we wanted to eat just 2 hours before the start. 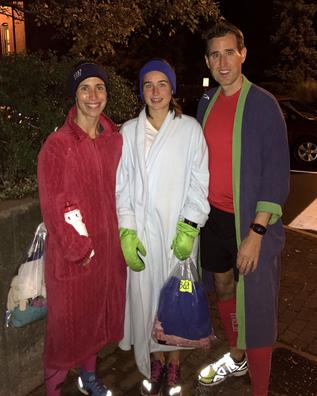 Before boarding our buses

We were in Corning before long, and parked at the YMCA. I realized I forgot my phone in the car (really, Scott?) after we reached the buses, so I ran back to get it while Amy waited up for me. Elizabeth got in the snaking line for the half marathon in the meantime. We boarded buses for the longer ride to the marathon start in Bath, NY. We were kind of bummed about seating: all of the seats on the bus at least had a single person in them, so we couldn't sit together. We did share snippets of conversation across the seats but it was mostly a quiet ride.

The half marathon start is SO much nicer than the marathon start. At the half, everything was self-contained and there was a school with a track. For the marathon, we found a DPW building that was open for runners, so that provided some warmth. They wanted to have us go 100 yards down the road closer to the start, though, where there were more facilities and tents. We mostly walked around, though, after checking our bags with UPS (and saw our mail carrier, Lisa, helping!) Other runners were eyeing our bathrobes, and I was grateful that Amy had picked them up at the Salvation Army to help us keep warm before tossing them aside.

Nerves were not a problem for me this year. I usually have a quickened heart rate before a start, but this year I stood among the throngs of runners not feeling much. Just a readiness to get out and run! I told Amy earlier in the week that I didn't know if a BQ was attainable, but I was going to put all the cards on the table and go for it. I wasn't going to get caught up in the beginning and go out too fast, either. These thoughts replayed in my mind briefly, and then we were off!

My goal was to stay ahead of the 3:15 pacer, who would be running 7:27 splits. I settled into a good pace for the first mile, a 7:26. Good, not too fast. I had to fumble a bit with my iPhone since it was stuck on single-track repeat (really?), and soon I had it set to I could listen to my carefully-crafted playlist. Being a bit facetious here, since I threw it together in about a half hour the day before the race!

I came upon a pack of runners that had an unofficial race goal of 3:08, and the two guys pacing were right on target. This would be a BQ pace for me, with 7 minutes to spare, and I found that through mile 17, I hung with them pretty easily. I was really happy with the consistent splits and felt really fresh.

I knew I could back off a little, so when I walked through an aid station to drink water, I wasn't worried when they pressed on. This part of the course also featured a headwind, and without their pack to break the wind, I felt this to be the most oppressive part of the course so far. I pressed on, toward the part of the course I really dislike. It winds through neighborhoods and turns a lot, and seems to never end. At mile 23-24, I was feeling quite miserable, and my quads had tightened noticeably, shorting my stride. My pace started to fall quickly, and my heart fell when that 3:15 pacer passed me at mile 24. He was so kind, encouraging me to keep with him, yet I don't think I could have, even if he had a briefcase with a million dollars. I was physically shredded, and despite my mind WANTING to go faster, my legs would no cooperate.

I quickly chose a secondary goal: having a personal best. I calculated that if I could do under 10-minute miles for the rest of the distance (only a 5K!) I could do this. For the last 3 miles, I laid down a 9:46, 10:04 and a 9:26, giving me a PR by 3 minutes, 31 seconds. I don't think I mustered much of a smile as I approached the finish, as I had nothing left to give. I knew my daughter was in the crowd somewhere, and she quickly found me in the finish area.

My legs hurt so bad, and I had a lot of trouble walking. Elizabeth was worried about me, and I think I used some colorful language (yep, I'm sure of that) to describe my discomfort. She snapped me out of it pretty quickly as she told me to calm down, and I found a chair to lightly massage my legs back into shape. She was so helpful to me, getting me pizza (I fought the nausea and got it down) and some Gatorade. She even got me my drop bag with warm clothes, which felt SO good to put on.

It's barely a day later, but I think my post-race thought is still valid. I do NOT have any love in my heart for the marathon distance. I love trail running, ironically, and love going beyond 26 miles there. I have had three tough marathon performances, but there is that 20-mile wall to consider. I really pushed myself, set ambitious goals, and came out the other side having learned some lessons. I know there's training I can do to help endure those last 6 miles with a better outcome. Is heart-rate training the answer? I do know that for most of this race I was securely in Zone 4, which is beyond lactate threshold and a recipe for disaster over long distances. So, I'm not writing the marathon off ... yet. We'll tangle again in the future, maybe when I'm 45 and go up an age group. For now, I'm thinking next year might be the "year of the half marathon". And an intermediate triathlon. Yeah, I like the sound of that.

So, ski season? I'm ready for you now. Bring it on.

Wineglass Marathon by the Numbers