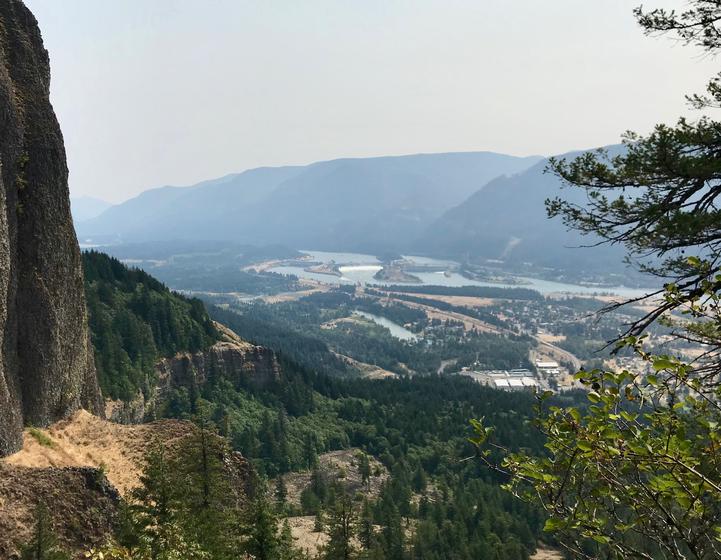 Sarah and her cute dog Quiggly joined us for the third hike of our trip. She took us to Hamilton Mountain on the Washington side of the Columbia River Gorge. As we were driving east of Portland, Sarah told us about how some trails in Washington required a different permit. We'd been so used to our Northwest Forest Pass that we hadn't even considered it could be something different. Due to a variety of reasons, it was, and Sarah had purchased the Discover Pass we needed. We crossed the Bridge of the Gods and parked at the trailhead for Beacon Rock State Park.

Shortly after starting the hike around 10a we came upon Pool of the Winds, one of the waterfalls along Hardy Creek. We thought the bridges and railed switchbacks reminded us of the rustic nature of the ride queues at Disney for Splash Mountain or Thunder Mountain Railroad, but this was the real deal. 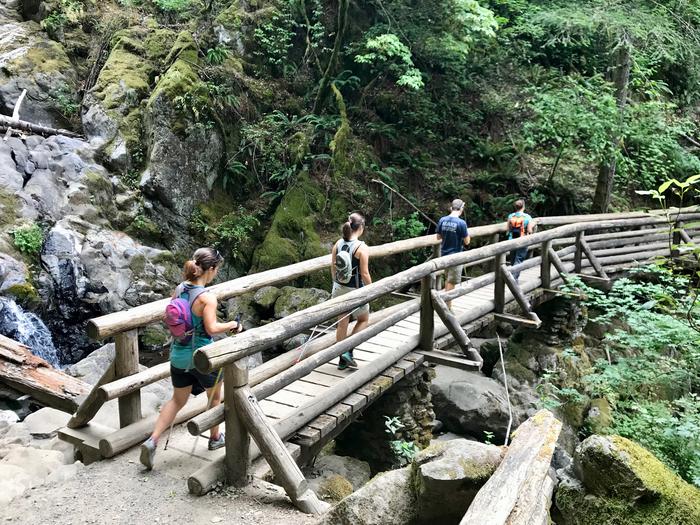 Crossing bridges at Pool of the Winds

Shortly after we began switchbacking up the hill we were rewarded with expansive views of the Columbia River gorge. Quiggly was holding his own quite well despite his little legs. We stopped to offer him some water but he wasn't interested. That saying about horses just might apply to others in the animal kingdom, too!

Just under 2 miles into the ascent, we came across something you don’t see everyday. It was a pop-up lemonade stand perched on a rocky outcropping, in sharp relief against the blue sky. A smiling couple asked if we wanted free lemonade (as their chalkboard sign advertised). They were representing Merrell and Backpacker Magazine and were taking their pop-up stand all over trails throughout the region. We were experiencing their Merrell Magic campaign! We stayed with them for awhile and took some pictures. We enjoyed lemonade with blueberries on skewers and I snagged a clementine for some additional refreshment. 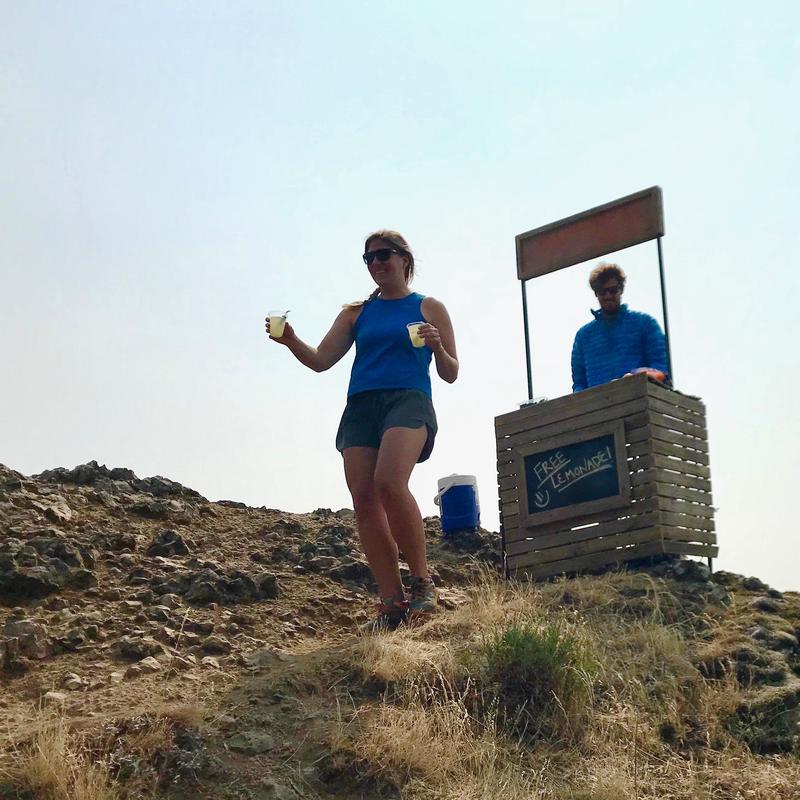 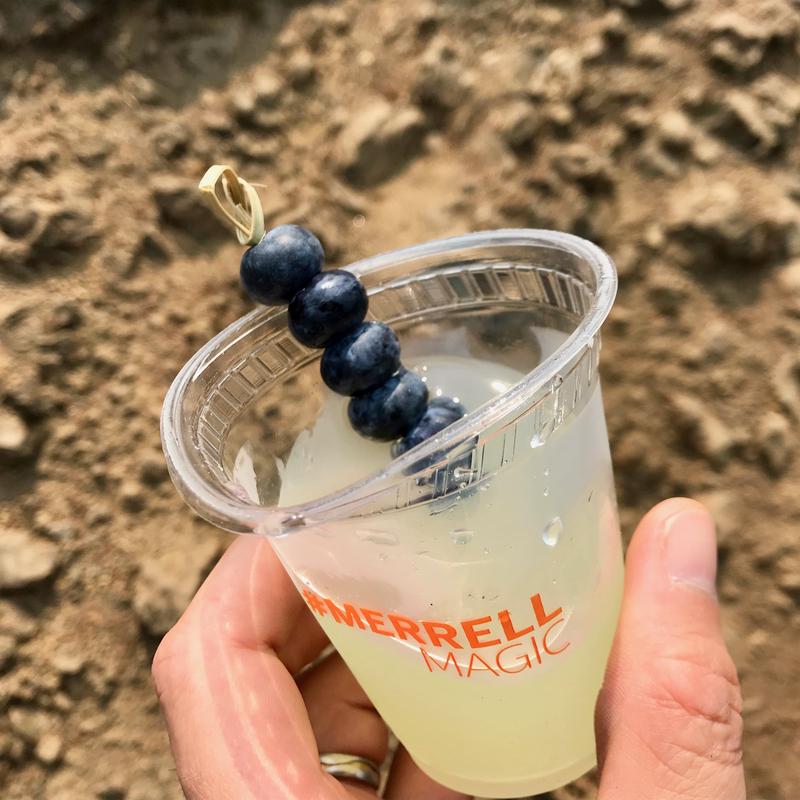 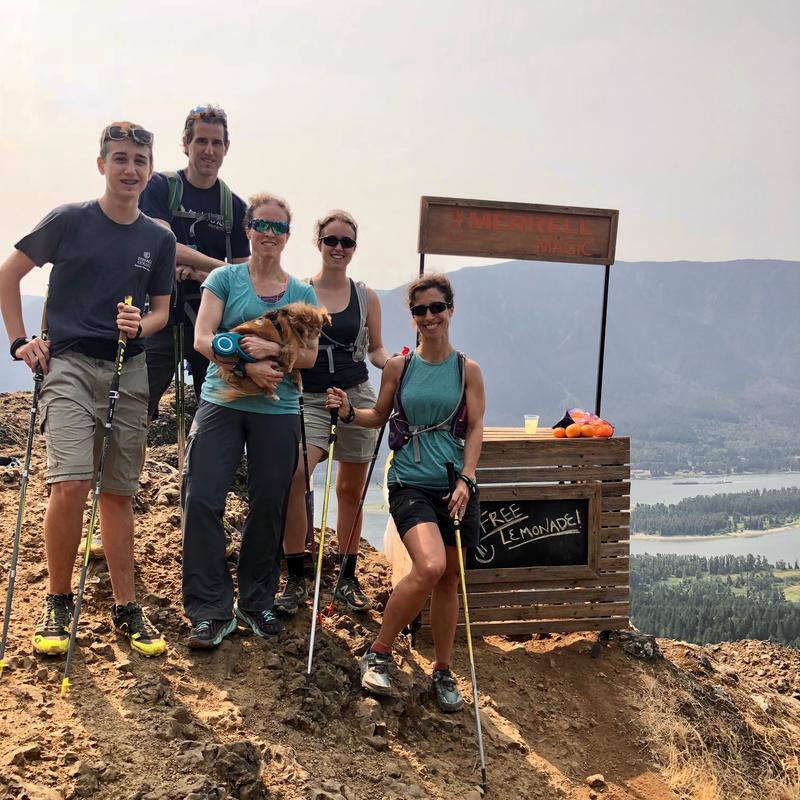 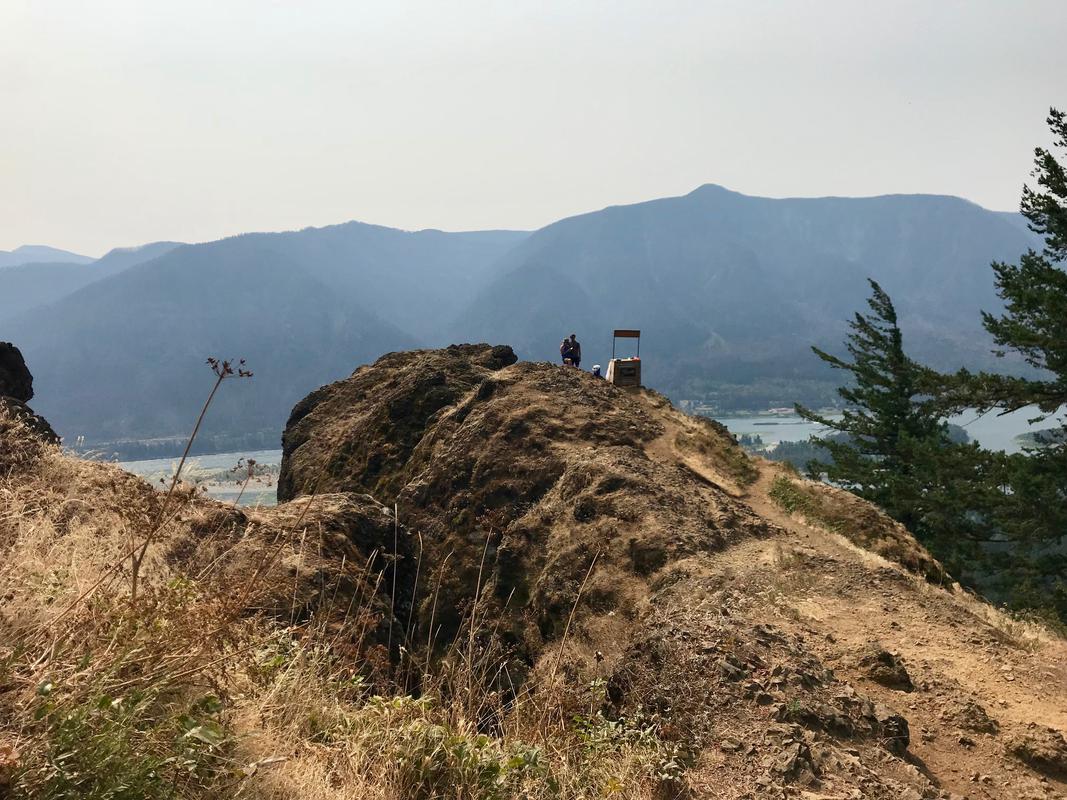 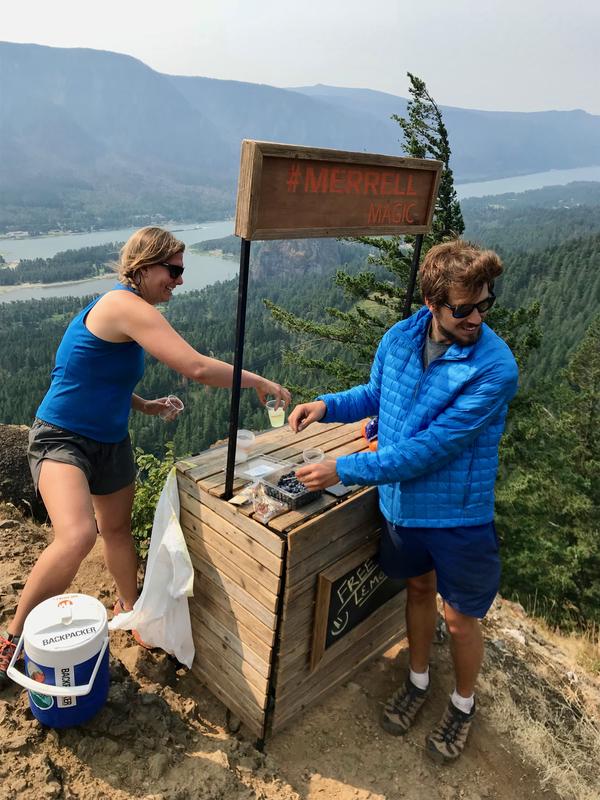 We ascended again through what seemed like an endless series of switchbacks. We arrived at the summit of Hamilton Mountain at 3 miles but it was not the most comfortable place to linger. We had a small snack while standing in a sunny, sandy clearing and then resumed our hike. After another ¾ of a mile we came upon an expansive saddle: it was the perfect place to lunch. We sat on some low rocks and enjoyed a small lunch of carrots and hummus. 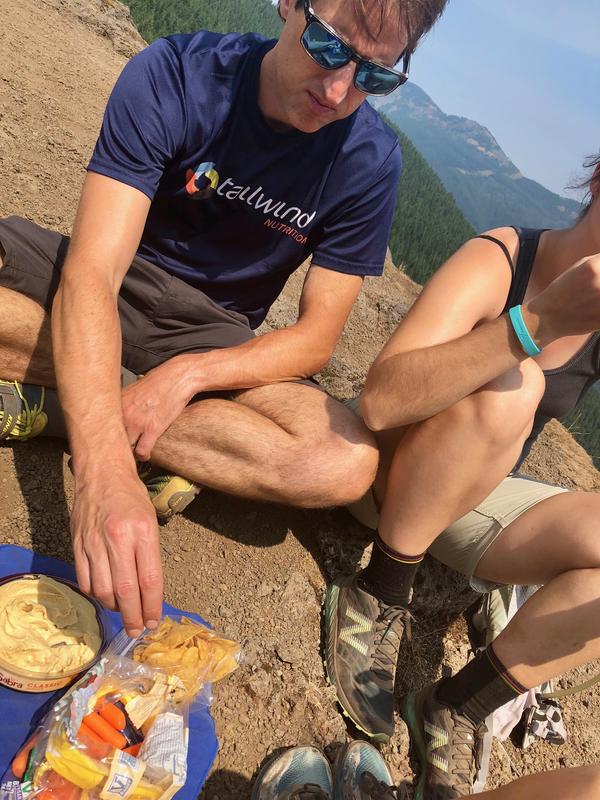 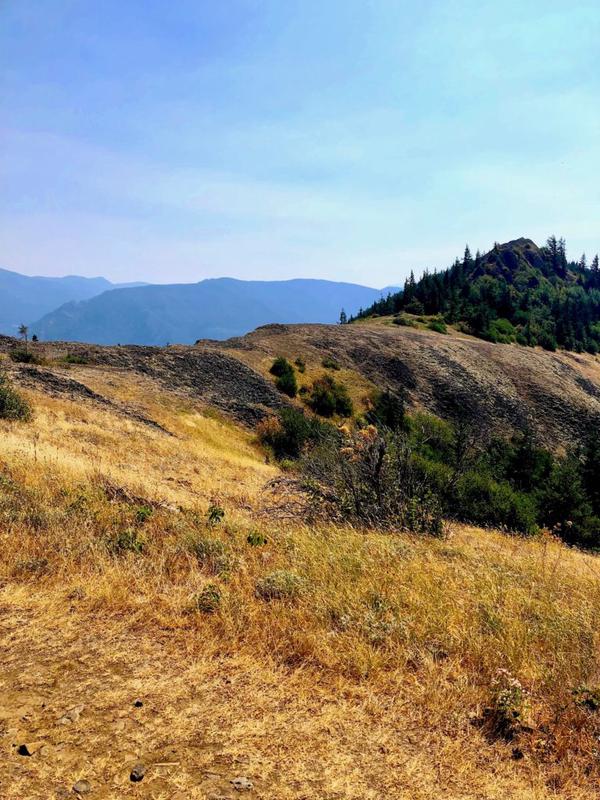 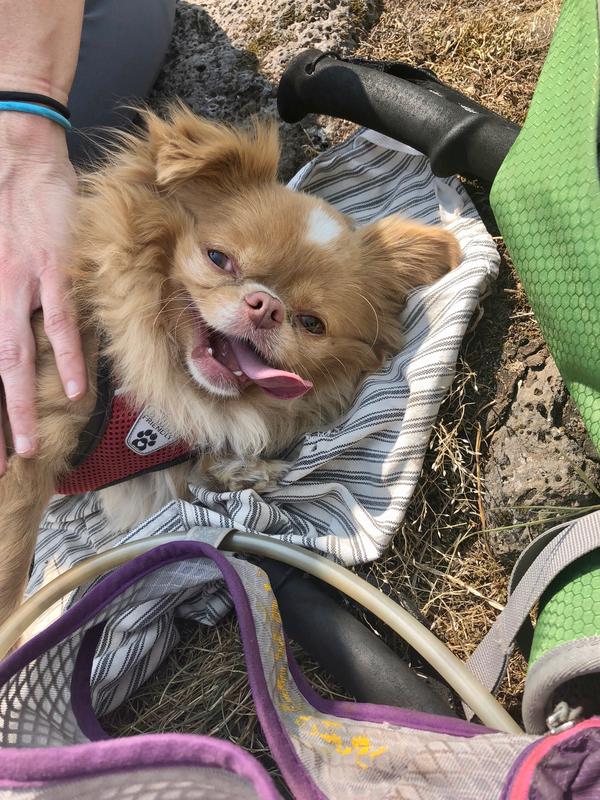 We descended on an old logging road before getting back on trail. This part of the hike was rather nice, shaded and mostly level. Elizabeth took a turn at holding Quiggly's leash. It was very cute to watch him hike as close as he could get to Sarah's heels! 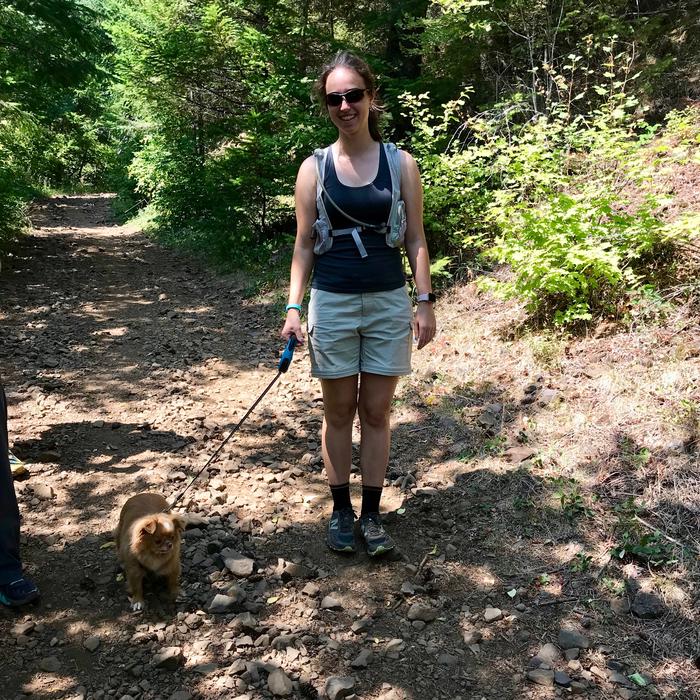 Much of the conversation Amy and I had on this stretch was about the myriad possibilities we could have to open parts of our home to AirBnb guests. We'd been having a great experience with our hosts in Portland, and thought we could do something at home in the future. It wasn't long before we'd spent hundreds of thousands of virtual dollars in our heads! We met back up with the junction to the trail we’d come up on and soon arrived back at Pool of the Winds. We got up close to the mouth of the waterfall and felt the cool breeze emanating from it. A huge log had been stuck up inside the main cataract of the falls, making for a very interesting photo. 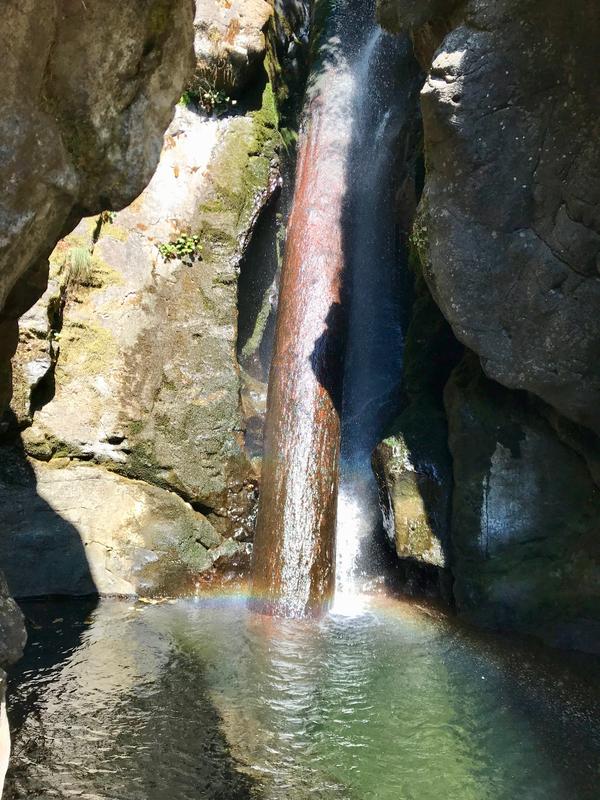 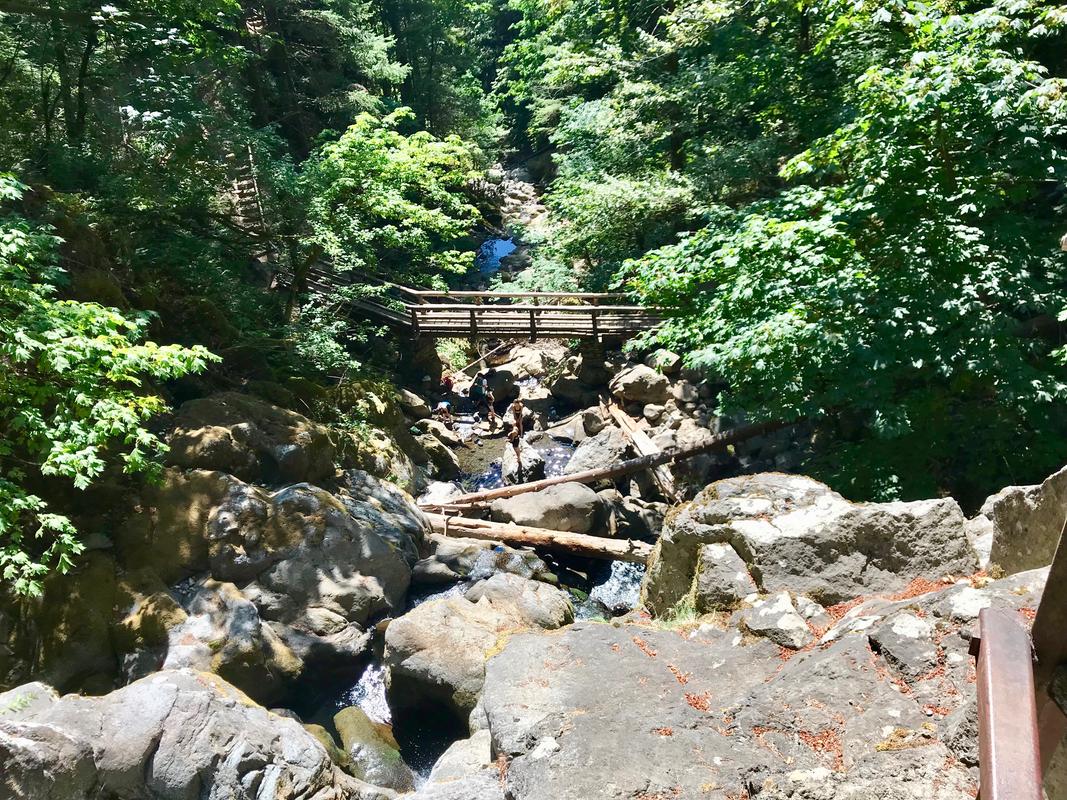 Quiggly hiked most of this route under his own power, except for a short ¾ mile stretch where Sarah carried him. He's a strong little hiker. He even has his own Instagram @quiggquigg if you want to follow him! 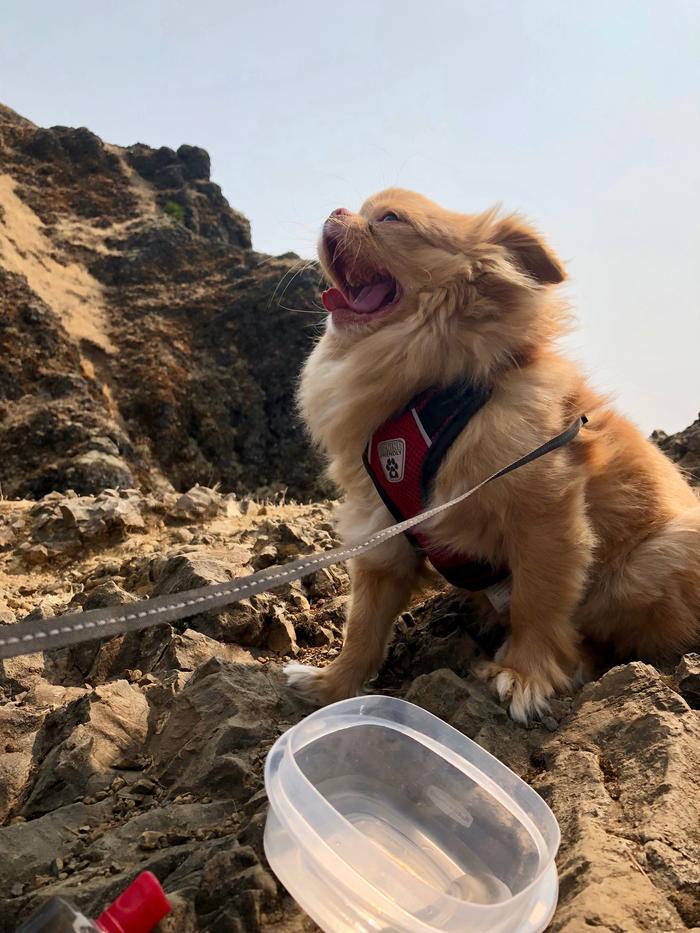 Quiggly is a power hiker extraordinaire!

We drove further east and crossed back into Oregon. We enjoyed an early dinner at Solstice, a fantastic pizza place in Hood River. Draft beer is always so wonderful after a hike and the outdoor seating was perfect for Quiggly and the views of the wind- and kite surfers enjoying the Columbia River. 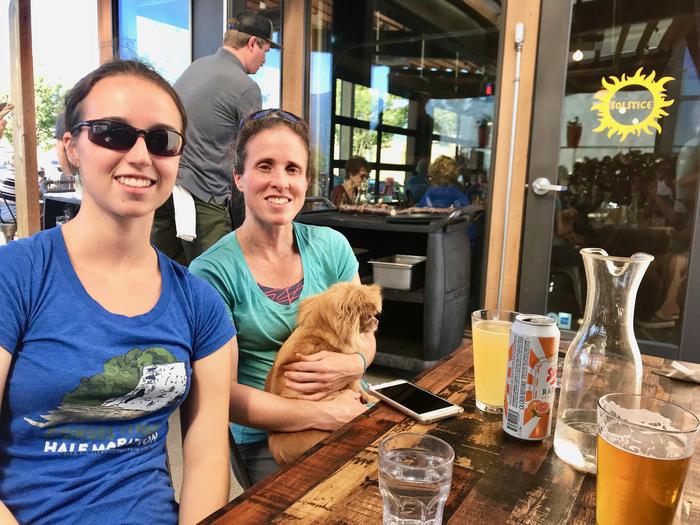 Amy, Sarah and Quiggly at Solstice in Hood River 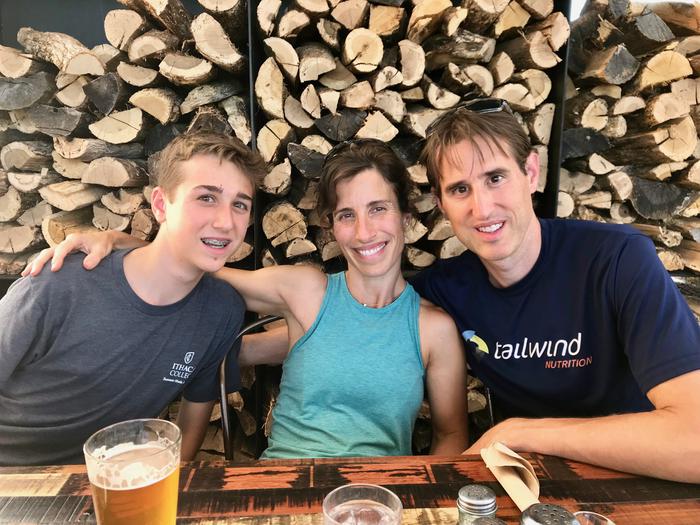 Xander, Amy and me at Solstice in Hood River