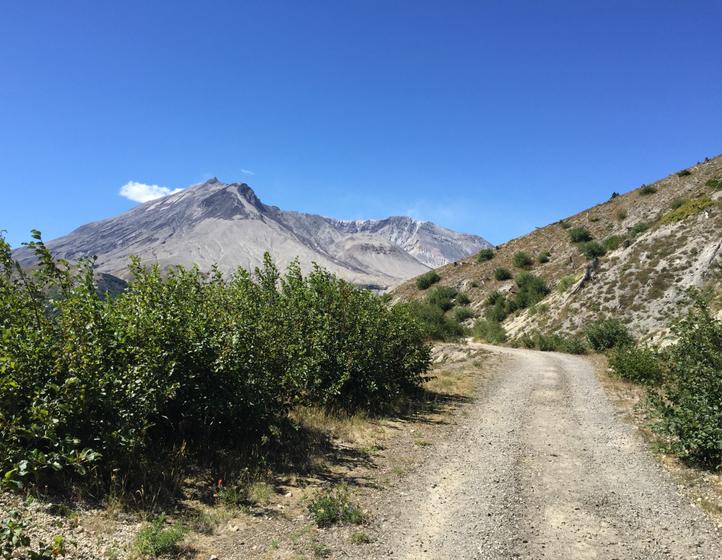 This was our first hike of our 2015 trip to the West coast, and what a great way to start! Mount St. Helens is an amazing place to visit. The starkness of the landscape and evidence of the massive eruption can't help but humble you. We had gone to the Visitor Center on a prior trip, and opted this time to go directly to another location on the mountain. In fact, you can't get to the Visitor Center from the driving route to Windy Ridge!

It was a long drive from Portland, where had stayed the night. The road at times was windy, and unfortunately my eldest became carsick just 6 miles from the trailhead. We pulled over and helped her stomach recover, and then drove the remaining miles to an ample parking lot at an overlook. You can take a short hike up flights of stairs at the far right of the parking lot to what I imagine is a very nice view, but we opted to hike this day! At the left end of the parking lot is a gated road. The trail climbs for a bit along this road and then opens up nicely with views all around.

Just a few miles into the hike, we passed two women with a lot of gear around them. I commented that it looked like an aid station, they said "It is!" Turns out the Bigfoot 200 was running that day through the area, and there was a good chance that we'd see some ultra runners. How cool!

We continued making progress toward our goal of Loowit Falls, taking note of the race signage pointing the way on several signposts. We passed through several gullies, breaking up the otherwise homogenous post-eruption landscape. Being a drier-than-normal year, I think the wildflowers that normally dominate this landscape had not come out. The starkness was still something quite amazing to see, and the minutes ticked away as we hiked. 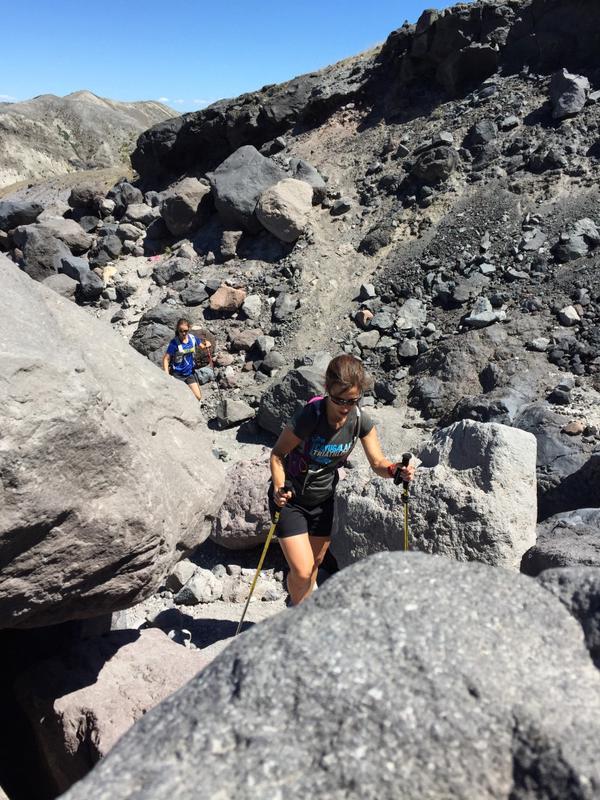 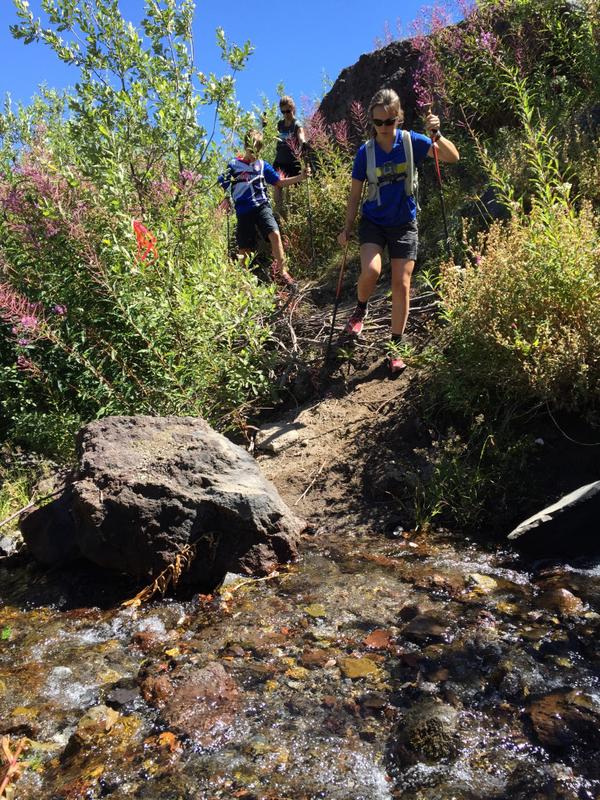 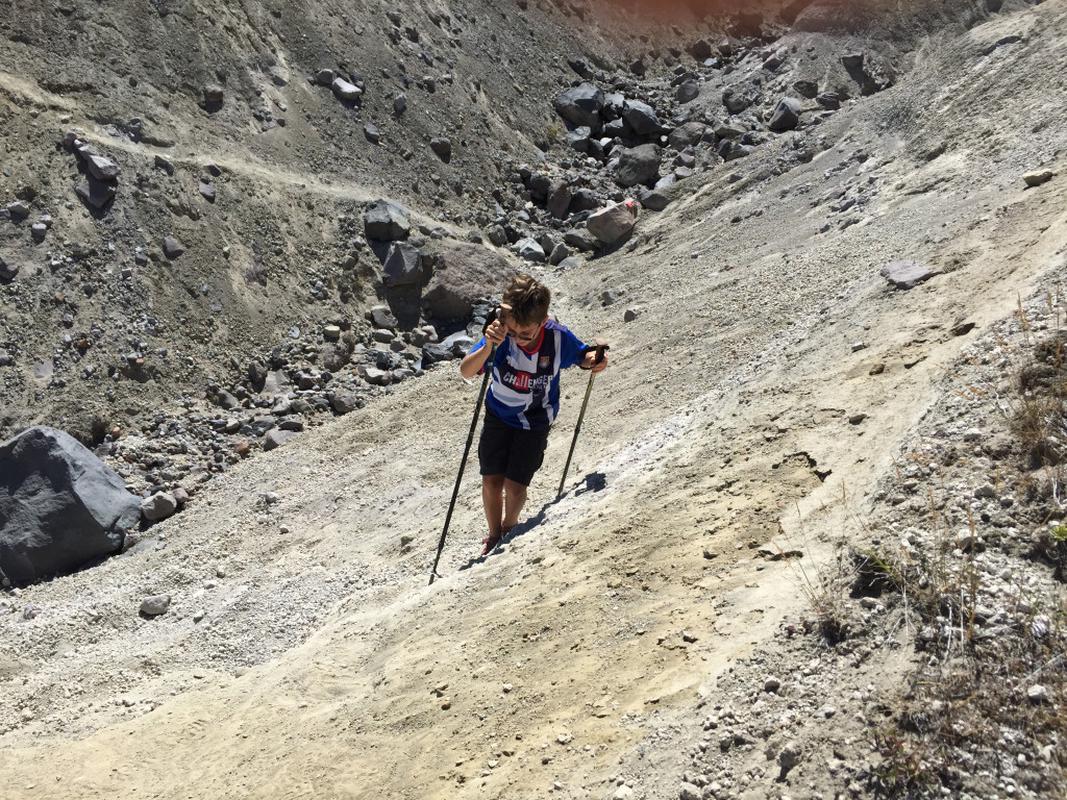 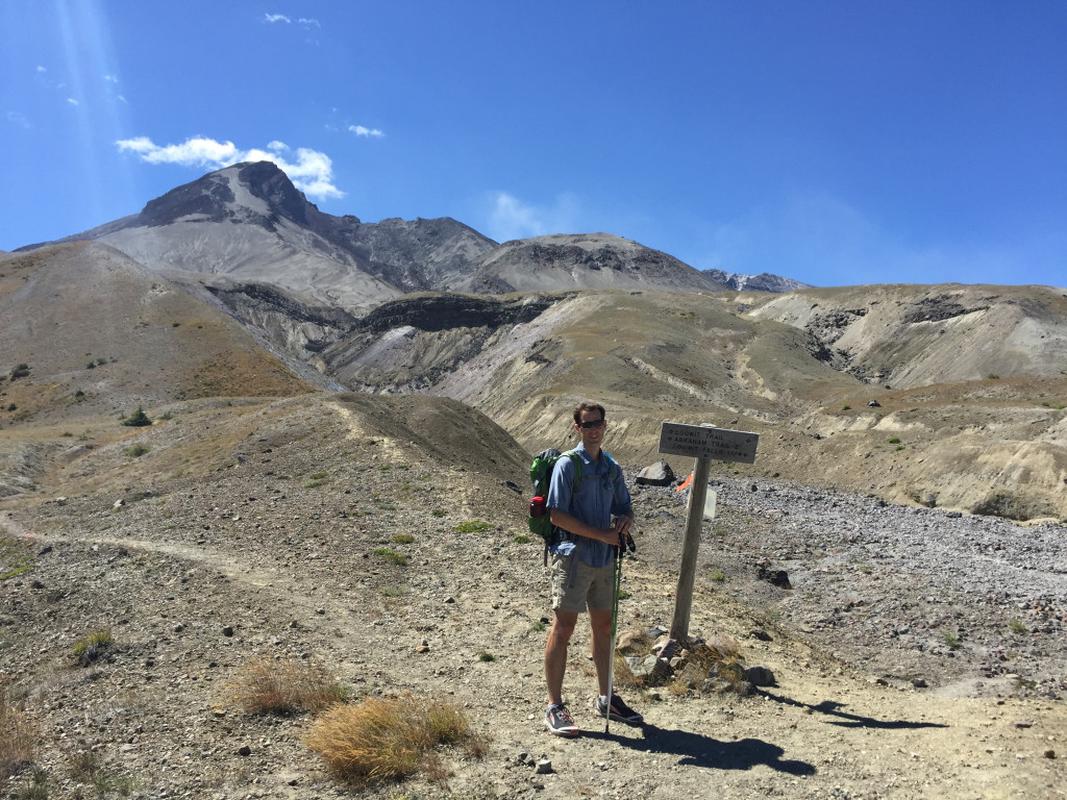 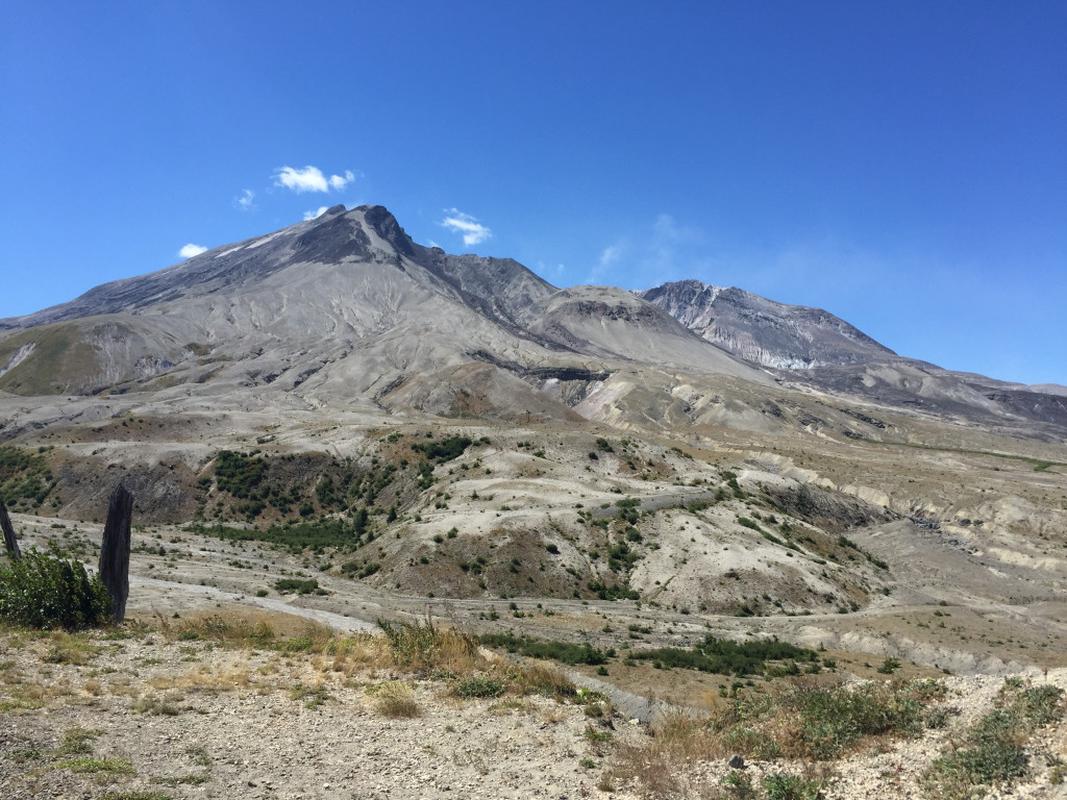 Shortly after we got to the spur trail that leads to the Loowit Falls, we got our first glimpses of them. I was instantly reminded of Taughannock Falls near our home, despite the lack of lush greenery around these particular falls. After a short hike, we were at the trail's end, overlooking a deep chasm carved by the water with the falls in the distance. We took a break for some trail food before turning back to retrace our steps back to the parking lot. 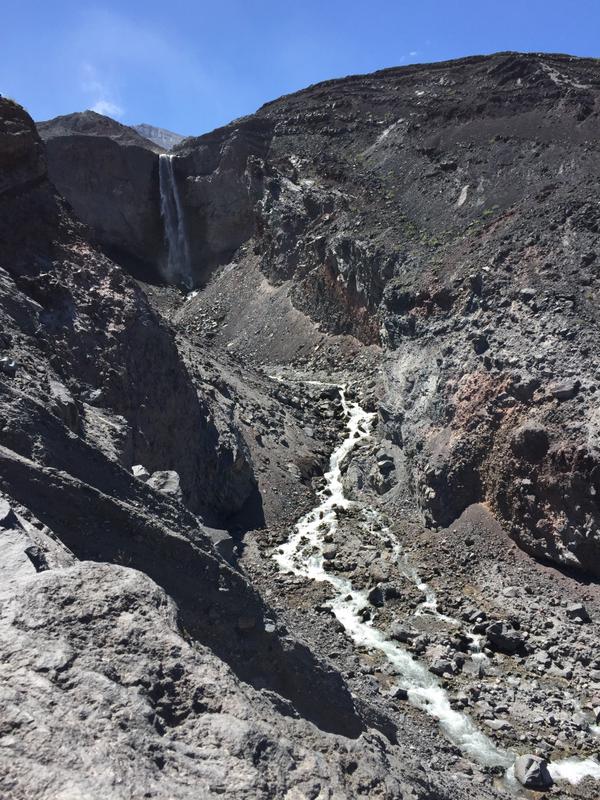 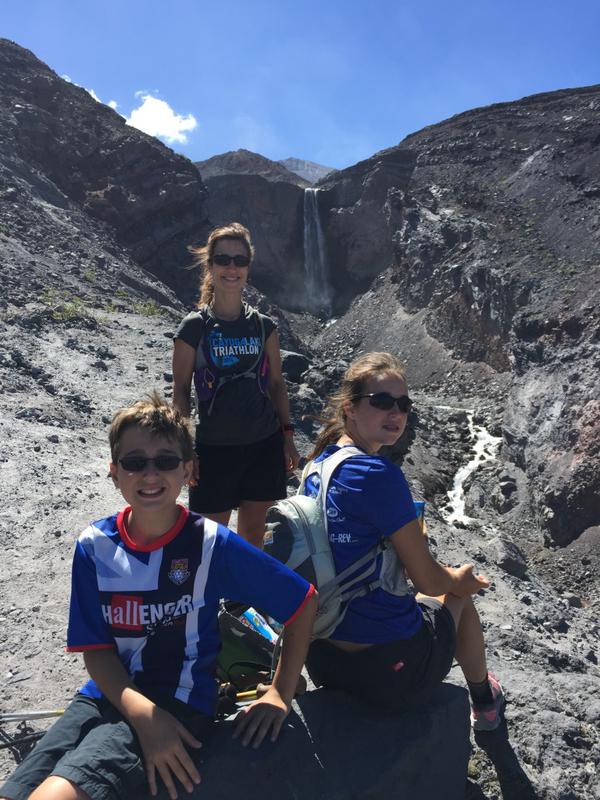 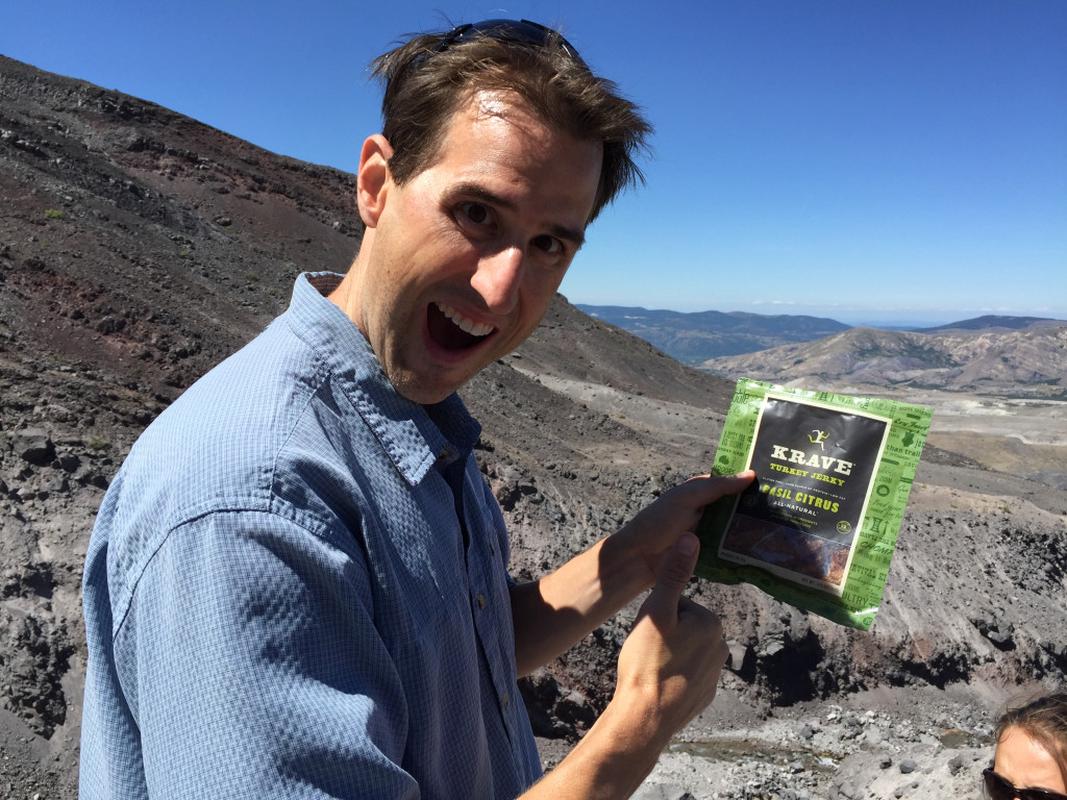 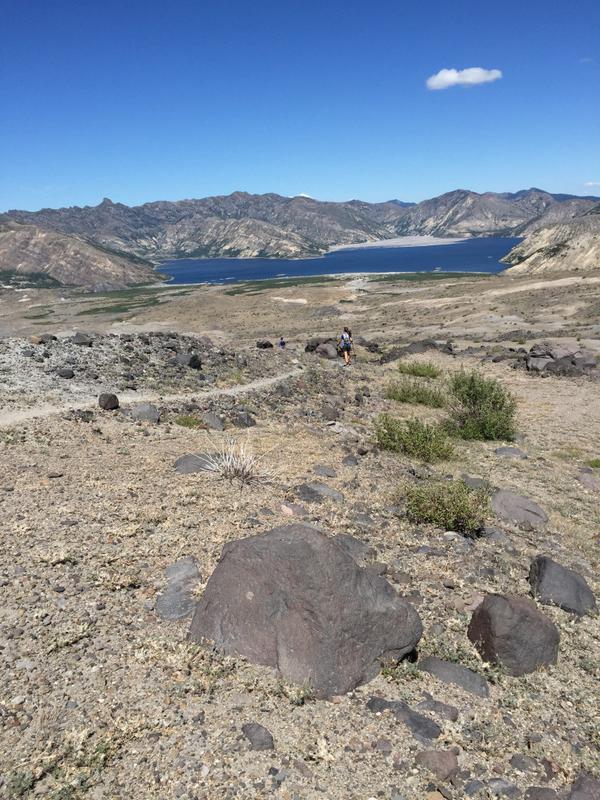 On our return, we were passed by several runners going our direction. One of the leaders looked a bit lost by the route through Big Spring, so I helped him out by shouting that he was, indeed, on the right track. It was a bit of a challenge to find a dry way across the foliage-covered creek, but we all did it on the way up, and were able to point the way.

One runner who passed us did so on a stretch of trail that, as we understood the signage, he shouldn't have been on. The race photographer, perched high on a ridge, saw this too and yelled out to the runner. We caught up to these guys and told them that the guy probably got off course at one of the signs that was unfortunately flapping a bit too much in the breeze. One of the people at the aid station came down to help the runner get his bearings, and we walked a bit up the hill with the photographer, chatting a bit about the race. We arrived at the aid station and talked with them about the signage. In doing so, we realized that one of the volunteers was Janet, who had paced my sister-in-law Sarah at Western States several years ago! Well, this was just ironic, but not at all surprising in the PNW to see people you know. We were sharing stories and smiling as the photographer walked about taking photos of us. Long story short, we're in the official race photos of the Bigfoot 200, and we weren't even in the race! 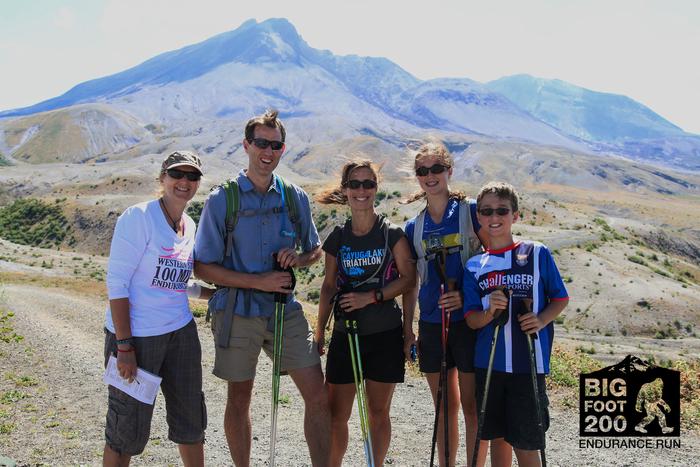 On the way out, the kids hiked quickly in front of us at times (probably looking forward to the ride back to Portland!) We had stunning views of Mount Adams, and enjoyed looking back at the landscape we had just traversed. We drove due south to make our way to Hood River's Double Mountain Brewery for a delicious dinner before heading back to Portland. 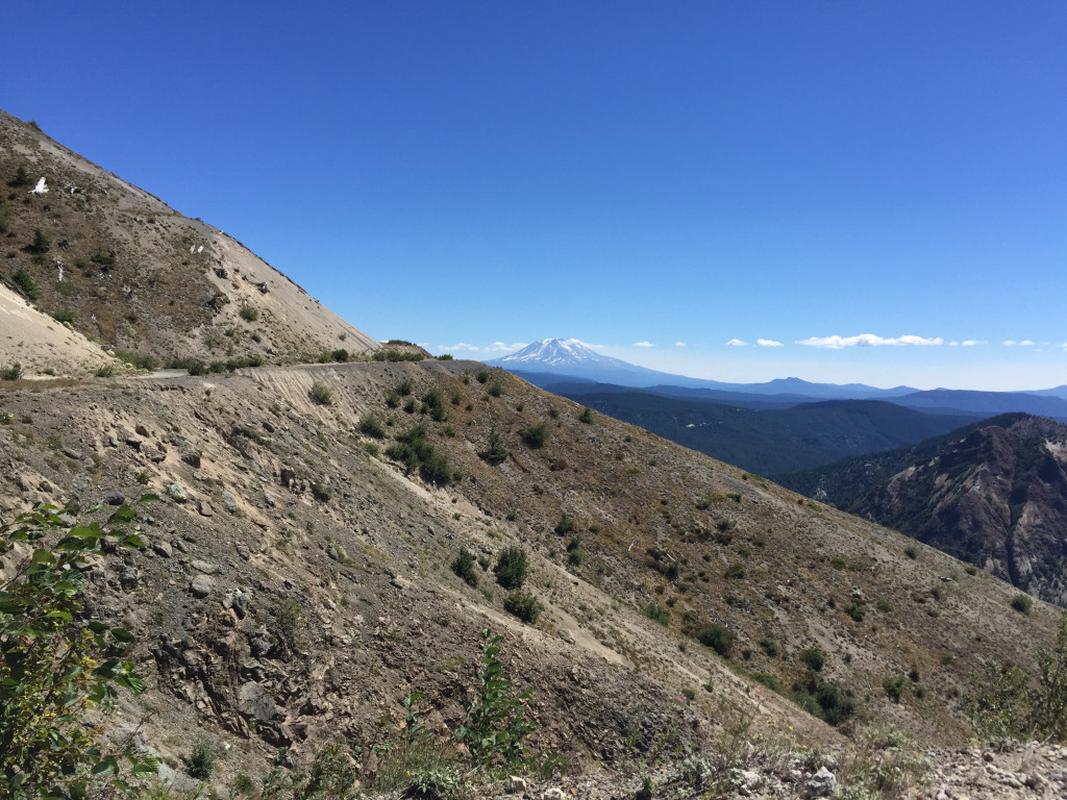 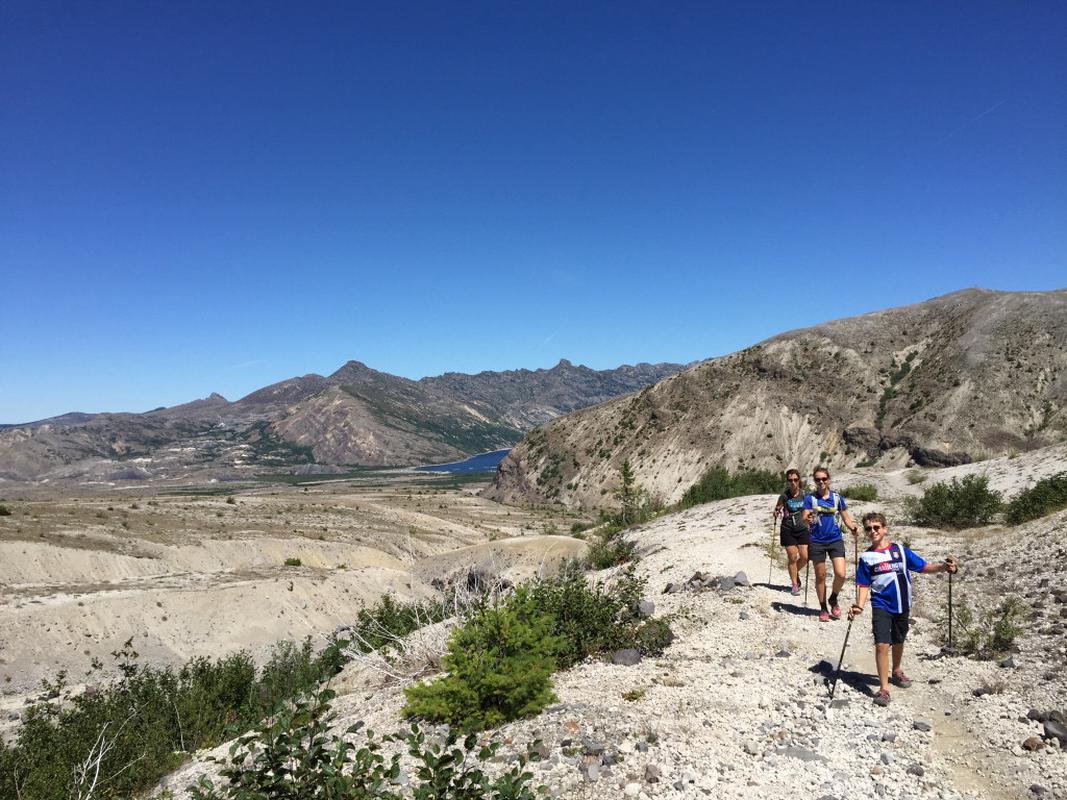 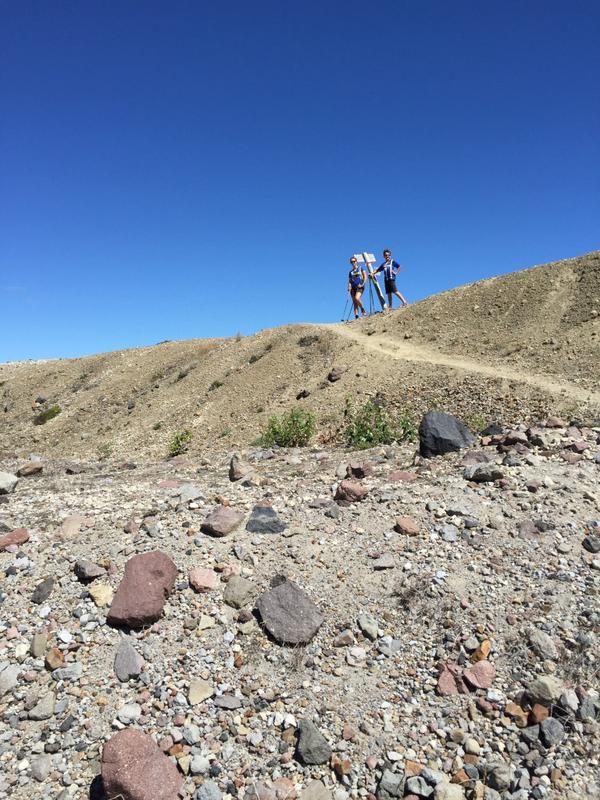 I took this panorama after starting the return hike from Loowit Falls. The falls is far left, with Spirit Lake at right and a view of Mount Adams at far right.

By the Numbers: Windy Ridge to Loowit Falls

I used the Gaia GPS app for my iPhone to track this course, and subsequently loaded it into Strava using the GPX export. Total mileage for the day was 8.85 miles (1,157 feet of gain as reported by GPS) with just over 3 hours of hiking.

This is Hike 28: Windy Ridge in 100 Hikes in Northwest Oregon & Southwest Washington. There's a great description and map in there. Enjoy!