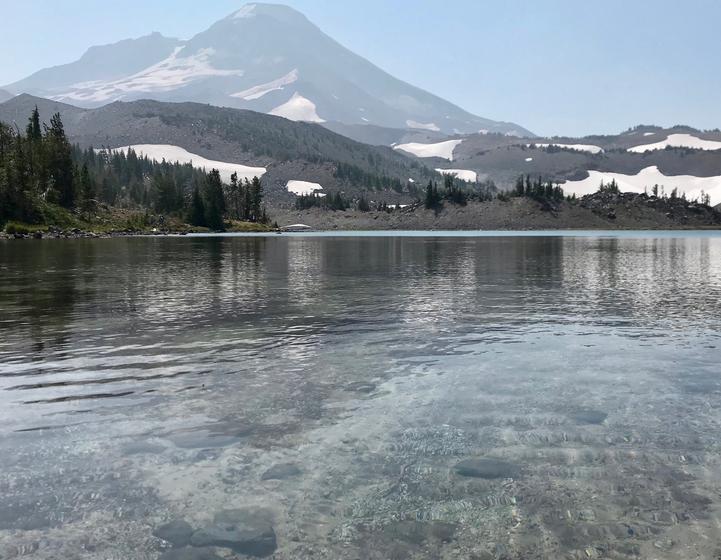 We kicked off our week in central Oregon with a hike from Pole Creek Trailhead to Camp Lake. Amy and I had hiked this ourselves in 2015 while the kids were at ski camp. It was definitely a highlight then, so we wanted to share it with the kids. We were staying in Sisters, and the drive to Pole Creek is super short from there. We arrived shortly before 10 and got started up the dusty trail, once more traversing several miles of what remained from the Pole Creek fire in 2012. The hulking remains of once-majestic trees stood out starkly against the sky. The skies were so blue the last time we hiked this, though today there was a lingering haze from the California wildfires. 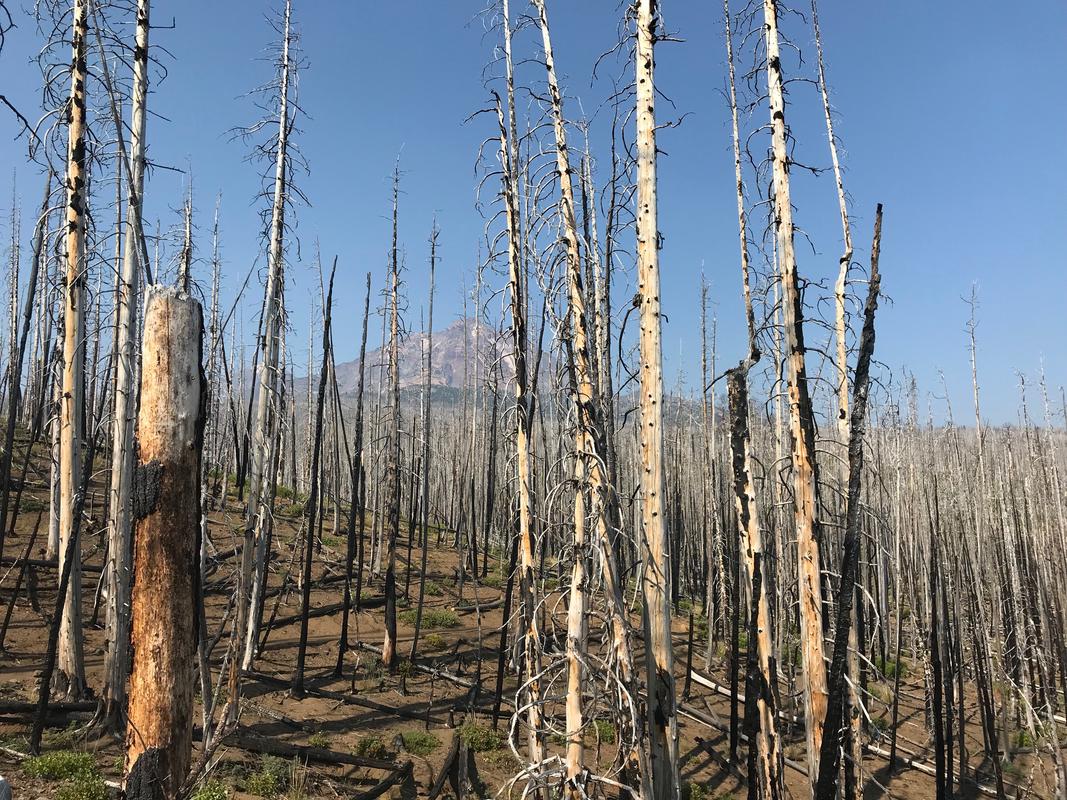 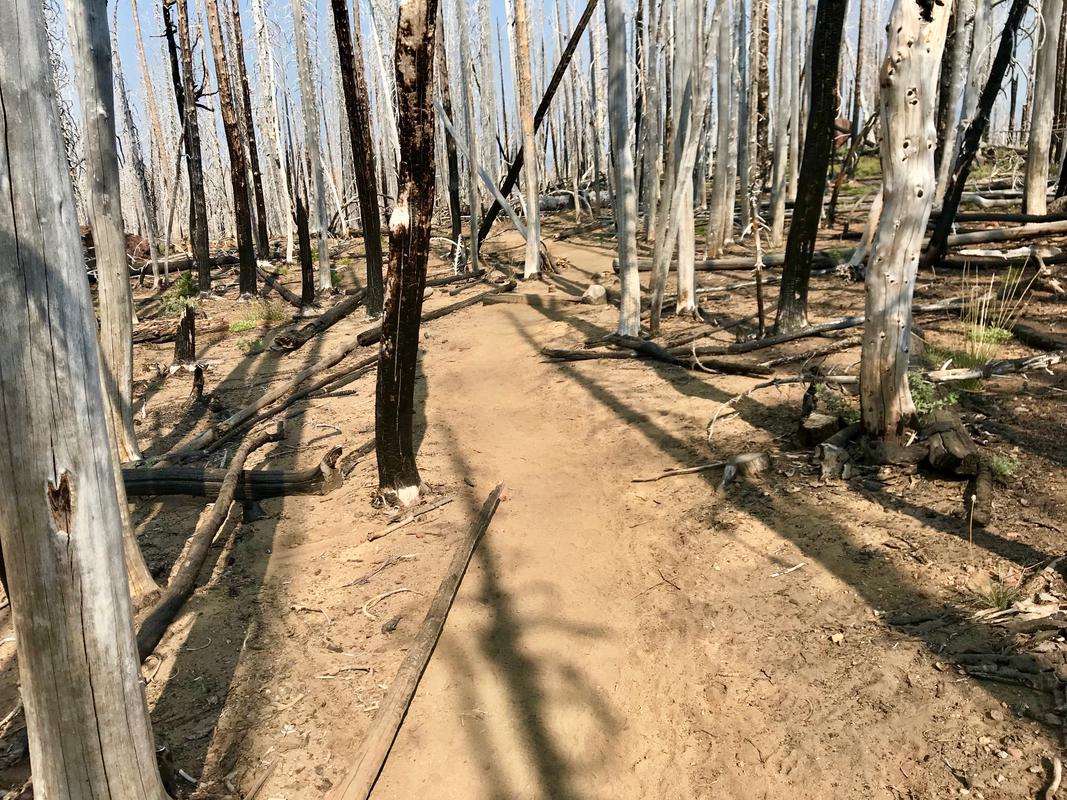 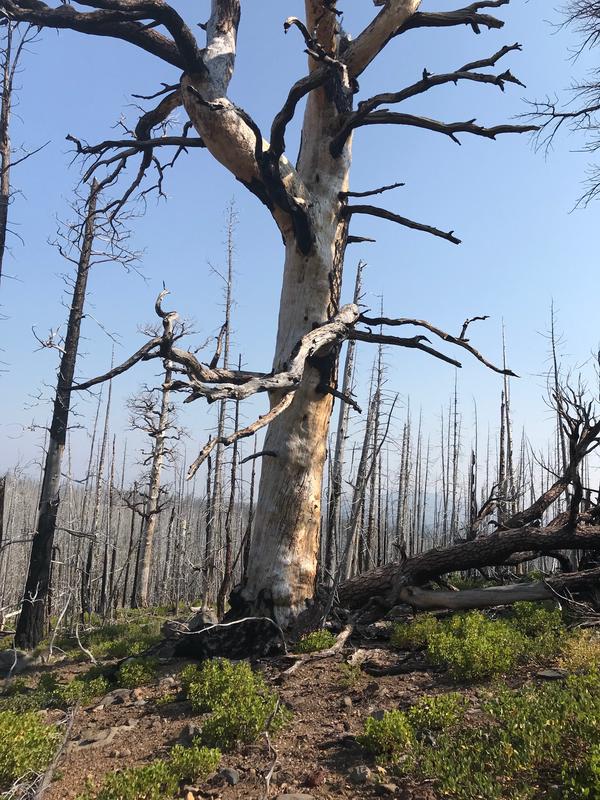 At the junction with the Green Lakes trail, someone had stabbed a fork into the top of the sign to hold up a pair of lost sunglasses. It was an odd juxtaposition made even more peculiar by the presence of a slice of cured meat at the business end of the fork. Before seeing the skewered meat, I dubbed the spot “shady fork.” 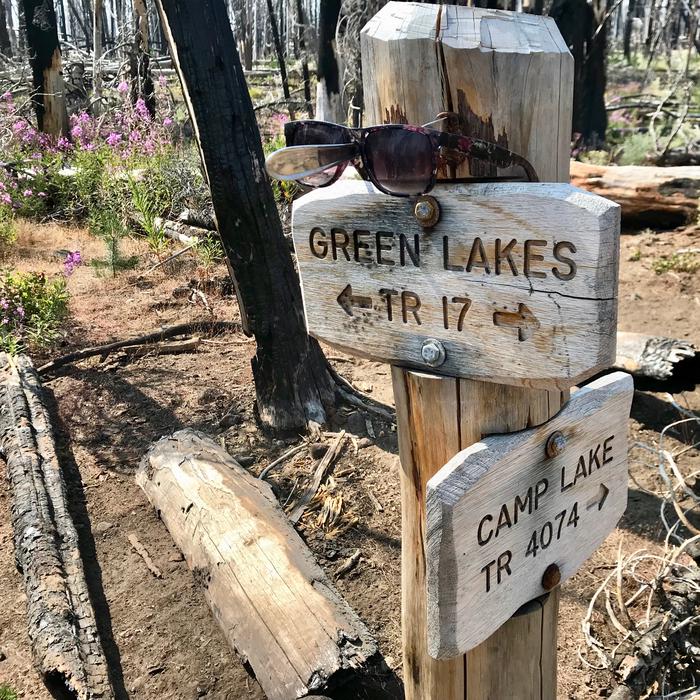 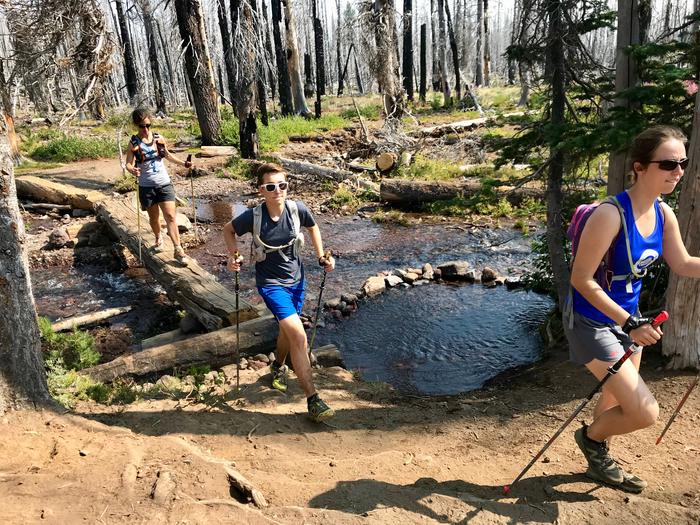 Stream crossing just under 2 miles into the hike

Xander ran out of water just 4 miles into the hike. We were all being super conscious of drinking enough, but he took it to an extreme, blowing through his 2L supply in just a few hours. We took a break at the Whychus and I used our Sawyer Mini to filter water. It really worked great, and I think secretly Xander was happy to have some cold water in his pack. 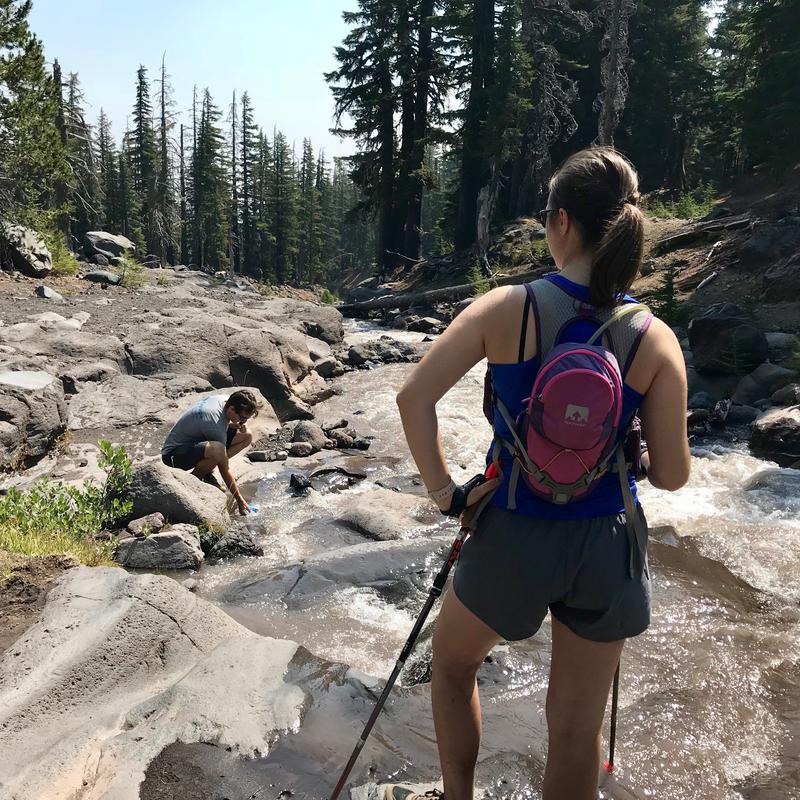 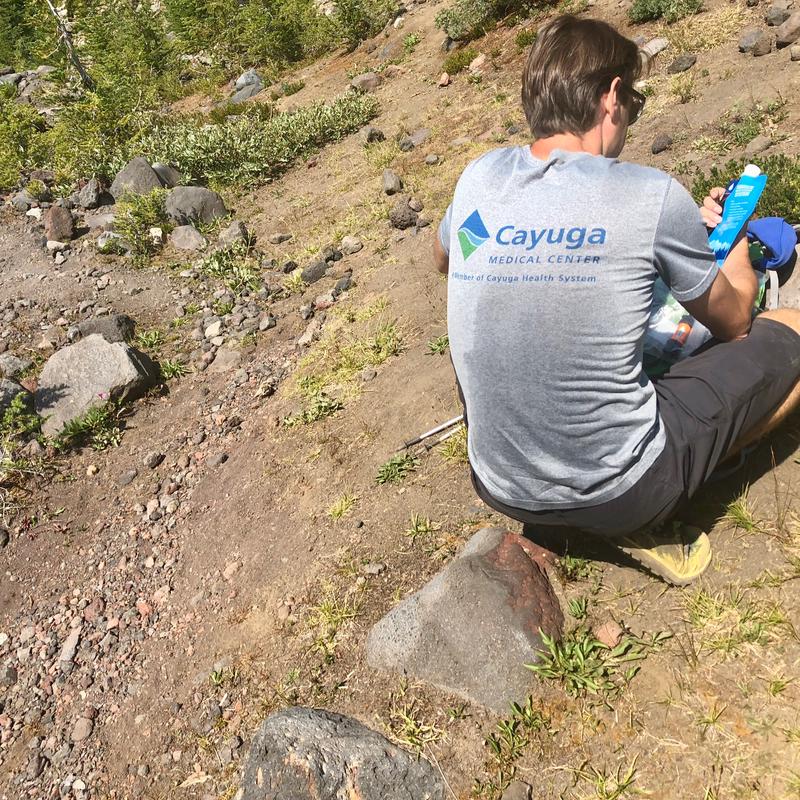 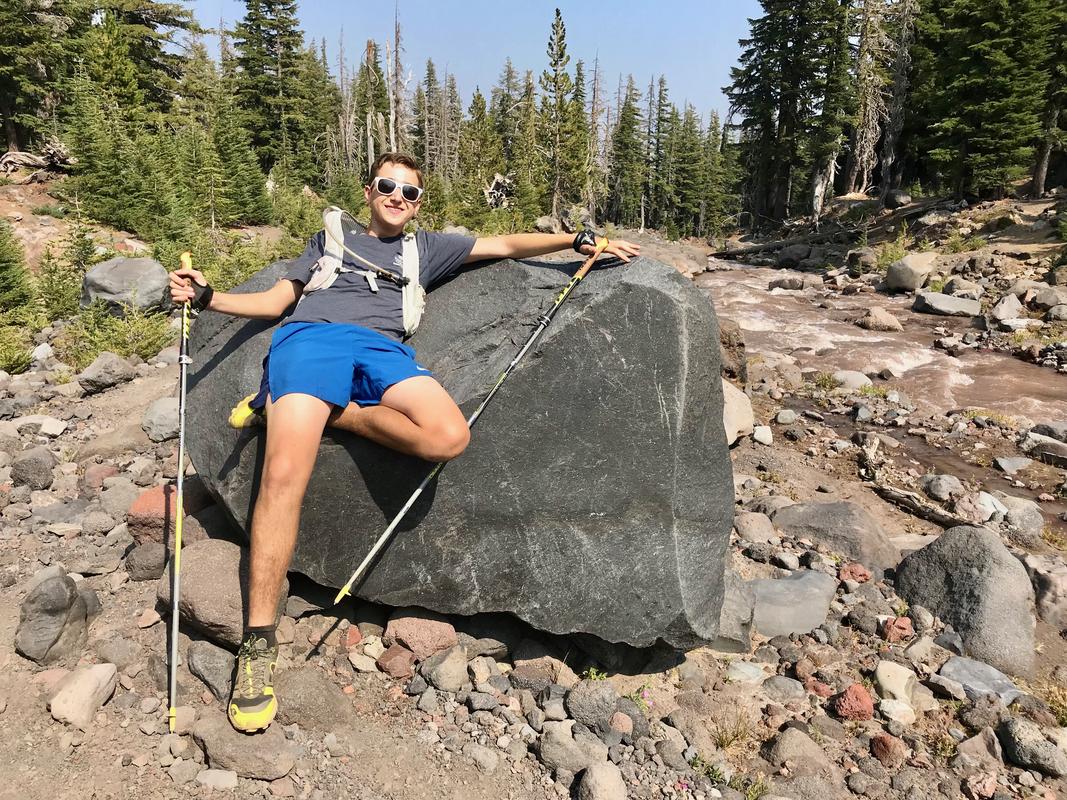 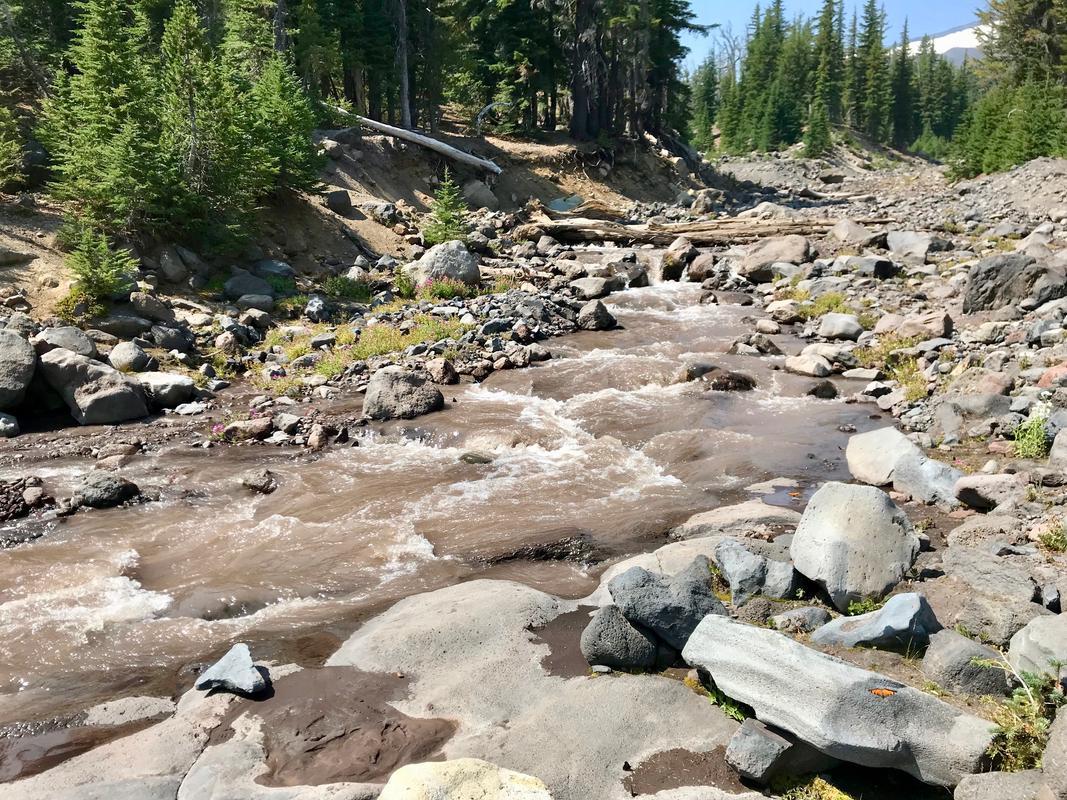 We encountered a pair of US Forest Service rangers along our route. This was the first time in the many years we’ve been hiking out West that we’ve seen them, let alone been questioned. They chatted with us for a few minutes before asking to see our self-issued permit. They thanked us for filling it out and asked if we knew the rules, specifically those around campfires. Of course we did! Everything is so dry, so they were being extra vigilant, making sure that everyone they encountered that fires were not permitted anywhere.

It was really cool to see the kids’ faces when we arrived at Camp Lake. It’s an amazing sight to see: a beautiful crystal-clear body of water seemingly at the foot of South Sister. We sat on a weathered log that warned visitors with a “No Camping on Beach” sign. We enjoyed this trip’s standard hiking fare: baby carrots and Juanita’s tortilla chips with hummus. Amy and I both waded into the refreshingly cool water, and I took some time to filter more water for our return trip. Butterflies were plentiful on this hike. One lit on a pack and stayed there until we shooed it off. This gave Xander plenty of time to take some cool pictures of him. 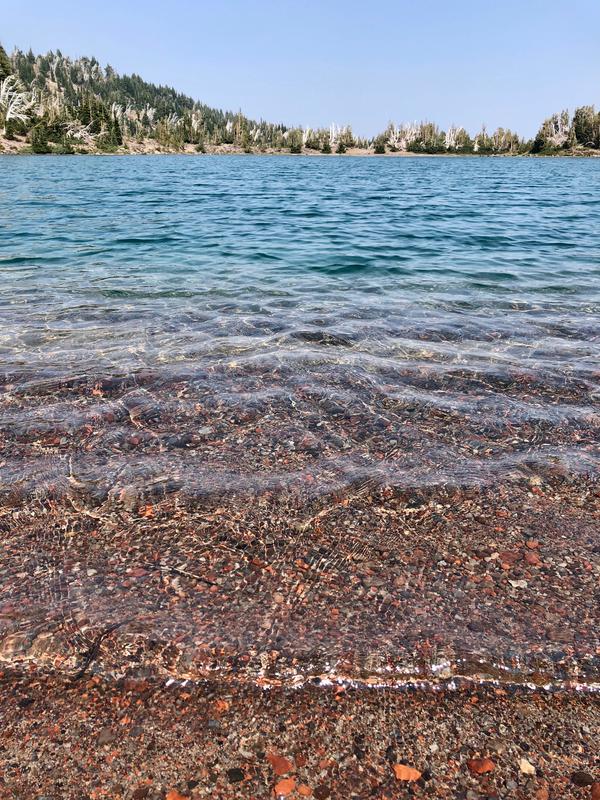 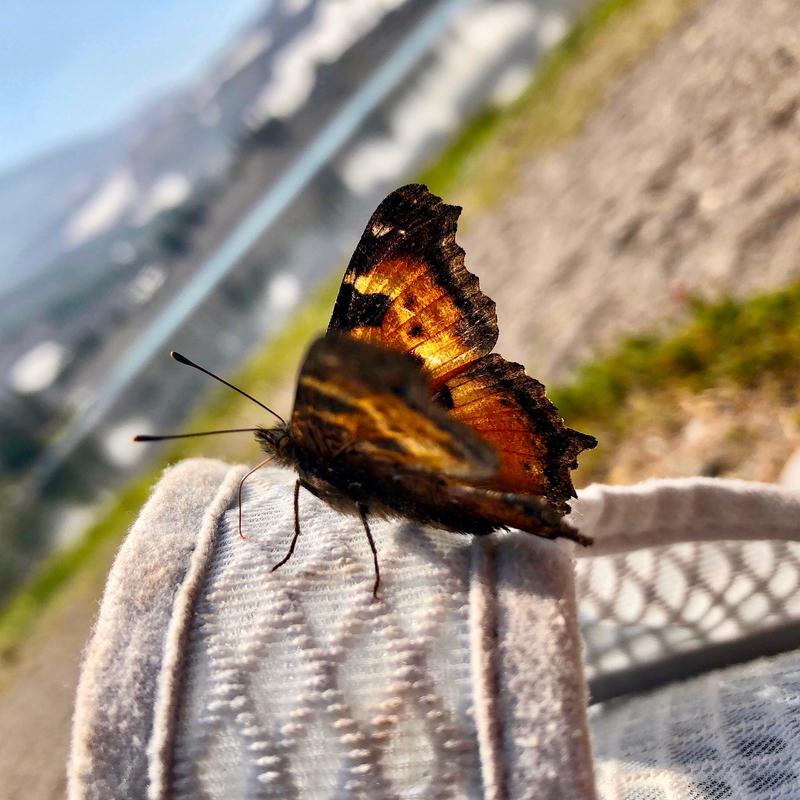 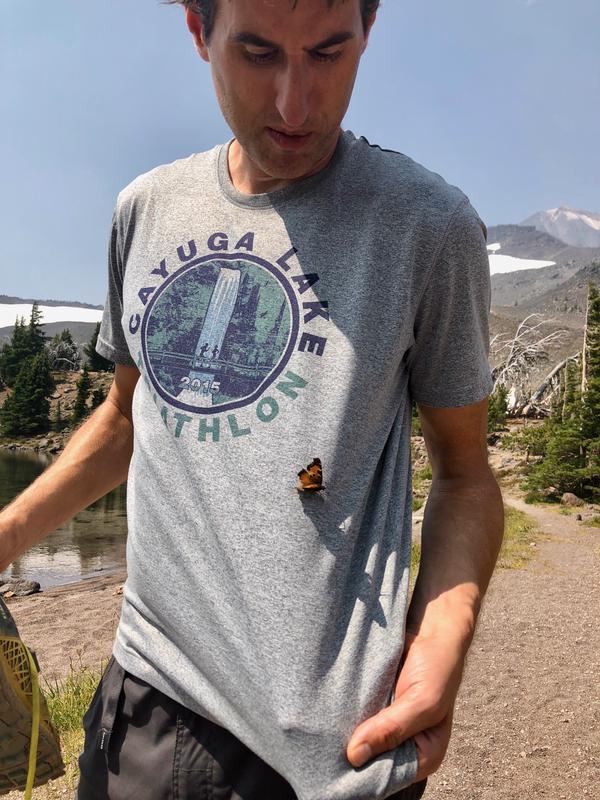 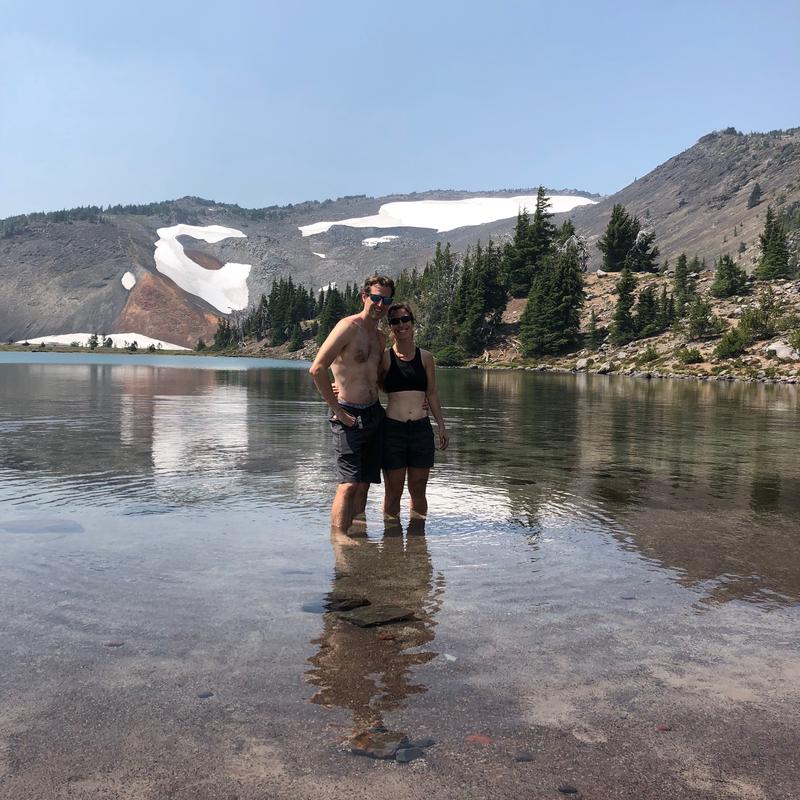 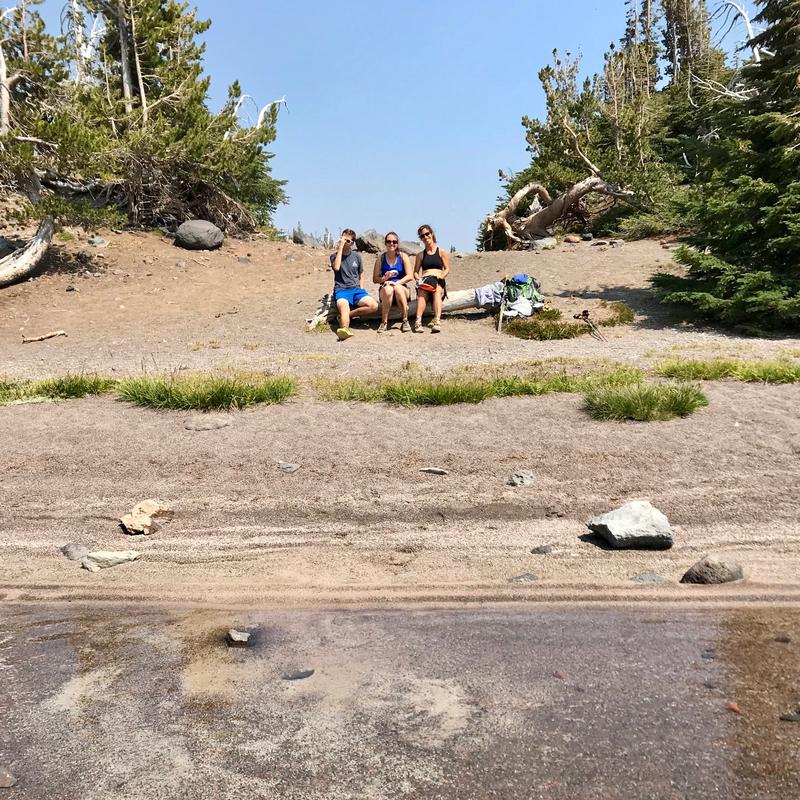 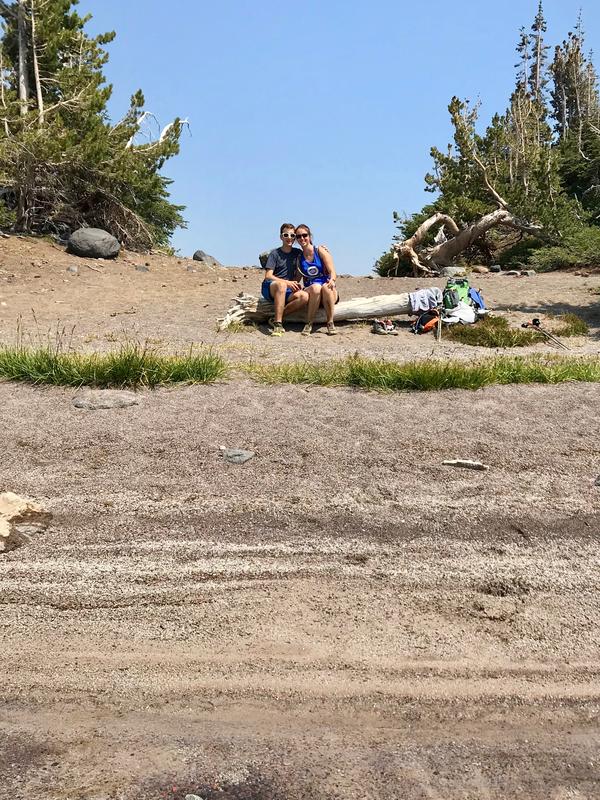 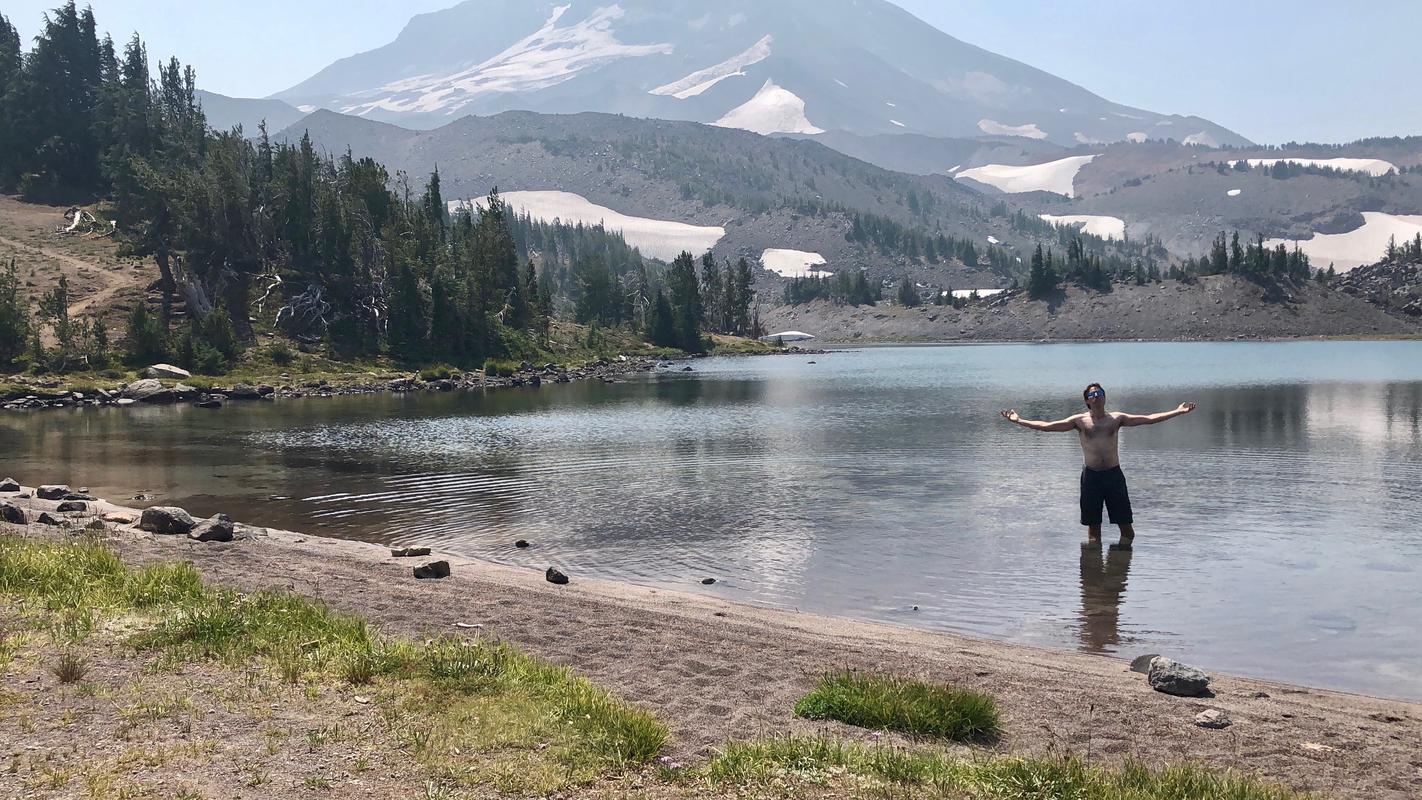 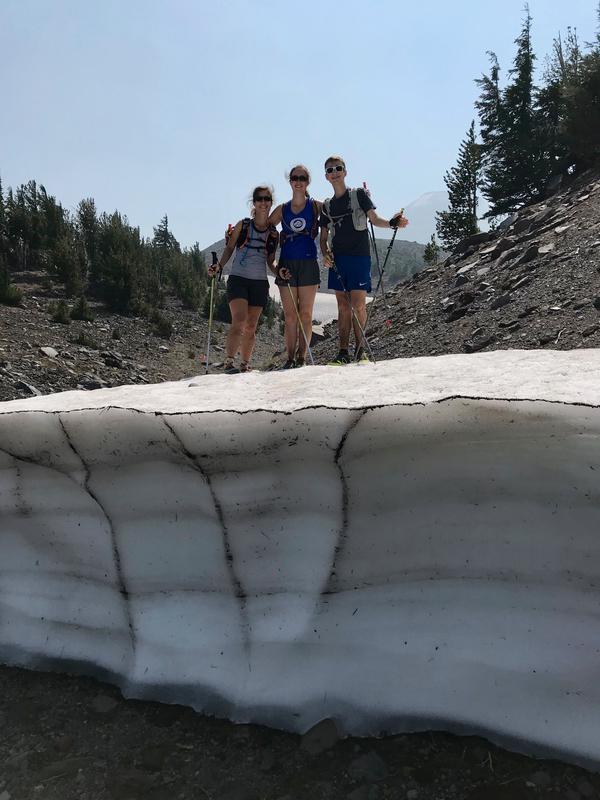 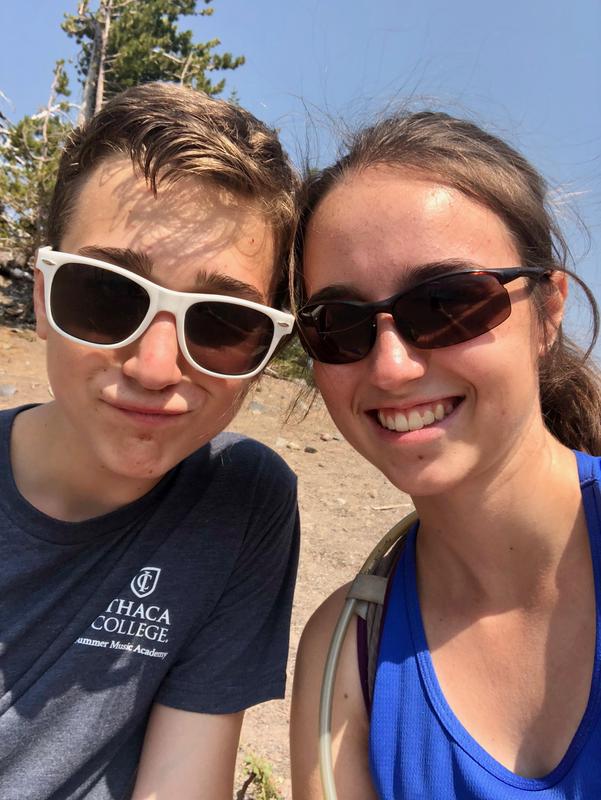 After we were done relaxing, we took off on a rambling route around Camp Lake, trying to find access trails to some of the Chambers Lakes that lay beyond. We found the well-worn trail near the end of our traverse around the lake and decided we’d seen enough. The official trail to Chambers Lakes ascended a steep ridge, and we still had about 8 miles to hike out to the trailhead again. 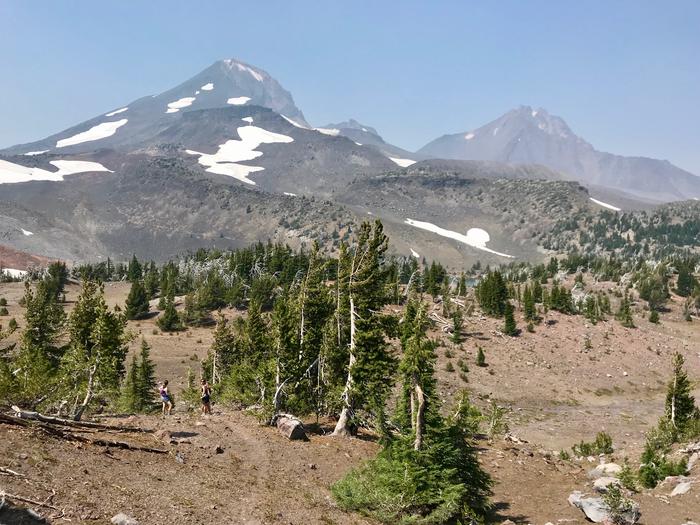 We tried to keep a good pace on the way back since the day was getting long. We were treated to the sights and sounds of several rock falls high atop Middle Sister. 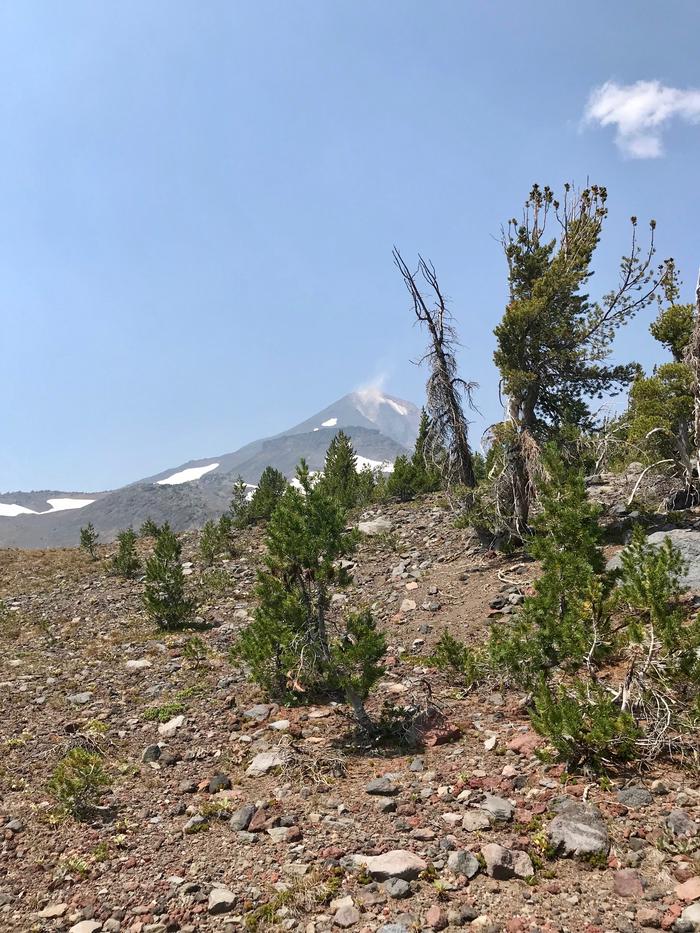 When we got to the Whychus crossing again, the water was clearly flowing higher and faster due to the accelerated glacial runoff from the midday heat. Check out the video above for some cool footage of that. We crossed carefully and descended the remaining miles back to the car. 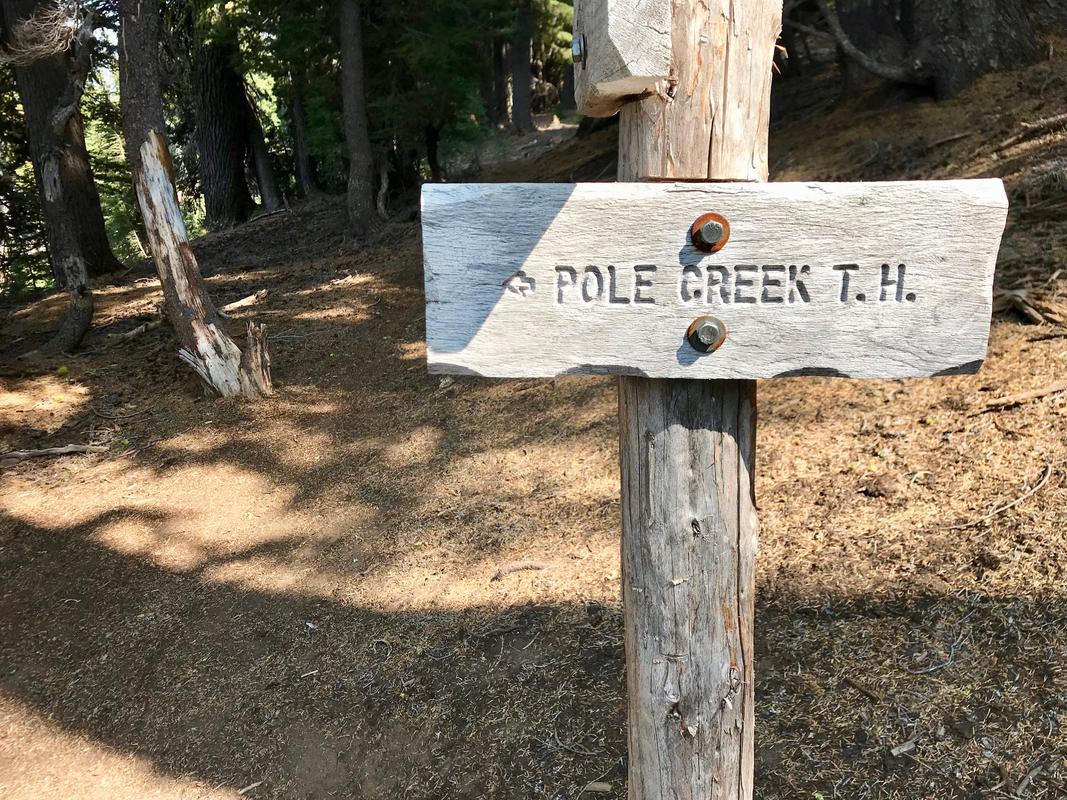 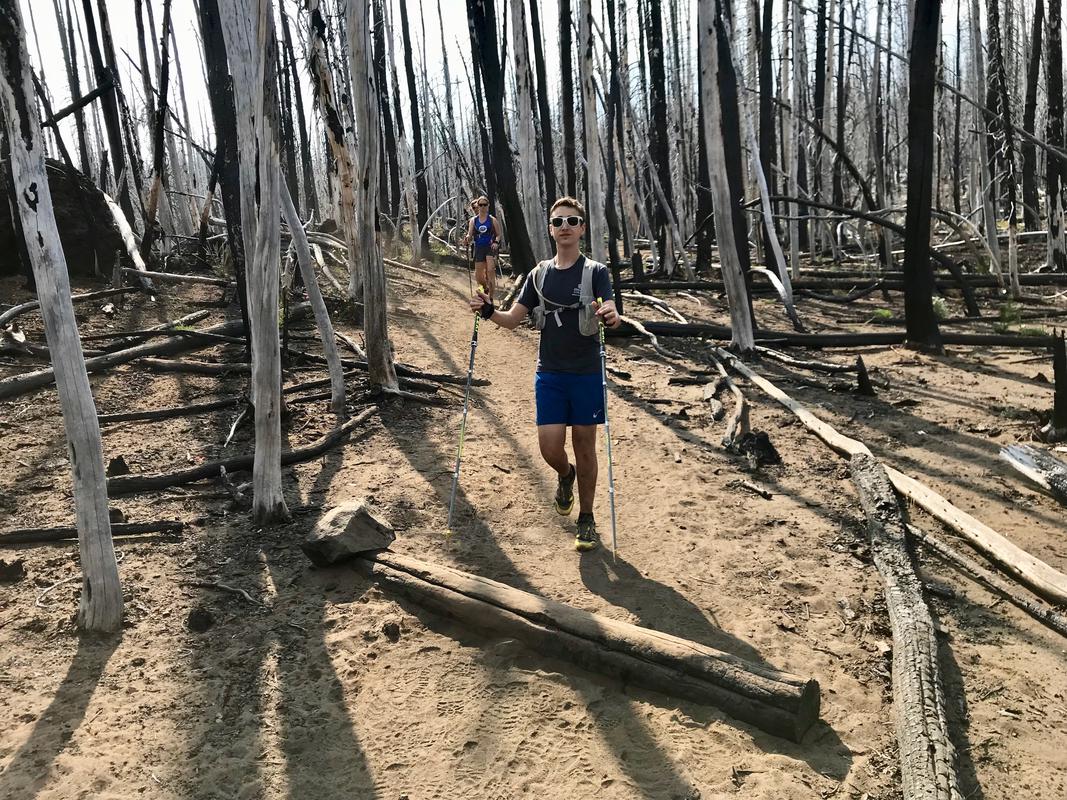 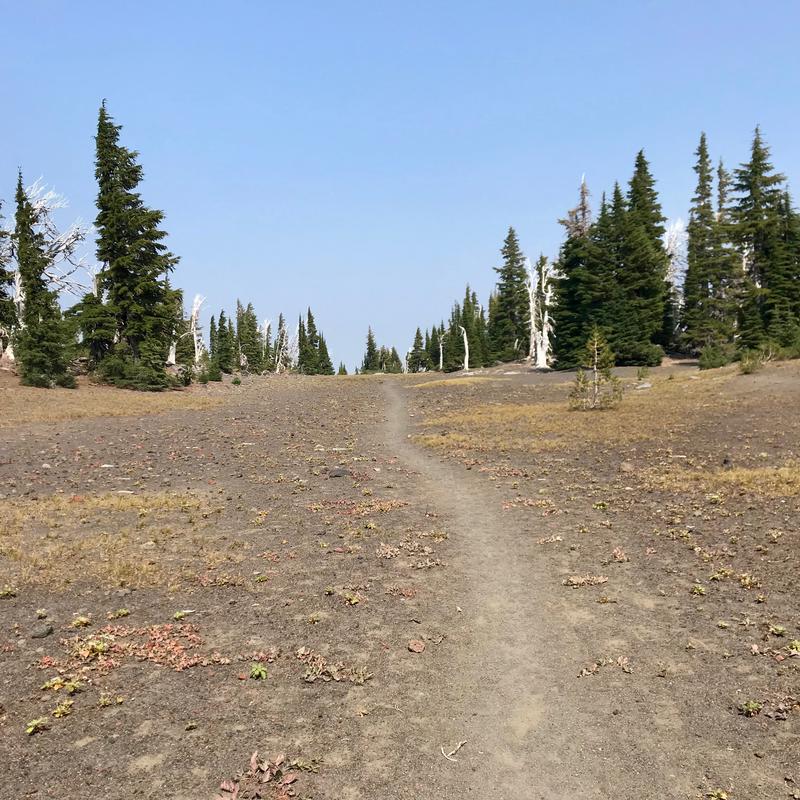 We drove straight to Twisted Juniper Coffee to treat ourselves to huckleberry smoothies, but sadly they closed at 5. We were just a half hour too late. Our palates would have to wait a few minutes for us to get cleaned up. Amy, Xander and I used the pool and hot tub at our place before showering. We all headed out to Hop & Brew in Sisters for some refreshing pints (our favorite post-hiking beverage) and a platter of loaded nachos. While there, we struck up a pleasant conversation with two Canadian bikers who were passing through town. We finished off the evening with some ice cream from BJ’s on Main Street. 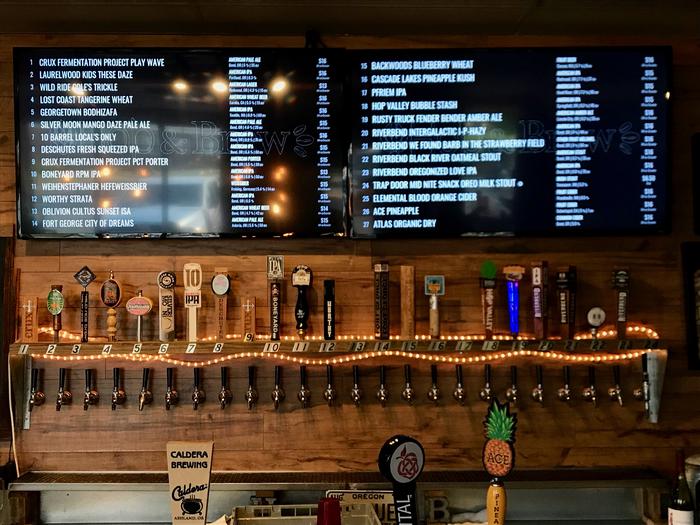 The menu board at Hop & Brew, our dinner stop