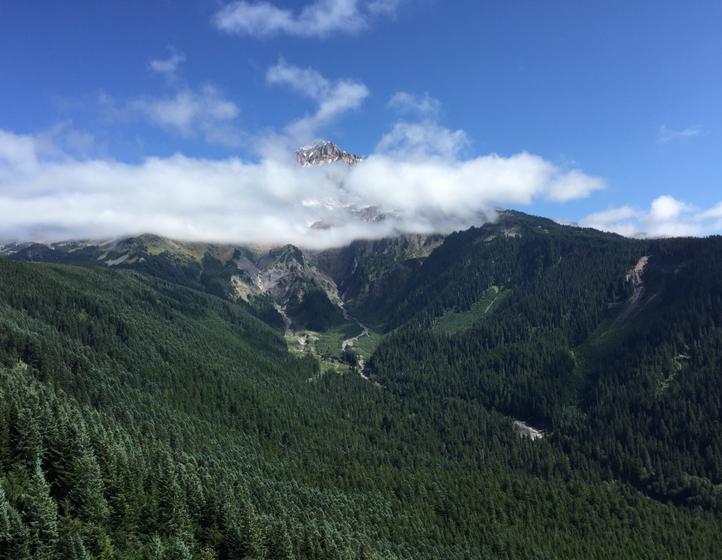 This was the last major hike of our Oregon trip. With some pretty good distance and elevation for the kids and four stream crossings (two of them I'd describe as epic), it would also turn out to be the most memorable. We planned to hike to Ramona Falls, then make the ascent to Bald Mountain via the Timberline Trail.

We got an early start, arriving at Ramona Falls' typically busy parking lot before it was too full. We loaded up our packs and enjoyed a mostly level hike to Ramona Falls. We first had to negotiate an unmarked wash, the result of heavy flooding, and I was grateful that Sarah and Adam were with us to find the way. We took the more scenic route to the Falls, tracing the mossy banks of Ramona Creek. I was fascinated by the scenery in here, stopping to take a few pictures of the "shag carpet" of moss. Before long, we were at Ramona Falls proper, taking a few family pictures with Adam and Sarah before leaving the throngs behind for the longer portion of our hike. 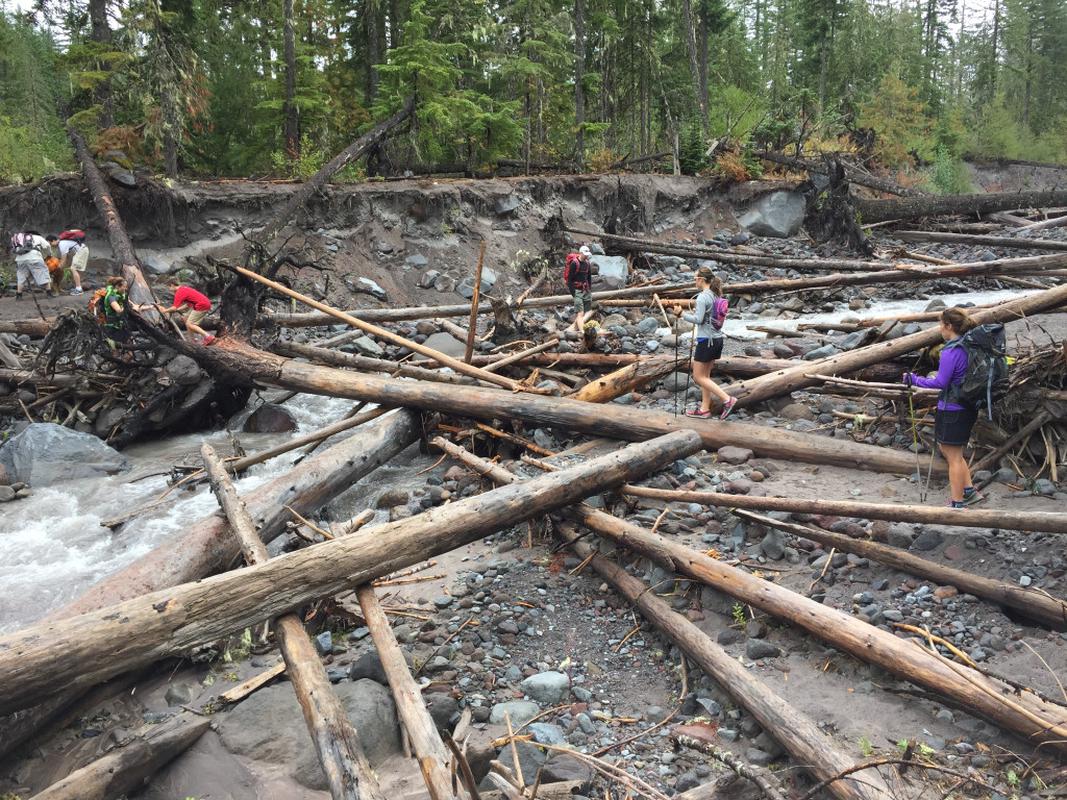 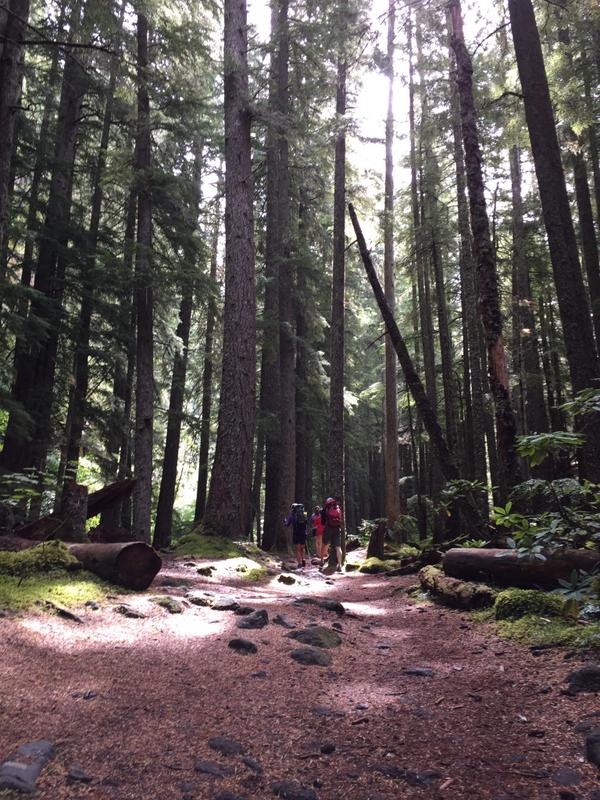 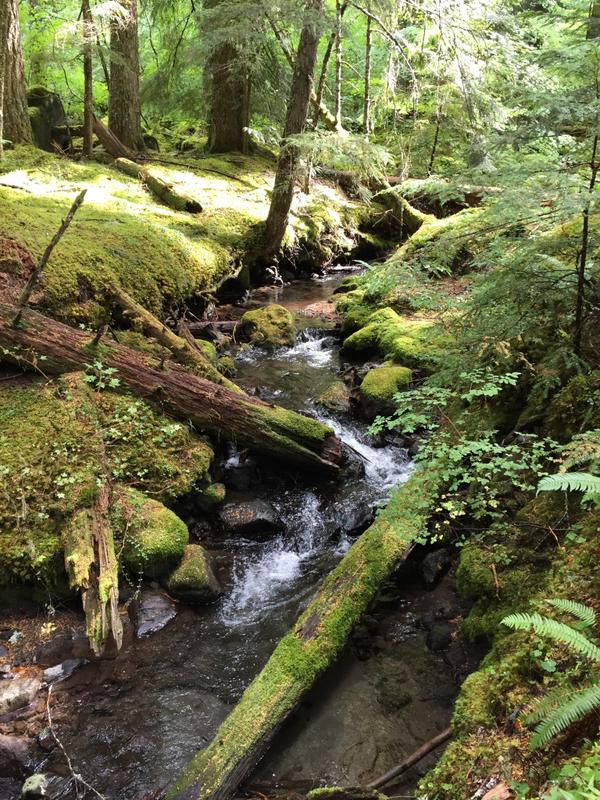 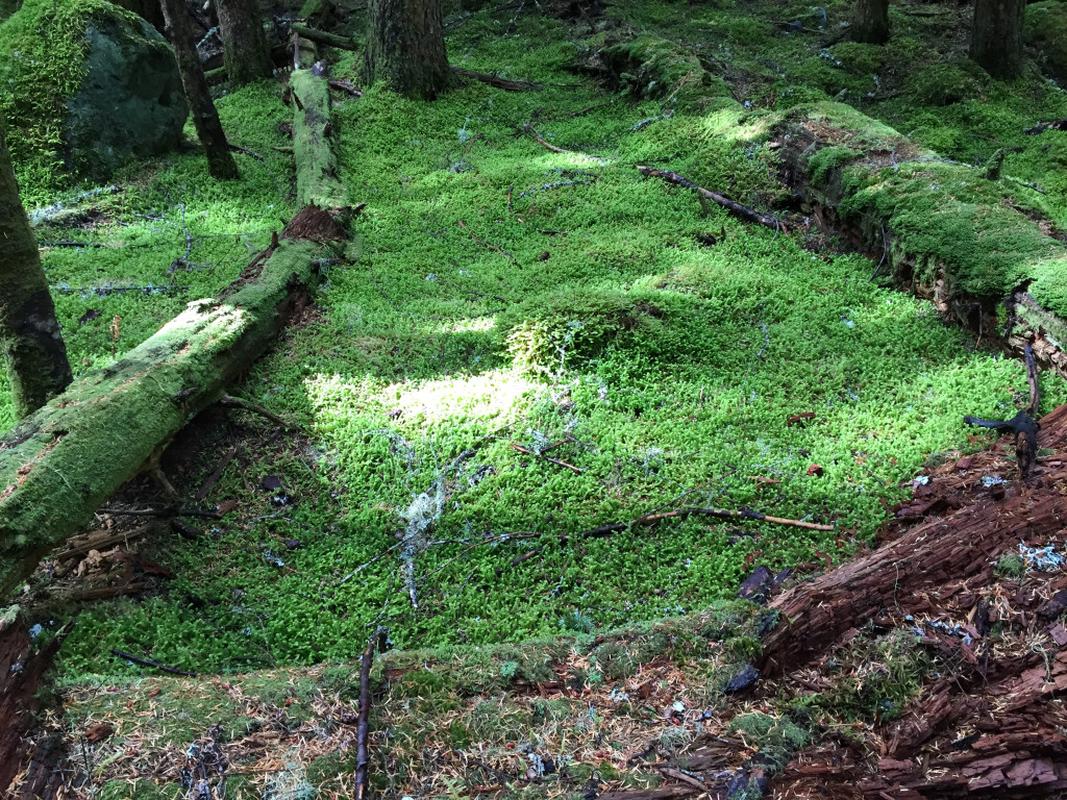 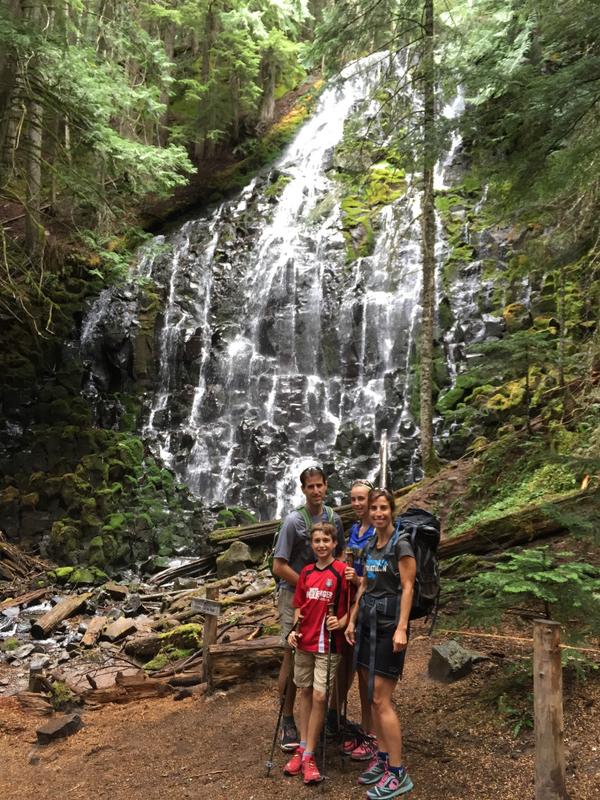 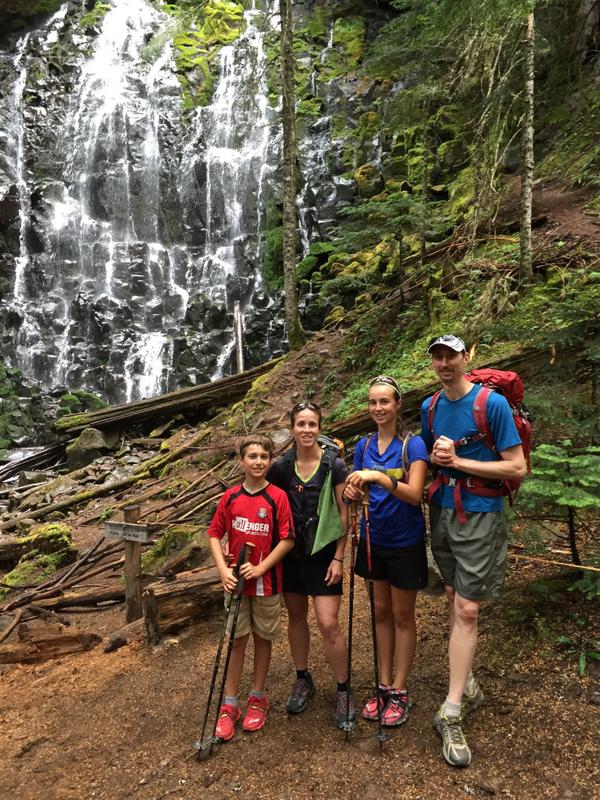 We started climbing from the base of Ramona Falls, and after .6 miles of uphill trail came to a junction with the Yocum Ridge trail. We had considered this as a destination for the day, but chose Bald Mountain instead. We took the wandering path around the ridge on the Timberline Trail, pausing periodically to look at some of the amazing foliage, like thriving Devil's Club with leaves bigger than a child's torso with thick, spiny stems.

Some of the Timberline Trail was close to washing out, with very steep slopes up to our right, and steep slopes down to our left. When water crossed the trail, we really had to watch our footing! The kids really handled the exposure well, though, and soon the grade lessened and we knew we were approaching Muddy Fork.

Now that I read the book closely, after doing the hike, I see how we could have been warned in advance. However, given the dryness of the PNW this winter and summer, we thought we'd be in good shape for the stream crossings. Boy, we were wrong! The guide book says that Muddy Fork is "a milky, glacial outwash river." It continues to note that the "bridgeless crossing is tricky in June and on summer afternoons, when snowmelt swells this two-branched torrent." Hmm, them's fightin' words!

We would pass over three branches of Muddy Fork, according to my topo map. The first branch was interesting, as we could traverse on rocks or relatively unstable, small trees. We all seemed to make it across in our own way, as it was not that great an expanse. Shortly thereafter we came to the next fork, and it was almost laughable. Just a few hops on rocks and we were across that. We were so confident that the first branch had the most potential for trouble, and we felt good about that until we reached the roaring third branch. This picture says it all ... oh my! You really needed to be there to see how swift and deep this water was. 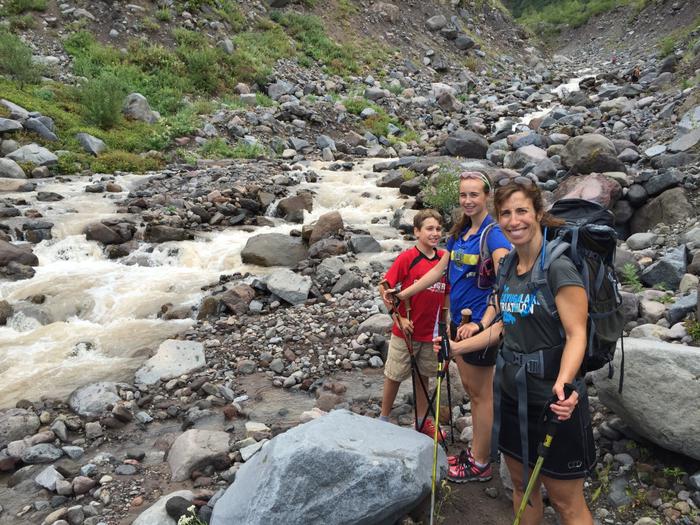 How are we going to get across and stay dry?

This was by FAR the most exciting part of this hike. It's true, the most challenging things are often the most rewarding. We spent the greater part of an hour trying to figure out a dry way across, mostly because of the kids. Rock crossing upstream? Downstream? How about throwing rocks in to make a path? Nope, water's too swift. Adam and I found a crossing downstream that would be suitable for adults with long limbs, so we took it and scouted the other side for materials. We found some logs that we could carry and tried to lodge them in place to no avail. 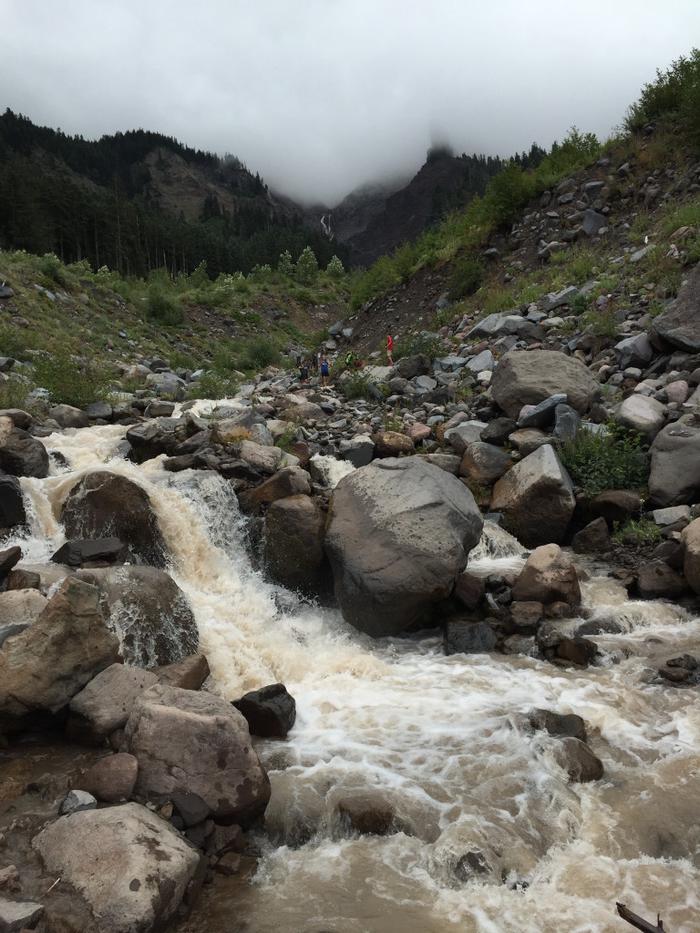 A tall order to build something for a dry crossing.

The scenery here was fantastic in the meantime. Hood was shrouded in cloud, and periodically we'd see the tip of a waterfall further upstream. Adam and I decided that we'd go with a backup option, using the crossing that we'd taken. We've both gotten our feet wet before, and I had most recently done a 50-miler with 8 creek crossings, all of them getting my shoes and legs sufficiently soaked. We stood at strategic points in the stream, making sure we were stable at all times with our hiking poles, and filled in the gaps to help the rest of our party across. The steps were complex, especially for little arms and legs. Hands down on the first rock with feet on the bank, then step to a small rock with your left foot. Right foot to the rock your hands were on, then a BIG step to another rock with your left foot. Then another manageable skip to the opposite bank.

Elizabeth went across first, and then she got to work taking pictures with my iPhone, which I had left over on the far bank while scouting materials. I think Amy's face says it best in the last shot, that while we were stressed about this, the plan worked out just fine and we were relieved to make it across! 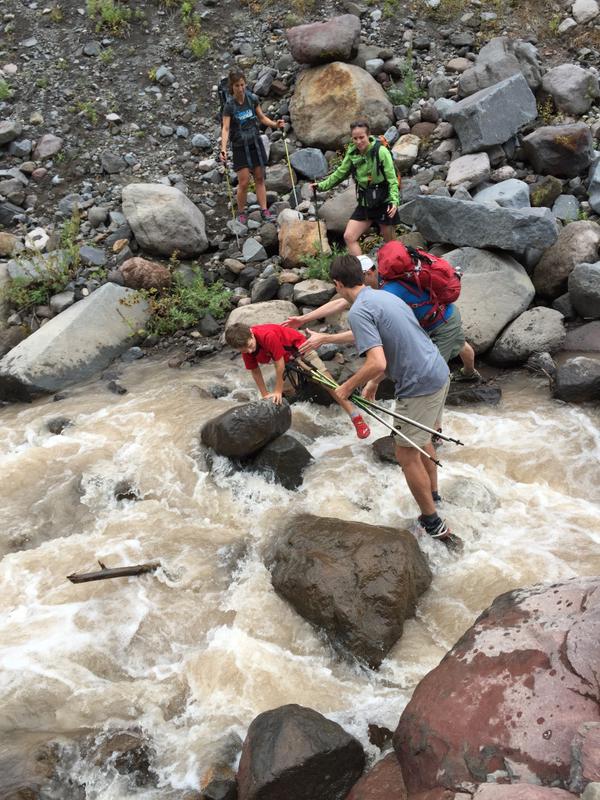 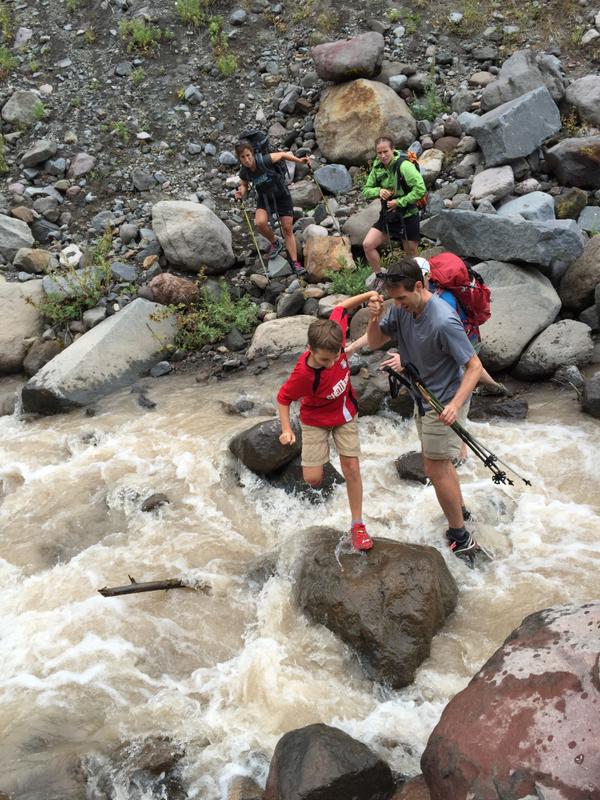 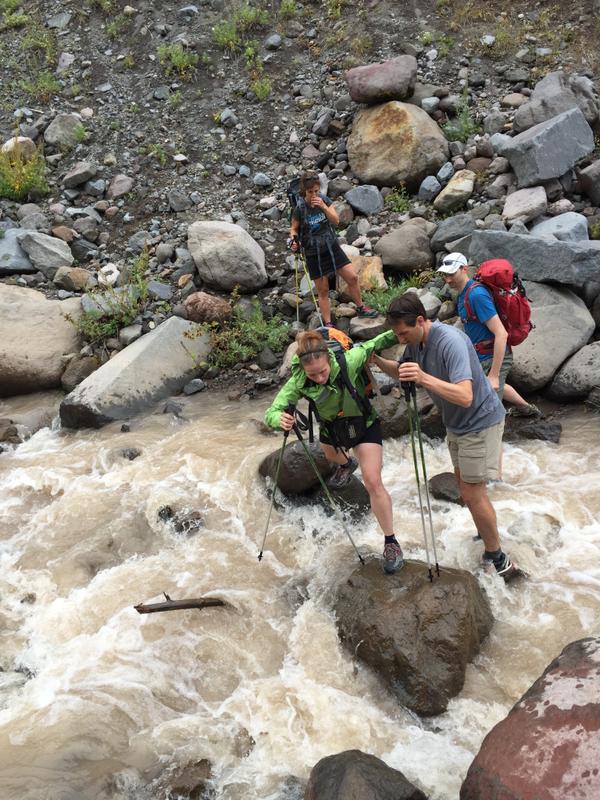 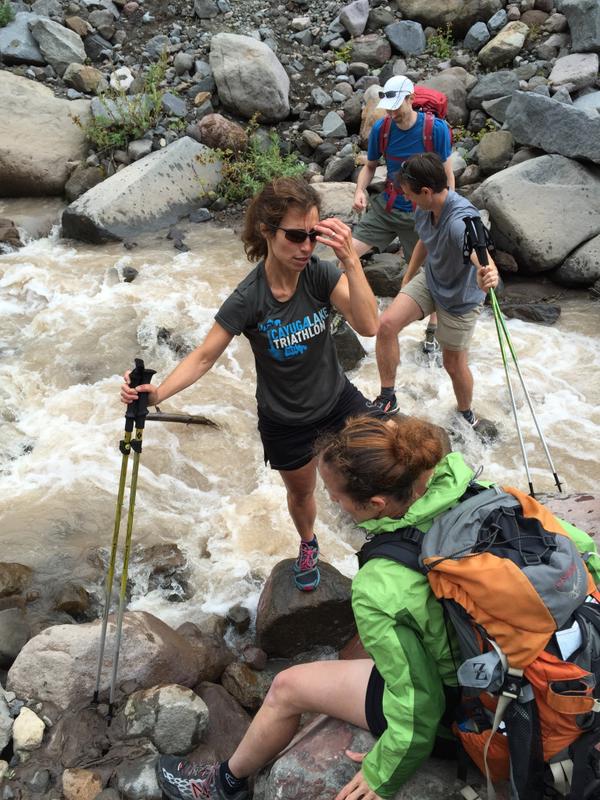 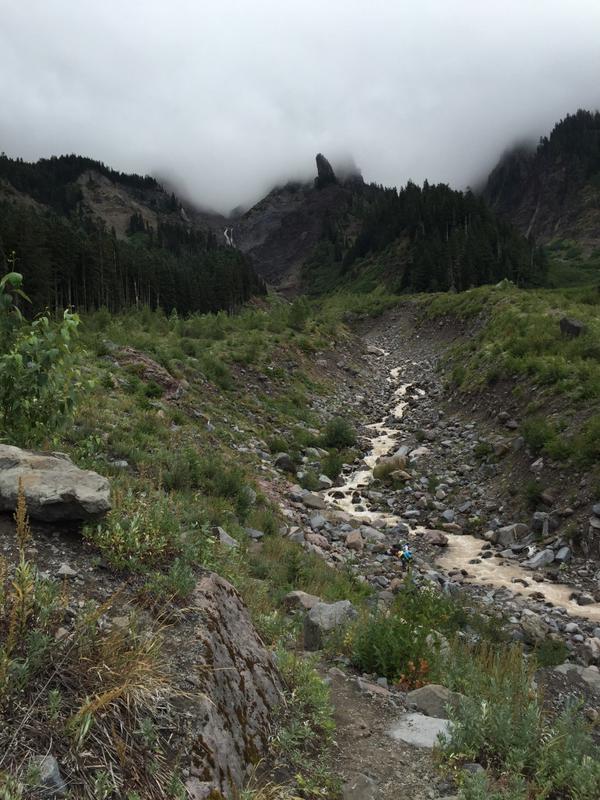 We took a break on the other side, enjoying some snacks while Adam and I squeezed out our socks and laid them on rocks to (partially) dry. At one point, we saw some hikers go by who were prepared with water shoes for the crossing. We totally could have done that, but didn't think of it. It was entertaining nonetheless to watch them dutifully change their shoes on both sides of Muddy Fork, and even more entertaining to watch them cajole their dog into making the crossing without being carried (which he did with aplomb!)

We were off to Bald Mountain now! We hiked the remaining few miles to a beautiful overlook, taking in the peak of Mount Hood, now only partially clouded. The miles and stream crossings behind us were still fresh in our minds, but it was totally worth it. 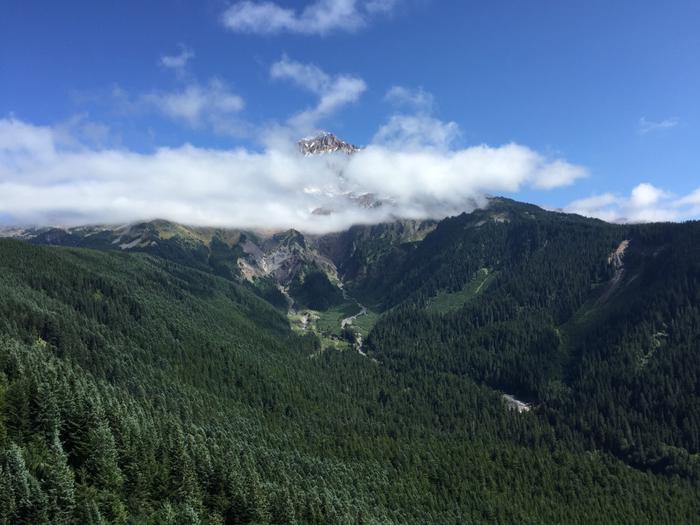 We could have stood here for a very long time, taking it all in. The sun was shining, and the quietness and nature around us was quite a scene. 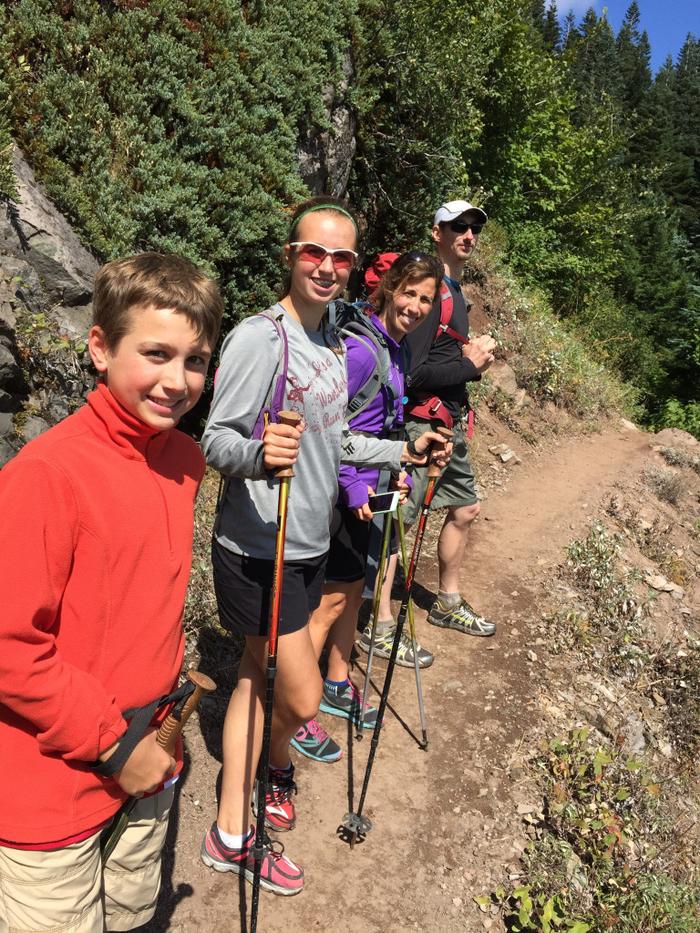 The clouds were mesmerizing, and I took a time lapse of the orographic lift.

As Steve Jobs used to say at the end of Apple keynotes, there was just one more thing to come. After descending two miles down the PCT back toward the start of the Ramona Falls trail, we came to Muddy Fork again, much farther downstream. There used to be a nice bridge here, but we believe it was a casualty of flooding. Instead, we found a felled two-trunk tree that someone had rigged rope to on the top side. We could shimmy across with our feet on the bottom trunk and our hands on the rope. My only concern was for Xander, since his relatively little legs had quite a reach to get down to the bottom log. We went across together, though, always with three points of contact on this improvised bridge. Soon we were across and enjoying the brief hike back to our cars! 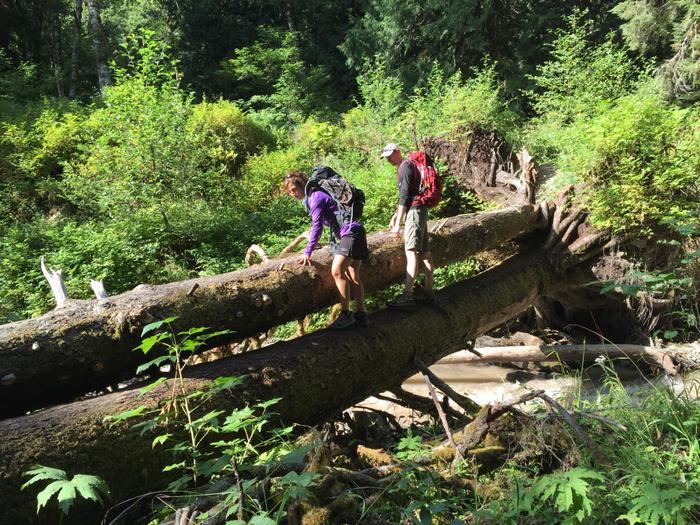 Amy and Adam on the third creek crossing

By the Numbers: Ramona Falls to Bald Mountain

I used the Gaia GPS app for my iPhone to track this course, and subsequently loaded it into Strava using the GPX export. Total mileage for the day was 15.25 miles (2,574 feet of gain as reported by the track after importing into Strava) with about 5.5 hours of hiking. With the stream crossing and subsequent break, we spent 7:45 on the trails, though.

This is Hike 69 (Ramona Falls to Bald Mountain) in 100 Hikes in Northwest Oregon & Southwest Washington. There's a great description and map in there. Enjoy!