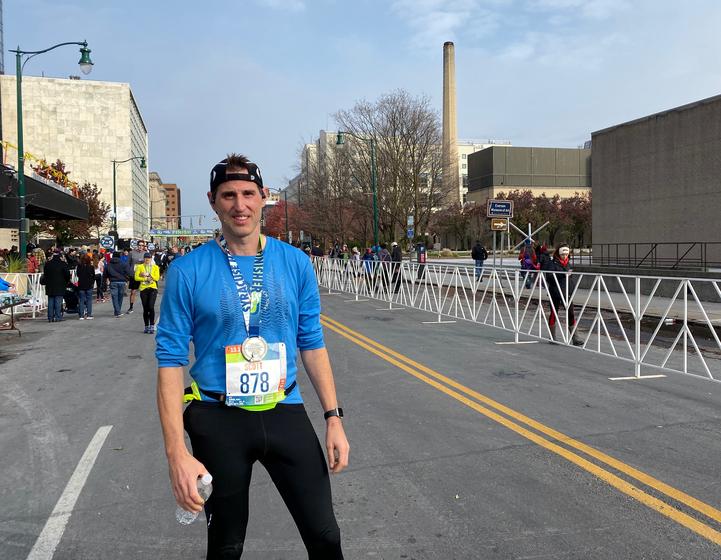 I last set foot on the Syracuse Half Marathon course on April 3, 2016, when I raced in a frigid, wind-whipped, and seemingly post-apocalyptic world. It was a late-season blizzard that earned that year the moniker “Syracrazy.” It was Syracuse, it was extreme, and it was crazy, indeed. Race organizers changed the race month to November, perhaps to minimize the chance of epic snow. Would they dodge the bullet this year?

I jumped mid-plan into a “Run Less, Run Faster” schedule I’ve followed before. I had 10 weeks to prepare, starting September 3. The plan promises faster running through less mileage, though the formula has you run those miles fast: 3 key weekly running workouts include intervals, a tempo run, and a long run at half marathon pace minus 10 or 20 seconds, depending on the distance. Tough stuff, but I hit most of the prescribed distances and paces. I felt good and prepared going into the race, though my weekly mileage averaged between 25 and 30 miles.

Amy wrote a fantastic post about her race, including how we went from a double-date to a family event over the course of the year. Long story short, we traveled to this race as a party of four! Elizabeth and Xander would also be along for the ride. We drove up to Syracuse after Xander’s shift at Finger Lakes Running Company and efficiently picked up our race bibs and souvenir jackets at Fleet Feet. It was a cinch to check in to our hotel near Armory Square. We headed out in search of dinner.

Pastabilities quoted a 2-hour wait for food, so we wandered around the corner in search of something more immediate. We didn’t have to walk far before we happened upon The Hops Spot. Their menu was posted outside, and a quick glance told us we’d do just fine there. I enjoyed a craft beer and “3 Degrees of Kevin Bacon” — a grass-fed burger from Black River Cattle Company in Sackets Harbor with crispy pork belly, bacon aioli, and bourbon bacon jam. It was delightful. 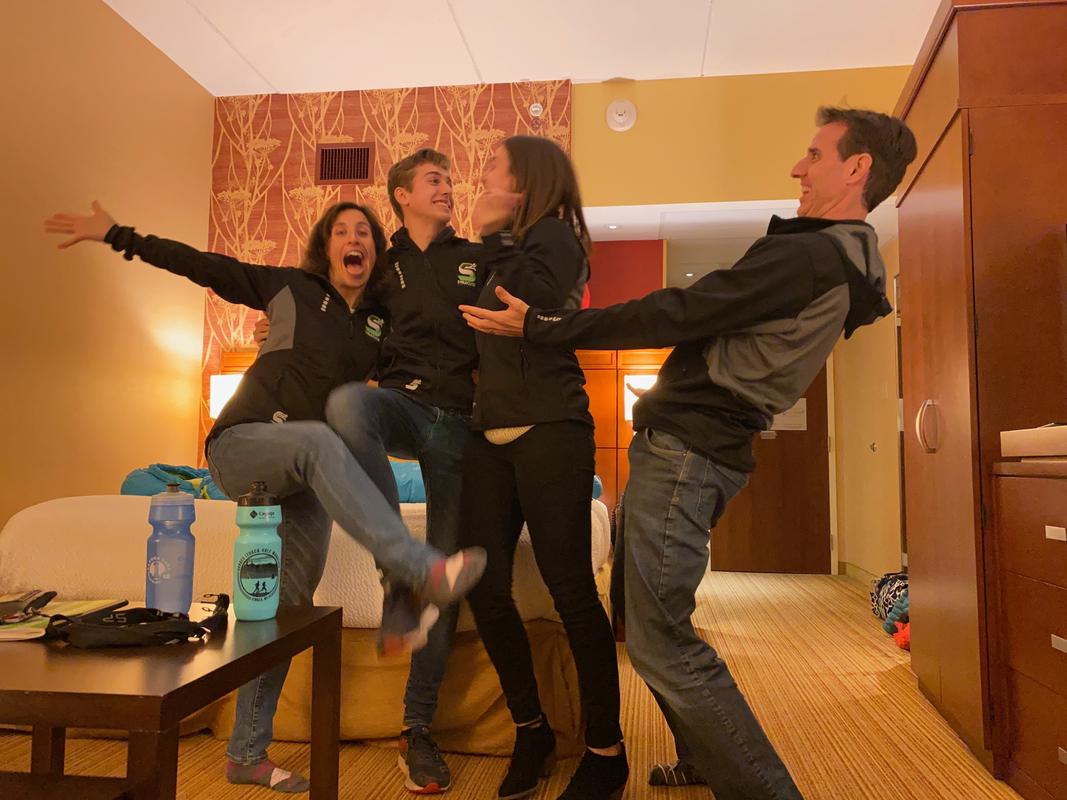 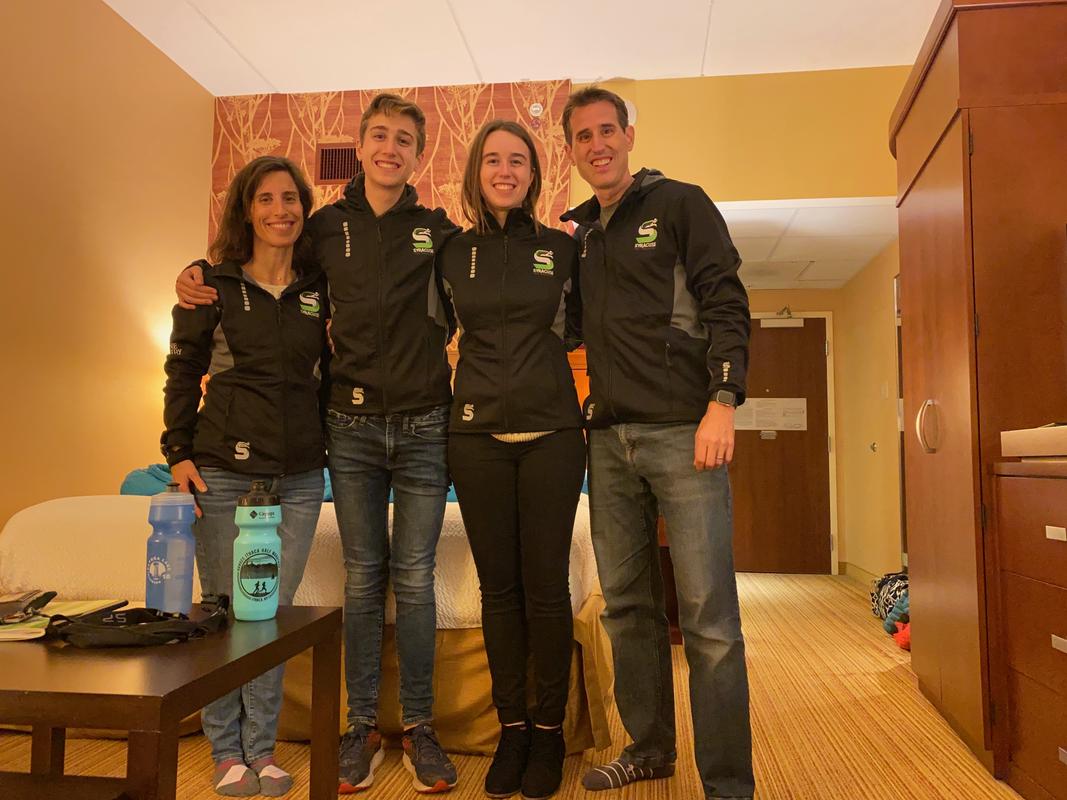 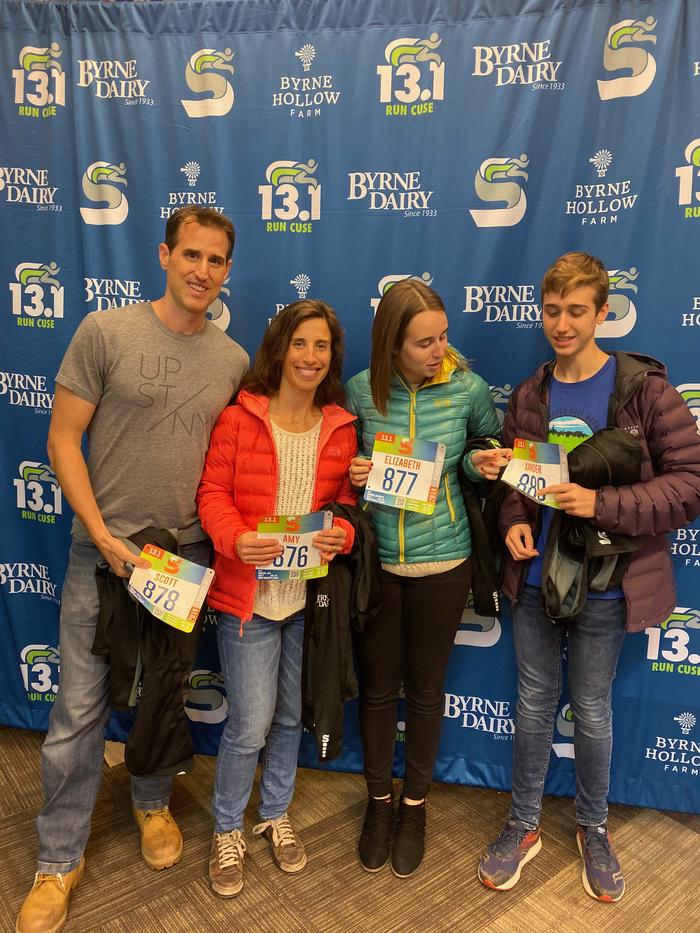 My full stomach and the prior weekend’s Daylight Savings Time switch conspired to make me rather sleepy. As I read a few pages of my Stephen King book, I felt my eyelids grow heavy. I was grateful that others in the room felt the same way. We turned the lights off at 7:30, giving me a nice, long rest before morning.

I like to eat 2 hours before racing, so I read for a few minutes before downing a Honey Stinger waffle, trail mix, and a spoonful of peanut butter at 5:45. I was recently accepted as a Honey Stinger ambassador for 2020, so the pre-race food was apropos. I paired it with a few cups of in-room coffee while we watched the prior evening’s news. 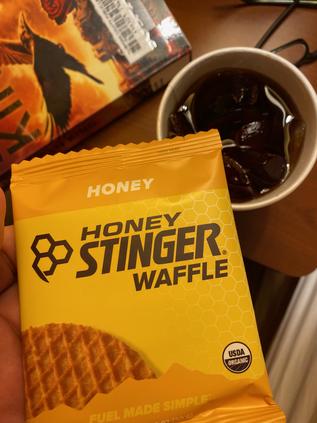 I carefully pinned my race bib on my favorite long-sleeve New York City Marathon tech shirt. I opted for no windbreaker, since the temperature was borderline. Right around 45 degrees, I’d run in short sleeves and shorts, and today’s start was in the high 30s. Xander asked me if I was going for a PR. I set my half marathon personal record on the Gorges Half Marathon course in Ithaca last year. Half of that course is downhill, so it made sense I’d run a good race there. Could I do it today? Was I prepared? I didn’t know, but the prospect of a solid race made me smile.

Our hotel was just a short walk from the start line. We half-walked, half-ran to get there, since it was rather chilly. I knew I’d be fine once I got warmed up, though. I made my way to the 5-7 minute mile section of the corral, where I found plenty of space to stretch and patiently wait for the start. 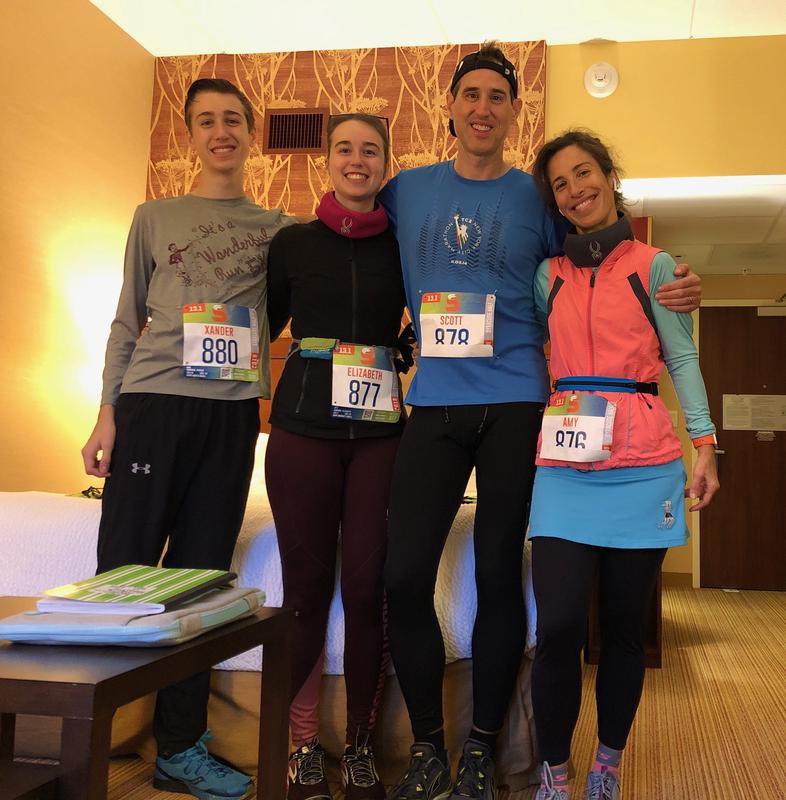 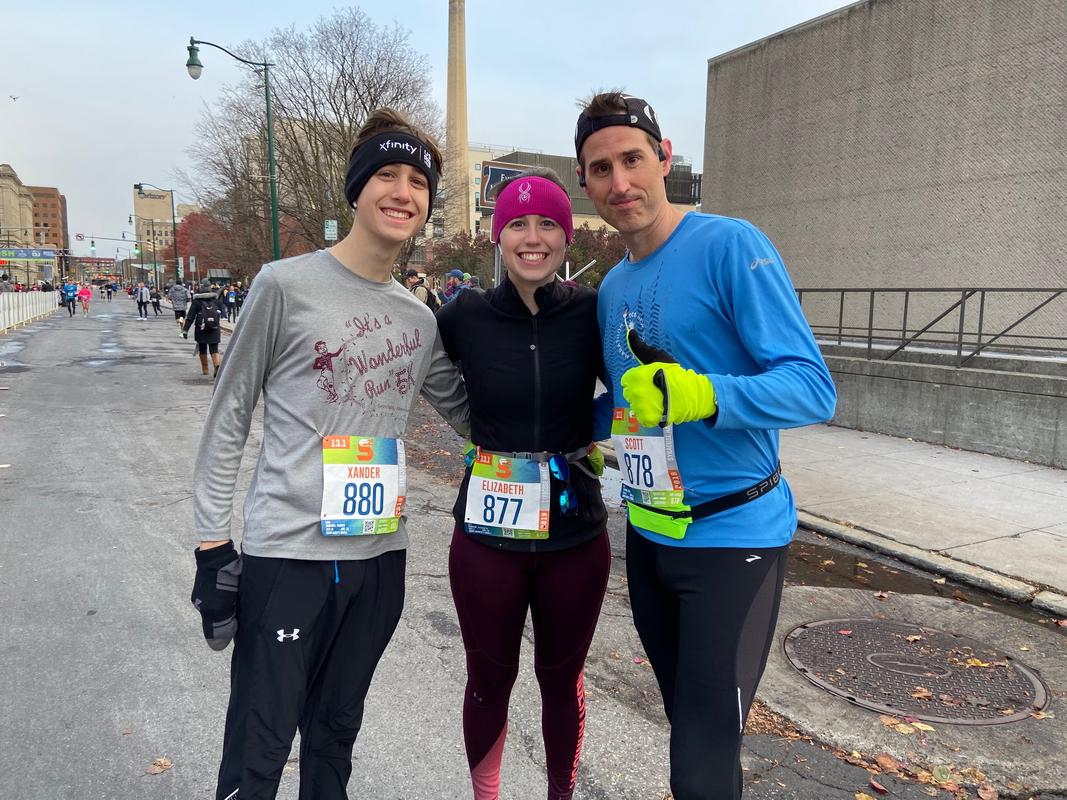 As is my (bad) habit, my pace was a little too quick off the starting line. I feared I’d pay for it later in the race, especially given the elevation changes. The first challenge was a 2-mile uphill stretch on James Street, but I crushed the pace with my fresh legs. I smiled and pointed as fellow running friend Jason Fingerman shouted encouragement at the first aid station. I took my gloves off as I crested the top of this hill.

The middle miles of the race were a genuine struggle. At just 4 miles, I told myself I was almost ⅓ through the race. The uphill sections kept coming and pacing felt difficult. I vacillated between feeling great and feeling defeated. Mentally, I really wanted that PR, but physically I felt rather awful. Was it accumulating stress at work? The cold I was trying to fend off? I felt so negative, and it was easy to see the negative in everything. I saw every pothole. Every bit of uneven, eroded pavement. I saw the gray sky. I took every elevation gain as a personal affront. I longed for the trails and greenness of running familiar streets back home. It didn’t help that I couldn’t recall many details of the course from 2016: it was too snowy back then! What a Debbie Downer! I consumed a Honey Stinger gel at the midpoint, just in case my malaise was primarily caused by energy depletion.

I felt so negative, and it was easy to see the negative in everything.

I wasn’t going to PR. I started getting passed by other runners. I set a new intention to be competitive with my prior half marathon times, despite this being a tough course. I run half marathons most years, and 2016 was my “Year of the Half Marathon” with 5 races spread out over just a few months. Could I best 1:29:18, the fastest time of that series? All of my faster half marathon times were from easier courses. I focused on putting one foot in front of the other. It was all I could do.

I passed the 9-mile sign and told my tired mind I was ⅔ of the way through. It’s helpful to play those kinds of games. With just four miles left, just like Amy, I visualized our 4-mile loop at home. With a 3-mile loop left, I was passed by a group of runners. One wore Hawaiian-themed running shorts and I was instantly jealous. My thermal tights were a bad choice in hindsight. Sunshine was starting to poke through the gray skies and I was feeling the heat. I was grateful that I left my windbreaker back at the hotel.

In the final mile, I was passed by another guy who looked like he might be close to my age. It’s so hard to gauge age when you’re in your 40s, yet I convinced myself he was in my age group. He quickened his pace as I quickened mine. I wasn’t going to catch him. After the final turn on the course, I saw the finish line far in the distance. Why couldn’t it be closer? Why? I willed my legs to turn over faster, but they did not respond. Hell, I ran the uphill James Street miles faster than these closing yards. There wasn’t time to dwell on this as I closed the distance to the finish. Soon, I was done. I gratefully grabbed a water from a volunteer and lowered my neck to receive the finisher’s medal.

As I sat on a stone wall flanking the finish line, Josh Brockner, a fellow Ithaca-area runner, joined me while he waited for his wife. The announcer shouted out Xander’s name as he finished, so I got up to greet him. Hot coffee from the nearby Dunkin’ truck helped me warm up a little, and Xander and I spent a few minutes inside the OnCenter before heading outside to see Amy finish. It was too cold to wait for Elizabeth, though, since the clouds had blocked out the sun again. The three of us met her inside for pizza, pancakes, and other post-race food.

I checked the results and was heartened that, despite my crappy in-race attitude, I placed 2nd in my age group (45-49). The first age group award went to a man with 1:19. My half marathon PR is 1:23, so there was slim chance I could have changed my age group placement by running faster. The next age group finisher was 3 minutes behind me, a decent margin, but I’m really glad that I didn’t give up. It would have been easy to do so, especially in the later miles when my mind was so negative.

After waiting in line for my Dinosaur Bar-B-Que Gift Card ($25), I ran back to the hotel to shower. It was downright luxurious, and if we started running more races out-of-town, I’ll remember this as a key reason to stay near the race venue. We drove back home via Ithaca and enjoyed Viva Taqueria as a family before Elizabeth headed back to college. 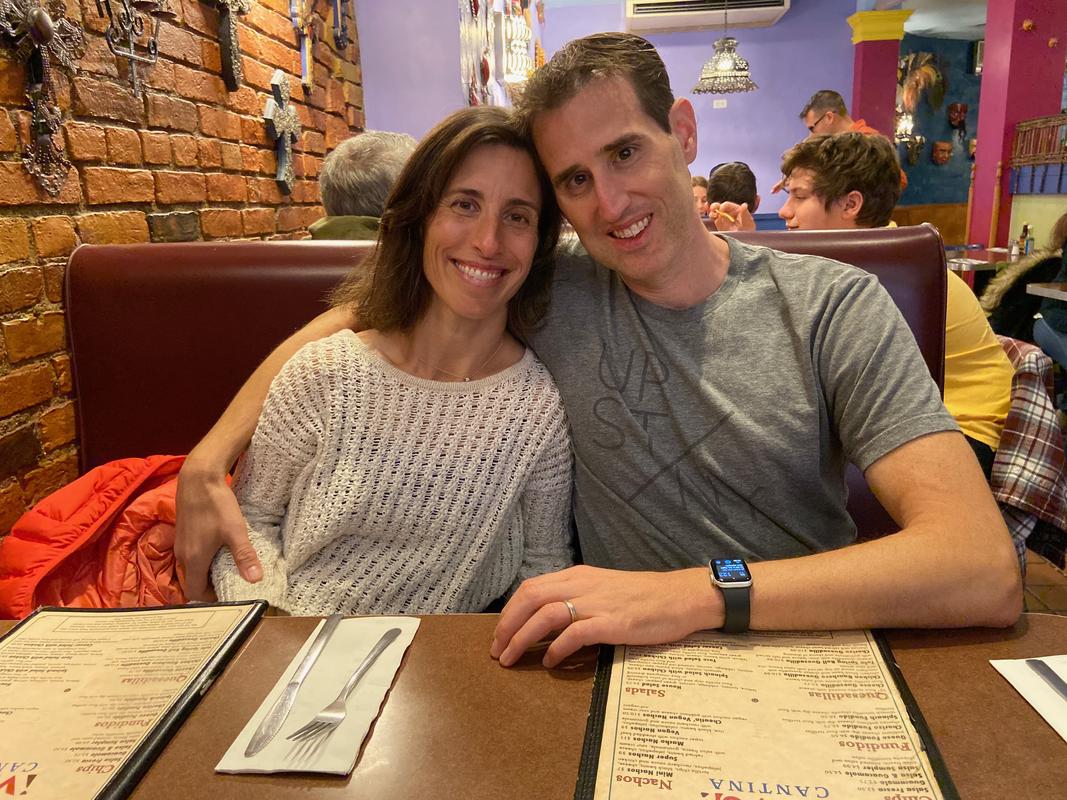 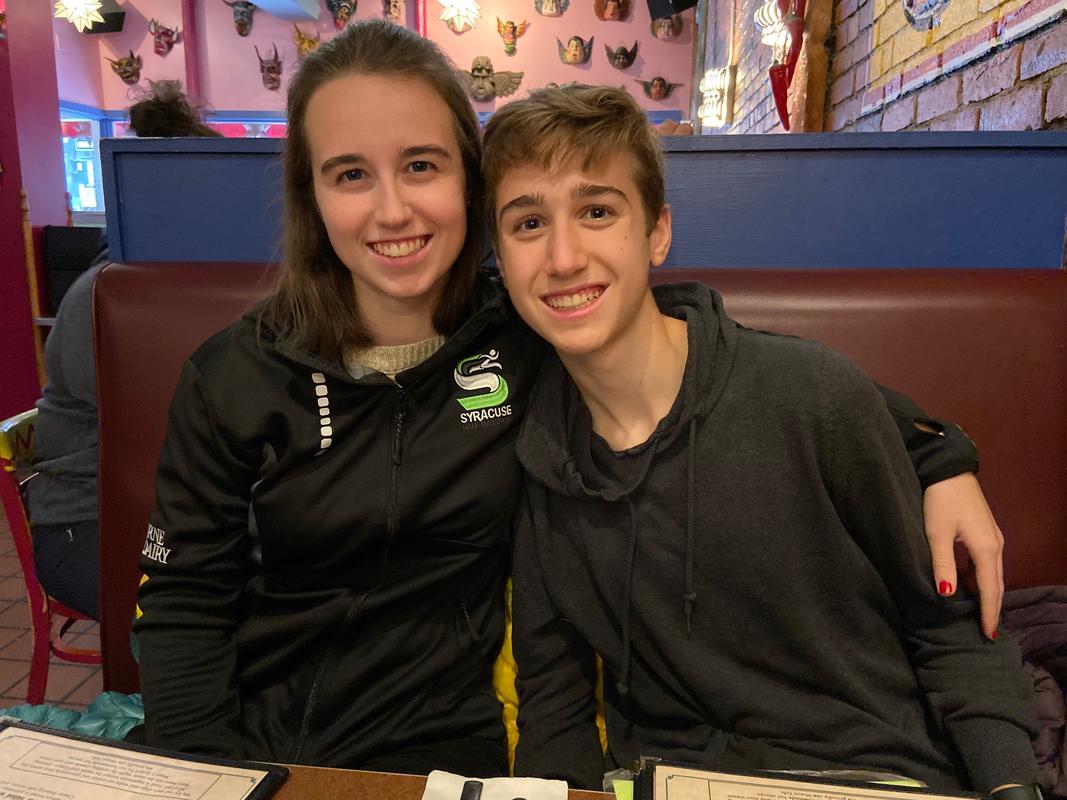 You might think my takeaway from the race, given how I felt in the middle miles, was a net negative. Given time to think about it, though, it’s so incredibly positive. Even though things may be difficult, even though I may not be having the greatest time in adversity, I get to do this thing. It’s really about the journey, not the destination. Those 30 runs that led up to the race? They were priceless. They were really challenging, yet they made my body feel great. Most of them were on sun-drenched streets that I know and love. And the fact that we did this race as a family of four? Well, I’m pretty damn proud. We’re a family that enjoys the anticipatory fun, the shared experience of racing, and the post-race glow of accomplishment. We’ll do it again, too.

I’m pretty damn proud. We’re a family that enjoys the anticipatory fun, the shared experience of racing, and the post-race glow of accomplishment. We’ll do it again, too.

What’s coming next year? I’m honestly not sure yet. I’m going to have to consider how my body’s feeling. I do know that yoga last night felt so good, with my tight calves and all. Am I up for another go at Cayuga Trails 50? I’m definitely up for another Skunk Cabbage and Gorges Half. I love those local races! I’m definitely doing MITHICAL Milers this winter, and will sign up for Hartshorne for another go at a fast mile. Most immediately, after a few more days rest, Amy and I are going to try a Les Mills BodyCombat “28 Days to Invincible” challenge. It sounds impressive, but it’ll just prepare us to do a full BodyCombat class without feeling like total fools. Onward!