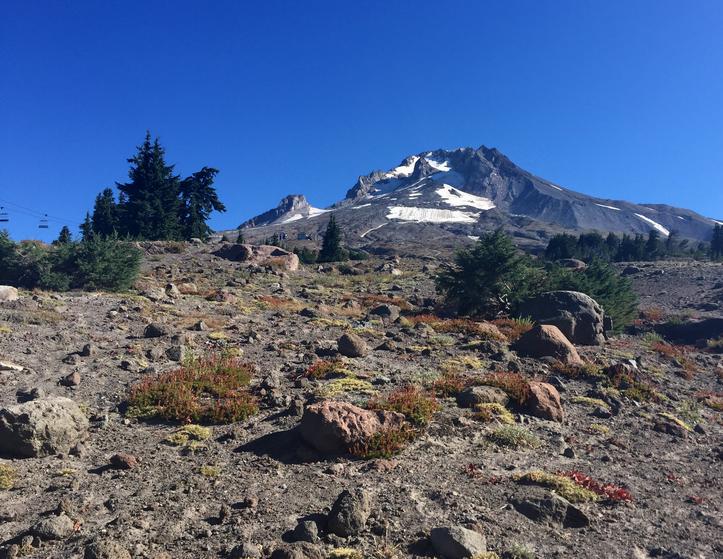 The kids were starting their week at Mount Hood Summer Ski Camp, so Amy and I selected a hike from Timberline through Zigzag Canyon and then to Paradise Park. We’d all be on the same mountain, but doing different activities! Here are some of the fantastic views of Hood from Timberline. 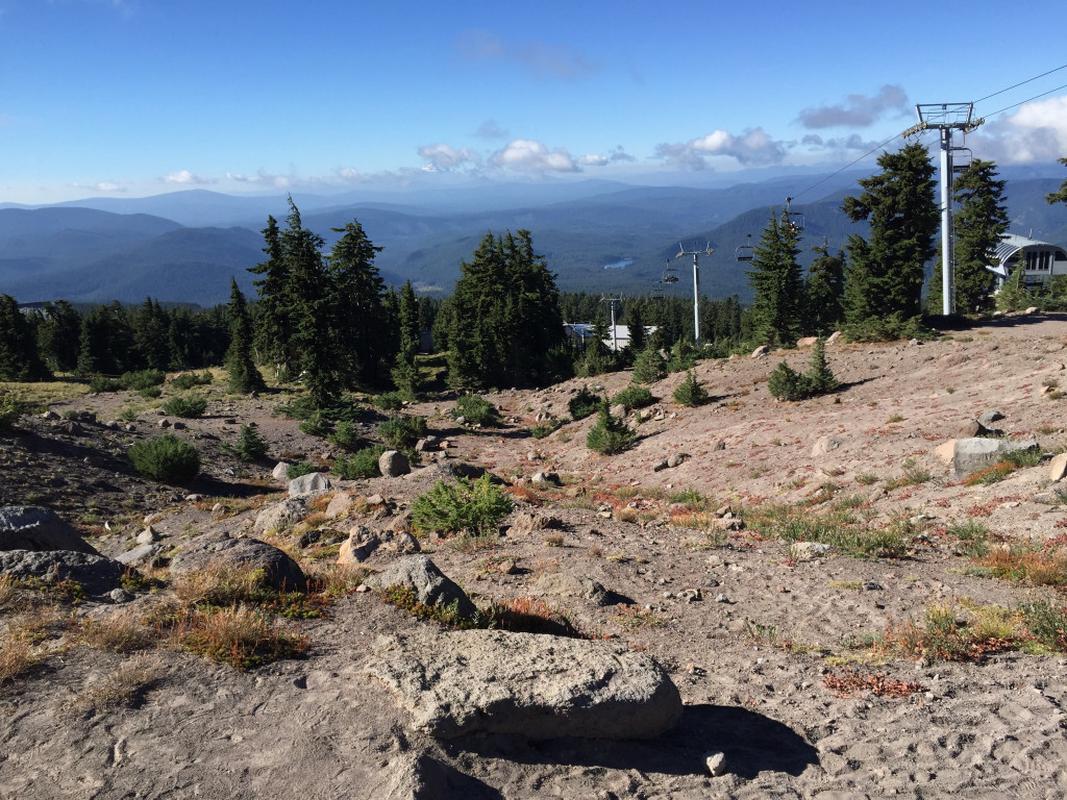 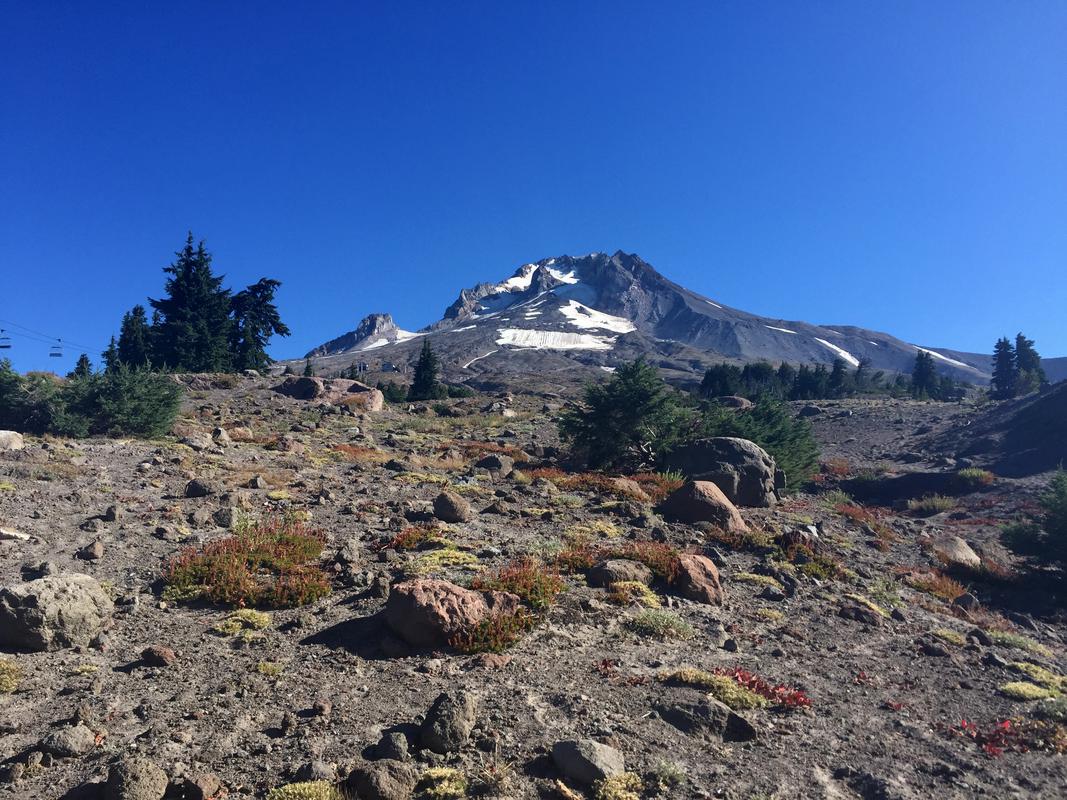 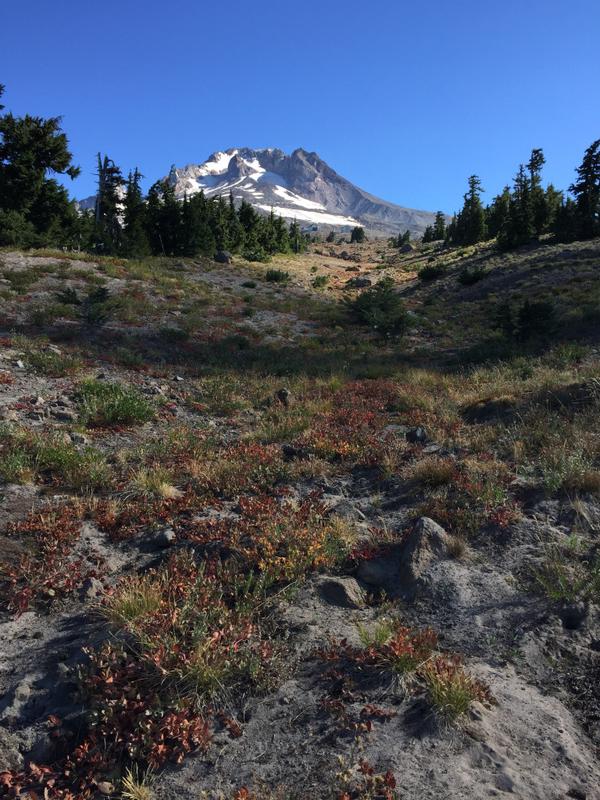 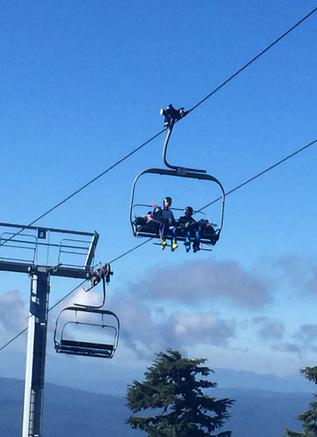 Kids on the lift

The start of the hike couldn’t have been timed any better: we were able to see the kids going up the lift for the first day of their camp. Elizabeth is a bit of a veteran, but this was Xander’s first time and it was cool to see him and his sister riding the lift together.

This was a very light snow year for Hood. After a roaring start to their winter, the weather pattern shifted and they never got the late winter snow volumes they traditionally get. We actually got a call several days before our vacation started, saying that the camp would have to be canceled! Then, a few days later, the good news that the mountain would stay open for the week, provided we could get the kids there a day early, which we could! They normally arrive on Sunday for Monday through Friday of skiing, but we got them there on Saturday, which included skiing. They would be able to ski Saturday through Wednesday and get a full week in. It would turn out that the mountain's last day of operation would be their last planned day of camp, so the timing worked quite well for all of us.

This hike starts on the PCT and winds its way clockwise around Hood. The first part of the trail is quite dusty, no doubt due to a combination of the dry weather and the trail's popularity. We descended first into a gully with Little Zigzag River in it, but the riverbed was dry. Before too long, we were at the crest of Zigzag Canyon, with dramatic views and a 700-foot descent to the riverbed. 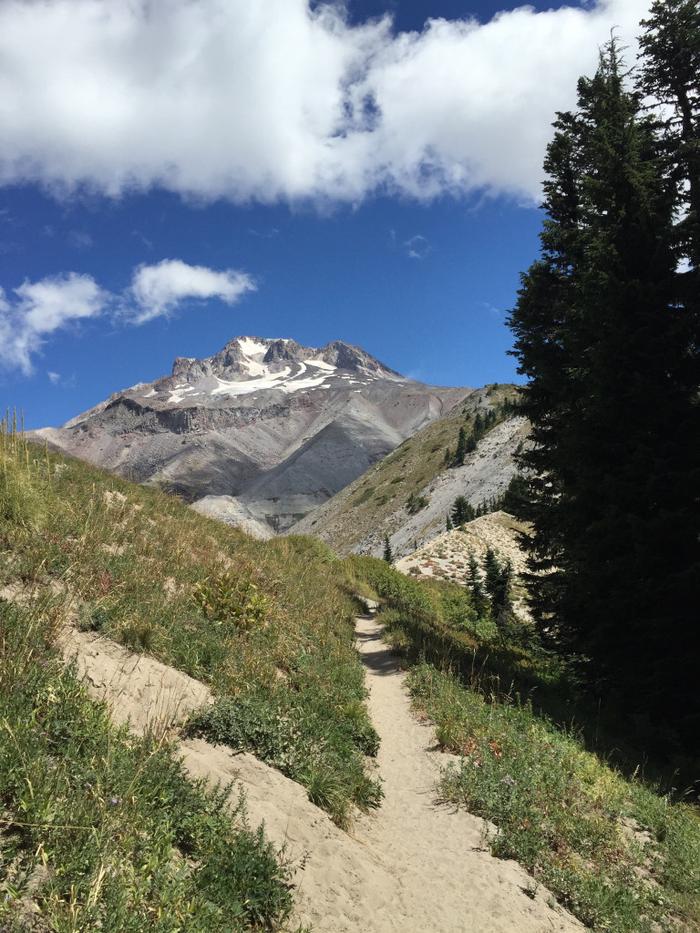 Hood, from the crest of Zigzag Canyon

After many switchbacks, gratefully shaded by stately trees, we reached Zigzag River. It was full of water, but not so much to make for an eventful crossing. We ascended the other side of the canyon, and took a right at the junction to make our way up into Paradise Park. 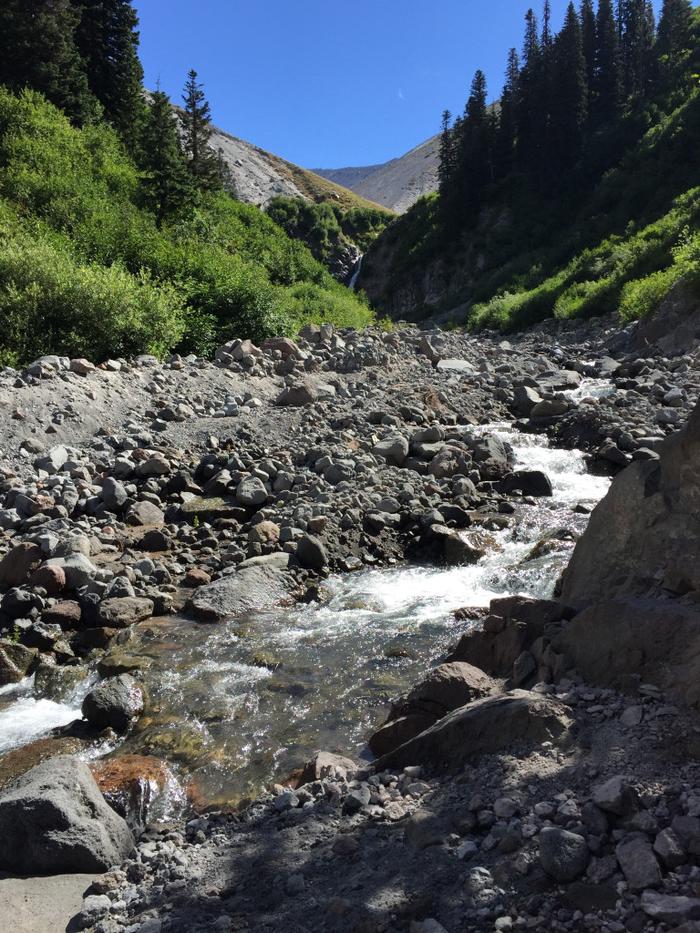 The view from Zigzag Canyon

There was still a lot of vertical gain after the trail junction, but we steadily made progress and eventually emerged into a meadow with dramatic views of Hood. At this point we checked the time, and we really wanted to make it back to Government Camp in time for a late lunch at a taco joint we fondly remember. We decided to take a left off of Paradise Park Loop on a smaller connector trail that short-circuited the longer loop by about 2 miles, saving us about 45 minutes.

The return trip was equally beautiful, and we starting passing more people as we approached Timberline. It’s a very popular trail! At one point we had good cell service and got a text from Elizabeth, asking where we were. We wrote back "on Hood!", and snapped this picture for her. Xander, having hiked this trail with us in prior years, guessed right away that we were on the Zigzag hike. 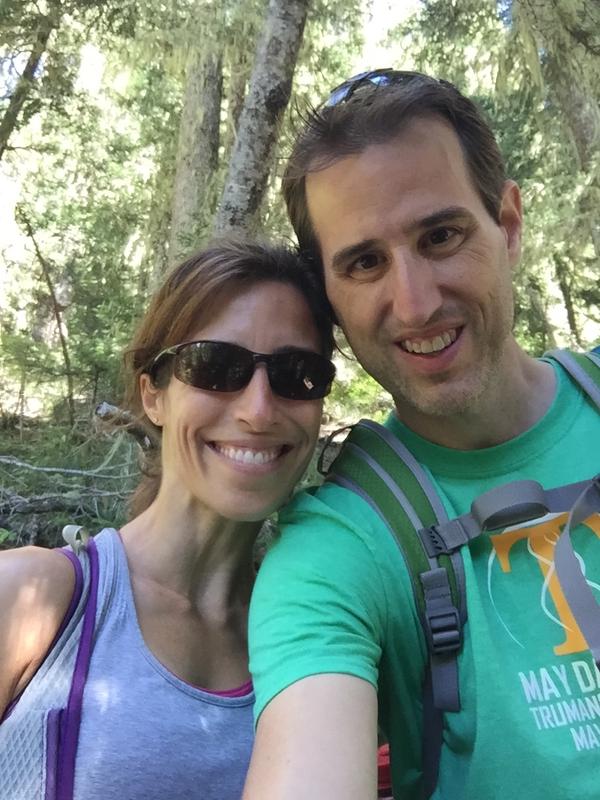 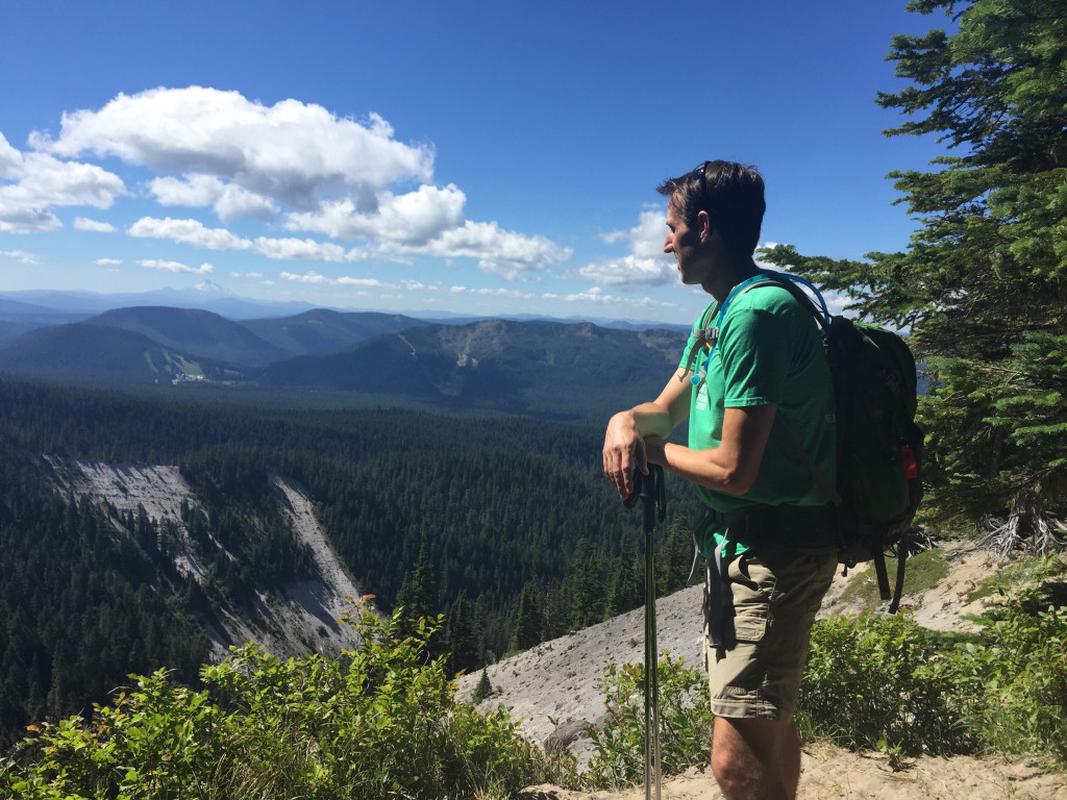 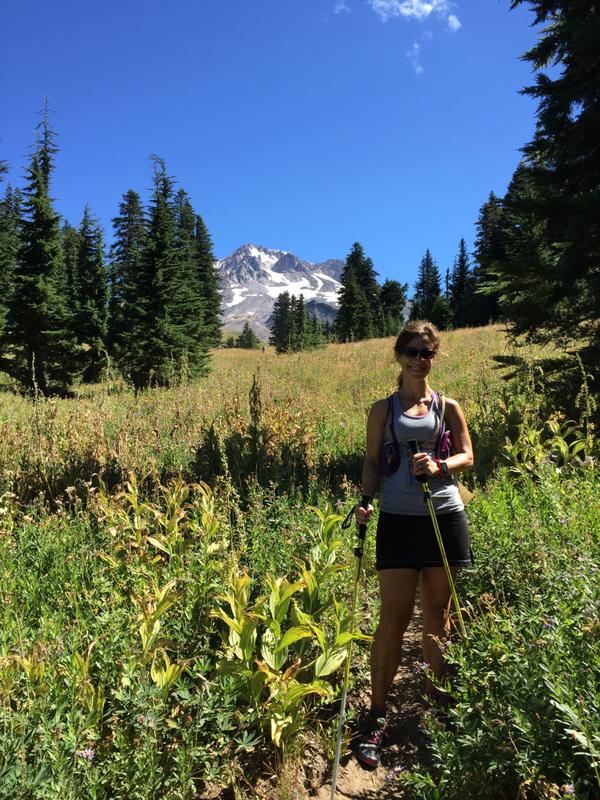 The Little Zigzag That Could

The key highlight on the way back was seeing Little Zigzag River start flowing. The heat of the day warms the snow further up the mountain, and that’s what makes the smaller rivers start flowing more heavily (or at all!) in the afternoon. Our timing was perfect, as we saw a modest rivulet of water flowing from left to right, turning the dry creek bed into a river, right before our eyes. I circled the “start” of the river in red. Such a cool event to see! 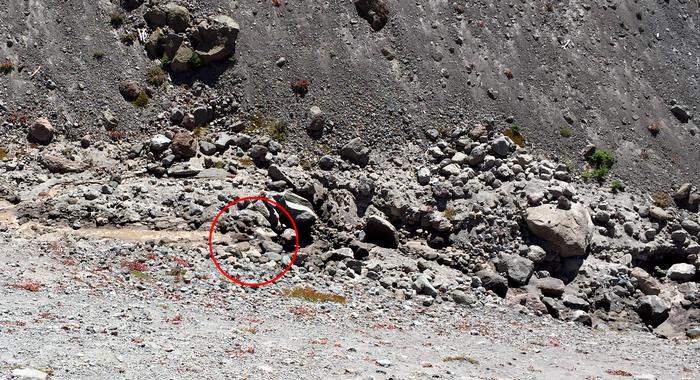 A modest rivulet of water flowing from left to right

Before long we were back at Timberline, and saw a few skiers making their way back to the parking lot. I recognized the red and pink ski packs instantly - our kids! We ran a bit down to the parking lot to catch up with them and find out how their morning was. It was very cool to see them on the way in, AND on the way out! We would make our way that afternoon to Sisters, our base for hiking for the next week, so it was nice to bid them farewell and continue our journey!

By the Numbers: Timberline to Zigzag Canyon & Paradise Park

I used the Gaia GPS app for my iPhone to track this course, and subsequently loaded it into Strava using the GPX export. Total mileage for the day was 10.6 miles (2,316 feet of gain as reported by GPS) with just about 3.5 hours of hiking.

This is Hike 77: Timberline Lodge Trails in 100 Hikes in Northwest Oregon & Southwest Washington. There's a great description and map in there. Enjoy!