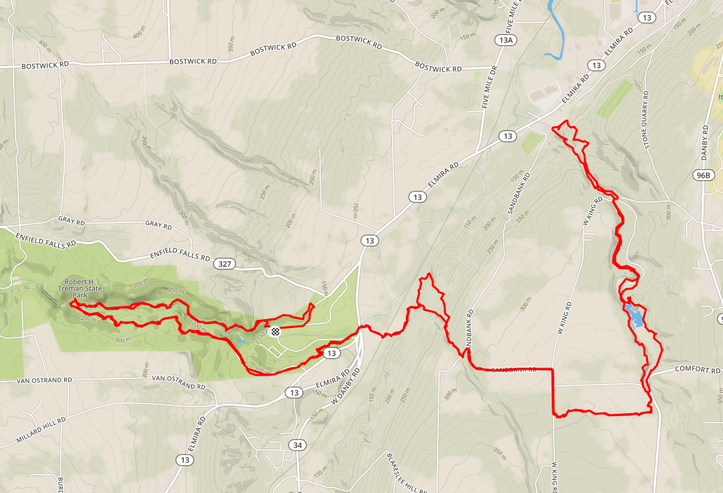 This is a guest post from my son, Xander, who planned and executed this hike to help fulfill some of his rank advancement and Hiking merit badge for Boy Scouts. Amy and I accompanied him on this hike, and he did a great job! He got some compass and map work in, planned and packed the meal, assembled his personal first aid kit and endured the 20.75 mile hike with some nice, even splits! Enjoy the post ...

Before the hike we packed a first aid kit so that if anyone got injured we could treat that on the trail. We also were prepared in the sense that the sun sets at 6:30 p.m. so if we finish late we brought headlamps. I also packed a lunch for my family which contains a sandwich, chips, an apple and some trail mix if we got hungry before lunch. I also packed a whistle in case we got lost and a compass too. I was also going to be the navigator for this hike so I would be using the compass to tell where we are. I also was going to use a map on which I highlighted our trail on so that we'd know where we are at all times. Lastly, I prepared a plan for our hike so we would be able to look at what we planned at any time. I also packed a jacket for any time I get cold so that I can put it on at any point in the hike. 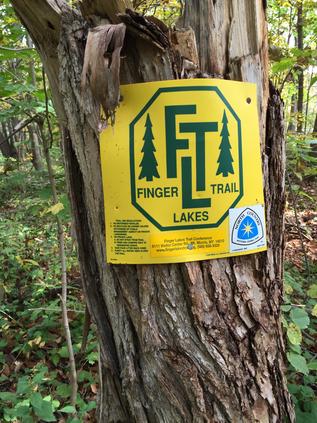 Once we got going on the hike it was a lot of fun! We started at Treman State Park and we saw some beautiful sights. At 1 mile into the hike we saw a heron. It was so cool because it was my first time seeing a heron. After that we resumed our hike. We were almost off the Treman Trail when we saw a cool outdoor shelter and missed the turn onto the Finger Lakes trail. Thankfully we found another entrance to the trail and got on it. We walked through all the leaves on the trail until we saw a bridge and had to cross over it. Finally we made it to our next part of the hike which was Lick Brook.

As we started into Lick Brook it felt like 100 degrees as we were in the sunlight but then as we got into the trees it was cool. Then we confronted a river. There was no way we could cross that so we hiked on the train track. Before we did we looked and listened for any trains. Then we crossed the train track which was very scary because directly under you is water and the fear of getting hit by a train is really scary.

Finally we were done with all of the obstacles and we hiked until we hit a very steep uphill which was very hard to climb and it was like a mile long. After we got through that it was a steady flat for a while. As soon as we were ready to start the next part of the trail we saw a sign that said that the trail was closed due to hunting season which was really annoying. We had to hike on road for a mile until we got back to the trail. On the road people in cars were just staring at us like we were crazy for hiking on the road. Finally after hiking on the road which felt like forever we got to the trail again.

We got to Treman Lake which was beautiful and crossed the bridge into Buttermilk Falls State Park. We hiked a while on the Bear Trail until we got hungry so we stopped for trail mix. Finally we got on the rim trail at Buttermilk and we hiked down it. The leaves changing were so pretty and it was so fun to walk through that section of the trail. Once we got to the bottom of the trail we stopped at a table and had a picnic. We had our lunch, went to the bathroom and headed back out to do the same thing we just did, but backwards.

We started hiking on the rim trail with a bunch of tourists who were hiking at the speed of molasses. Finally we got off that trail and got back on the Bear Trail. Then we made it to Treman Lake again and were able to see where we were with landmarks we had seen when we hiked there the first time. Then we made it back into Lick Brook after hiking on the highway again and we got to do all the downhill we had gained going up. There were so many leaves on the trail that it was not visible and we had to really rely on the white blazes.

Finally we got back on the Finger Lakes Trail which took us to Treman again. We were almost done on the hike when we looked at our mileage and saw we were going to have to add more mileage. My Dad showed us a trail and said he had been on it before, so we took it. By the end of the trail I was dead and felt like I needed to sit. We got in the car at 20.75 miles feeling tired.

After the long hike we wanted to go to Ithaca Beer but the wait was 1 hour wait so we ordered pizza from Little Venice. When we got home we shared all of our stories with my sister and we ate pizza and chicken wings. It was amazing tasting because it was the only warm food I had had all day! Then we went to sleep. 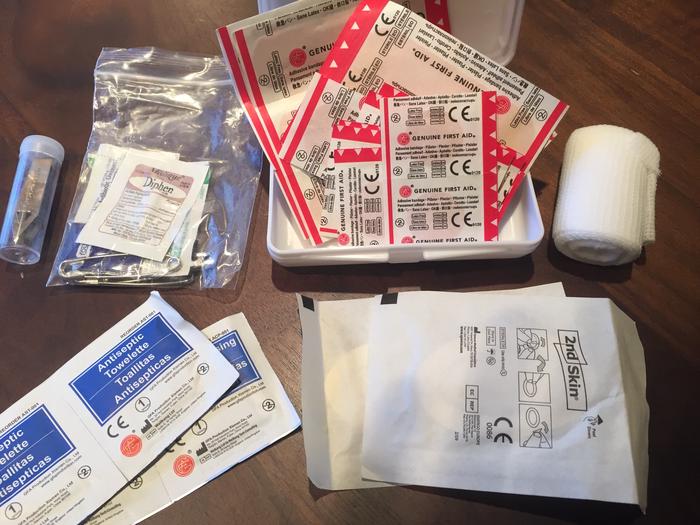 In my first aid kit for my hike I packed

We did not use any of these items on the hike because no one got hurt! 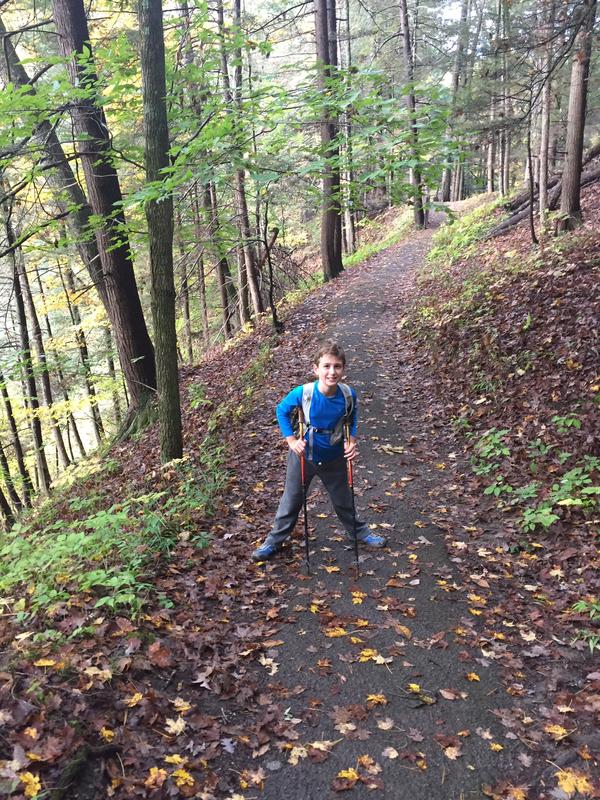 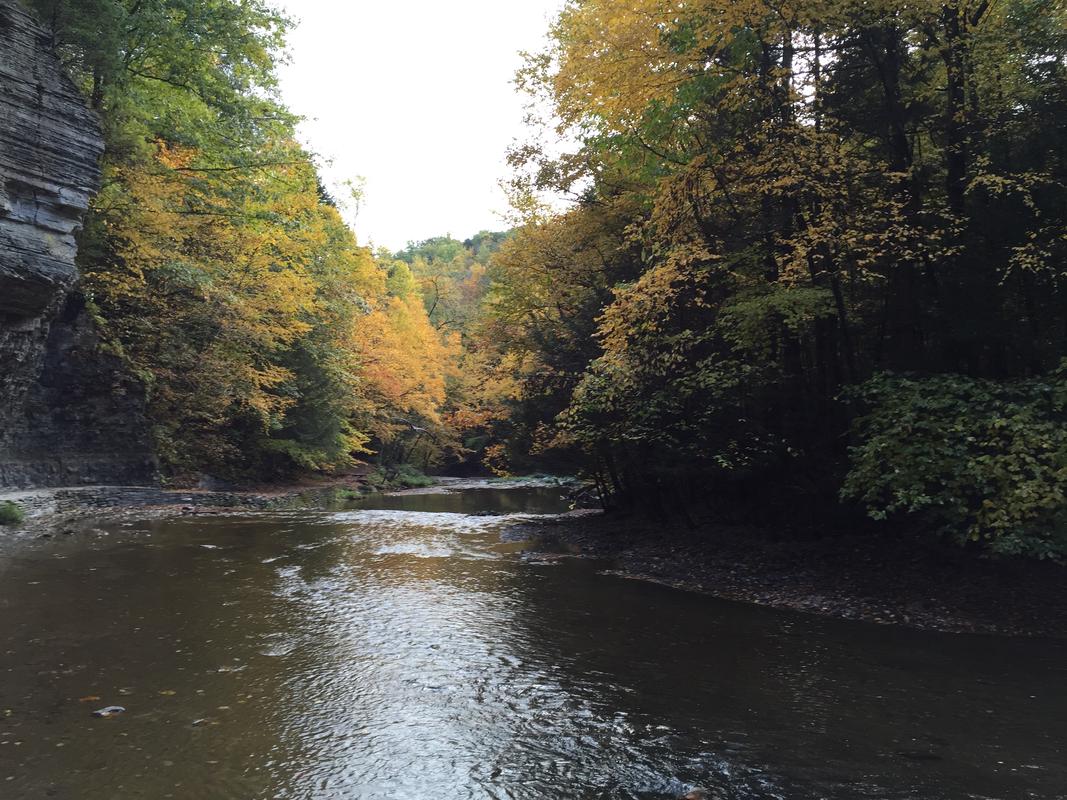 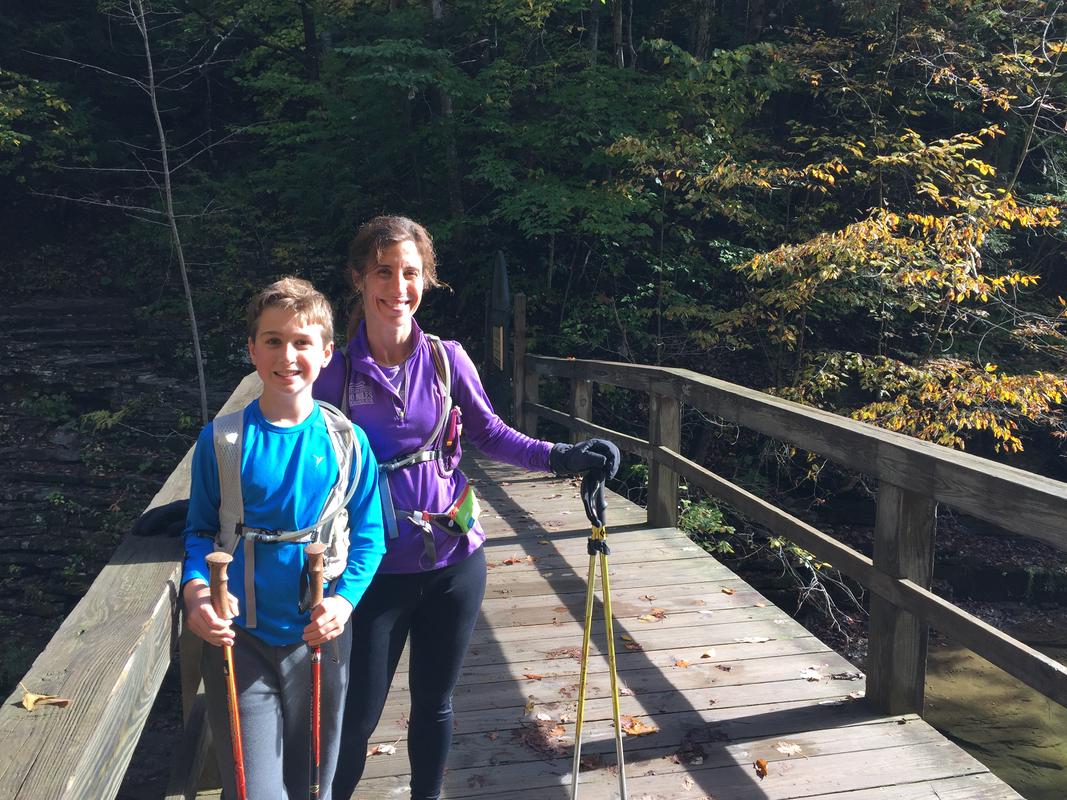 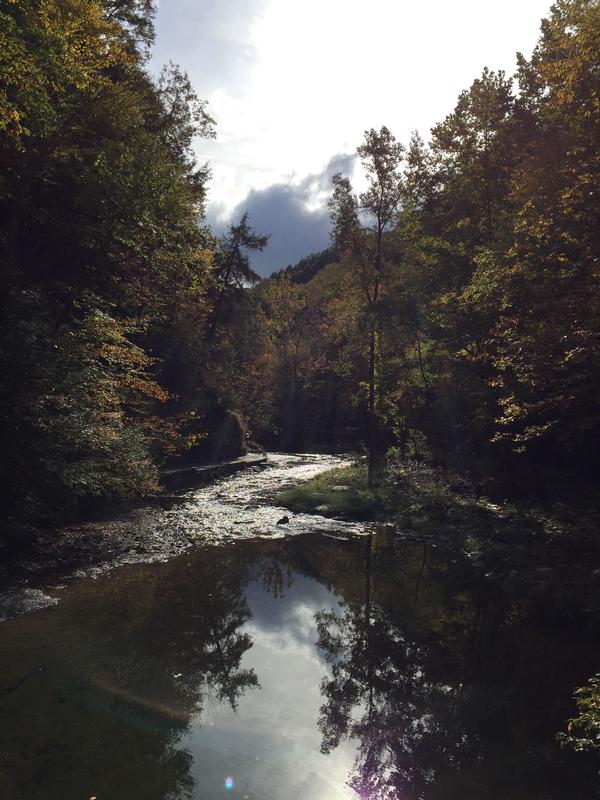 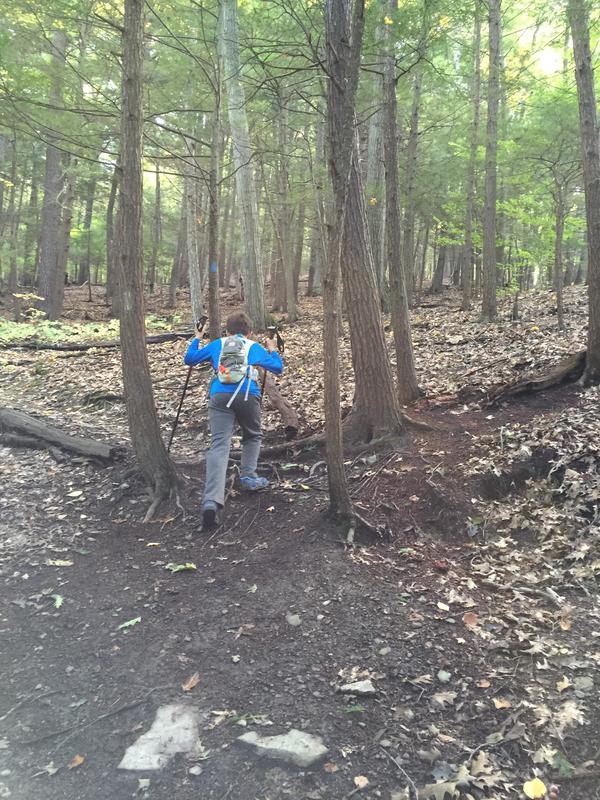 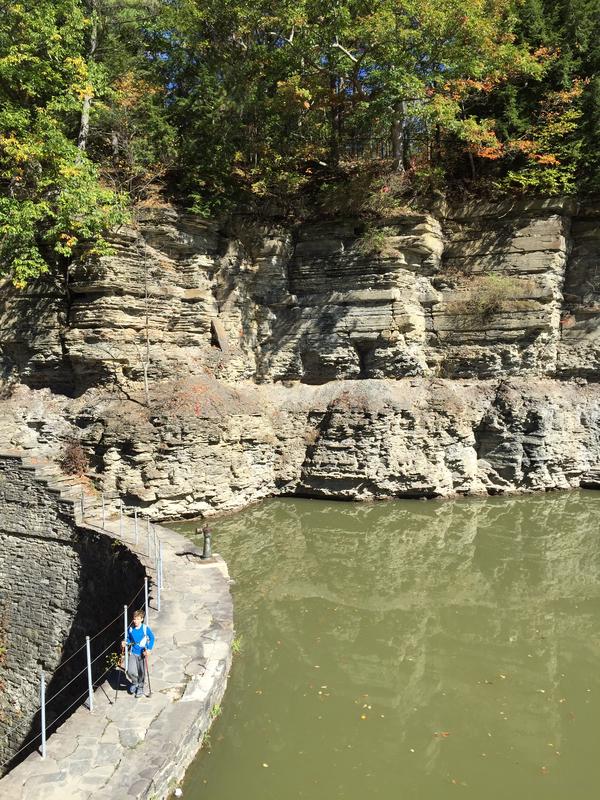 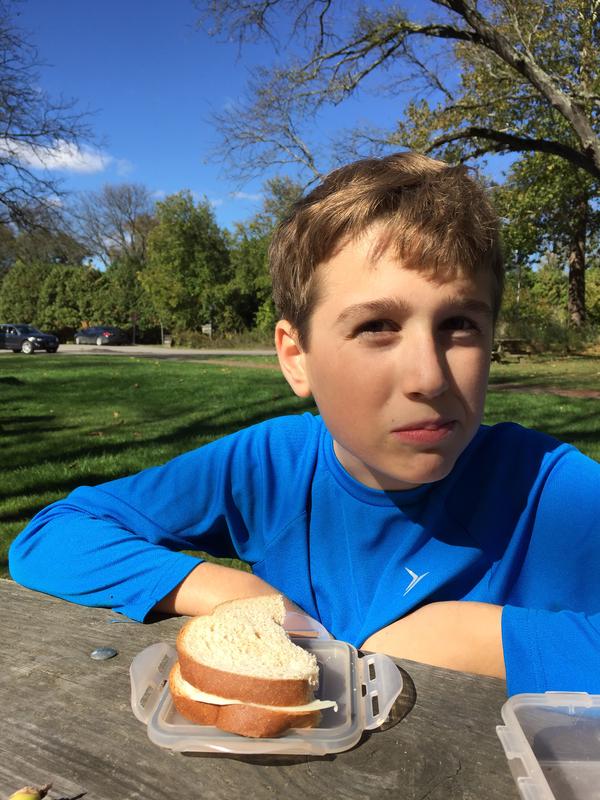 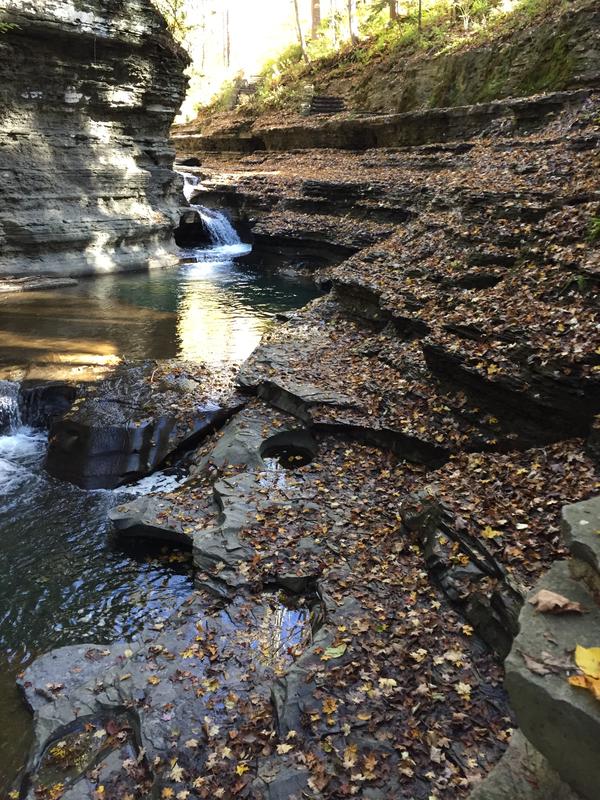 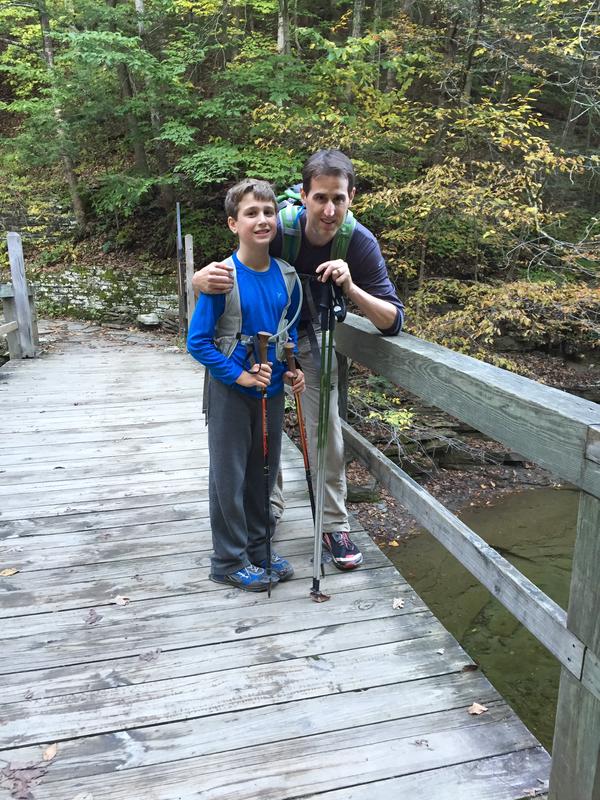 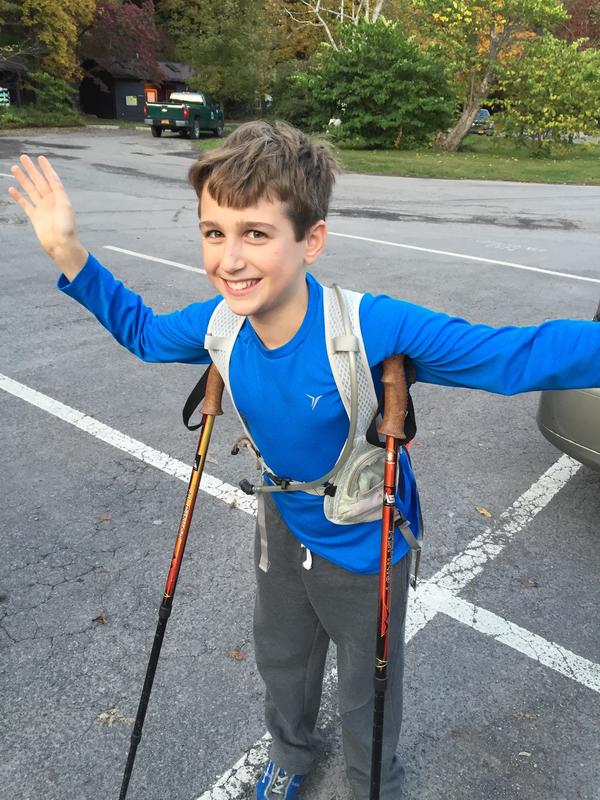