After five years doing the sprint distance at the Cayuga Lake Triathlon, Amy and I decided to up the ante this year with the Olympic distance. The Olympic distance is a 1.5K swim, 24.3 mile bike, and a 10K run, so double the sprint in everything except the bike (which is almost double). I had a really great training cycle for this race, so I was really looking forward to it! Plus, with Amy doing the Olympic, Xander doing his second youth triathlon and Elizabeth (biking, running) doing a relay with her friend Jessica (swimming), it would truly be a family affair.

It's been kind of a ritual to go to Taughannock Park's Summer Concert Series the night before the race. Transition is all set up, and it's a really nice way to get even more excited about the following day. We enjoyed relaxing and listening to music and chatting with Simon, Jessica's Dad, as the sun set and the temperature turned cooler. The race morning temperature was forecast to be in the mid-60s, rising into the mid-70s during the race. I took this as a good sign, as despite the persistent humidity, the water would be somewhat warmer than the air, and the bike would be when it was just starting to warm up. We turned in after the concert, having packed all of our race paraphernalia the night before, and woke at our customary 5 a.m. time for a coffee and a bit of a show before waking the kids and getting out the door. 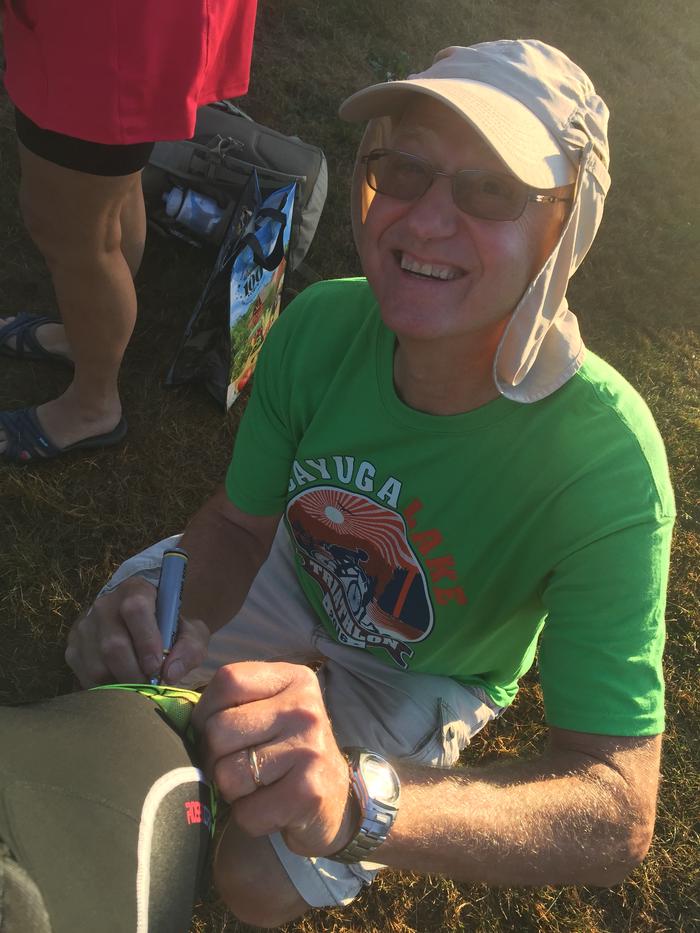 Dad getting me marked up

We got to the park around 6:45 a.m. and were happy to be parking pretty close to the transition area. We're really LUCKY to live just minutes from the park, so it's the most stress-free race we participate in, excepting the May Day 5K and Chris Bond 5K, which are right in the village. We got our bodies marked by Ed and Jean, and headed off to our respective numbered spots in the transition area to get ourselves organized.

Amy remarked, and I agree, that the intermediate distance is really great because there's very little time for stress to accrue. After we had our transition set up, we had only about a half hour until she started her race, and 50 minutes until mine. It was barely enough time to go to the bathroom, socialize a bit, and have a chance to warm up in the lake before our wave went off. As I did a few strokes in the warmup area, I noticed that my usual butterflies had flown off somewhere else. My Total Immersion swim training was also mental training, and the part of my brain that gets all nervous had clearly taken a chill pill. I was ready! 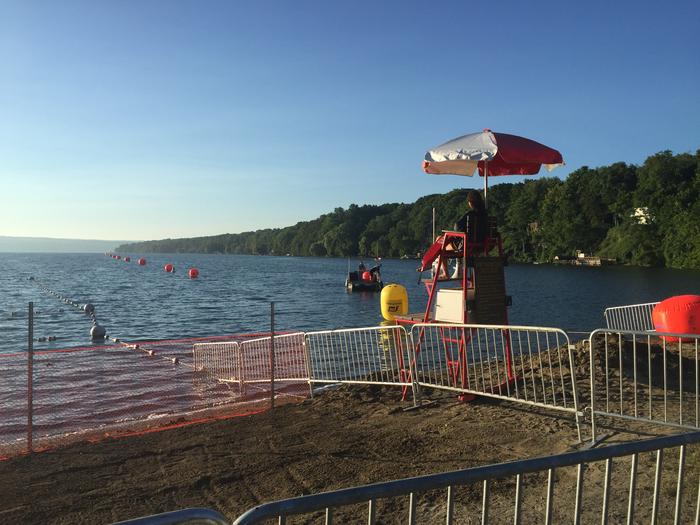 Checking out the swim course before the start

In talking with Simon Prosser just before starting the swim, I got a really timely piece of advice. We were talking about the fray at the start, and how it'd be good to stay off the buoy line and make more of a tangent for the turnaround point. After all, over 750 yards, the added distance of a tangent would be negligible. In the prior year, I had tried this and failed, since I pushed to the right by swimmers at my left. This year, I went FAR to the left so only one guy was to my left. I had a front row seat, and I confirmed with my fellow swimmer that he, too, had the same strategy. Just a few minutes went by and the whistle blew: we were off!

And here's the miraculous thing. I NEVER contacted another swimmer at the start, and that has always been the core concern of mine with the swim. I just settled into a really good rhythm, kept trying to gauge my distance off the buoy line as I progressed, and never got too taxed to have to really slow down. The outbound leg was against some light wave action, but that too I was prepared for having training in far worse conditions in the lake. As I rounded the turnaround buoy, I looked at my watch for time of day. I had been swimming for 17 minutes, and I knew I'd have a bit of a boost on the return leg, going with the wave action. One of the things Shane taught us was that the purpose of Total Immersion wasn't to make you faster per se, but to make you more efficient, saving your energy for the bike and the run. Last year's sprint took me 17:11, and that's where I was at the halfway point. 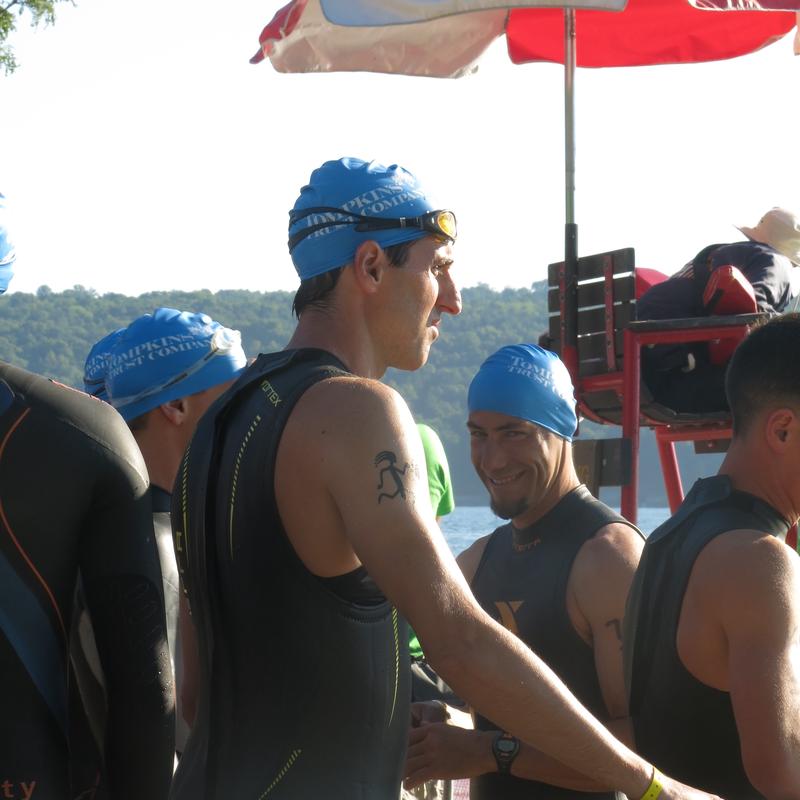 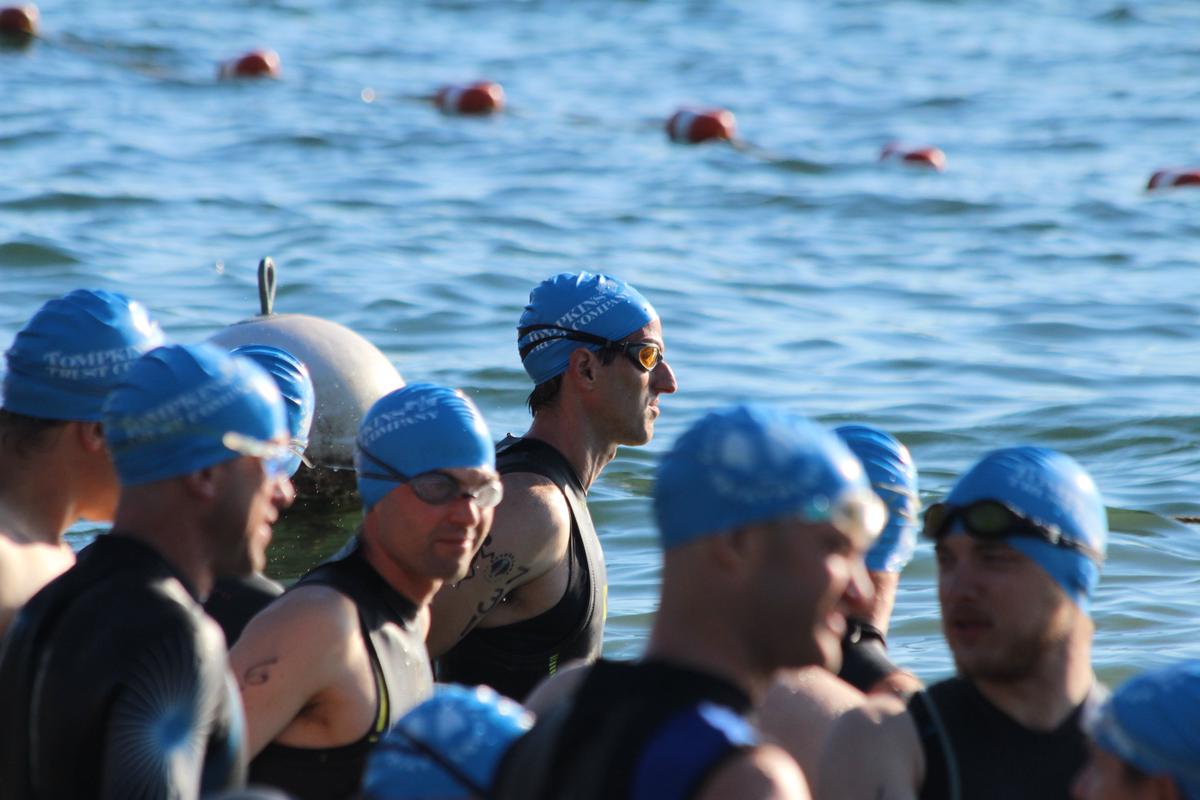 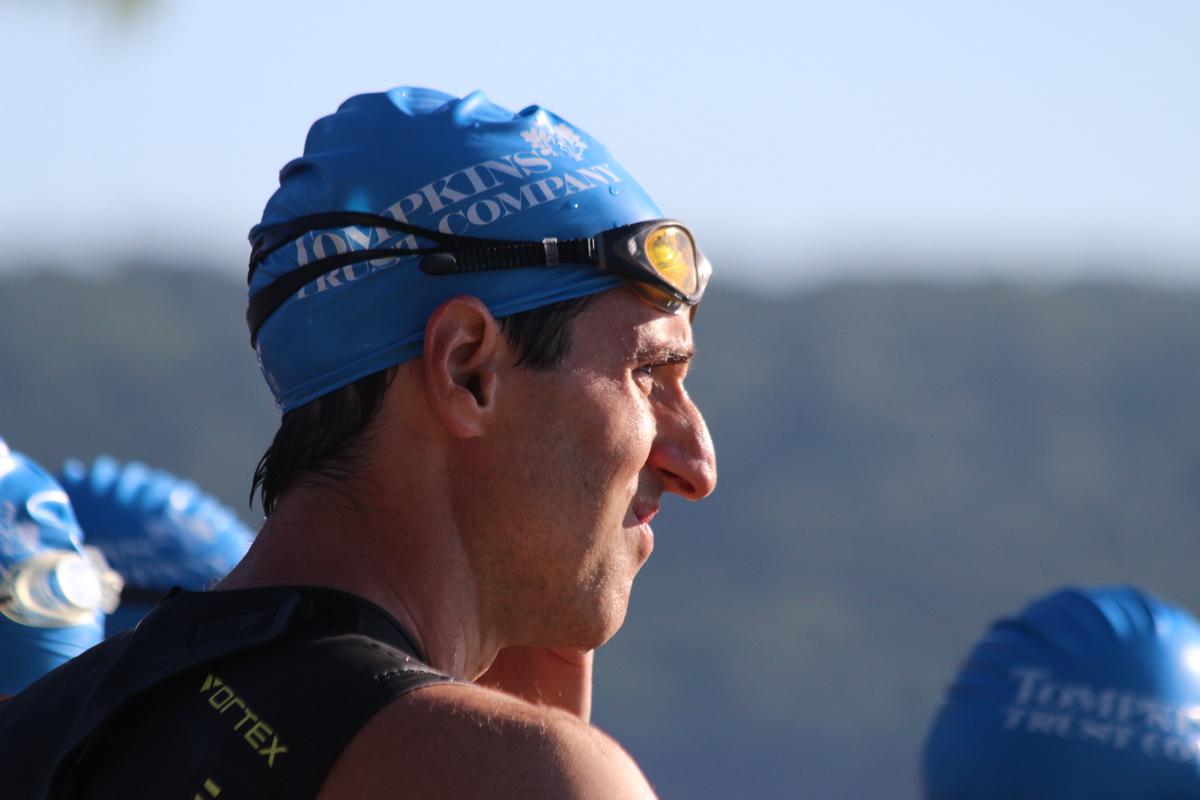 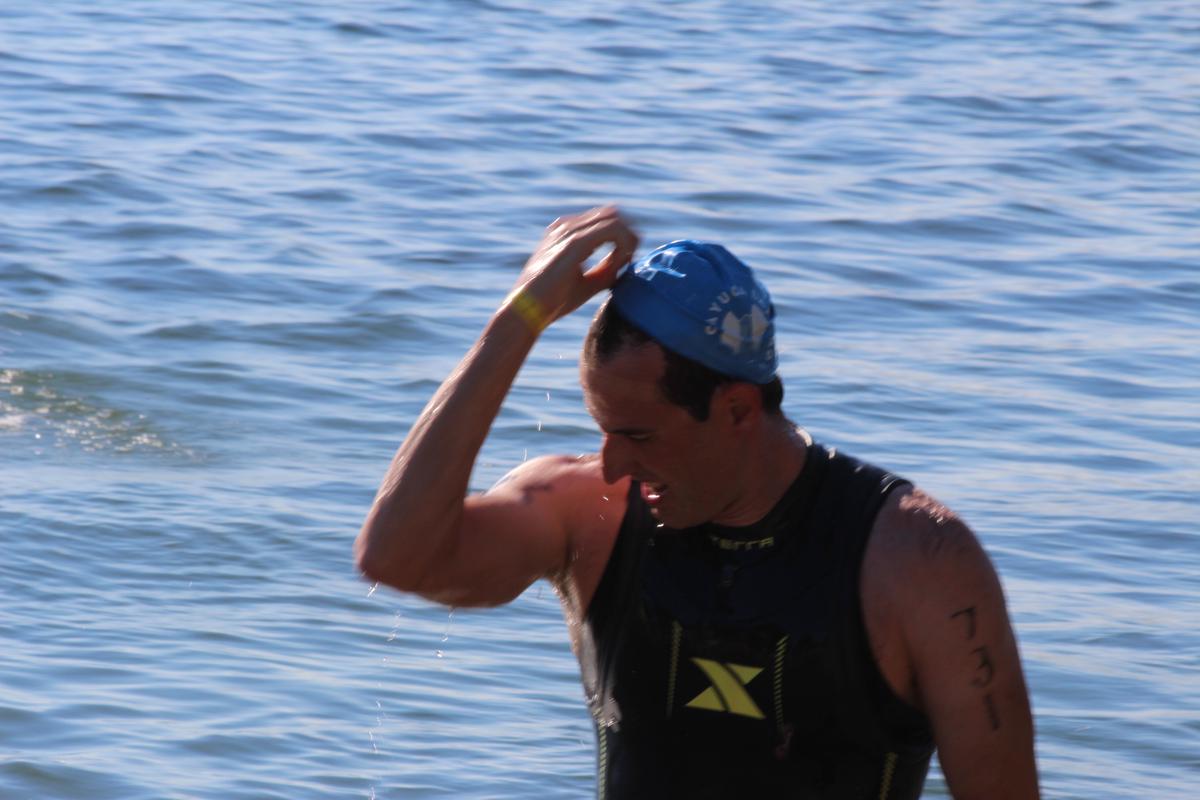 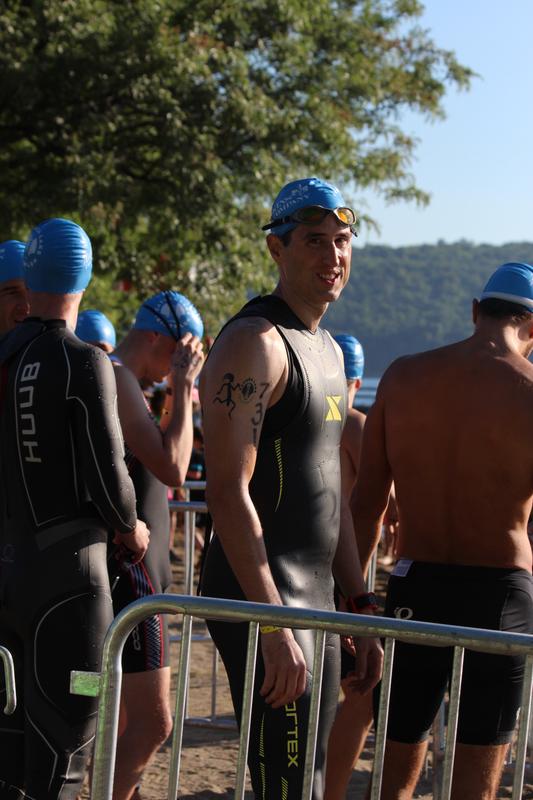 The return trip was blissful, and probably the main reason I think the swim was my favorite of the three disciplines this year. I focused on efficient gliding, balance and hip-snapping, and enjoyed the feeling of passing other men in my wave, and some men from the prior wave. The way back proved to be minutes faster than the outbound section, and before I knew it I was at the beach, up on my feet and stepping through the parking lot to get into transition. 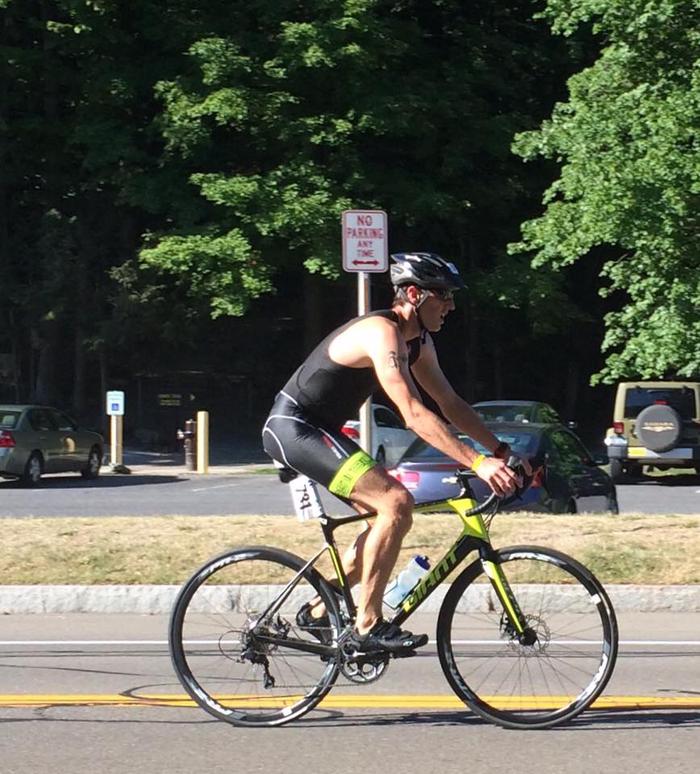 As I entered transition, my wetsuit was half off, and I quickly got the rest off as I sat on my crate next to my bike. I got my cycling shoes on quickly (no socks, and I'd trained that way), downed a quick gel and was out pretty quickly. The sun was out, and the air was not too hot. As I began the ascent on Route 89 out of the park, I was grateful to have practiced on the course and figured out the best gearing and sit/stand ratio to be efficient up the hill. The bike was rather unremarkable otherwise. I enjoyed ripping down the hill into Sheldrake, taking that hill at 36 mph and setting a personal PR on the flat segment at Sheldrake. A quick hill to get back up to Route 89 and I was southbound.

My friend Adrian Western passed me shortly after we got on Route 89, and I enjoyed trading places with a few bikers on the return trip. I had another gel and consumed more water on a few of the flatter stretches. It was really nice to see homeowners on their lawns cheering us on with their cowbells and voices. My all-time favorite part of this ride is the descent back into the park, and this year did NOT disappoint. I hit my top speed of 41.2 mph on this section, passing another racer in the final half mile. It's the fastest I've ever been on my bike. Woohoo!

Again into transition and, in an effort to be quick, I put on my running shoes without socks. I'd regret that, but had another efficient transition. My legs turned over pretty well after the repetition of the bike, and I setting into a run pace in the low 8-minute mile range. The run was quickly difficult, most notably mile 2, where I had to work to diagnose and remedy a bad cramp that went the entire front of my ribs, from left to right. I was carrying water, and consuming that and some of the aid station Gatorade had that problem licked by the 3 mile mark. 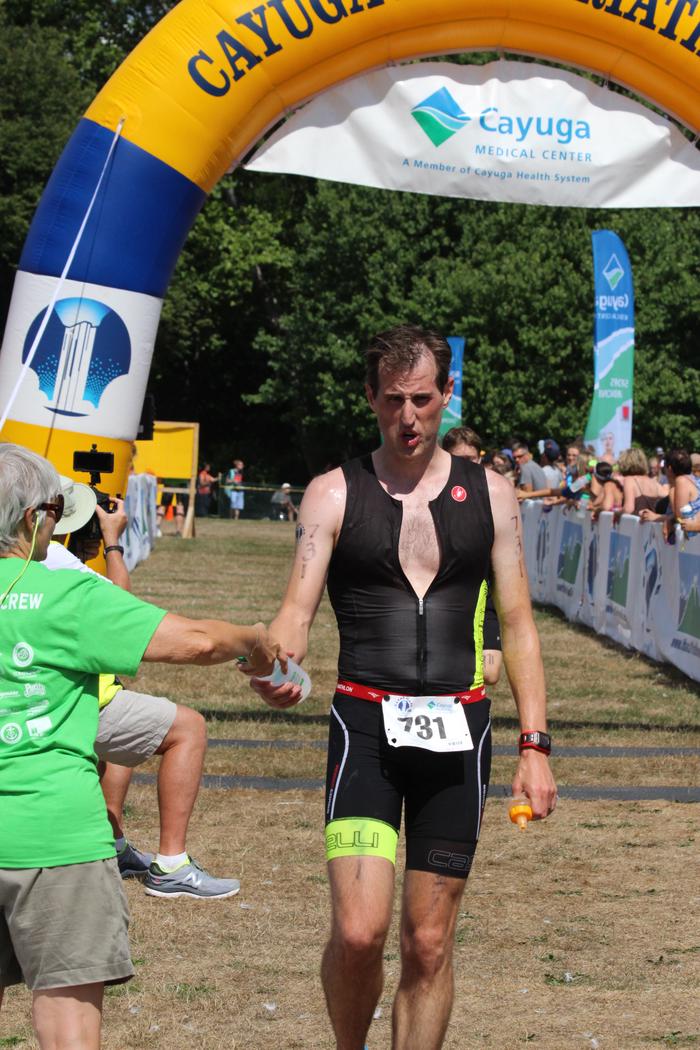 Finishing has never felt SO good

Heading back to Taughannock's base trail for the second half of the run, I became aware of some hot spots on my left foot. Socks! Man, I wish I had 'em now, because something on the shoe was doing a job on my foot. Having to live (well, run) with that decision, I soldiered on, and managed to negative split the remaining miles of the race. The crowd support and aid station support was so nice to have on the trail, as it made time FLY by. I was excited to hit the falls and begin my return trip, knowing I'd finish soon enough.

Crossing the finish line, my first order of business was to get my shoe off and assess the damage. It was just a pair of smaller blisters, nothing major, and I enjoyed slipping into my Crocs to see Amy, Elizabeth and Xander all finish their races!

Post-race amenities at this race are awesome, and this year was no exception. We enjoyed Ithaca Beer, Wegmans wraps, and Purity ice cream. Plenty of delicious samples were on hand, too. We enjoyed sitting in the shade as a family, chatting about the race, and were soon headed home to put our gear away and enjoy the rest of the day! Here are a few post-race pictures with Ed, Jean, Ray and Diana, and with Jessica, who relayed with Elizabeth. Many thanks to my Mom and Dad for taking some of these great pictures! 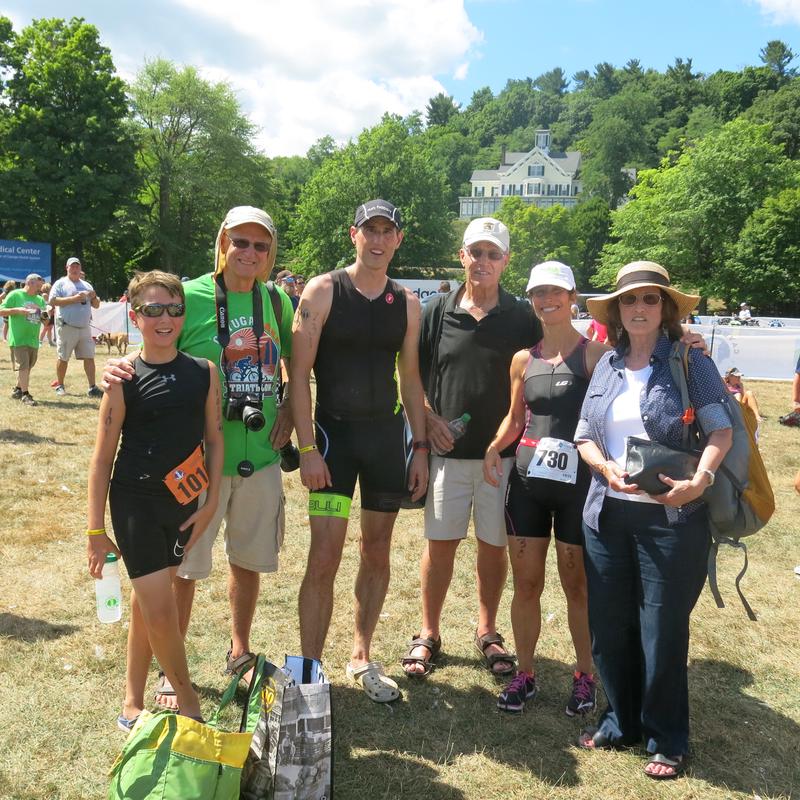 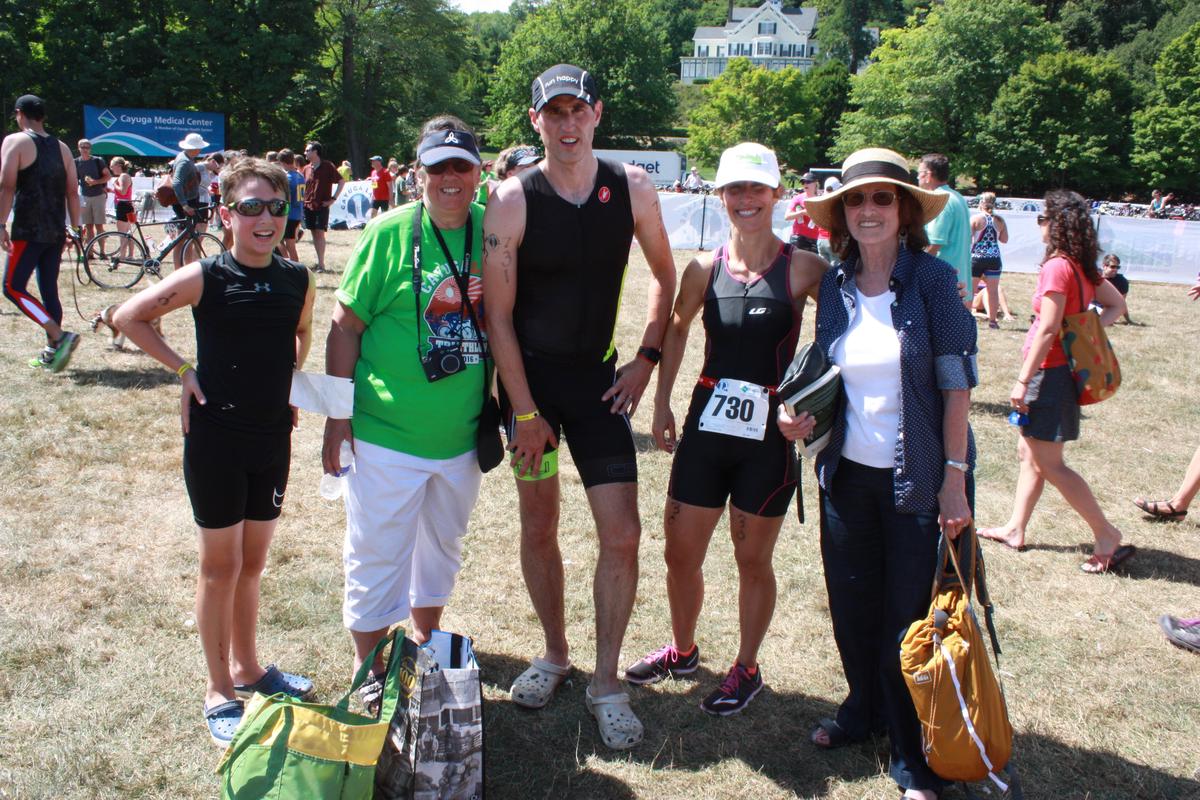 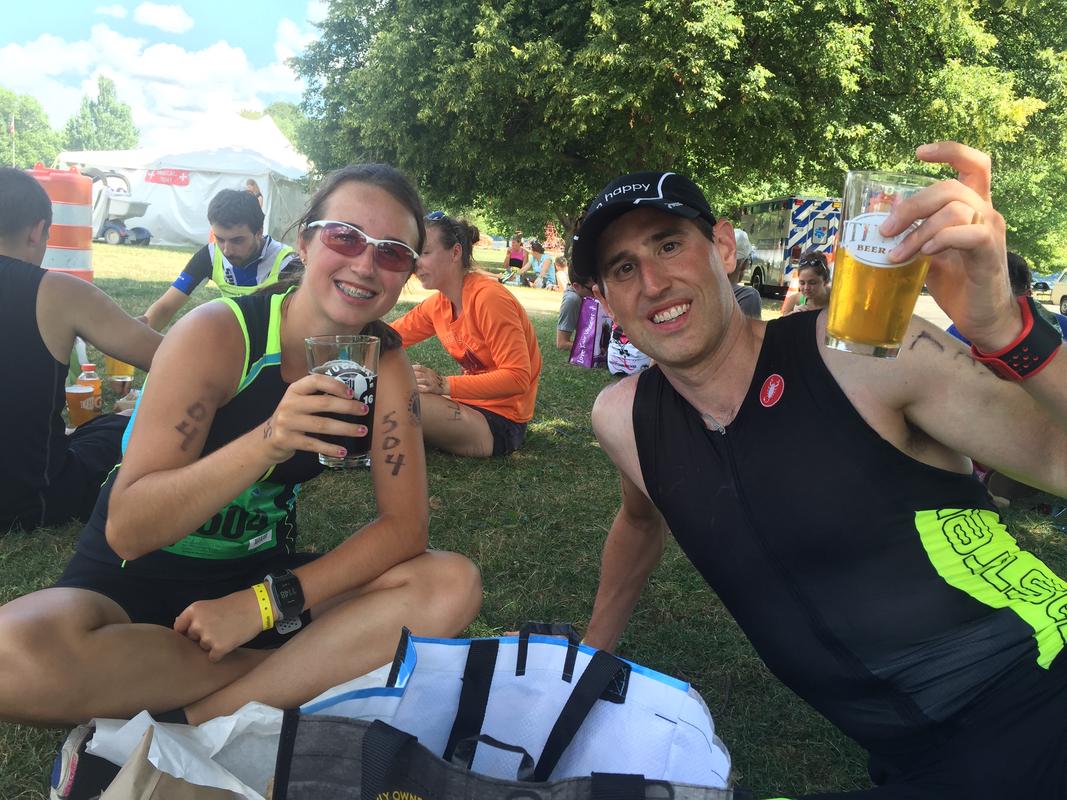 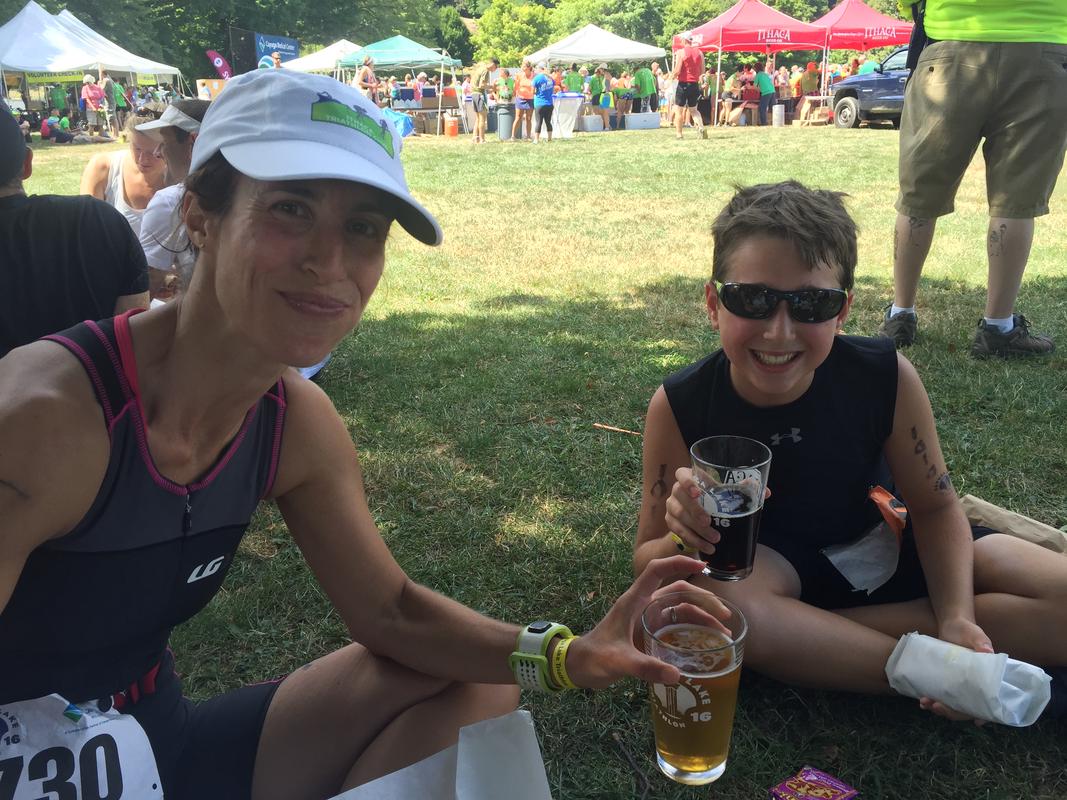 One difference this year was the lack of an open amateur wave, so there were some really GOOD athletes in my age group. That said, I'm so happy with the results! Compared with last year, my swim pace sped up from a 2:23 per 100 yards to 2:06 (thank you, Total Immersion!); my bike pace was exactly the same, and the run this year was tough given the hour and 45 minutes of working hard beforehand. My run pace slowed from a 7:36 last year to an 8:17 this year (I'll chalk that up to the cramping, too!) Drink more water next time, bud. However, I really sped up my transition times, basically cutting them in half.

Compared to Other Years: Olympic Distance

Given this first experience with the Olympic distance, I think it is a GO for next year. I really enjoyed the training, and the friendly feel of this race is not to be missed. Onwards!