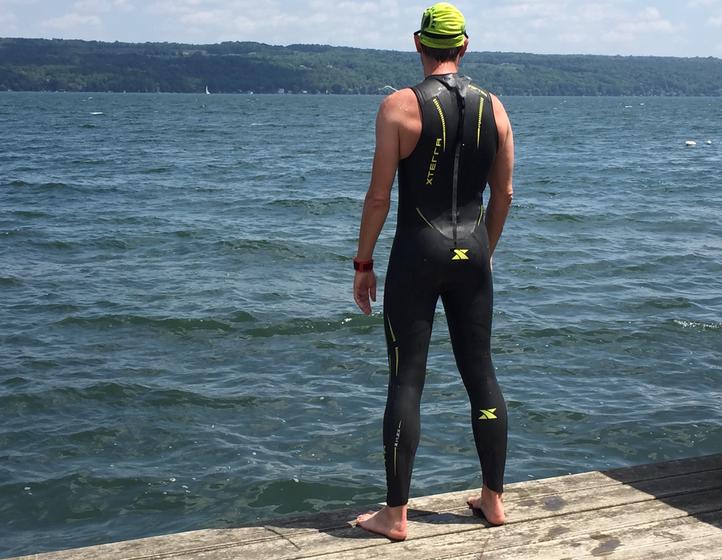 Well, in just a few days I'll step into Cayuga Lake for my first intermediate (Olympic) triathlon! I thought I'd write a bit about my intermediate triathlon training, since I approached this with the same rigor as training for my first 50K and first 50-miler, and that started with a plan. I found an 18-week Intermediate (Olympic) Distance plan from tri-newbies and followed it pretty closely. I did not do the extra workouts in weeks 9-17 mostly due to lack of time, but I feel really prepared for the triathlon based on the whole training cycle! In aggregate, I have 145 hours of training leading up to this event! The Cayuga Lake Triathlon will have me swim 1.5K, bike 24.3 miles and run 10K.

One of the things I really like about tracking my workouts in Strava is the ability to look back and see trends and totals of my training. Charting the amount of time spent each week working out for the 18-week period (plus the week prior), it's clear what the plan accomplished: three building periods, punctuated by fallback weeks (for recovery), a final "quality phase" designed to build speed, and a final taper. In a typical week, there'd be three of each discipline, so yep: a few double workouts each week. Some creative scheduling got it all in, though!

I'm actually looking forward to the swim for the first time since I started competing in sprint triathlons several years ago! Despite the extra distance of the intermediate, my secret weapon is that I've been through Total Immersion with Shane Eversfield. I found that swimming (barring the disdain I have for errant seaweed) is really quite fun and not as taxing as it used to be. I wrote about my experience with Total Immersion, and if you're curious, you should definitely check it out. The plan called for some specific workouts, especially during the quality/speedwork phase. However, I stuck to simply swimming by feel, given my relative inexperience with swimming as compared to running and biking.

I'm so grateful to our friends Kathey and Bruce for graciously allowing us use of their dock and kayaks for lake swimming. That part of the lake has a mostly seaweed-free route! A kayak escort provided additional visibility to boaters and a virtual "buoy line" for me to follow. Amy, my Dad both of my kids are fantastic kayak escorts; I'm so grateful to all of them for the help. It's really nice to have the company, and despite a few workouts with really choppy conditions, I can say that without exception I enjoyed each and every swim! My longest lake training swims (2 of 'em) were 2.4K, well past the 1.5K of the race. In each of those, I exited the water feeling like I had room for more, so that's good. This training cycle included a total of 27 hours of swimming.

Amy and I have really enjoyed the upgraded bikes we bought, mainly for this triathlon (and those in the future). I did most of the training outside, but did do some indoor workouts on a Keiser bike if it was necessary. The longest ride was a 50-miler that Amy and I did together, which was quite fun. There are some really great bike routes between Cayuga and Seneca lakes. I rode a lot on the triathlon course itself, too, between Taughannock Park and Sheldrake.

I did do the quality rides, which called for intervals of 3-6 minutes hard, 2 minutes easy, with a 30-minute warm-up and cool-down. I did these mostly on a three-mile loop around our neighborhood streets, which wasn't as bad as you'd think. The focus on the intervals and effort kept the looping ride from being too boring. The most epic ride I had was a 40-mile day where I decided to stay close to home, since the forecast was sketchy. It rained the WHOLE time, but provided good training for the body and the mind. This training cycle included a total of 80 hours of biking.

I came into this training cycle after a commitment to run a bunch of half marathons. I averaged 25-30 miles a week of running before starting this plan. Running was curtailed quite a bit to allow for building in the swimming and cycling disciplines. Most of my weekly totals were in the mid-teens, with my peak weeks having mileage in the low-20s due to a half marathon thrown in there.

I spent a lot of time on the trails at Taughannock, mostly because I love the effect the vertical has on my training. The triathlon run will be 6 miles, all on mostly flat grass or trail. The quality days for running had me at the high school track doing varying numbers of 880 (half-mile) repeats. These were tough, but I (a) enjoyed them and (b) didn't get injured, which has been a problem in the past. So, chalk one up for a successful training cycle containing running speed work! This training cycle included a total of 37 hours of running.

After the triathlon, I'm taking a week off from fitness, which coincides with VACATION. It'll be nice. However, Corning's Wineglass Marathon looms in the calendar, and there'll be just 8 short weeks to prepare. I'll be jumping into the middle of one of Hal Higdon's famous marathon training plans. I'll bang out 30-40 miles a week, but severely curtail any swimming or biking. I'm looking forward to it, but I'm sure I'll sneak in a ride or swim here and there!